- GBP/ZAR trapped in middle of a sideways market.
- Break of range top or bottom required for new direction.
- Pound to be driven by Brexit news; Rand by economic data.

The Pound-to-South-African-Rand rate was trading at 18.07 Monday after rising more than 0.5% in the previous week, although the rate is set to remain directionless within an established multi-month range during the days ahead.

Sterling gained last week due to market hopes that Brexit day will soon be delayed ck of a more optimistic outlook for Brexit and the Rand fell after credit rating agency Moody's said the South African government's latest budget plan was likely to be "credit negative". 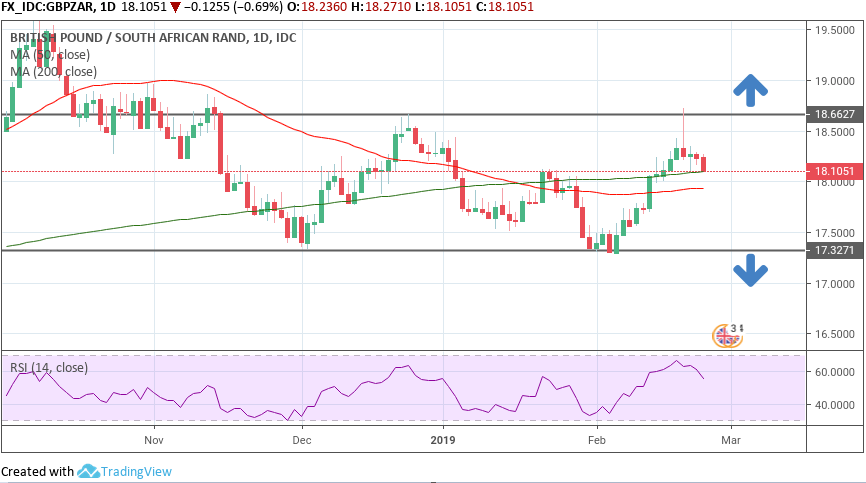 The volatile rise and fall associated with the budget led to the formation of a bearish shooting star candlestick pattern on the daily chart, consisting of a long day's range and short body at the bottom of the range. This is a bearish sign.

The shooting star's location at the highs of a long sideways movement adds further to the bearish set-up for the Pound-to-Rand rate. It could be indicative of a looming turnaround from the recent range highs. A bearish pivot could augur a downward movement back to the range lows in 17.30 area.

Yet at the same time it is still too early to confidently call a reversal in the market. However, we are not bullish either due to the negative appearance of the chart, which makes a breakout above the range highs appear rather fanciful from a technical perspective.

Ultimately the pair is trapped in the middle of a range and this makes future direction very difficult to forecast. A break above 18.75 would open the door for a move up to 19.30. Alternatively, a break below the range lows at 17.29 would probably lead the market all the way down to 16.40.

The longer-term charts are show the 50-month and 200-week moving-averages capping gains just below the range highs. These are added obstacles standing in the way of a range breakout to the upside. 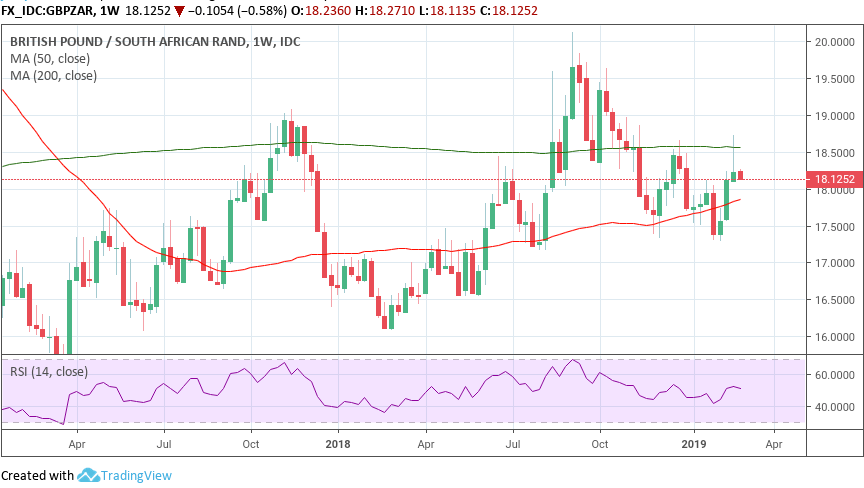 South African Rand: What to Watch

The two main domestic data releases for the Rand in the coming week are the January trade balance and ABSA manufacturing PMI survey for February. Apart from that the currency could be moved by the performance of the U.S. Dollar, to which it is inversely correlated, and spillover effects from last week's budget statement.

The budget reflected an overall more pessimistic assessment of the economy and it's trajectory than had been expected, which weighed on the Rand. The bailout of troubled public utility Eskom, a wider than forecast budget deficit and slower growth were the main problems.

Moody's said after the budget was delivered that the government's latest fiscal plans were likely to be "credit negative", sending the Rand lower, as new financial support for Eskom is not fully offset by other measures and government spending and tax revenue forecasts could easily prove to be too optimistic.

A credit rating downgrade would be disastrous for the Rand as it would see large outflows from the country's debt markets, but this still appears to be the an unlikely outcome from Moody's next rating review in March. Analysts say the agency may just change the outlook on South Africa's rating to negative, which would suggest a downgrade is likely within the next 18 months but not necessarily imminent.

In the coming week the trade balance is likely to show a severe swing to a -R12.8bn deficit in January, from a surplus of R17.2bn in December. The large surplus of the previous month was as a surprise and due to a sudden, sharp, fall in imports more than anything else. An even greater swing into the ‘red’ in February, however, could potentially impact negatively on the Rand. The trade balance is scheduled for release at 13.00 GMT on Tuesday.

The other main release for ZAR is the ABSA Manufacturing PMI survey for February, out on Friday at 10.00. PMIs are important leading indicators for the real economy. In January that ABSA came out at 49.9, which a pip below the dividing line of 50, and unfortunately shows mild contraction rather than expansion.

Brexit focus returns to Westminster this week with the Prime Minister due to make a statement in Parliament on Tuesday and an amendable motion on Brexit is up for debate on Wednesday.

The amendment to look out for is the Cooper/Letwin amendment which if passed (and a linked Bill adopted), would result in the government being directed to request an extension to the Article 50 process, should it not get a deal through Parliament by 13 March.

For Sterling such a bill makes a 'no deal' Brexit less likely on March 29, and therefore its passage would be seen as a positive for the currency.

However, a similar amendment by Cooper failed in January so parliamentarians might still be erring on the side of allowing May the freedom to get concessions from the EU before voting for such an amendment.

Last week Chancellor of the Exchequer Philip Hammond said there was the chance the second, and final, Meaningful Vote on the deal itself might actually take place this week; for this to happen some kind of concessions will need to have been secured from Brussels.

Indeed, it looks like these concessions won't be forthcoming in time for a vote this week and May has told journalists during a flight to a summit in Egypt on Sunday that she intends to hold a Meaningful Vote on the deal by March 12, just 17 days before Brexit.

“If the prime minister, Theresa May, manages to secure legal assurances from the EU on the Irish backstop, there will likely be a meaningful vote on the revised deal. But if UK-EU negotiations have not been completed by then, MPs could simply vote on an amendable motion on how to proceed next with Brexit. The latter carries the risk of Parliament voting to take control of the Brexit process, possibly forcing the government to extend Article 50, if Mrs. May has nothing to show from the latest round of talks with Brussels. Either way, the pound appears to be headed for more volatility.” Says Raffi Boyadjian, a currency analyst at XM.com.

Another key release for the UK currency, is the IHS Markit Manufacturing PMI for February, which is a survey-based activity indicator. This is out at 10.30 GMT on Friday and is forecast to show a drop to 52.0 from 52.8 in the previous month of January. PMI's are important leading indicators for the economy.

The Gfk Consumer Confidence survey is out at 1.01 early on Thursday morning and is forecast to show a -15 result from -14 previously - mainly as the mood sours over Brexit. An even sharper-than-predicted fall in the Gfk could well have negative repercussions for Sterling since declines in sentiment indicators often precede falls in the real economy.