- ZAR to remain range-bound ahead of Federal Reserve decision.

- But a dovish tone could provide USDZAR some breathing space.

The Rand shifted down a gear late last week after an impressive run higher earlier on, although some analysts say downside for the South African currency is likely to be limited during the week ahead.

South Africa's currency had been on a winning streak last week until a series of dire Chinese economic numbers sapped the market's appetite for risk and send the currency tumbling into Friday's close.

However, the Pound Sterling was on its back foot throughout much of the week due to the latest farce in the Brexit saga, which was enough to ensure the Pound-to-Rand rate moved sideways.

"Risk sentiment towards emerging markets broadly improved this week but has been dented by ongoing US-China trade tensions and particularly weak data out of China that exacerbated growth concerns," says Kamilla Kaplan, an economist at Investec Bank, in a note to clients.

December's U.S. Federal Reserve (Fed) interest rate meeting and statement is the headline event for the South African Rand and all other emerging market currencies this week.

The outcome will be key to direction of the Rand in general as well as the Pound-to-Rand rate into year-end, with the decision and economic forecasts set to for release between 19:00 and 20:00 London time on Wednesday.

The Federal Reserve is widely expected to raise its interest rate for a fourth time this year Wednesday, taking it from 2.25% to 2.5%, so investors will take their cues from the FOMC's statement and economic projections.

However, if the FOMC changes its language in a way that suggests policymakers are becoming more cautious about lifting rates then it would be a gift for the Rand.

Likewise, if the so-called 'dot-plot' of members' projections shows the FOMC feeling less hawkish than in September the market response would also be negative for the greenback and positive for the South African currency.

"There is potential for a restrained USD post Fed, which points to some relief for EM assets this week while trade concessions from China and hopes of stimulus following weak data could also help," says Christian Maggio, head of emerging market strategy at TD Securities. 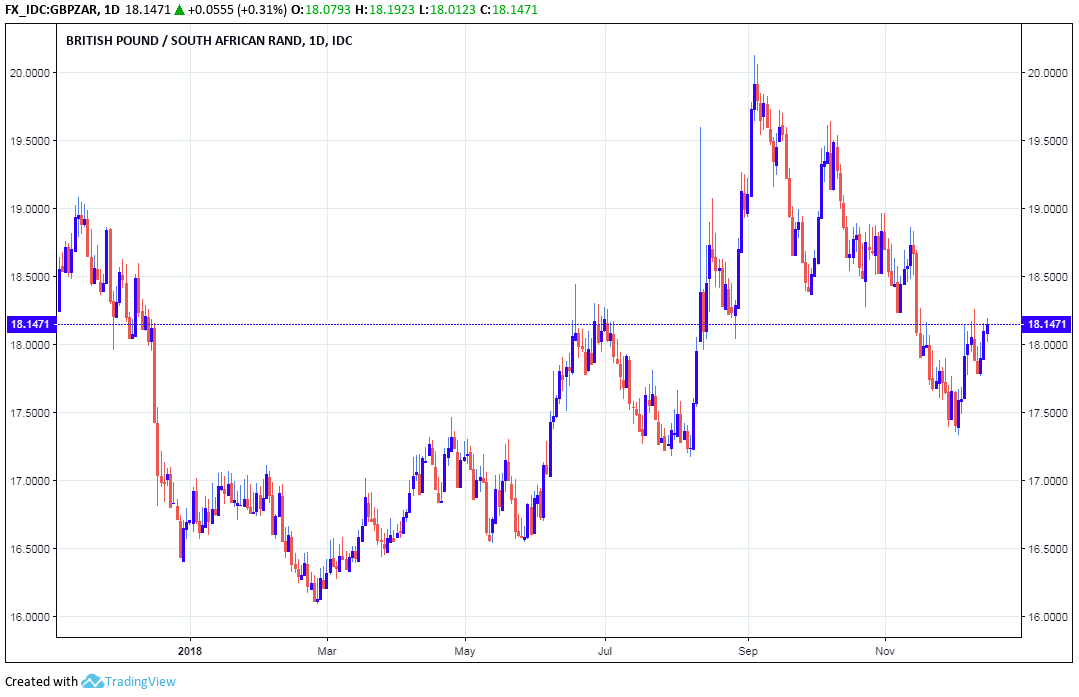 "ZAR now screens 3.8% rich, down from 8.2%," says Abezka Christovova, a strategist at J.P. Morgan. "We retain a bearish view on ZAR as our portfolio hedge to a fragile Emerging Marlet environment." 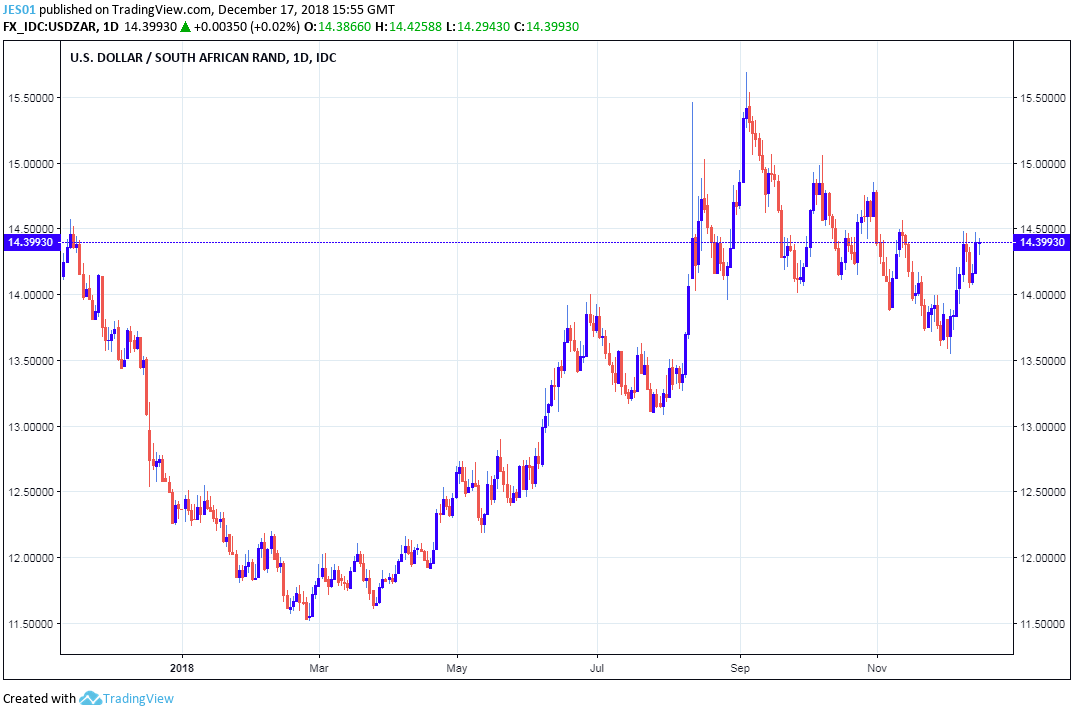 Fed policy has drawn capital out of, and deterred new money away from, riskier emerging markets this year. That put pressure on the Rand, while high oil prices and domestic economic developments have weighed further on the currency.

This compelled the South African Reserve Bank (SARB) to reverse its February 2018 interest rate cut, taking the main policy rate back up to 6.75%, despite the economy having fallen into recession during the summer months.

However, financial markets are increasingly aware of the possibility the Federal Reserve might pause its interest rate hiking cycle next year and observe how the economy responds to higher interest rates.

This could help the Rand to reverse more of its 2018 losss against the Dollar and Pound into year-end, although the currency may be limited in how far it can go over the short-term due to political risks the market will focus on in January.

"The rand can be expected to be influenced by domestic factors in view of the fiscal and political risk factors including the 2019 Budget, sovereign credit rating reviews and the general election," says Investec's Kaplan, of 2019.

The 2019 budget is due in February, with Moody's decision on South Africa's credit rating expected soon after in March. That will then give way to a period of political campaigning for the general election expected to be held in May.

As a result, political uncertainty could mean the Rand struggles to capitalise much on a retreating U.S. Dollar, although Sterling will also be impacted by uncertainty relating to Brexit, clouding the the Pound-to-Rand rate outlook.

Prime Minister Theresa May survived a leadership challenge last week but she still lacks enough support in parliament for her Brexit Withdrawal Agreement to make it onto the statute book.

As a result, the probability of an exit from the EU on World Trade Organization terms could grow further still over coming weeks, weighing on Sterling and the Pound-to-Rand rate.

Fears over a WTO exit have reduced economic data and the Bank of England (BoE) to an afterthought for the market. As a result, Thursday's BoE is not expected to have a lasting impact on Sterling or the Pound-to-Rand rate.