"We would expect a further upward drift in USDJPY toward 132 as we approach the FOMC on February 1, but we expect activity and volatility in the pair to fade out" - BMO Capital Markets.

The Japanese Yen scraped the bottom of the major currency barrel this week and has been tipped for further modest losses into month-end after local inflation ticked higher and the Bank of Japan (BoJ) remained resolute in its view that further policy changes are unlikely to be necessary.

Japanese exchange rates fell more than one percent in the G10 and G20 groupings after local inflation rose in line with economist expectations to an annualised four percent, which left the Japanese Yen sitting at the bottom of the major currency league table for the week overall.

"We would view these reactions as more of a normalization of the market after the crazy JPY appreciation that started a few hours after the BoJ decision and dragged USDJPY from 131.5 down to 128," writes Greg Anderson, global head of FX strategy at BMO Capital Markets, in Friday market commentary.

"That move didn't have any fundamentals behind it other than a bit of USD index weakness that seems to be also passing," he adds.

Anderson says Friday's inflation data does not suggest an acceleration in the pipeline and instead gives credence to the BoJ's view that a change of policy is unlikely to be necessary anytime soon. 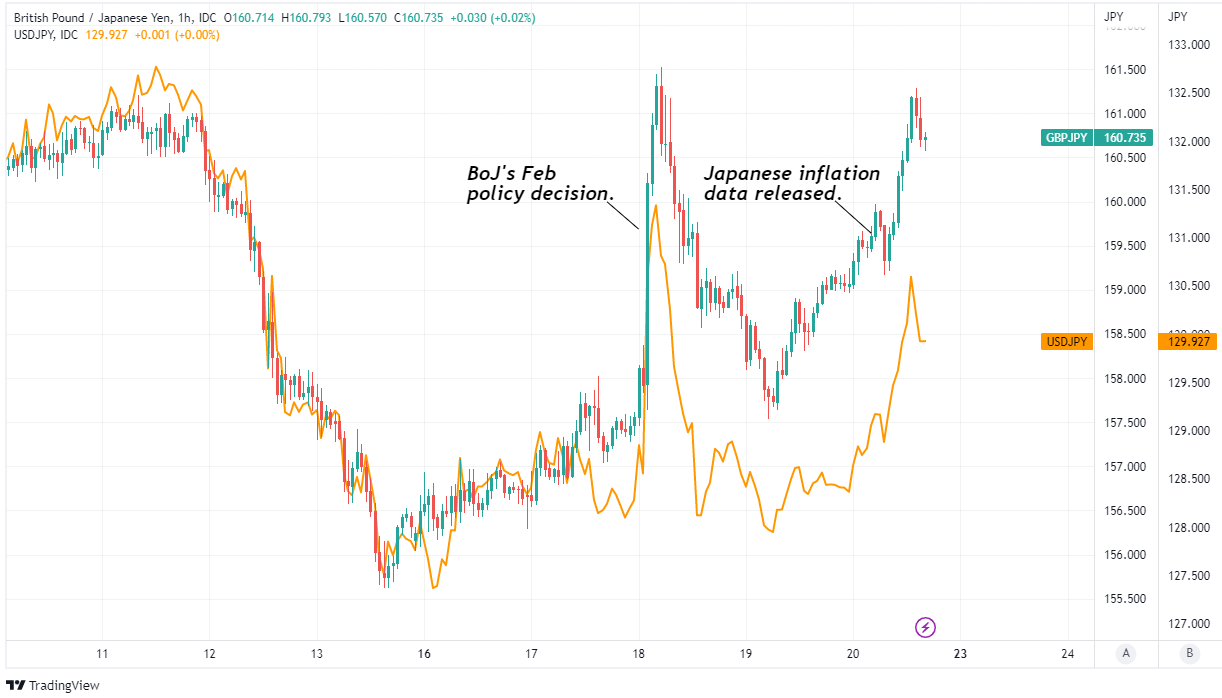 Above: Pound to Yen pair shown at hourly intervals alongside USD/JPY. Click image for closer inspection. To optimise the timing of international payments, you can set a free FX rate alert here.

Meanwhile, Governor Haruhiko Kuroda was reported to have said from Davos, Switzerland that higher inflation and wage growth would be welcome in Japan and that last month's decision to adapt the parameters of the BoJ's Yield Curve Control programme was a one-off action and not the beginning of a cycle.

"That in mind, there is no reason for the BoJ to stop QEing, and with a slight delay, that is what USDJPY is finally beginning to price," Anderson says.

"We would expect a further upward drift in USDJPY toward 132 as we approach the FOMC on February 1, but we expect activity and volatility in the pair to fade out," he adds.

The BoJ had surprised the market in December with a decision to widen the band within which the 10-year government bond yield floats, leading to speculation about further follow-on moves in January and subsequent months, speculation that was proven ill-founded on Wednesday this week.

The 10-year yield target was left unchanged at 0% this week while the recently-widened band within which the yield is allowed to fluctuate was also maintained at 50 basis points on either side of the target, though equally as significant was the BoJ's latest inflation forecasts.

New forecasts had inflation at 1.6% for 2023 and 1.8% in 2024 which, being below the 2% target, undermined market wagers on further policy changes being likely for later this year. 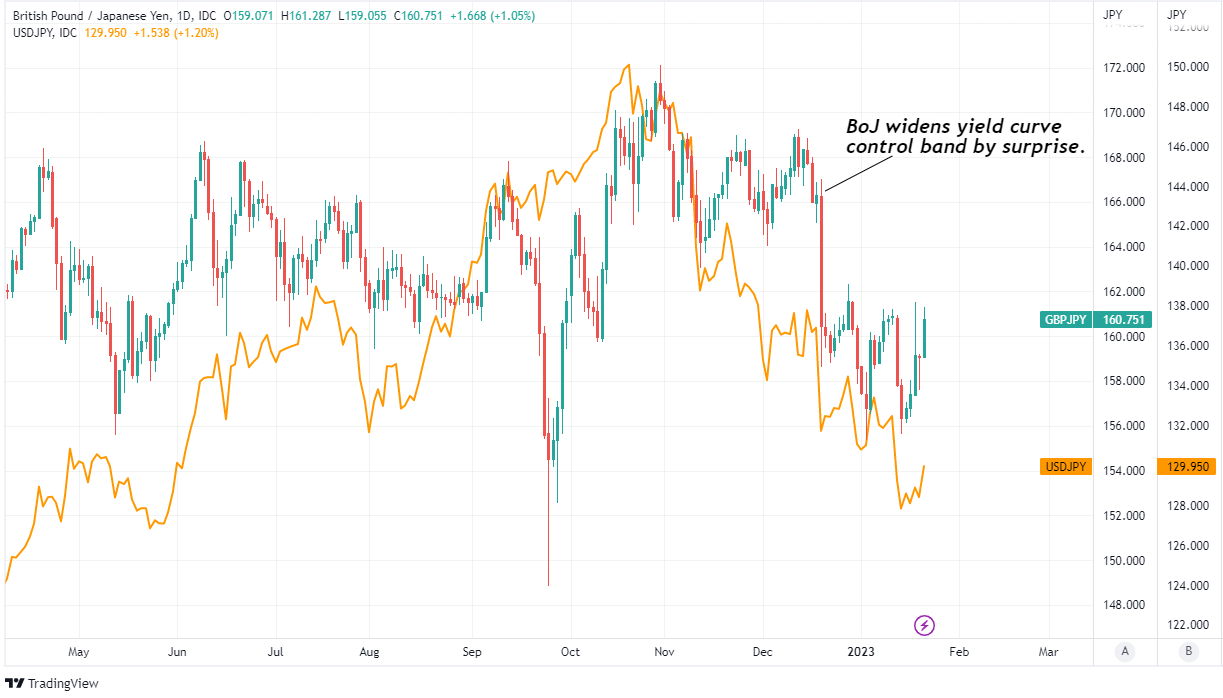 Above: Pound to Yen pair shown at daily intervals alongside USD/JPY. Click image for closer inspection. To optimise the timing of international payments, you can set a free FX rate alert here.

"The likelihood they will continue to press forwards on that [loose policy] front corroborates the notion I have that we may not actually get to any BoJ hikes," says Brad Bechtel, global head of FX at Jefferies.

"For now the market is convinced the new BoJ leadership is desperate to normalize so only after the leadership change will we know for sure, but I get the feeling we may not get to a place where they are hiking," he adds in Friday commentary.

This week's BoJ developments come barely a fortnight away from the February Federal Reserve (Fed) decision and amid potenitally-misplaced speculation suggesting the prospect of U.S. interest rates being cut later this year.

That speculation pushed down U.S. bond yields and helped to lift the Yen in prior weeks but also now leaves the currency at risk from any Fed decision that forces yields and the Dollar higher next month.