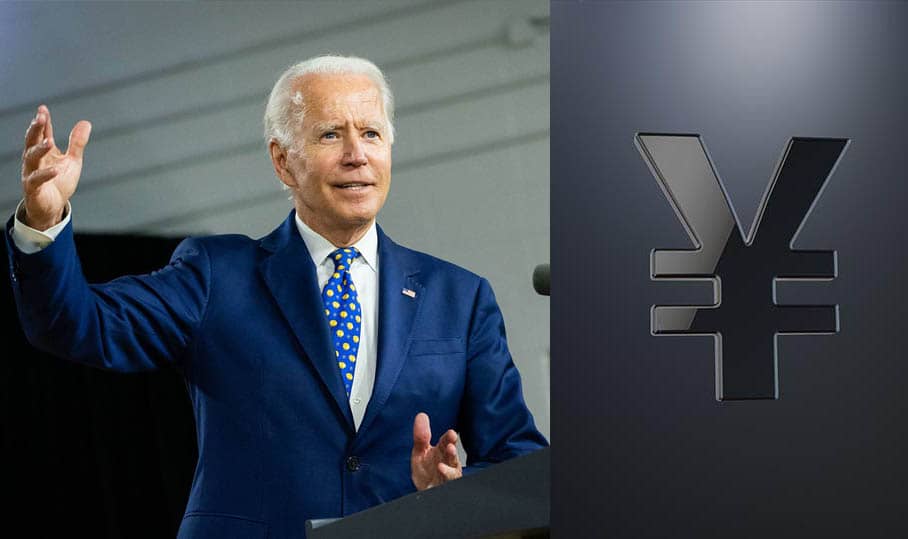 Analysis from SuMi TRUST - one of the largest financial services groups in Japan - have said the Japanese Yen could potentially strengthen should Democrat nominee Joe Biden win the November U.S. presidential election.

According to Naoya Oshikubo, senior economist at SuMi TRUST, a Trump win will preserve the status quo and boost stocks but a Biden win could mean far-reaching changes for Japan.

"A Biden victory may mean very significant changes. Firstly, it could lead to a value reversal in the Japanese stock market. If Biden issues more bonds to finance large scale government projects this could lead to a steeper yield curve with the 10-year US yield rising to 1%. In this scenario the Japanese stock market will likely favour financial stocks, on the expectation that steeper US and Japan yield curves will improve corporate earnings of financial companies given their investments in US and Japanese bonds," says Oshikubo.

"Higher spending by the Democrats, funded by bond sales, will also boost the US economy, leading to wider interest rate spreads. This will in turn push the US dollar higher against JPY, benefiting Japanese exporters and their shares," adds Oshikubo.

The odds of a Biden victory remain elevated with his lead in three key swing states appearing to be stable according to new polls out this week. Three University of Wisconsin/YouGov polls out Monday found Biden leading by 10 points in Wisconsin (52%-42%), 9 points in Michigan (53%-44%), and 8 points in Pennsylvania (52%-44%).

Meanwhile, modelling by FiveThirtyEight shows the Democrats are favoured to take back the Senate this year, regardless of which of the three versions of their forecast you look at.

"If the predicted sweeping win for the Democrats, with victory in the race for the White House and the Senate, occurs then large fiscal projects, which the Democrats have promised, should keep markets excited in the short term. However, higher corporate and capital gains taxes and more regulation in the financial and IT industries could lead the markets to become risk averse in the medium to long term," says Oshikubo.

A second reason to expect a Biden win to have far-reaching impacts on Japan and its financial markets lies with his proposed environmental policies, which SuMI TRUST say could benefit Japanese environmental technology companies with a strong ESG focus due to an increase in demand from America for their products.

"As such, valuations of such companies may rise. Thirdly, while Biden will have a tough stance on China he is likely to take a more concerted, international approach, building a coalition of allied nations to counter China. Japan would be asked to join and commit itself. However, China is an important business partner for Japan so this would create a challenging situation for Japanese diplomacy," says Oshikubo.

Despite polls and prediction markets showing a clear preference for a clear-cut win for Biden and the Democrats in the election, markets continue to betray unease.

“The probability of Trump winning has diminished somewhat, but if we recall 2016 we can’t count him out," says Oshikubo.

It is this unwillingness by investors to fully buy into what the polls are saying - that Biden will comfortably win the vote - which will likely keep stock markets churning between gains and losses and the Dollar bid for at last the next week.

"The U.S. election campaign enters its final stretch. We think the main bias will be for the market to reduce risk and unwind positions when given the opportunity. This could see the USD firm near-term," says Mark McCormick, a foreign exchange strategist with TD Securities in New York.

According to SuMI TRUST, a Trump victory means no real change for Japan and this will also be positive for stocks as it will be seen as ruling out the possibility of higher corporate taxes.

Markets appear to be more concerned with an inconclusive outcome to the vote than which candidate will ultimately win, with fears of a protracted legal battle to determine the winner likely to lead to more short-term Dollar strength. This is particularly the case given the significant amount of postal ballots expected in the 2020 vote, owing to the covid-19 pandemic.

How states tally their postal votes, and when those votes are ultimately counted and the result released, is proving to be a notable potential source of anxiety.

"A final scenario for markets to consider is the case of no clear winner. The election results could take days to be announced, with potential controversy around postal votes. If delays mount, both sides might refuse to accept defeat. Without a clear winner the uncertainty will delay government projects and could well be the worst scenario for the markets. Global stocks would plunge and investors would pile into JPY as a safe haven, causing the USD/JYP exchange rate to fall towards the 100 range. Although the dollar would still remain relatively strong against many other currencies, the yen would as usual be the strongest, creating an intense headwind for Japanese exporters," says Oshikubo.