- Break above neckline now suggests new trend is up

Studies of the charts suggest the pair has formed a bullish reversal price pattern and is beginning a new uptrend. 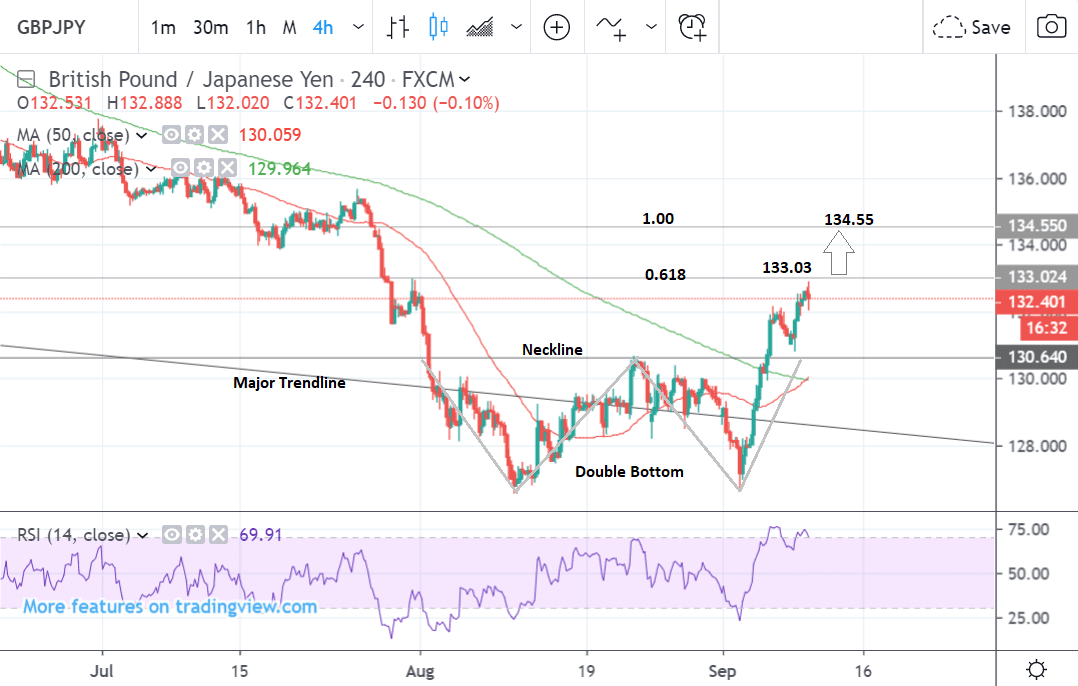 The 4 hour chart - used to determine the short-term outlook, which includes the coming week or next 5 days - shows the pair having formed a double bottom bullish reversal pattern at the level of a major trendline, which suggests the long-term downtrend may be reversing and turning higher.

The double bottom - which looks like a capital letter ‘W’ - has been forming since the beginning of August. The pattern has a ‘neckline’ at the height of the middle peak, which has been broken, signalling the onset of the breakout move higher heralded by the pattern.

The exchange rate has almost already reached the first target at 133.03 - the 0.618 ratio of the height of the double bottom.

A break above 133.10 would provide confirmation of a further move up to 134.55, the next target for the pattern, located at the 100% extrapolation of the pattern’s height.

The daily chart shows the same double bottom at the level of the major trendline and the breakout higher.

The chart includes the next bullish target at the 135.60 July 25 highs, probably reached following confirmation from a break above 134.65.

The RSI momentum indicator is rising strongly, providing further bullish confirmation for the extension of the uptrend.

It is at an even higher level than in early May when the market was trading in the 145s.

The weekly chart shows the pair trading higher after reaching the bottom of what looks like a large falling wedge pattern. 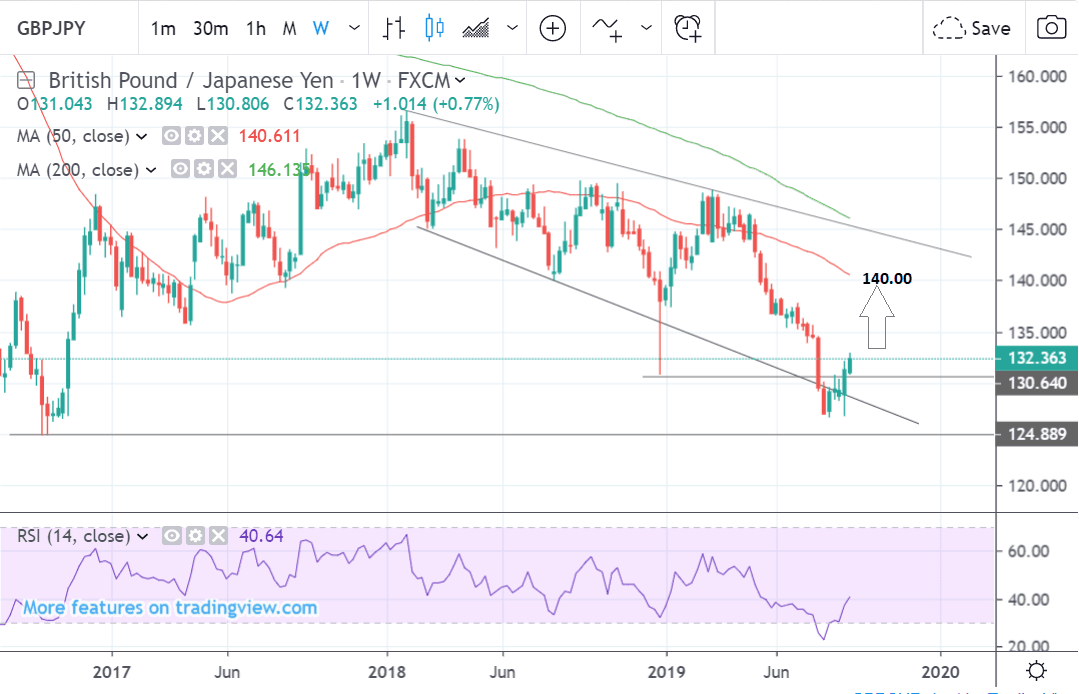 The pair has broken back inside the wedge and now also above the key January lows at 130.70.

Over the long-term, the chart suggests the potential for a recovery, with an upside target at around 140.00.

The Japanese Yen: Improving Risk Trends Turn into a Headwind

The Yen has weakened recently on a combination of slower growth and an easing in global trade tensions following reports relations between China and the U.S. are improving.

“There’s a possibility growth will turn negative in the October-December quarter,” says Izuru Kato, Chief Economist at Totan Research. “If worries about such negative growth deepen, the Bank of Japan could consider lowering interest rates further into negative territory.”

If the economist is right the Yen could weaken since even lower interest rates are negative for the currency as it reduces net foreign capital inflows.

One factor which will probably offset weak growth, however, is the likely conclusion to U.S. - Japanese trade talks in the final quarter of the year.

“A trade deal with Japan will be finished very soon. Citi analysts expect a preliminary trade agreement to be discussed during an extraordinary session of the National Diet, between September and December,” says Citibank, in its daily currency update.

The trade war between Japan and South Korea, however, remains a headwind to growth and looks no closer to resolution. South Korea’s contribution to overall Japanese trade is relatively minor however.

Trade tensions more generally have improved. The U.S. and China have “made a lot of progress” according to US Treasury Secretary Mnuchin, although this would not be the first time he has said so.

More concretely, it was reported that China may have offered to make farm purchases demanded by President Trump. “However, this offer is reportedly contingent on a potential delay to the October 1 tariff increases,” says Citibank.

Other bank analysts are more circumspect about purported breakthroughs in the trade war.

“We remain sceptical that trade talks over coming months will yield a comprehensive agreement that ends the US-China trade tensions. We’ve been down this path so many times over the past 18 months, with hopes of progress ultimately dashed,” says Doug Steel an analyst at BNZ Bank.

Nevertheless, if seasonal trends are to be believed the worst for global risk assets is now over and from here on into the end of the year risk aversion should ease, suggesting a negative backdrop for the Yen and other safe-havens.

Technically gold - another major safe-haven - is bumping up against major resistance and vulnerable to declines.

A volatility indicator called the VIX is also looking like it is about to breakout of a range to the downside, which is further suggestive of an unwinding of tensions and rebound in risk appetite.

These signs from other markets do not particularly support the outlook for the Yen.