The GBP/JPY rate is currently trading in the 144.30 area, about half a Yen down from a week ago, and although the exchange rate remains range-bound on the technical front the charts are giving off signals that suggest a bearish tilt to the outlook.

The Pound-to-Yen pair continues its sideways consolidation from late February's peak, although repeated attempts to break below a clearly defined support level in the 143.70 area add a hint of bearishness to the picture. 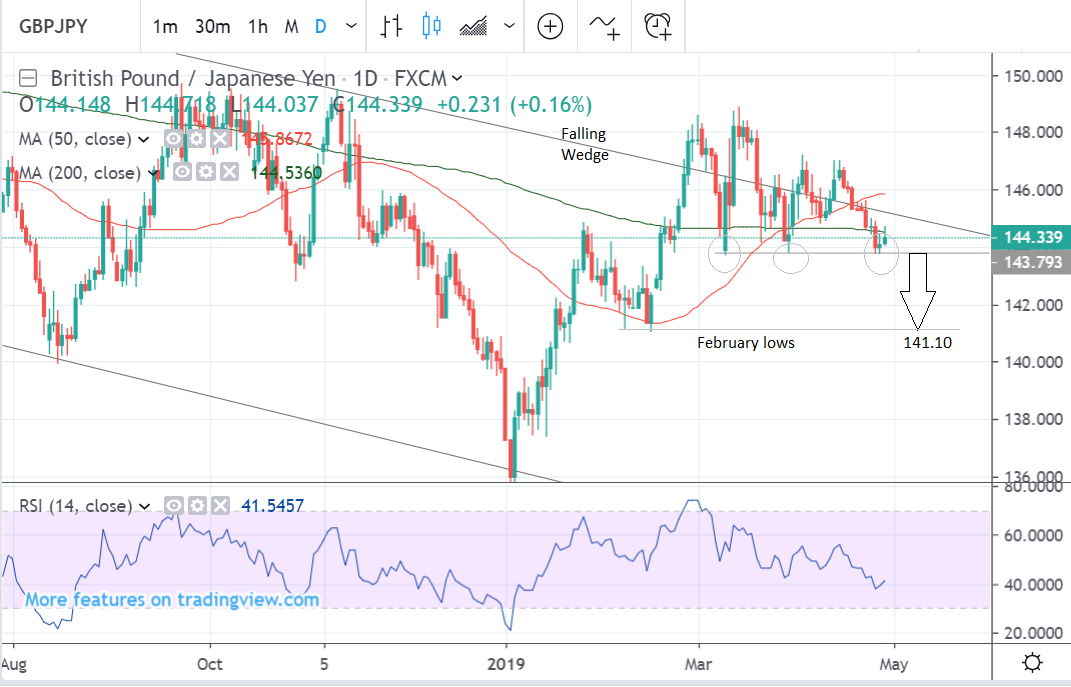 It is often the case that when prices make repeated attempts to break above or below the same level, it is usually successful in the end. Therefore, we see a fairly good chance of an eventual  break below the range floor at 143.70, leading to a move down to a target at 141.10 and the February low.

This could happen in the next 1-3 weeks. Alternatively, as long as the pair remains above the 147.30 level, there is also a chance of a breakout higher.

This appears especially so when considering the possible bullish wedge pattern that may have been forming on the GBP/JPY charts since the beginning of 2018. Upside breakouts from wedges can often result in strong and sustained rallies higher.

A clear break above 149.00, for example, would lead to a continuation higher to an initial target at 151.00 and the 200-week moving average. Such an upward move may even extend beyond that level if the pattern on the weekly chart is a bona fide wedge. 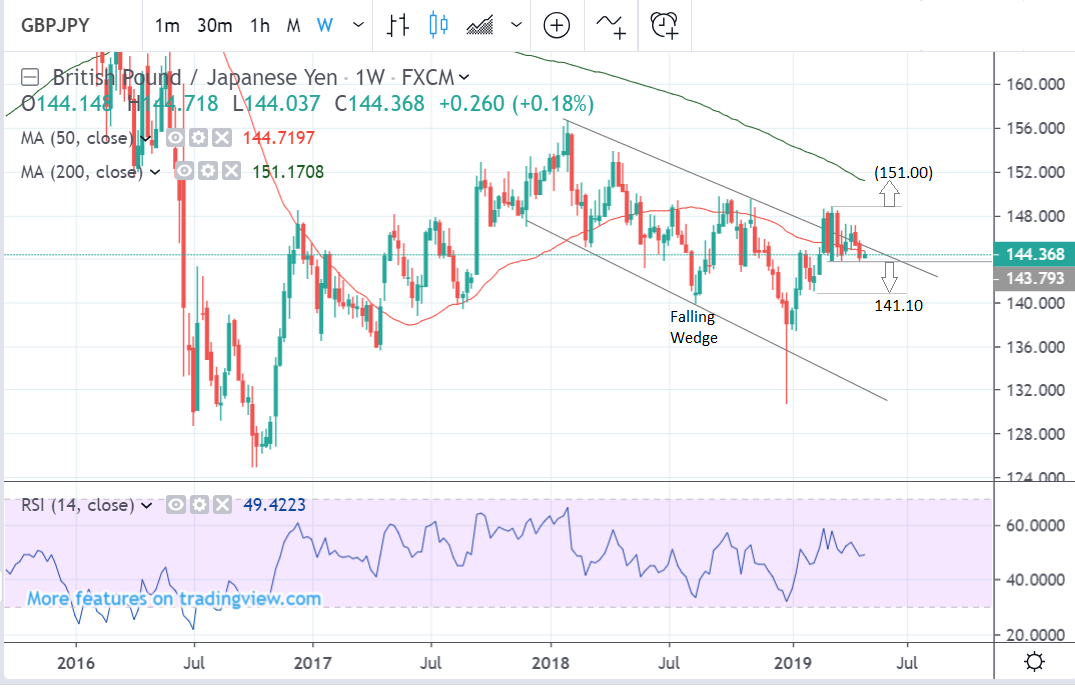 Japanese markets are closed for Golden Week, with the new Emperor Naruhito set to take the throne on May 1, so domestic data will be absent over the coming days.

This leaves risk trends as the main driver of the Yen, which is a safe-haven asset and so appreciates when investors get fearful while depreciating as risk appetites recover.

Chinese data is likely to be a major focus for Yen traders as it is important for market sentiment.

The China Federation of Logistics and Purchasing manufacturing PMI, and the Caixin PMI produced by IHS Markit, are out on Tuesday at 2.00 BST and Thursday at 2.45 respectively. The main question is whether the PMIs can maintain the surprise rebound seen in March.

“Investors should wait before counting their chickens as the official manufacturing gauge (Tuesday) is predicted to stay unchanged at 50.5 in April, while the Caixin PMI (Thursday) is forecast to edge only marginally higher to 50.9,” says Raffi Boyadijian, an economist at FX broker XM.com.

Clearly, a disappointment will weigh on risk sentiment and boost the Yen, which would mean a lower Pound-to-Yen rate, and vice-versa for a stronger reading.

Oil is another major influence on global risk appetite and the Yen. Higher oil prices could easily dampen global growth prospects, while further falls in prices would be positive for the growth outlook and for risk appetites.

“At present, all signs point to higher oil prices. If no real additional oil is brought onto the market, shortages will become visible within months. Statements made by U.S. president Trump and U.S. Secretary of State Mike Pompeo that Saudi Arabia and the UAE will add supplies to counter the loss of Iranian volumes are currently only wishful thinking, and not based on any hard promises from Riyadh or Abu Dhabi,” says Dr. Cyril Widdershoven a global energy expert writing for oilprice.com.

The Saudi’s are unlikely to open their taps to fill the gap left by Iran as there is more of an incentive to keep oil prices higher, says Widdershoven. Oil at current or higher prices is a ‘goldilocks’ situtation for Saudi Arabia’s economic diversification goals.

“For Saudi Arabia, additional production increases are not needed. The current price and production levels are sufficient to support the ongoing economic diversification plans, stabilizing the position of Crown Prince Mohammed bin Salman. Oil market stability has also generated enough positive sentiment in the market that NOCs like Aramco are able to enter the international bond market by force. Low cost financing is an attractive tool for Saudi Arabia and the UAE to boost their economies in the short run,” says Widdershoven.

The Pound: What to Watch This Week

The main event for the Pound is the Bank of England (BOE) rate meeting which will end with an announcement on Thursday at 12.00 BST.

The BOE is not expected to raise interest rates at the meeting despite robust economic data. Actual growth remains subdued at 1.2% (the weakest since 2009) due to business uncertainty going "through the roof" because of Brexit, so it is unlikely the Bank will want to change rates until after more clarity emerges.

Despite talk of a ‘grab and go’ rate hike in August, Reuters polls forecast rates will not move until early 2020, a calendar quarter later than was forecast a month ago.

The hunt for a new governor to replace Carney in October adds more uncertainty to the mix.

The BOE will publish its quarterly inflation report at the May meeting which includes the latest economic projections, and this is likely to garner more attention than usual - and possibly produce more volatility.

The pound is unlikely to see a big reaction to the BOE decision but any dovish tilt by the Bank - dovish meaning in favour of lower interest rates - could weigh on Sterling, which slipped to 10-week lows versus the US dollar this week.

Lower interest rates or the threat of them can be negative for a currency because they detract from foreign investment inflows, which tend to favour jurisdictions which can offer higher interest returns.

The other major release in the coming week are the release of PMIs for April. These may be closely watched as they recently declined in contraction territory which is defined as a reading below 50. They are seen as a forward indicator for the economy so this raised concerns softer official economic data is coming.

Although official UK data has not yet followed in their footsteps, another gloomy set of PMIs could increase the risk it will.

The Manufacturing PMI is out on Wednesday at 09:30 B.S.T.

In March the PMI rose because of stockpiling by companies preparing for a potentially distruptive Brexit, rather than due to genuine growth. The number expected by markets is 53.2, down from the previous month's 55.1.

Construction PMI fell to 49.7 in March and is forecast to rebound to 50.4 in April when data is released at 9.30 on Thursday.

UK services PMI is the big number to watch as this is a sector that accounts for over 80% of UK economic activity.

The previous month saw the Service PMI plunge below 50 and into contractionary territory in March, falling to 48.9, but data out on Friday at 9.30 is expected to show a rebound to 50.4 in April. If it disappoints the Pound could suffer.

Brexit could also still be a driver of the Pound in the week ahead. Talks between the government and the opposition Labour party have not reportedly made much progress. At the same time pressure is building on the Prime Minister, Theresa May, to resign. If she does go, the Pound will weaken.

On the other hand, the announcement of a joint deal with Labour could lead the way to a stronger Pound. Yet this seems unlikely given the UK’s adversarial political system which does not favour bi-partisanship.

There seems little incentive for Labour to help the Conservatives out of their current self-destructive, death-spin over Europe. If anything there is probably more chance of greater uncertainty in the short-term, not less, as Corbyn is more likely to bide his time and watch the Conservatives be their worst enemy than help Theresa May out of her current deadlock.