-US retail and core-retail sales grow just 0.3%, lower than forecast.

-But upward revisions to earlier numbers from March save the day.

The US Dollar continued its climb higher against a basket of developed world currencies Tuesday even after retail sales numbers for the month of April missed economist expectations, as markets took their lead instead from the latest leg higher in American bond yields.

Total US retail sales grew by just 0.3% during the April month when markets had been looking for a larger 0.4% rise, although the disappointment was tempered somewhat by an upward revision of the March number, from 0.6% to 0.8%.

Core retail sales, which exclude large ticket items like automobiles from the figures because of their distortionary effect on underlying trends in consumer spending, also rose by just 0.3%. Economists had looked for a 0.5% rise although the disappointment here was also partly offset by an upward revision of the March number from 0.2% to 0.4%.

"US retail sales made a solid but unspectacular start to Q2," says Andrew Grantham, an economist at CIBC Capital Markets. "There was little sign within the detail that colder than normal weather dampened sales, as clothing (+1.4%) and building materials (+0.4%) both actually made gains on the month."

Markets care about retail sales numbers because they are a leading indicator of demand within an economy, which is itself important for consumer price pressures. It is inflation that central banks are attempting to manipulate when they tinker with interest rates, which are of course the raison d'être for most moves in exchange rates.

"Overall, these are solid figures, particularly given the upward revision to March, which supports our forecast that consumer spending is accelerating again in Q2 after a sluggish first quarter. However, the numbers are unlikely to move markets much today," Grantham adds.

Changes in interest rates, or hints of them being in the cards, are only made in response to changes in domestic inflation but impact currencies because of the push and pull influence they have on international capital flows and their allure for short-term speculators.

"The greenback rally is back in the saddle and could at least extend back to the recent highs if that 10-year benchmark finally makes a statement and punches through above 3.05%. Would expect the rally to be steepest versus EMs, which tend to dislike USD strength and higher US long yields," says John Hardy, chief FX strategist at Saxo Bank. 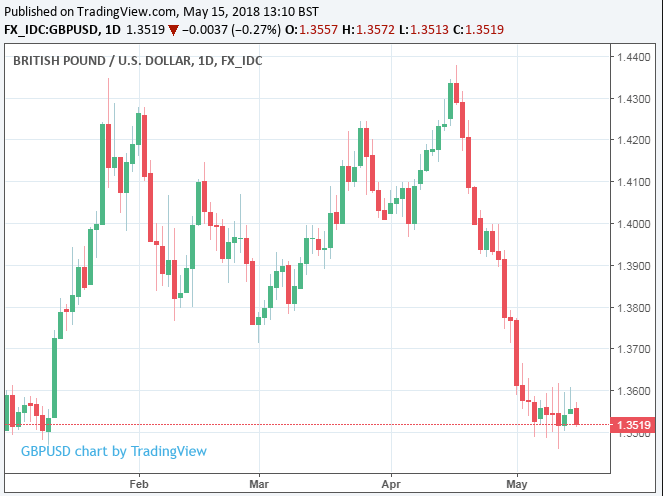 The greenback was also stronger against all other developed world currencies at noon. 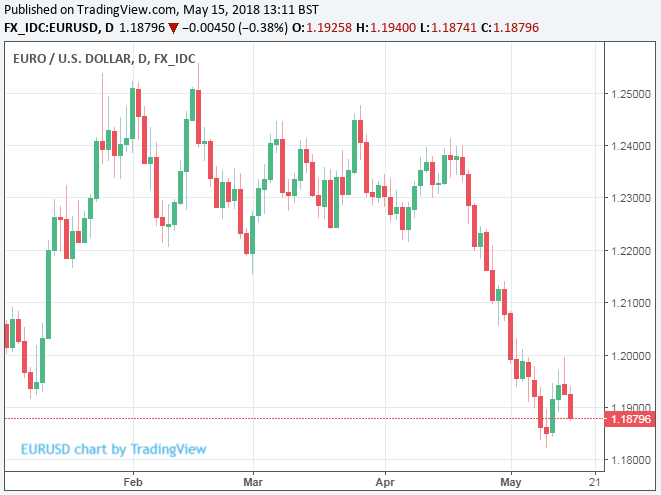 Tuesday's data comes amid an extended run of gains for the greenback in the last three weeks, brought about by shifting interest rate dynamics in global bond markets, which have seen US 10 year yields reach multi-year highs above the 3% level. 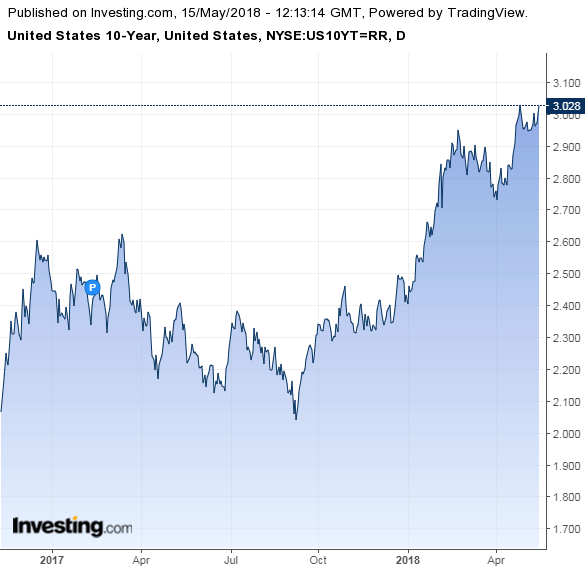 Above: US 10 Year Government Bond Yield.

This has had the effect of lifting the incremental return that investors can earn from buying American government bonds over their developed world alternatives, creating an incentive for so called carry traders and speculators more generally to sell the rest of the G10 basket and buy the US Dollar.

Much of the rise in yields has been the result of an increased supply of American bonds on the market, rising inflation and earlier speculation the Federal Reserve might raise rates at a faster pace this year. However, the Fed has since said that it is minded to view any sudden increase of inflation further above the 2% target as a temporary and transitory phenomenon that will fizzle out of its own accord without requiring a faster pace of interest rate rises.

Meanwhile, few analysts see higher bond yields that are brought about by fears over debt sustainability as providing a compelling reason to own the US Dollar over the medium term, suggesting the greenback's ongoing rally may itself be a "transitory event. However, the bond market moves did render the sheer weight of earlier bearish bets against the greenback, which drove the Dollar index down by more than 12% in the year to the end of March, unsustainable.

So of course, what matters now for markets is whether US yields continue to rise and if the US Dollar continues to follow them. Some say the Dollar's days in the sun are already numbered.

"The USD is working through its last stage of the positioning squeeze that we think is set to slow. Today's bump mostly reflects the oil-induced spike in rates and the steepening of the US yield curve," says TD's McCormick. "