Now could be a good time to bet on a more sustained decline in Pound Sterling.

Foreign exchange strategists at Deutsche Bank say they see value in chasing GBP/USD lower and have in fact made such a bet their “trade of the week”.

“As British politics enters post-election paralysis with a severely weakened May government muddling through, we continue to see the risks skewed to a disruptive and highly negative outcome from Brexit negotiations, rather than towards the government adopting a softer Brexit approach,” says Robin Winkler, a foreign exchange strategist at Deutsche Bank.

The call comes despite Sterling remains robust against the Euro and Dollar but is seen suffering against the currencies of countries with high interest rates - such as the Australian and New Zealand Dollars.

The GBP/USD has benefited from broad-based Dollar weakness which has allowed it to remain in a 1.27-1.30 range since mid-April.

But, politics and economics are likely to see the Pound ultimately succumb to lower levels.

“Coupled with a gloomy outlook for the UK economy as real incomes fall, we remain bearish on sterling,” says Winkler.

“Despite a surprisingly hawkish BoE last week, cable remains expensive to front-end rate spreads (Figure 1), and positioning remains moderately long on Corax (Figure 2) and only marginally short on the IMM.” 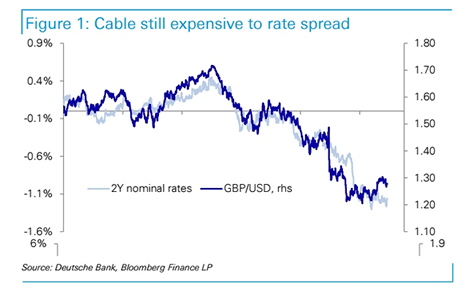 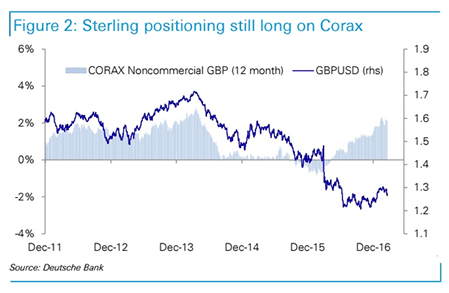 The Pound benefited as the Bank of England voted 5-3 to keep interest rates unchanged, but with three votes going towards an interest rate rise, market complacency was exposed.

Deutsche Bank don’t see this view gaining further traction and reckon Sterling will go lower and have a target set at 1.25.

The strategic call to sell GBP/USD is largely based on the house-view held by Deutsche Bank that the Pound is likely to suffer amidst ongoing political uncertainty.

We reported last week that Deutsche Bank’s George Saravelos had briefed clients that the political landscape in the UK leaves the country vulnerable to a ‘muddled Brexit’.

“We view this development as particularly negative for Sterling and we reiterate our bearish FX view,” says Saravelos, who adds:

“The Prime Minister does not have the political capital to change the existing Brexit negotiation guidelines as she would be at risk of alienating the left or right of the party. The conclusion is that we are highly likely to end up in a period of acute political paralysis in coming months."

Yet, the timelines to agree a deal with Brussels are fixed and the more decisions are delayed.

The greater the risk that there is no time left to negotiate something non-disruptive, as suggested by the EU’s chief negotiator Barnier on Monday, June 12.

Saravelos reckons that a paralysed political class in the UK means pressure from the Europeans and/or markets will likely be required to align politics towards a decision.

This could happen either:

(i) via Europeans elevating the pressure even more and threatening “no deal” in the hope of a second referendum or an even friendlier election outcome, or

(ii) via economic and market pressure as uncertainty rises as the Brexit departure date approaches, forcing clarity to avoid a deep recession.

“The key point is that things will probably need to get worse before they get better - without a crisis, negotiations are simply likely to stall until the “hard” 2019 departure date,” says Saravelos.