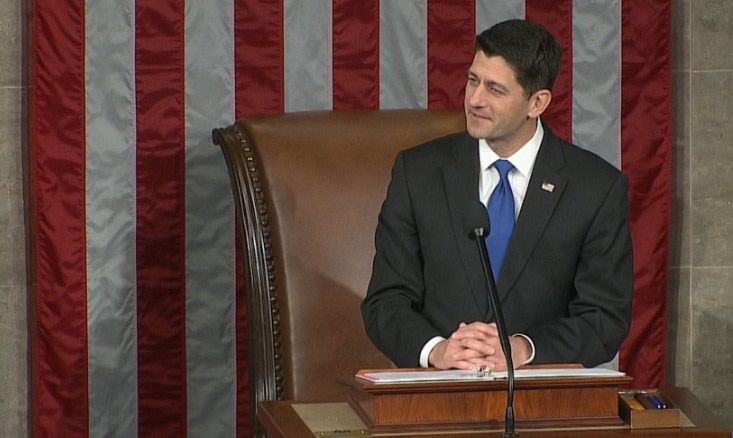 Above: Speaker of the House of Representatives Paul D. Ryan concedes President Trump's plans for healthcare reform do not have the required supporters to allow them to pass into law.

A bout of fresh US Dollar weakness characterises foreign exchange markets at the start of the new week as traders take stock of the failure of Donald Trump to implement his healthcare reform agenda.

The US healthcare bill failed to pass through the US Congress on Friday, March 24 in a sign that the new US President's ability to pass market-friendly legislation in the future - that would support the Dollar - is not as assured as markets initially assumed.

The Pound to Dollar exchange rate has rallied to a one-month high a 1.2543 on the back of these political proceedings in the United States.

Initial optimism that Trump’s bill - that sought to repeal the Affordable Healthcare Act - would be a pivot to key tax reform gave way to the realisation that “very big” tax cuts were now questionable.

For one, the savings from a repeal of the Affordable Healthcare Act - popularly known as Obamacare - were required to fund the expected tax cuts.

Second, the ability of Trump to work with his lawmakers now looks questionable.

Leader of the House Representatives Paul D. Ryan pulled the bill that sought to repeal the Affordable Care Act before it could go to the vote having conceded he did not have the required majority to proceed.

We wrote ahead of the event that the Healthcare bill’s failure to pass posed a notable threat to the US Dollar and the selling pressures seen on the USD at this juncture supports these expectations.

“Markets have come under significant selling pressure as investors are beginning to doubt the potential pace of US economic fiscal policy reform,” says Hans Redeker at Morgan Stanley.

The outcome of the vote on the Obamacare repeal bill is seen by some commentators as an important data point allowing markets to make a judgement on the ability of the US government to deliver on other reform projects, particularly on taxes and banking sector reform.

“The current high valuations in equity markets, particularly on US cyclicals and financials, may be at risk,” warns Redeker.

Valentin Marinov, Head of G10 FX Strategy at Credit Agricole thinks the latest developments give reason to be somewhat less bullish the USD over longer-term.

"In that we remain quite selective when it comes to extrapolating the USD uptrend from the last four years into the future," says Marinov. "In particular, we note that, according to our long-term fair value model G10 VALFex, the USD already looks quite overvalued vs SEK, EUR, JPY and GBP and that should limit any future gains."

Looking ahead, the Dollar has final Q4 GDP to contend with on Thursday alongside initial jobless claims.

Pound’s Strength Against Dollar to be Contained

Despite Sterling’s latest bounce against the US Dollar, “the market remains confined to a well defined downtrend while it holds below the December 2016 peak at 1.2775,” says a note from LMAX Exchange.

Analysts believe rallies should continue to be very well capped into the 1.2500-1.2600 area, with only a break above 1.2775 required to compromise the bearish structure.