Sterling came under further substantial pressure against all currencies from the Asia open on Sunday evening in an evident follow-through response to a UK government economic plan that has significant implications for many things but especially the UK government bond market.

"With the new fiscal package of tax cuts, gilt yields are hitting new highs and the cable [GBP/USD] is selling off. This is because more demand will depress real rates [inflation-adjusted yields] in the UK, if not accompanied by productivity gains," says Chester Ntonifor, chief FX strategist at BCA Research.

"We are maintaining our long EUR/GBP trade. On cable [GBP/USD], downside remains but we will be buyers at 1.05," Ntonifor said on Friday.

It's doubtless highly relevant that HM Treasury is asking the market to accomodate an exceptionally large increase in government debt supply at a time when the Bank of England (BoE) is about to become an active seller and when there is already a perception that interest rates are not high enough. 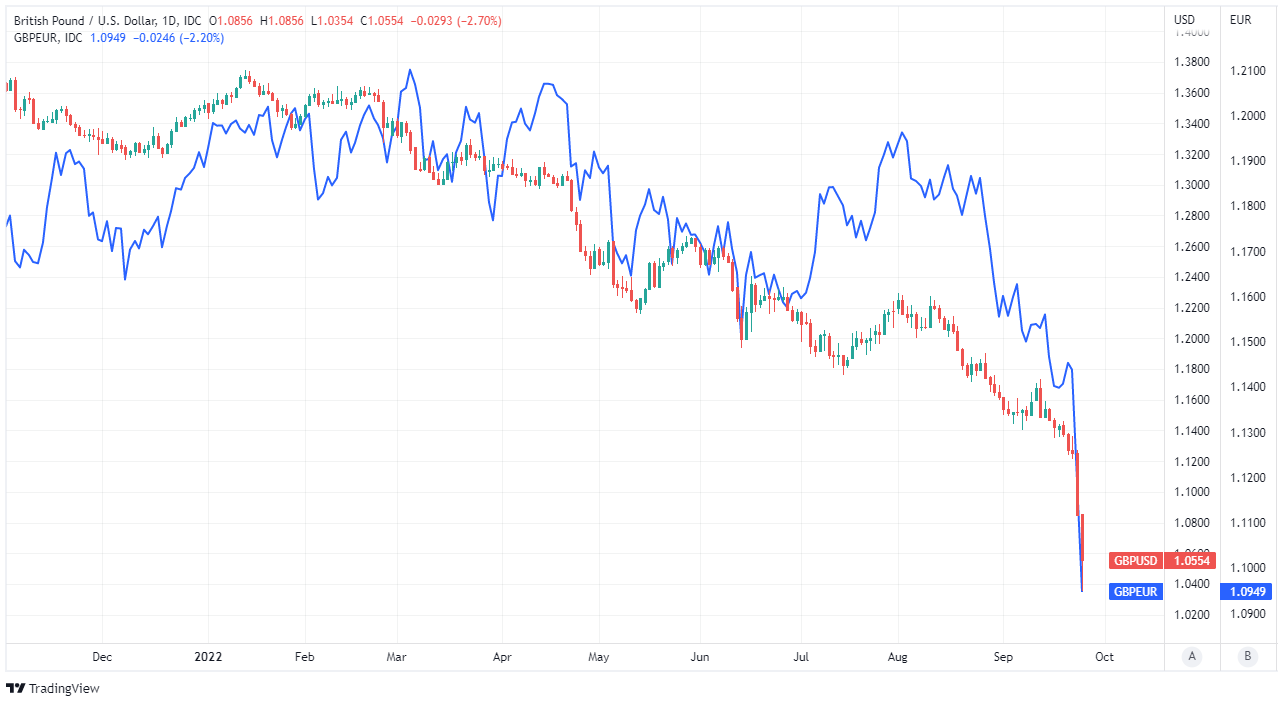 Above: Pound to Dollar rate shown at daily intervals alongside GBP/EUR. Click image for closer inspection.

One way in which this conundrum can be resolved, and does already appear to be being resolved, is through a process whereby investors demand lower Sterling exchange rates and lower asset prices to boot in order to enhance their potential returns sufficiently enough for them to play ball.

This hunt for a new and happier equilibrium is not the kind of process that would be likely to go on for very long, and is the kind of thing that should be over within a relatively short space of time, which is one reason for why the Pound-Dollar rate may already have fallen as low as it's likely to.

Another reason is that from Monday's open in London, the Pound will be trading at what is already a substantial -21% discount to its 2022 starting levels even before the Bank of England has a chance to formulate an interest rate response to Friday's budget and the resulting depreciation of Sterling.

"The sharp depreciation of sterling in response to these tax cuts suggests that most households will be worse off as a result of the announcements. In trade-weighted terms, sterling dropped by 2.0% on Friday," says Samuel Tombs, chief UK economist at Pantheon Macroeconomics.

"The Committee has scope to ignore the medium term boost to CPI inflation from sterling’s depreciation, given that it forecast in August that CPI inflation would drop to just 0.8% in three years’ time if it raised Bank Rate to 3%. The MPC still has more work to do, but we still see 3% as the terminal rate in this hiking cycle," Tombs said on Monday. 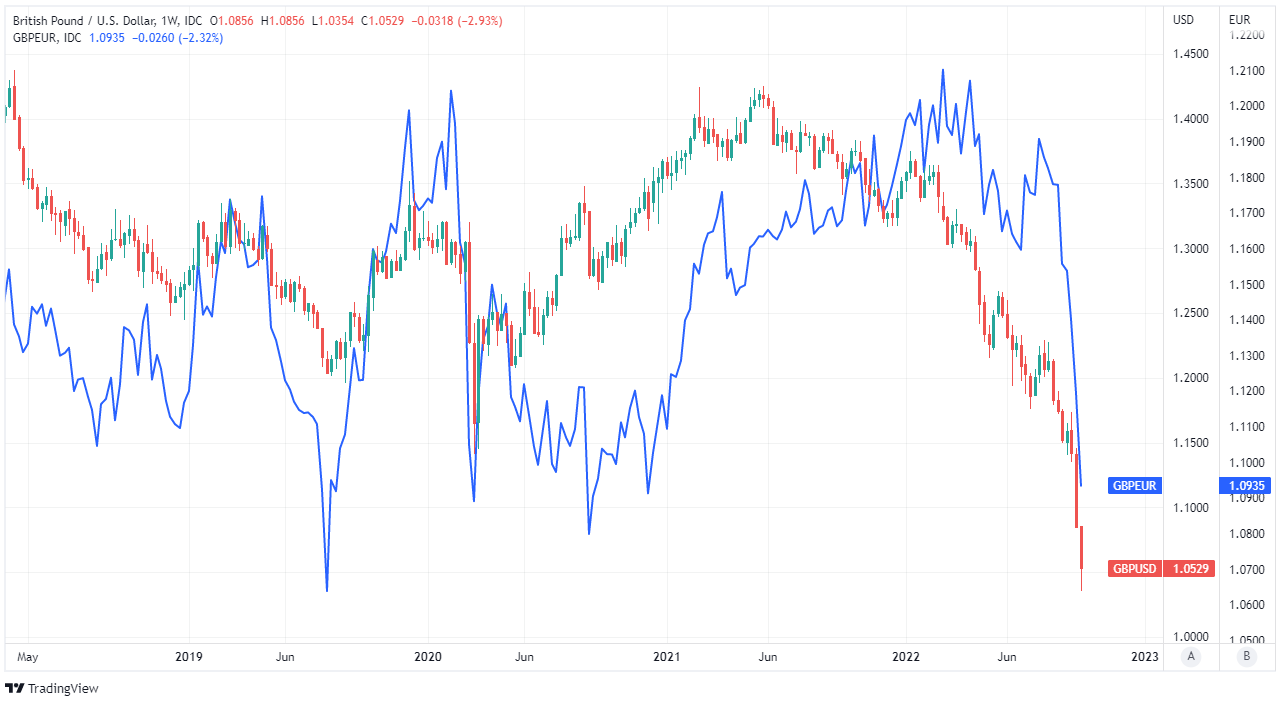 Above: Pound to Dollar rate shown at weekly intervals alongside GBP/EUR. Click image for closer inspection.

The BoE raised Bank Rate by half a percentage point to 2.25% and warned just last week that it would "respond forcefully" to anything that threatens to lift inflation any further and this is one of things that the large fiscal giveaways contained in last Friday's budget will be at risk of doing.

It's for this reason that policymakers at the BoE could be likely to respond by lifting Bank Rate aggressively following their next meeting in November and there may even be a risk of that meeting being brought forward as soon as this week or next in light of the market's response to the budget.

This kind of a scenario would potentially be supportive of Sterling and could help GBP/USD stabilise if the BoE's response is seen as sufficient.

"Today’s fiscal measures are at least sufficiently large to make it hard to forecast a deep recession over the coming two years. This has potential to at least stabilise sentiment," says Paul Robson, Europe head of G10 FX strategy at Natwest Markets.

"However, our confidence levels are low given how bearish sentiment has become. So while a move to parity remains a “risk case” rather than a “base case” for GBP/USD, the chances of such a move are rising," Robson and colleagues wrote in a Friday research briefing. 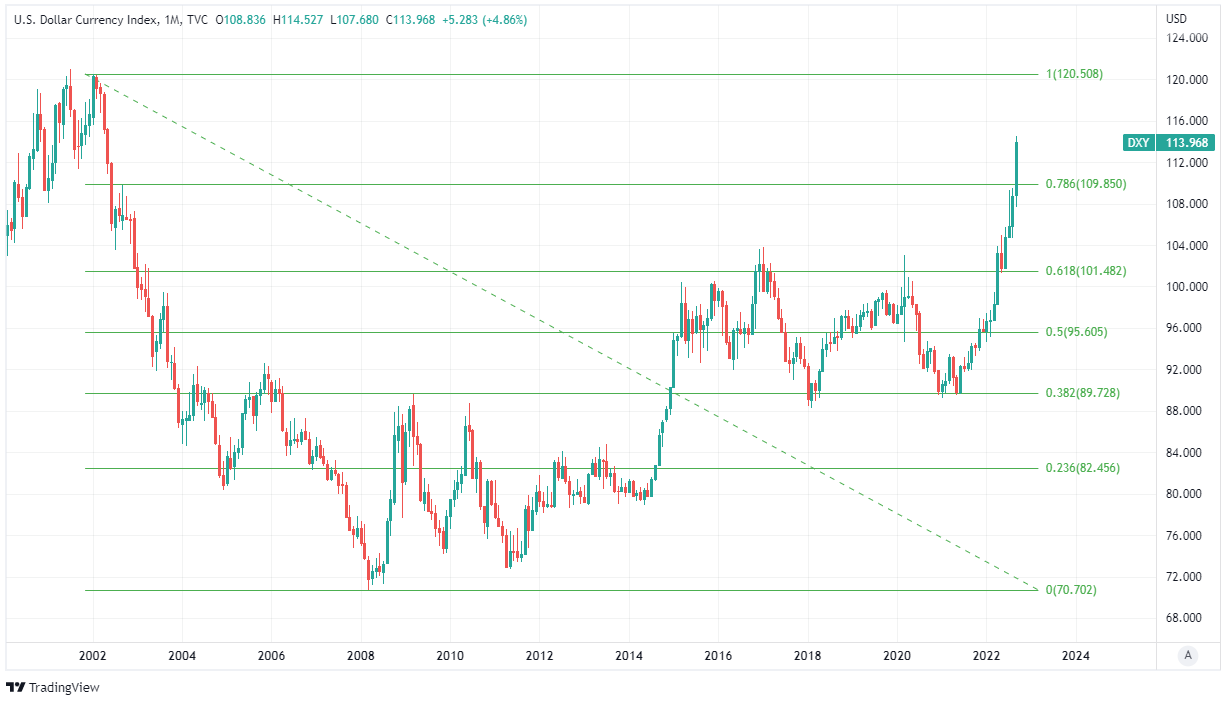 Much about the outlook for the Pound also depends, however, on the market's appetite for a Dollar that rose aggressively to new highs against many currencies last week.

"Stock prices plunged to the lowest level of the year on Friday and market yields staged another leap upward in anticipation of a string of additional rate hikes," says Bob Schwartz, a senior economist at Oxford Economics.

"The Fed’s steadfast mission to control inflation is underpinned by fears of a wage-price spiral reminiscent of the 1970s. But the labor/employer dynamic is much different today; by looking to the past the Fed runs the risk of hiking rates more than is necessary to accomplish the task," Schwartz said on Friday.

This was after the Federal Reserve (Fed) lifted the top end of the Fed Funds rate to 3.25% and warned that significant further increases are still likely, with rates projected to rise above 4.5% at some time next year.

The Dollar built further on already large gains following the Wednesday decision and will likely be sensitive this week to the remarks of a long line of Federal Open Market Committee members who're set to speak publicly ahead of Friday's release of the latest Core PCE price index.

This is the Fed's preferred measure of inflation and the highlight of the U.S. calendar for the week ahead.