The overwhelming topic in FX circles at the start of 2022 is the underperformance of the U.S. Dollar, which has left many an analyst and seasoned market participant blushing.

After all, being pro-Dollar was an overwhelming consensus amongst the investor community and analyst community heading into 2022.

The thesis was the U.S. Federal Reserve would respond to inflation by hiking interest rates, in turn pushing up yields paid on U.S. government bonds right across the curve; i.e. short-dated bonds right through to longer-dated bonds.

This is a classically supportive fundamental dynamic for the Dollar.

The Fed has not only stoked expectations for higher rates in 2022, they have also warned they could reverse their quantitative easing programme towards the end of the year in order to combat hot inflation levels. 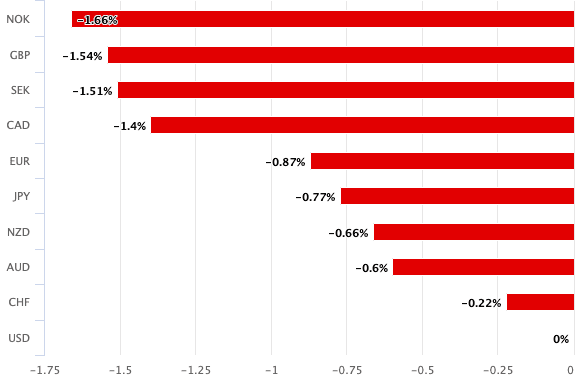 So why is the Dollar underperforming?

Certainly, a clean out of the crowded 'long dollar' trade can be identified: the market was heavily positioned for further advances in the currency heading into 2022, leaving it at risk of a position clean out were a counter-trend move to occur.

This is playing out, but perhaps the bigger issue for the Dollar right now is more fundamental in nature.

The minutes to the Fed's December policy meeting said officials were now looking at actively reversing the quantitative easing programme, a process whereby it either opts to not reinvest expiring bonds, and/or actively sells bonds it has already purchased.

This quantitative tightening will be discussed over coming months said Fed Chair Jerome Powell when he appeared before the Senate for his reappointment hearing.

"With tighter monetary policy on the horizon, market attention has turned to possible reductions in the Fed's asset holdings, which total nearly $9 trillion at present, up from $4.2 trillion before the COVID-19 pandemic," says Jay H. Bryson, Chief Economist, Wells Fargo Securities. 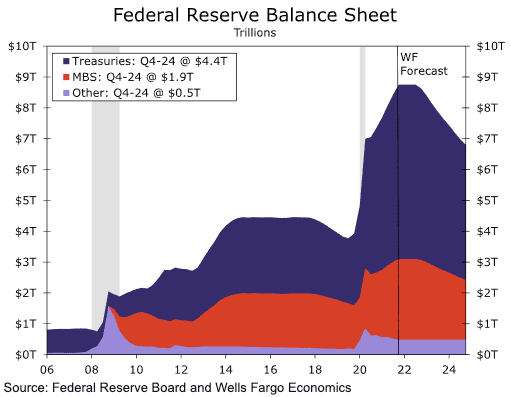 Quantitative tightening matters greatly, purely for the fact that it complements and enhances the Fed's agenda of tightening monetary conditions.

"Our baseline assumption is that the Federal Reserve will announce balance sheet runoff at the September 2022 FOMC meeting, with the actual runoff beginning one month later in October," says Bryson

Crucially - for the Dollar - once quantitative tightening begins the pressures to raise rates further and faster begins to ease.

If the currency market is obsessed about how high and how quickly rates rise, then a programme that starts to limit the extent of future interest rate and yield levels then becomes an issue for the bullish Dollar thesis.

Foreign exchange theory suggests that should longer term bond yields be elevated sufficiently relative to shorter-term yields a 'curve' is created in bond markets that is supportive of the Dollar.

But should that curve start to flatten then it becomes less supportive to the Dollar: this is what quantitative tightening does.

"The failure of the dollar to advance may also be explained by the relatively poor performance of rate expectations further out the curve," says Derek Halpenny, Head of Research, Global Markets EMEA at MUFG.

MUFG notes numerous Fed officials have spoken about the need to engage quantitative tightening, with the latest being Loretta Mester, who said yesterday "we should shrink the balance sheet as fast as we can". 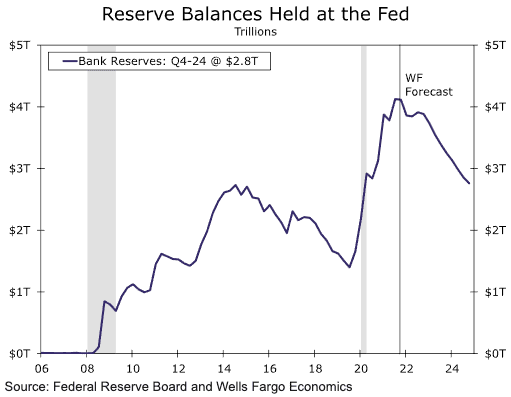 Above: Quantitative tightening will reduce the size of the Fed's balance sheet.

This implies a lower 'terminal' rate for U.S. interest rates and this is not necessarily all-out bullish for the U.S. currency.

The experiences of the Bank of England and the Pound are instructive: the Bank set out in August 2021 the conditions that must be met for it to begin quantitive tightening.

Once Bank Rate is hiked to 0.5% it will stop reinvesting the proceeds of maturing bonds that it owns, leading to a steady depletion of its holdings.

But when rates reach 1% the Bank will consider selling some of its gilts back to the market.

The Pound endured a relatively soggy second half to 2021, with analysts saying the Bank of England's terminal interest rate was set lower than elsewhere, an outcome almost certainly linked to the Bank's well telegraphed quantitative tightening scheme.

Now the U.S. Fed is coming on board with this kind of tightening, albeit with a more opaque guidance; but the implications for the Dollar are clear, at least if the Pound's experience is anything to go by.

"Starting in October, we look for the Fed to stop reinvesting its maturing securities up to a monthly cap much like the central bank did the last time it shrank its asset holdings," says Bryson.

Bryson cautions that quantifying the impact on Treasury yields from projected Fed balance sheet runoff is highly uncertain, much more uncertain than the pass-through from projected fed funds rate increases.

"We think the most likely outcome is for upward pressure on long-term Treasury yields, but only moderately so," he says.

But Kit Juckes, a foreign exchange strategist at Société Générale, says rates will go higher than markets are currently expecting, a view which if correct could allow the Dollar rally of H2 2021 to restart at some point in the future.

"Markets are in wonderland. Faced with 7% inflation and a consensus forecast of 3.9% GDP growth this year, the rates market has repriced the curve to look for 4 rate hikes this year but hasn't pushed its estimate of terminal Fed Funds back above 2%," says Juckes.

The terminal rate is where the Fed's target rate finds itself at the end of the hiking cycle, it has an influence on how far yields further out on the curve can rise.

"2% is Goldilocksian in the extreme," says Juckes.

U.S. CPI data out midweek revealed inflation in the U.S. was now running at its hottest since 1982, and Juckes says this will require an aggressive response by the Fed.

"The world where the Fed can return the US economy to equilibrium with full employment and modest inflation, just by taking rates back to 2%, is the stuff of fairy tales, not the real world," he says.

There could be hope for the Dollar bulls yet.