The Pound-to-Dollar rate has recovered strongly from late September’s lows and may attempt to rise further in the week ahead but could ultimately struggle in its rebound once above 1.37 due to the growing weight of the Federal Reserve (Fed) and resulting strength in the greenback.

Pound Sterling entered the new week above the 1.36 handle against the Dollar and close to having fully reversed late September’s steep decline following a strong corrective performance that may have been aided by a favourable shift in policy stance at the Bank of England (BoE)

Weekend communication from the BoE does little to discourage the market from its idea that the BoE could begin reversing last year’s interest rate cuts at any point in the months ahead - though perhaps unlikely before early 2022 - to minimise the risk of inflation exceeding the 2% target for too long.

Steady uptake of this notion is an obvious candidate to explain the Pound-Dollar rate’s recovery from late September lows near 1.34 to around 1.3650 by Monday, although this recovery is far from assured as Sterling will be sensitive over the coming week to key economic figures due out of the UK as well as the potential implications of remarks from several BoE policymakers who’re among the most ‘dovish’ on the Monetary Policy Committee (MPC).

“Tuesday’s release of Sep jobless claims and Aug employment data and Wednesday’s GDP data presents markets with additional information to price in (or out) BoE hikes in early-2022,” sys Juan Manuel Herrera, a strategist at Scotiabank. 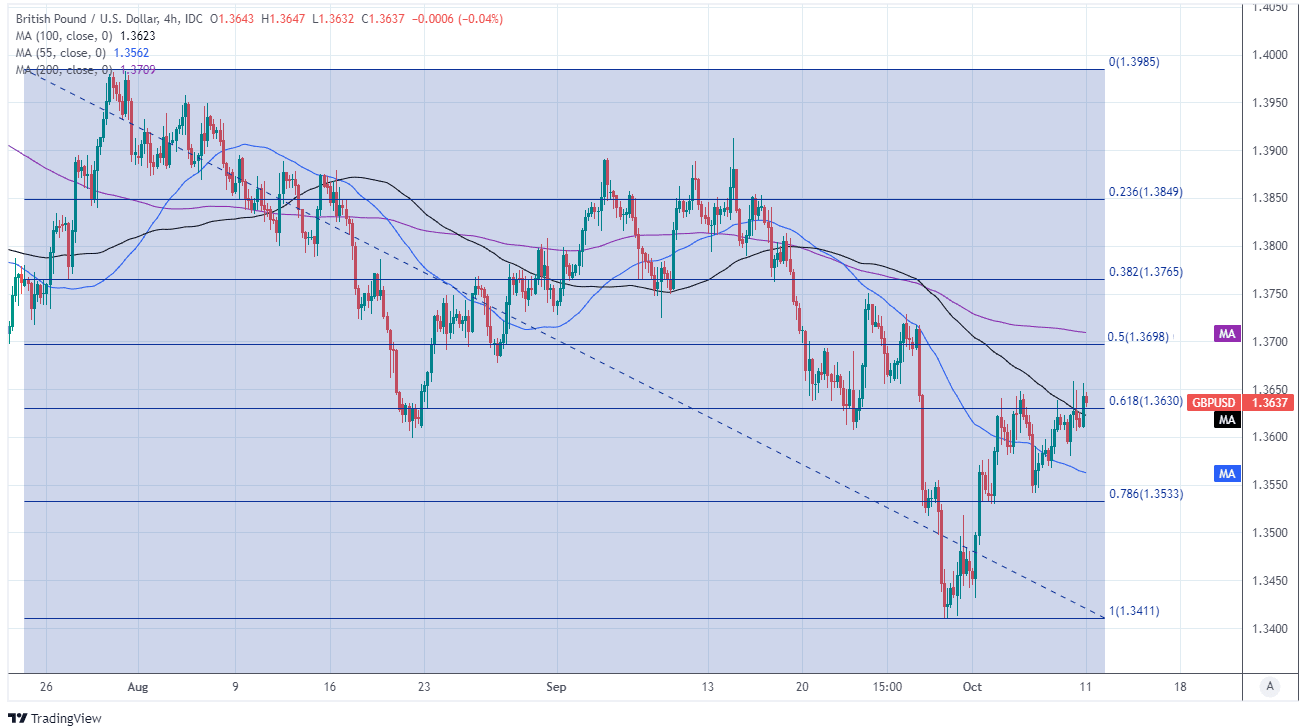 Herrera and the Scotiabank team say that following any advance above 1.3650 the Pound-Dollar rate will face technical resistance around 1.37, which coincides with the 50% Fibonacci retracement of Sterling’s early August fall from close to 1.40.

Others have flagged additional impediments to further gains loitering higher up between 1.3752 and 1.3914.

“Initial resistance is 1.3752, the 23rd September high and the 55-day ma at 1.3758 and the 1.3914 mid-September high. Currently while capped by 1.3914 we will maintain a negative bias,” says Karen Jones, head of technical analysis for currencies, commodities and bonds at Commerzbank.

“GBP/USD has not maintained the break of the 1.3515/04 January 2009 low and 2019 peak – it is not clear if this was a premature break or a false break, but intraday Elliott wave counts remain negative and for now we will favour the downside,” Jones and colleagues wrote in a research note Friday.

Jones and the Commerzbank team have warned that Sterling will be susceptible to fresh losses that could eventually take it all the way back to November 2020 lows around 1.3161 if the Pound-Dollar rate is unable to recover above 1.3914 in the interim.

Sterling did however, appear reluctant to give up the 1.3550 level last week and could yet draw further support from either the remarks made by the three BoE policymakers due to speak as part of public engagements this week or from key UK economic figures due out over the coming days.

“Will the Bank of England walk back the front-loaded market pricing of UK rate hikes? It will be important to watch,” says John Briggs, global head of desk strategy at Natwest Markets.

BoE Deputy Governor Jon Cunliffe and MPC members Slyvana Tenreyro and Catherine Mann, three members who may be the closest the BoE’s MPC still has to a ‘dovish camp,’ will air their own views on monetary policy this week and Sterling will be sensitive to them whichever way they cut.

But Wednesday will see market attention turning back to the Federal Reserve and outlook for its monetary policy when U.S. inflation figures for September hit the wires just hours ahead of minutes from last month’s Federal Open Market Committee.

“We expect the US Federal Reserve, the Bank of England (BoE) and the Bank of Canada (BoC) to start policy tightening cycles in 2022,” says Joseph Capurso, head of international economics at Commonwealth Bank of Australia.

“The US has experienced higher inflation than other advanced economies. We are more confident US inflation will persist above its central bank’s target compared to other economies under our coverage,” CBA’s Capurso also said.

While various central banks including the BoE are at least indicating they could begin to normalise monetary policies over the coming months, the Fed has covered the furthest distance in the shortest period yet. 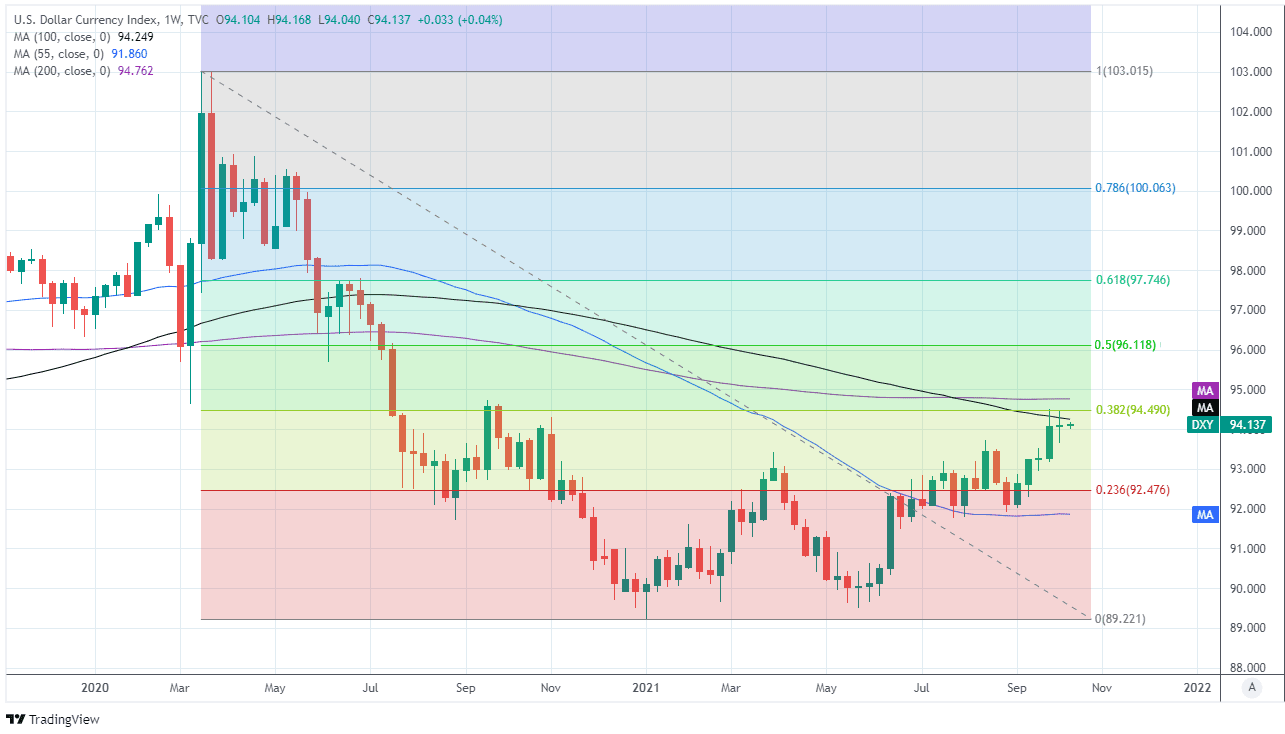 The above more than anything else could be the neatest explanation for why U.S. government bond yields have risen so sharply in the last three months and the Dollar has been so dominant in the currency market.

U.S. bond yields rose and the Dollar advanced broadly in late September after Fed Chairman Jerome Powell said in a press conference that November could see the bank announce a plan to fully wind down its $120BN per month quantitative easing programme before the middle of next year.

“We expect the Fed to announce QE taper plans at their next meeting in November. It would require evidence of much sharper loss of US growth momentum to delay QE taper plans” says Derek Halpenny, head of research, global markets EMEA and international securities at MUFG, who’s also a seller of the Pound-Dollar exchange rate.

The Fed’s dot-plot of FOMC policymakers’ own forecasts also suggested that a majority on the rate setting committee also expected to begin lifting interest rates before the end of next year, which is much sooner than was previously suggested as likely.

The danger is this week that Wednesday’s inflation figures and subsequent minutes of the Fed’s September meeting serve markets a reminder that a significant policy shift is approaching and that the bank could yet surprise again on the sooner side of expectations.

“The Fed’s continued hawkish policy shift combined with more persistent upside inflation risks is keeping upward pressure on US yields and the USD. Even after recent hawkish market repricing, the US rate market is still not expecting the Fed funds rate to rise beyond 1.00% by the end of 2023,” MUFG’s Halpenny wrote in a Friday research note.