The Dollar is advancing against the Euro, Pound and a host of other major currencies ahead of Friday's key Jackson Hole address from Federal Reserve Chairman Jerome Powell, which some analysts say will disappoint those looking for a stronger U.S. currency.

While the speech could trigger some volatility in financial markets, in the run up to the event the market is once more trading to a more sombre tone.

Stock markets are in the red and the Dollar is up, suggesting some demand for the currency's 'safe haven' qualities.

"Stock markets dropped in early trade on Thursday and the dollar rose a touch ahead of the Jackson Hole meeting, whilst wobbly German confidence knocked the wind out of this week’s rally in Europe," says Neil Wilson, Chief Market Analyst at Markets.com.

The currency pair's next moves - indeed also that of the wider market - will likely depend on the market's interpretation of Powell's address.

In particular, investors are looking for any signal as to when the Fed intends to reduce its quantitative easing programme, a process known as tapering.

"Stimulus won’t last forever though and when we do see the Fed scale back, investors are likely to take profit on risky bets, which might not bode well for the risk-correlated pound, especially against the safe haven US dollar," says George Vessey, a currency strategist at Western Union Business Solutions. 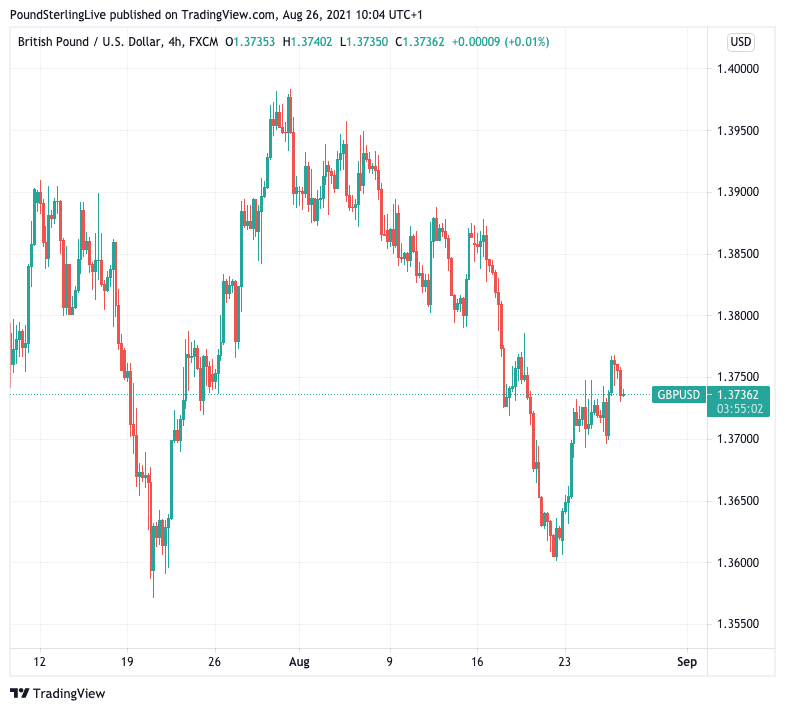 Vessey says a substantive correction lower in global equity markets is arguably long overdue but the timing of that correction is anyone’s guess.

"The fundamental landscape is still supportive given the cheap credit and excess liquidity driving demand for risk-prone assets," says Vessey.

The Fed will likely start reducing its quantitative easing by the end of the year, but for markets the exact timing of this taper is key.

An early taper (September/November) that is aggressive could boost the Dollar, not just via the channel of higher U.S. interest rate expectations, but also via a potential turn lower in global markets.

"A hawkish surprise (an earlier tapering announcement/timeline) would imply a prompter schedule for rate normalisation and a potential rebound in US real yields, which could keep the dollar supported. However, we think that the bar for a significant pull forward of the hiking cycle remains high in the current environment of rising global growth concerns," says a weekly currency briefing note from Barclays.

A later taper (November/December) and a more casual reduction in quantitative easing could meanwhile boost stocks and undermine the Dollar.

"We are not expecting a major policy announcement from Powell at Jackson Hole. The most likely scenario is another non-committal speech from Powell that leaves the market trying to read between the lines, but ending up with no clear direction," says Terence Wu, FX Strategist at OCBC.

Wu expects the market will just move on to the next risk event, "we see the recent softness in the USD as a profit-taking run that should not change the underlying trend direction."

"The USD continues to give back some of its recent gains ahead of the Jackson Hole Symposium, particularly against higher-beta G10 and EM currencies. We think this could extend a bit further, but ultimately think that dips are likely to find support," says Mark McCormick, Global Head of FX Strategy at TD Securities.

Jan Hatzius, Chief Economist at Goldman Sachs says the Fed will likely formally announce the start of tapering at the November FOMC meeting "if all goes well by then", and to taper at a pace of $15BN per meeting.

"We put high odds on a delay beyond November because of the downside risk posed by the Delta variant," says Hatzius.

During his Friday speech Goldman Sachs expect Powell to acknowledge both the strong employment gains in recent months and the downside risks posed by the Delta variant.

"This would keep expectations on track for a potential September warning and November taper announcement, but would carefully avoid locking the FOMC in to that timeline," says Hatzius.

The Dollar eased back and stock markets recovered last Friday after Federal Reserve board member Robert Kaplan said he may rethink his call to taper to start in October if the Delta variant significantly impacts the U.S. economy.

Economists at Barclays say the Fed is not likely to give a hint on the appropriate timing of tapering at Jackson Hole given that the main topic of the symposium is "inequality".

They note the Fed has over recent years made efforts to de-emphasise Jackson Hole in when it comes to monetary policy announcement.

In a weekly currency briefing, strategists at Barclays say they now see less of a need for the Fed to send a strong hawkish message during the symposium after the recent string of U.S. data misses, "which could bring some respite to the USD rally".