The Pound-to-Dollar exchange rate slipped from near recent multi-year highs on Friday and ahead of important inflation data from the U.S., which could bring terror anew to various markets if it or other prices data due out in the June month leads investors to invite 'Feddie Krueger’s' return to global bond street.

Pound Sterling was still close to the 1.42 handle against the Dollar ahead of the weekend but was trading a touch lower alongside GBP/EUR and GBP/JPY exchange rates as all eyes in the currency market reverted to North America where personal consumption expenditures data is due from the U.S. for the month of April.

The PCE price index is the preferred measure of inflation at the Federal Reserve (Fed) and inflation has been a hot topic of late right the way across all of the world’s financial markets, while investors have every reason to be mindful of upside risks to the consensus expectation for a 0.6% month-on-month increase.

"The budget would boost federal spending by 5% above the 2021 projected level, and spending will keep rising to reach USD8.2 trillion by end-2031. At the same time, federal debt will exceed the historical peak seen at the end of WW2 within just a few years,” says Michael Every, a global macro strategist at Rabobank.

It was in the April month that consumer price index inflation rose by 4.2% year-on-year and at its fastest pace since the aftermath of the financial crisis, which is why there are upside risks to Friday’s PCE figures although it’s also the case that expectations of further sharp rises are becoming increasingly widespread for the months and quarters ahead.

Rising inflation has prompted a tug of war between the world’s pre-eminent central bank and investors who’ve often been slow to receive its messages.

The Fed uses monetary policy levers including interest rates and quantitative easing bond purchases to manage inflation but has since June 2020 been seeking to generate more inflation than ever before and over a longer sustained period than before.

It says recent sharp increases in the official measure of inflation are likely to be “transitory” and that it will nonetheless continue with its new average-inflation-targeting policy, although many in the market have been doubtful that it would; while recent comments from Federal Open Market Committee members have leant weight to those doubts. 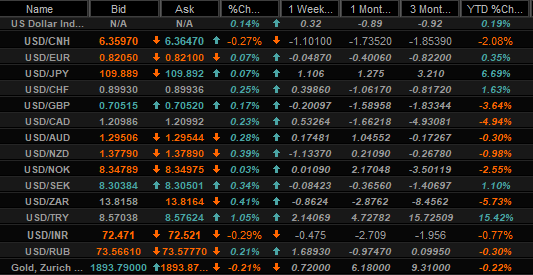 This is a recipe which could make for declines in bond prices, increases in bond yields, volatility in the currency market and a nightmare for investors as Feddie Krueger brings terror anew to Global Bond Street.

“The Fed is now talking about when they may start talking about QE tapering. A number of Fed speakers this week have signaled that the discussion for QE tapering could start later this year, if the economy continues improving at a sufficient pace,” says Athanasios Vamvakidis, head of FX strategy at BofA Global Research.

“The market is already pricing QE tapering to begin next year and rate hikes the year after. Therefore, inflation is what could really surprise markets, leading to a faster tightening once the Fed starts.”

Whatever the outurn of Friday’s U.S. PCE inflation data; Feddie Krueger cannot be kept away from Global Bond Street forever, not with investors’ inflation expectations becoming so very well entrenched, which could mean regular bouts of inflation-induced volatility in the world’s financial markets. 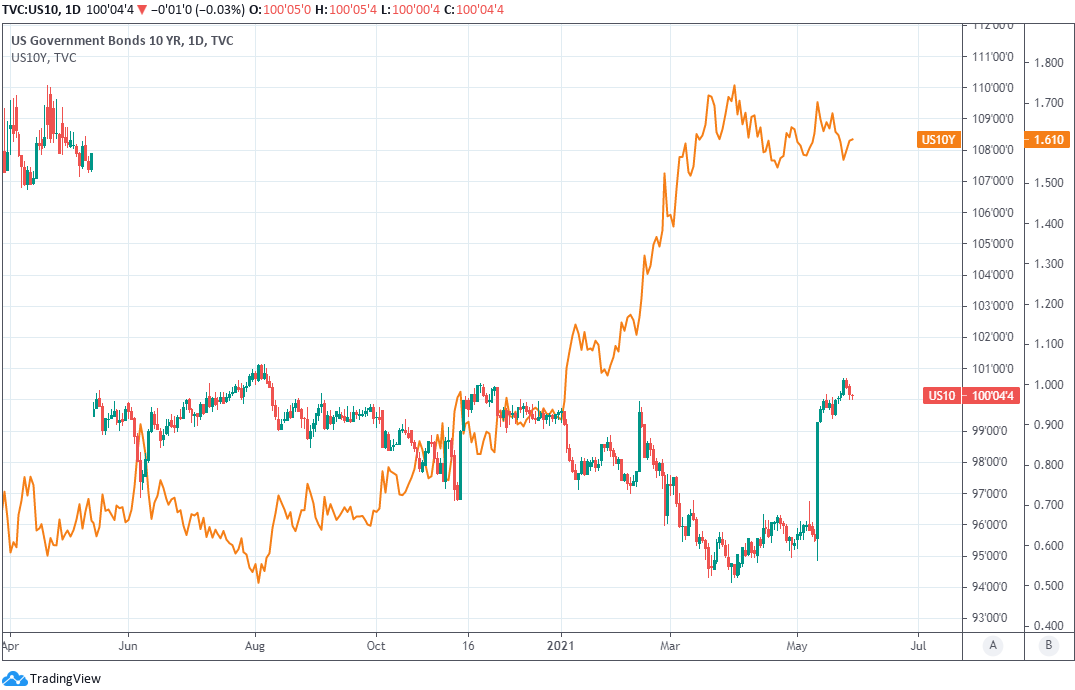 “The dominant feature for financial markets at this juncture is still massively easy monetary policy (by all central banks). That easy policy is being accompanied by ongoing global economic recovery. Rising equity prices and rising commodity prices are key end results. Those twin effects are spilling over to FX in the normal fashion,” explains Greg Anderson, global head of FX strategy at BMO Capital Markets.

“In Q1, there was another factor at play, and that was a spike in 10Y bond yields, with US Treasuries at the center of the action,” Anderson adds.

These bouts of inflation-induced volatility are downside risks for a Pound-to-Dollar exchange rate which was on Thursday boosted back up above 1.42 by Bank of England (BoE) policy talk, which saw Sterling return to within arm’s reach of its 2021 high near 1.4240.

The Pound-to-Dollar exchange rate’s charts however, are also warning of downside risks and that a period of consolidation could be looming thereafter given a divergence between prices and the relative-strength-index (RSI), which is a phenomenon known as “bearish divergence.”

“GBP/USD bounced higher yesterday BUT continues to hold below 1.4238/45, the recent high and the March 2018 high, and we would allow for some near term consolidation. We note the divergence of the daily RSI,” says Karen Jones, head of technical analysis for currencies, commodities and bonds at Commerzbank. 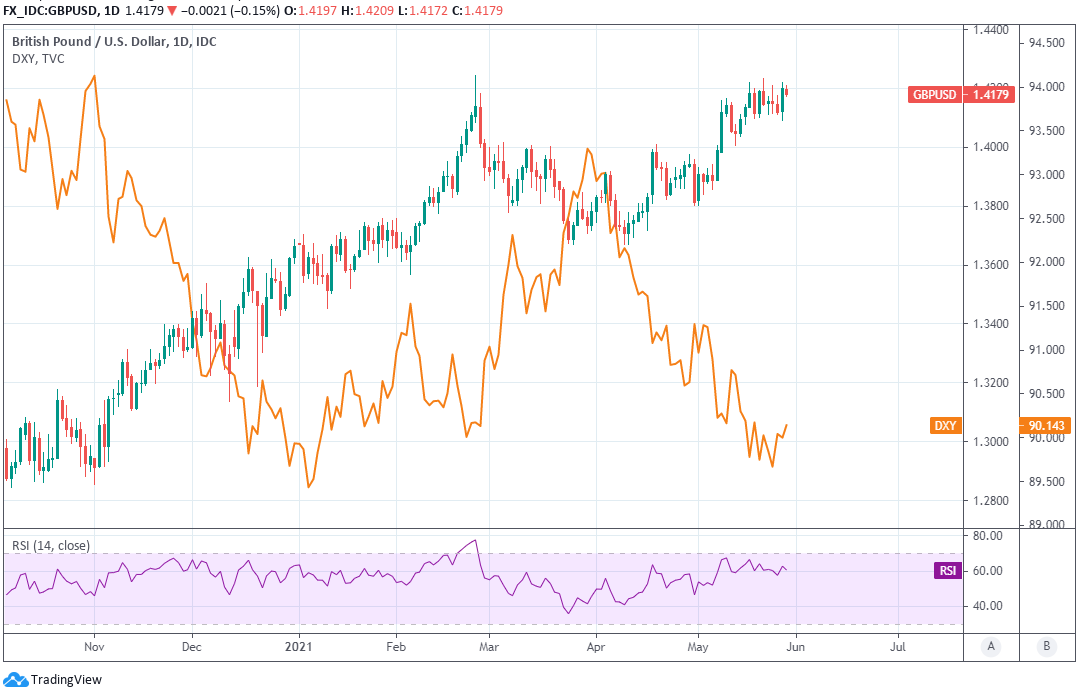 Above: Pound-Dollar rate shown at daily intervals alongside U.S. Dollar Index and with relative-strength-index in lower pane.