The Pound-to-Dollar exchange rate preserved its upward trajectory last week but is at risk of coming undone in the days ahead as a triple-shot cocktail of political risk threatens to pollute the atmosphere in markets, curbing risk appetite among investors and punishing Pound Sterling.

Pound Sterling enters the new week facing immediate setback as an ongoing deadlock in the Brexit negotiations pushes Prime Minister Boris Johnson toward a binary decision on crucial issues, which could push the British currency toward a form of cliff edge as soon as Monday evening.

"It is clear that time is running out and the sense of urgency is apparent, particularly with the UK government announcement to bring back the Internal Markets Bill for the process of "Ping-Pong" (December 9th) and to reintroduce the clauses that would violate the Withdrawal Agreement," says Athanasios Vamvakidis, head of FX strategy at BofA Global Research.

The BofA team say that any eventually agreed deal between the UK and EU should help the Pound-Dollar rate to stabilise around 1.35, although it was close to that level already on Friday and could face declines early on this week due to the apparently ebbing prospects for an agreement to be reached in time.

In addition, relations between the two sides risk being aggravated by the return of Downing Street's controversial Internal Market Bill to the House of Commons. 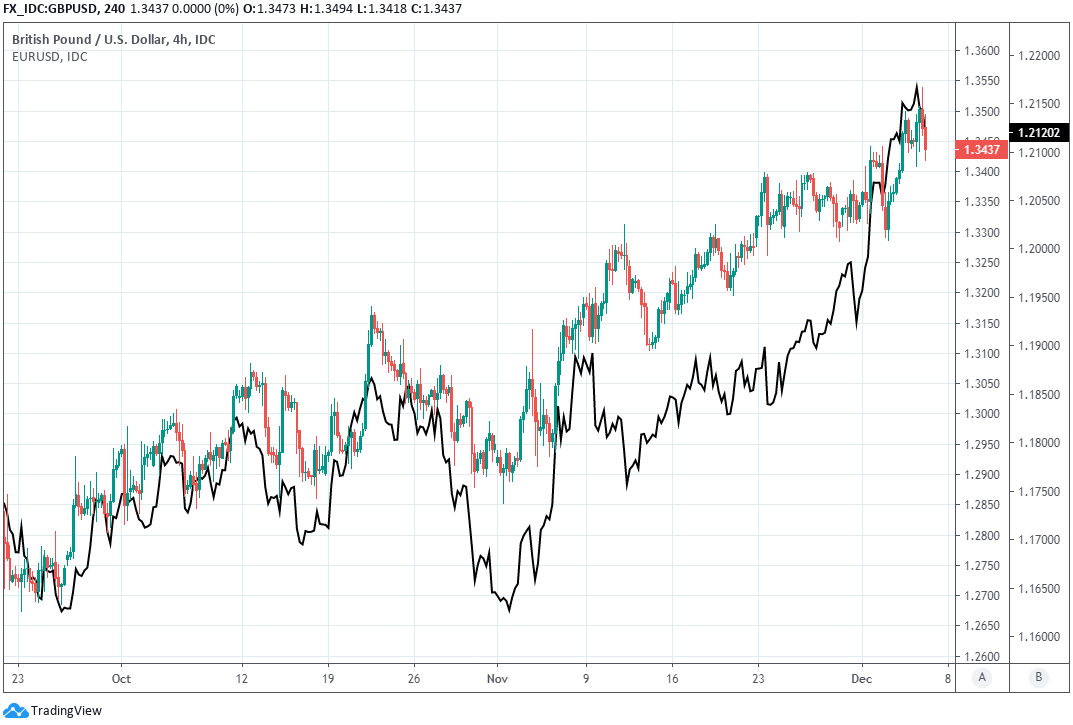 Analysts at MUFG forecast a Pound-Dollar decline to the mid-1.20s in the event of a 'no deal' Brexit where trade with the EU is governed by World Trade Organization (WTO) terms and Most Favoured Nation tariffs rates are applied to the imports and exports which traverse the English Channel each day.

That wouldn't happen until January 01, which might mean that Sterling's 'no deal' losses are slow to build, although this Thursday and Friday's European Council meeting is thought to be the last opportunity for EU leaders to sign off on any agreement and have it ratified by December 31.

Irrespective, and to make matters worse for Sterling, some strategists are looking for a Euro correction and U.S. Dollar rebound in the week ahead that could easily add to the pressure felt by the Pound. This is in part because the Pound-to-Dollar rate would need to fall further and faster than EUR/USD in order to avoid a rising Pound-to-Euro rate.

"Risks for the USD are skewed to the upside as short positioning is looking stretched and the USD increasingly trades at a discount to its shorter-term drivers. Simply put, we think the EUR's rally has gotten too far ahead of its underlying fundamentals," says Ned Rumpeltin, European head of FX strategy at TD Securities. "As a result, we are now fading the move and entering a short at 1.2165, targeting a move down to 1.18 with a one-month expected horizon."

If the Euro's rally against a battered and bruised U.S. Dollar has gone too far at a point where the Brexit trajectory is again toward a WTO outcome, then so too has the up move in Pound Sterling. TD Securities is tipping a EUR/USD decline back toward late November lows around 1.18 ahead of year-end, which would drag the Pound-to-Dollar rate back into the 1.31-to-1.33 range if Sterling was to attempt to nullify the impact on the Pound-to-Euro rate. 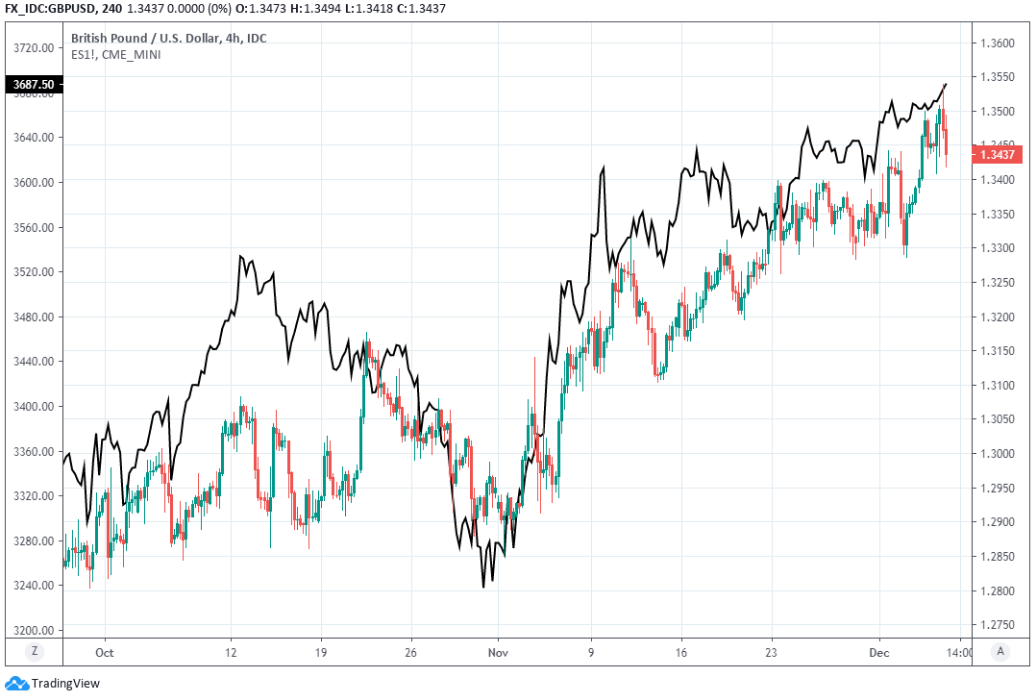 "The Elliott wave count is suggesting a pull back into the 1.3300-1.3215 range. Nearby support is offered by the 55 day moving average at 1.3075 and also by 1.3015, the 5 month uptrend and for now," says Karen Jones, head of technical analysis for currencies, commodities and bonds at Commerzbank.

Other political risks could also lift the Dollar from 2018 lows against the single currency and others this week, potentially exacerbating Sterling's plight.

U.S. and European lawmakers will be compelled to make political decisions that could curb investor appetite for risky assets like stocks, which the Pound, Euro and others are positively correlated with.

Across the pond any failure by Republican and Democratic Party lawmakers to compromise on priorities for the latest spending bill before Friday could lead to a U.S. government shutdown, although many analysts hope that Georgia state's looming run-off election for the Senate on January 05 will focus minds.

"This pro-growth dollar decline needs to be fed by good news on growth/vaccines and a Federal Reserve still prepared to keep rates on the floor," says Chris Turner, global head of markets and regional head of research at ING. "On the former, markets will be watching out for progress on the $908 billion bi-partisan stimulus bill in the US Senate and also whether the Food and Drug Administration approves the Pfizer/BioNTech vaccine when it meets Thursday." 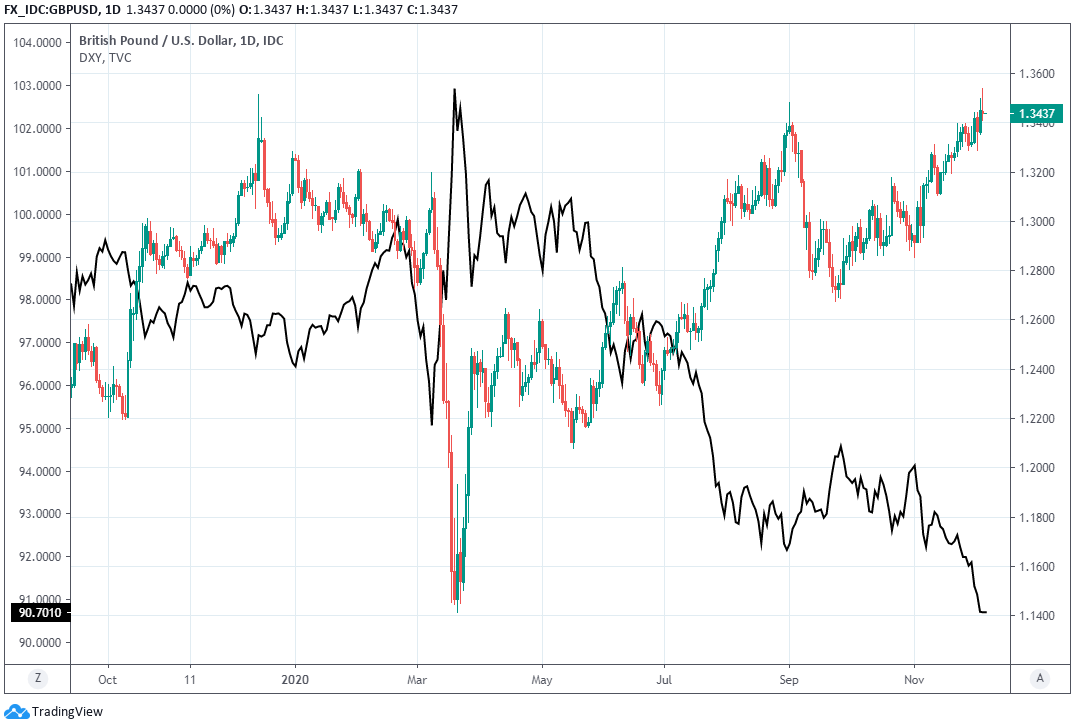 Many also expect EU leaders will either reach an agreement with Hungary and Poland on Thursday or Friday that enables the bloc's coronavirus recovery fund and next seven-year budget to win the unanimous endorsement necessary for implementation. Both countries have threatened to veto the budget out of objection to new terms for accessing EU funding.

"The adverse scenario of no solution has the potential to trigger a significant political crisis in the EU," says Piet Haines Christiansen, chief analyst at Danske Bank. "There are strong interests on both sides (countries need money and stability, not political chaos and market turbulence), however, we also acknowledge a risk of a delay to a solution."

Any failure to agree a U.S. budget or to pass one in Europe could cast doubt over short-term economic outlooks on both sides of the pond, dealing a blow to risk appetite in the process.

This would further weigh on currencies like Sterling and the Euro while lifting the Dollar. Outcomes for both are expected on Thursday or Friday.

Brexit tensions and uncertainty over budgets in Europe and the U.S. will marr what is otherwise a supportive backdrop for risky currencies and especially Pound Sterling given the Pfizer & BioNTech vaccine will begin to be made available in the UK from Monday.

"Vaccines have dramatically brigthened the economic outlook. GDP probably still fell during the second lockdown in November, perhaps by up to 8% m/m, and the strict COVID-19 regional tier system will limit the rebound in activity in the coming months. But the removal of COVID-19 restrictions as vaccines are rolled out more widely next year should allow GDP to recover more rapidly beyond the next few months," says Paul Dales, chief UK economist at Capital Economics. "As a result, rather than rise to 9%, we now think the unemployment rate will peak at 7%. And if the economy returns to its pre-pandemic level early in 2022, then it might not be that long before unemployment falls back to 4%." 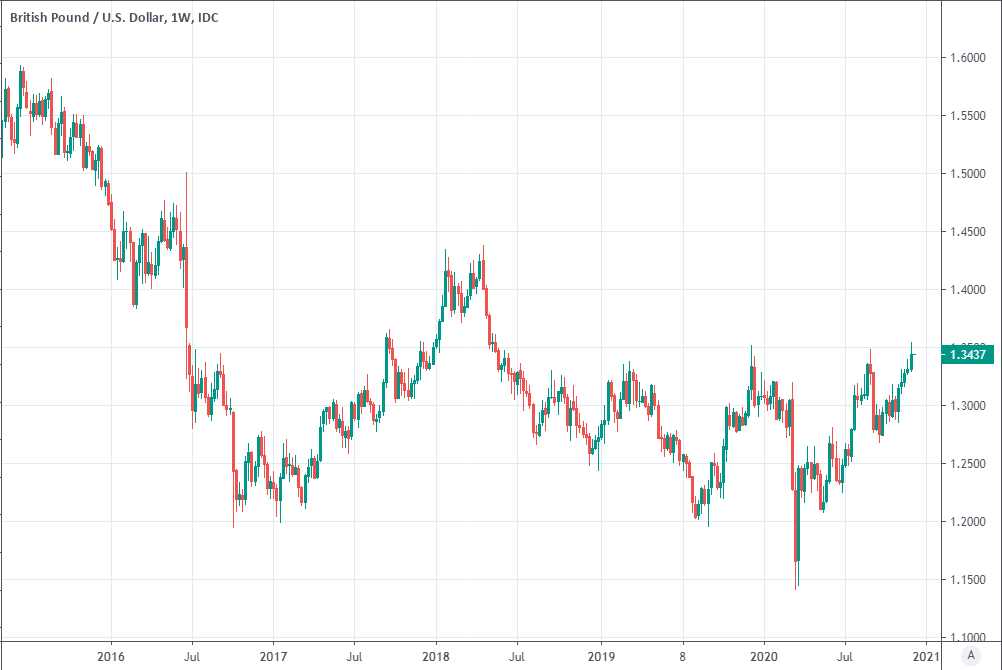