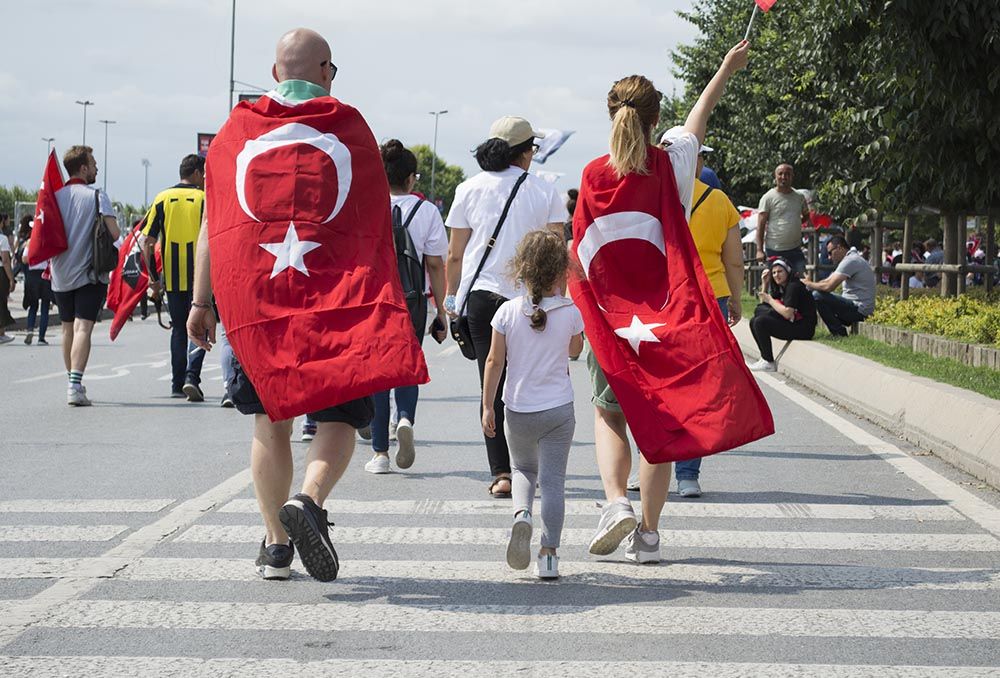 The Lira outlook has improved since the Central Bank of the Republic of Turkey (CBRT) raised interest rates this week, leading Commerzbank to scrap forecasts for further punishing declines in the coming weeks, with the Turkish currency now expected to consolidate near to current levels into year-end.

Turkish exchange rates came off the boil Friday as the Dollar strengthened against emerging market currencies, but further punishing losses that had been expected to befall the Lira in the months ahead may now have been averted.

“We are aware that we need to take some bitter pills if needed at this stage. I evaluate yesterday’s interest rate hike decision in this framework,” Reuters reported President Recep Tayyip Erdogan saying to business leaders on Friday.

This was after the CBRT announced a supportive policy u-turn on Thursday in which its main interest rate from 10.25% to 15% and pledged to only conduct monetary policy using that one-week repurchase rate, which now sits near the midpoint between its 8.25% pre-September low and July 2019 high of 24%.

Steep cuts to the cash rate, inspired by Erdogan's unorthodox view that higher interest rates cause inflation, drove 'real interest rates' in Turkey below zero and crushed the Lira for having deprived investors of any compensation for parking capital in the emerging market Turkish economy.

Currency devaluation, coming on top of other inflationary factors, has lifted Turkish consumer prices this year but the CBRT made a firm commitment to tackling those pressures in an orthodox manner on Thursday and for now at least analysts and investors are willing to take the bank at its word.

"The new CBT governor’s assessment also reflects a more fundamental approach, abandoning the idea that deep economic cracks can be papered over by swap deals and other financial engineering," says Tatha Ghose, an analyst at Commerzbank. "Following these positive changes, which have established a positive real interest rate in Turkey via a more transparent policy mechanism, we no longer forecast USD-TRY to overshoot in coming months." 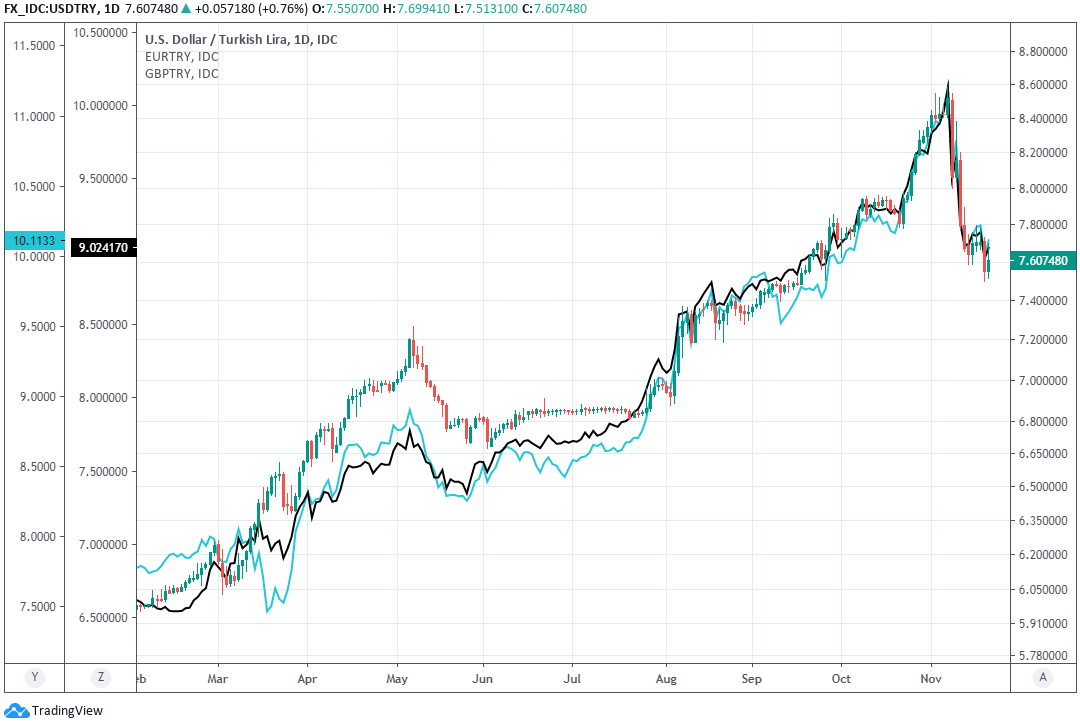 Ghose had looked for the corrective pressures of global market financial flows to push Turkey's Lira further and further toward the edge of an abyss when it appeared that the CBRT would continue to keep interest rates at unsustainably low levels, seemingly under the undue influence of Erdogan.

But Thursday's rate hike, which came only after a changing of the guard at the bank and finance ministry, has bought policymakers time in which Commerzbank sees the Lira holding near recent CBRT-inspired highs.

USD/TRY is tipped to edge higher back to 7.75 by year-end before declining in  the first half of 2021 to again stabilise around 7.50, as it has in the aftermath of Thursday's rate hike. The exchange rate was previously expected to rise to 10.0 in the months ahead. Meanwhile, the GBP/TRY rate is seen edging higher to 11.55 in the event that a Brexit deal is agreed over the coming weeks.

However, the Euro-to-Lira rate is seen as having further to fall between November and the end of June next year, indicating further and new upside for the Turkish currency. EUR/TRY is now forecast to end the year at 8.91 ahead of declines to 8.82 and 8.78 respectively over the first two quarters of next year.

"Erdogan wants more direct control over the central bank. Nevertheless, for now, he has compromised to take the “bitter pill” of higher interest rates in order to stabilise the lira. Had he not conceded, Turkey would soon have to approach the IMF because of ballooning FX liabilities," Ghose says. "The risk scenario, however, remains that President Tayyip Erdogan will begin to ask for rate cuts too soon and the lira crisis will be back once again."

Ghose and the Commerzbank team are skeptical that the CBRT's pivot and Lira's salvation will be sustained, a stance that's evidently not without merit, not least of all because President Erdogan was reported to reiterated his unorthodox views on inflation Friday.

Elsewhere in the world the convention is for a central bank to raise rates when it wants to curtail inflation, which is sensitive to economic growth and many other factors, while only cutting them when it wants to lift inflation. 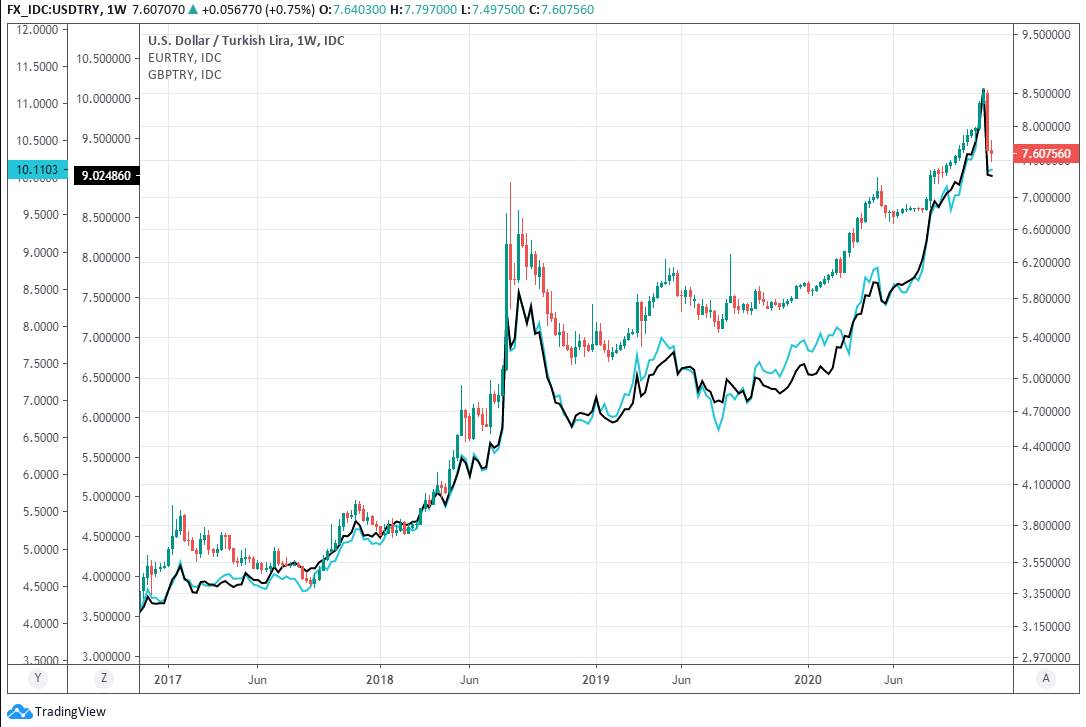 "In previous episodes where the CBRT tightened policy and reverted to using only the one-week repo rate to set monetary conditions, the lira tended to appreciate in the following three months. Accordingly, we now forecast the lira to end 2020 at 7.25/$ (previously 8.00/$), which implies a further appreciation of around 4% from its current level of ~7.5/$," says Franziska Palmas at Capital Economics, "On the other hand, there are potentially some downside risks for the lira in our view. For a start, it is possible that the recent shift in policymaking does not last. In past instances when the CBRT made the one-week repo rate its sole policy tool (in 2011, 2014 and 2018), it ultimately reverted to using the ‘corridor’ within a year or two. And President Erdogan does not appear to have abandoned his aversion to high interest rates entirely."

Erdogan has shown no signs of abandoning his beliefs and has made a number of remarks in the last fortnight that Lira watchers could be forgiven for feeling uneasy about. After all, the CBRT has lifted interest rates sharply before and set out other earlier plans to do things differently in the future only to revert back to its contentious and politically-inspired old approach within time.

The Turkish president reportedly told the Turkish Union of Chambers and Commodity Exchanges (TOBB) Economy Council Meeting on Wednesday that investors in the country should not "get crushed under high interest [rates]," just days after saying in a statement that “We are now waging a struggle of historic importance against those who seek to yet again condemn Turkey to modern-day capitulations through the shackles of interest rates, exchange rates and inflation" when commemorating Ghazi Mustafa Kemal Atatürk, founder of the Turkish republic. This is partly why some analysts are so skeptical that the Lira will be able to sustain current levels for long.

"We must remember that Turkey has a long history of losing patience with consistent inflation targeting. President Erdogan has already repeated his claim that high interest rates cause high inflation (his non-conventional view of monetary policy) and that rates must come down after inflation has decelerated. Hence our base-case for the medium-term remains that the benchmark rate would be lowered back towards 10% after inflation has moderated to single-digit by the middle of next year," Commerzbank's Ghose says. "After that, the lira exchange rate will resume an upward path, reaching 8.50 by the end of 2021." 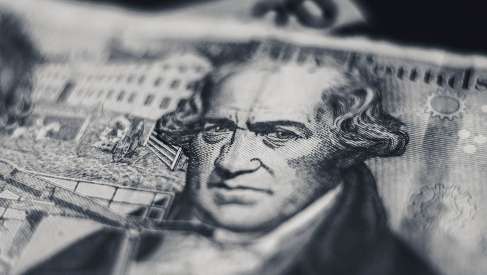