The Pound-to-Dollar exchange rate moved back above 1.32 at the start of the new week and is within touching distance with the two-month highs reached last week, but charts warn of the potential for a technical correction lower just as Brexit trade talks enter a critical period.

Pound Sterling was the second-best performing major currency behind only the New Zealand Dollar last week after being lifted early on by reports of progress in the development of a coronavirus vaccine, which also lifted stock markets back to post-coronavirus highs.

Meanwhile, the Dollar rebound tepidly from earlier losses against a range of currencies including the Euro, Yen and Swiss Franc, though not the Pound which was aided at the last minute by the resignation of an influential government adviser, Dominic Cummings.

"That doesn’t say much on how talks are progressing – of which we still hear conflicting reports. Nonetheless, we’re still expecting some good news on that front. For GBP/USD, a retest of 1.35 is still in play over the coming weeks," says Bipan Rai, North American head of FX strategy at CIBC Capital Markets. "We’re still of the view that the short USD trade is too consensus at this point and that the build in positions needs a washout before the next leg lower. We’re neutral from a tactical sense for now."

Analysts and investors saw Cummings' exit making Brexit compromises from the British side more likely, although this assumption will be stress-tested over the coming days and not least of all because British negotiator David Frost reiterated on Sunday a long-standing insistance that an agreement "takes back control of our laws, our trade, and our waters," warning that this "has been our consistent position from the start and I will not be changing it."

Impediments to a deal remain EU demands for a so-called level playing field and differences over fisheries access.

"There has been some progress in a positive direction in recent days. We also now largely have common draft treaty texts, though significant elements are of course not yet agreed. We will work to build on these and get an overall agreement if we can. But we may not succeed," Frost wrote in a Twitter post. 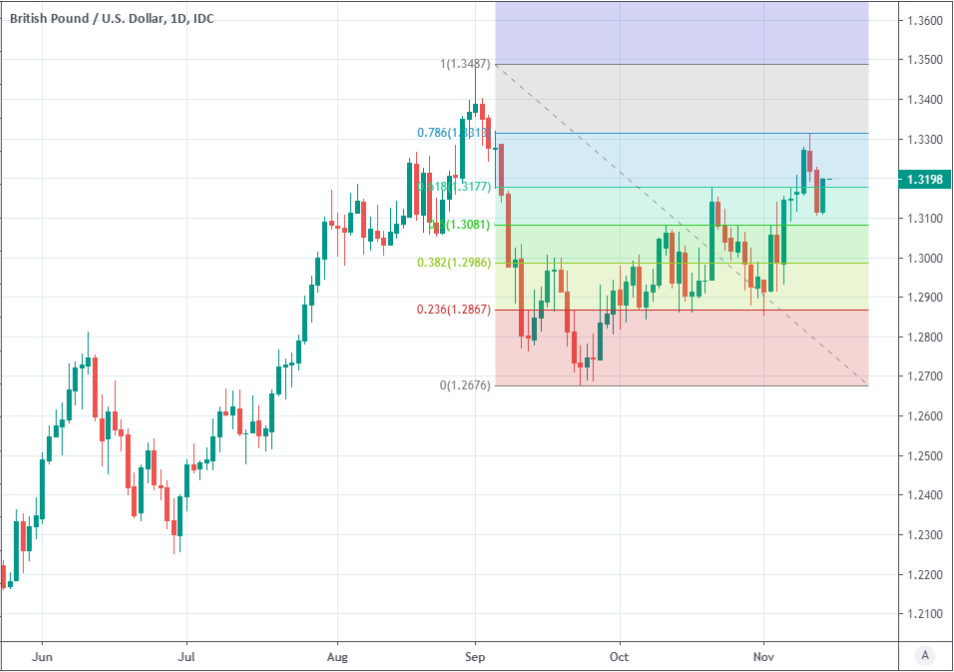 Above: Pound-to-Dollar rate fails to overcome key Fibonacci retracements of September correction lower. Lock in today's exchange rate for use over coming months if you are looking to protect your international payments budget, learn how here.

Frost's comments did not rule out an intervention by Prime Minister Boris Johnson, who would need to make any necessary political compromises, but they do indicate that if a deal is to be done at all it might not be without the talks first having gone down to the wire and potentially over-running this week's deadline.

This could dent appetite for the Pound over the coming days given that some of last week's gains resulted from perceptions that a British compromise was likely ahead of the EU leaders' conference on Thursday 19.

The summit is the main event for Sterling this week because it's widely thought to mark the final opportunity for a deal to be struck if it's to be ratified in European law before the December 31 end to the transition period.

"The UK’s playbook for trade negotiations is unlikely to change much, if at all. We still expect that the UK and the EU will blow past Sunday’s negotiations deadline to likely extend it to Wednesday but still with only an extremely slim chance that an agreement is reached," says Shaun Osborne, chief FX strategist at Scotiabank. "GBP is at risk of quickly unwinding its latest gains."

Sterling could rally toward 1.35 if a deal is actually agreed but fall back below 1.25 and potentially much lower than that if a 'no deal' exit begins to look likely, a range of analysts have suggested.

The danger is that investor unease grows as Thursday's deadline approaches, weighing on Sterling in the process, although the 1.3001 and 1.2915levels are seen as likely to offer support on the way down in this scenario.

"GBP/USD has recently rallied to and failed at the 78.6% retracement at 1.3310 and is under pressure near term," says Karen Jones, head of technical analysis for currencies, commodities and bonds at Commerzbank. "Support is offered by the 55 day moving average at 1.3001 and also by 1.2915 the 5 month uptrend. We would allow for a slide back to here."

Jones is a seller of the Pound from 1.3310 and is targeting a fall back to 1.2925 this week, a period in which Sterling will remain sensitive to the stock markets it's often appeared to follow in recent months. 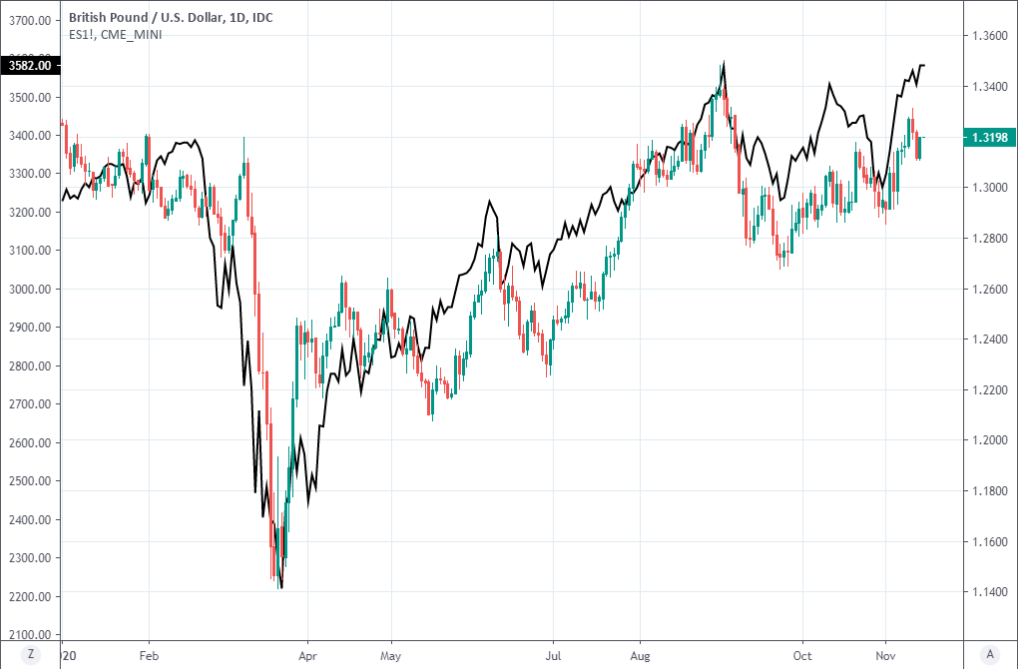 Stocks were retesting their post-March highs last week but could themselves be susceptible to declines over the coming days as coronavirus-related restrictions threaten recoveries in Europe and now North America too.

"Markets will face a test this week as S&P500 pushes closer to a new all-time high. This comes amid ongoing political risks and rising COVID-19 case numbers," says Daniel Been, head of FX research at ANZ.

Stocks were boosted when Pfizer said its coronavirus vaccine candidate had proven highly effective in clinical trials, helping to sustain a rally ignited when opposition Democratic Party candidate Joe Biden appeared to win the race for the White House in the November 03 election.

But it could be months if not longer before a vaccine is rolled out globally and in the meantime, the coronavirus is closing down economies again, notably in Europe where Germany warned at the weekend that recently enhanced restrictions on activity could last for the duration of winter.

"The virus will likely peak when temperatures bottom, which means that we still have (at least) 6-8 tricky weeks ahead with surging case counts across many Western economies due to falling temperatures. Whether the market will care is another question since the medium-term outlook has obviously brightened due to the vaccine news, but a surging case count over the coming 6-8 weeks and a potential nationwide lock-down in the US surely can’t be seen as good news. Austria’s announced lock-down as of Tuesday is another good example of this," says Martin Enlund, chief FX strategist at Nordea Markets.

Major European economies including the UK entered a lesser form of lockdown at the beginning of November, threatening to send economic recoveries into reverse, although speculation is that shutdowns that were initially planned for one month will in fact last for much longer. Meanwhile, with the U.S. election now out of the way, there is a risk that U.S. cities and states also begin to tighten restrictions again in response to their own further wave of infections.

The resulting risks to the economic recovery are likely to mean October's UK and U.S. retail sales figures struggle to get a look-in this week. 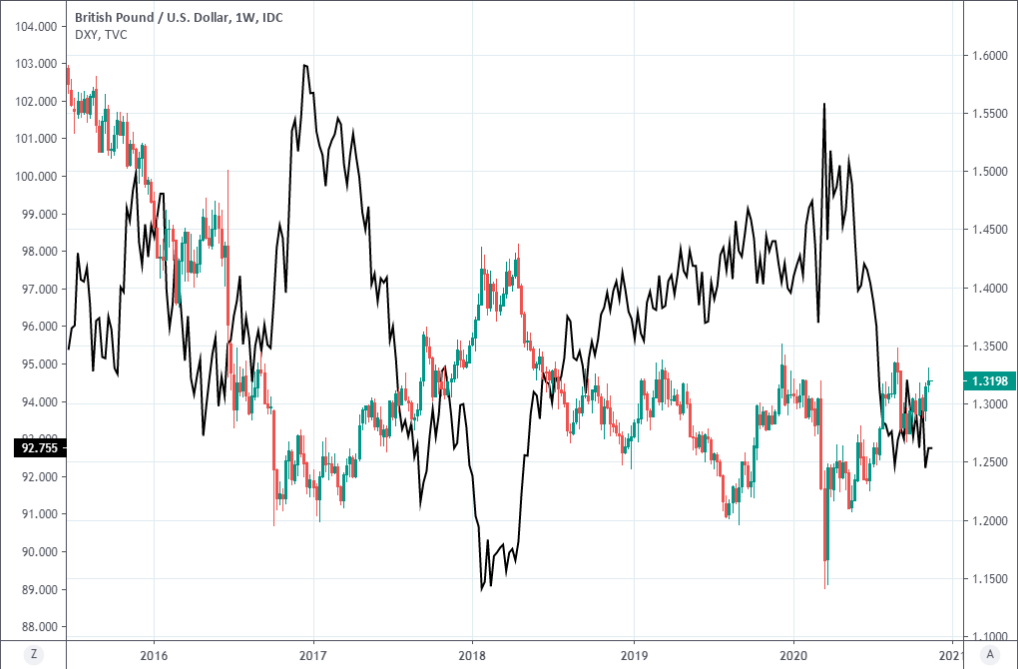