The Dollar Index steadied Tuesday as an increase in U.S.-China tensions and further rollback of earlier reopening decisions saw investors turn cautious as corporate earnings season gets underway, but the outlook for the greenback is increasingly hanging in the balance.

Risk appetite ebbed after the U.S. rejected a number of Beijing's contested maritime claims in the South China Sea and indicated that the White House could soon turn its attention to Chinese companies listed on American stock markets in a bigger way, further souring and already darkening mood.

"Liquidity and more stimulus may come to the rescue again, but it’s doubtful it will be of the same magnitude as during the first wave of the Covid-19 outbreak. Hence, the recent measures taken by California could provide the first serious test for equity markets, especially with volatility still elevated," says Jeroen Blokland, a multi-asset portfolio manager at Robeco, a buy-side fund house with €171bn (£151bn) under management in 2019.

Stock markets and risk currencies have wobbled since Monday evening when California, the most populous U.S. state, reimposed a number of 'lockdown' restrictions in an effort to contain a resurgent coronavirus, lending stability to a Dollar that has come under increasing pressure in recent weeks.

Dollar Index gains arose Tuesday from losses in Sterling, the Japanese Yen and Canadian Dollar, which were enough to offset fractional gains in the Euro. However, the greenback did also rise against some non-index rivals including the Kiwi Dollar as investors remained cautious ahead of U.S. corporate earnings reports for the second quarter.

"The reintroduction of lockdown restrictions in California, together with US Secretary of State Pompeo’s hardening of their stance on China’s “unlawful” activities in the South China Seas sent a wave of anxiety though recently complacent markets," says Tim Riddell, a strategist at Westpac. "Risk currencies were also defensive against a mildly rebounding USD." 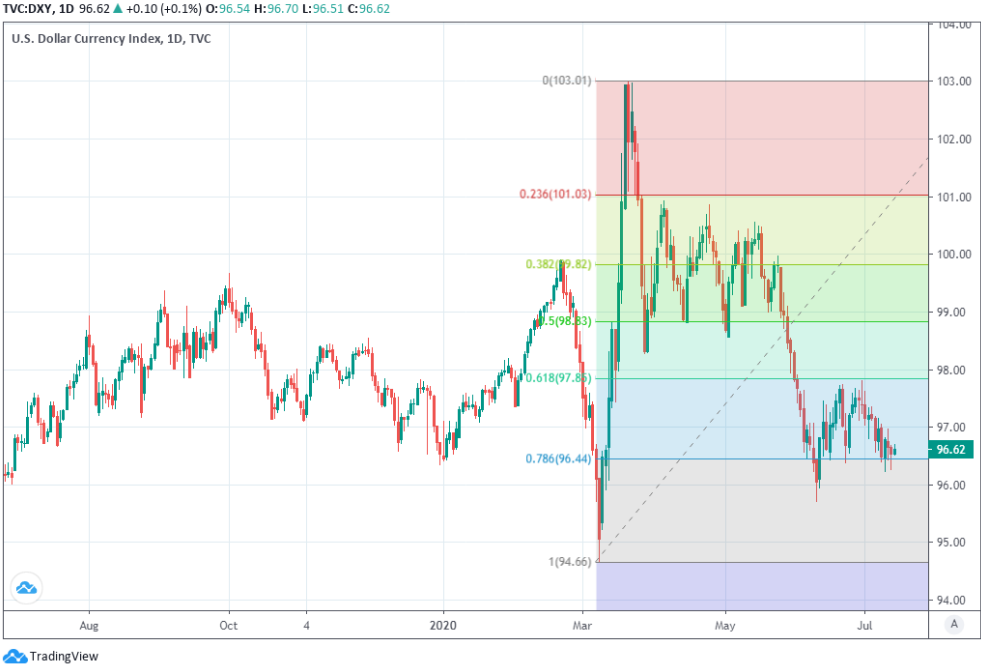 Above: Dollar Index shown at daily intervals with Fibonacci retracements of March rally.

Sterling was the worst performing major currency owing to a -0.31% decline in the Pound-to-Dollar rate that has roots in worse-than-expected May GDP figures from the UK, which showed economic activity remaining close to the lows struck amid the first full month of shutdown in April.

"With US-China tensions flaring, coronavirus cases rising and earnings season underway, risk-off market conditions could dominate this week and that does not bode well for the risk-correlated British Pound," says George Vessey, a currency strategist at Western Union Business Solutions. "The pound remains depressed in the lower realms of the $1.25 area against the US Dollar."

Investors had hoped GDP would rise by more than 5% in May but in the event it recovered only 1.8%, drawing expressions of concern from Chancellor Rishi Sunak and prompting investors to shun the Pound.

The Euro-to-Dollar rate converted a fractional loss into a modest gain after the July ZEW analyst confidence index for the Eurozone surprised on the upside, rising from 58.6 to 59.6 when consensus had been for it to fall back to 55.8.

Germany's ZEW index did surprise on the downside however, when it fell from 63.4 to 59.3 against a consensus that was looking for 60.1.

Euro price action came after Chancellor Angela Merkel drew a line in the sand over the EU recovery fund. 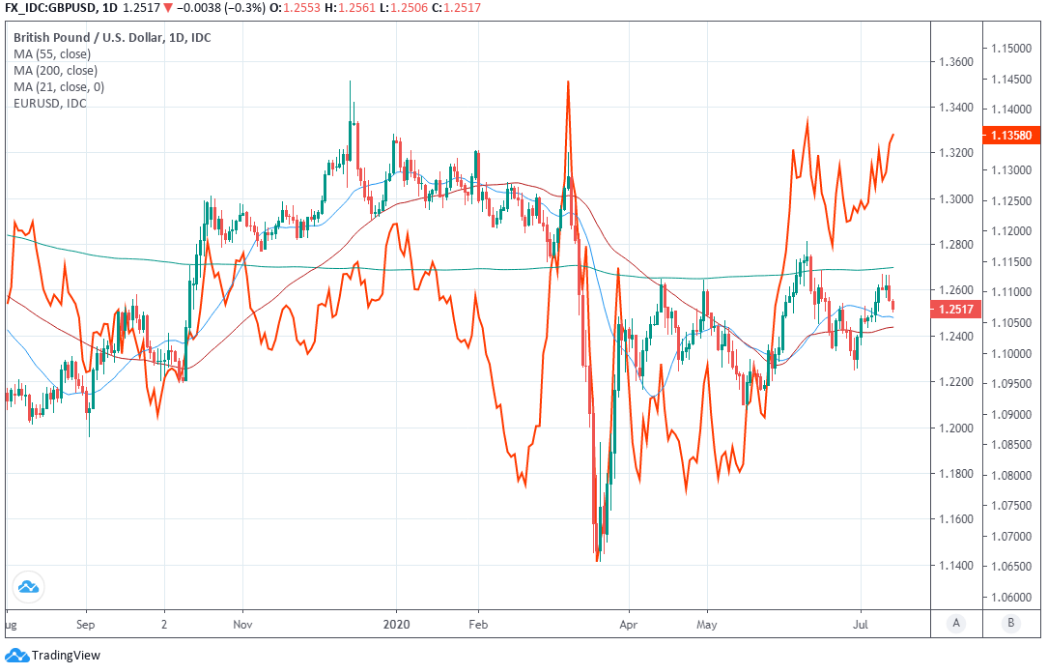 The fundamental and technical tables have turned against the Dollar of late as a second wave of coronavirus and comparatively greater economic damage from the crisis have combined with an upbeat mood among investors about the prospects for a global recovery, best reflected by rising stock markets, to undermine appetite for the U.S. currency.

"USD net positions have now been in negative territory for four consecutive weeks reflecting the strong recovery in risk appetite in recent months. The data appears consolidative last week though net shorts did drop slightly," says Jane Foley, a senior FX strategist at Rabobank. "Net short GBP positions dropped back last week but the overall tone is still a far cry from the strength that persisted after the December UK general election."

Losses have made for an increasingly bearish outlook on the charts with the protracted period of daily declines since early June having dragged the 55-day moving-average below the larger 200-day average, leaving in its wake a technical formation known as a death cross that's served as a harbinger of further losses on nearly two thirds of occasions it's been seen in recent years.

“EUR/USD's technical golden cross and its mirroring DXY death cross are providing some affirmation for USD bears and further USD downside,” says Paul Ciana, chief technical strategist at BofA Global Research. “Science aside, the art of technicals supports a Q3 decline. A bear flag pattern and bearish MACD cross imply the DXY could decline further this quarter. We estimated a decline to 94.88 and possibly 93.08 could follow should this "wave 5" decline be of similar size to the "Wave 1" in April. Should the DXY rally above the late June/July highs of 97.80-98 we would reconsider this view.”

Ciana and the BofA team see this dragging the Dollar Index back to 94.88 over the coming weeks, although the greatest influence on the trajectory of the Dollar in the days ahead could be the S&P 500. 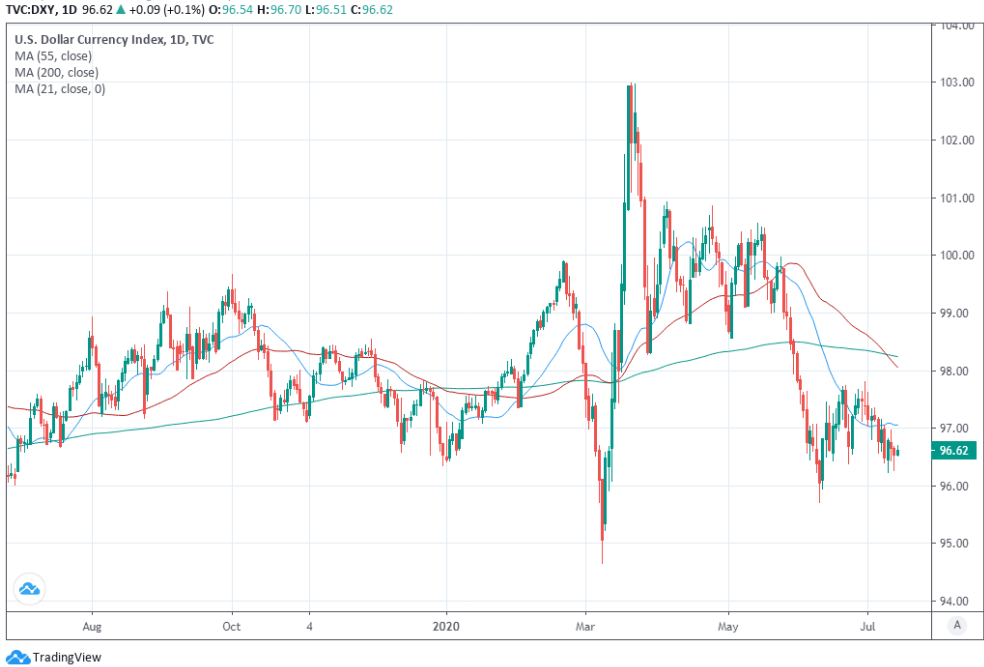 Above: Dollar Index shown at daily intervals with 21, 55 (red) and 200day (green) moving-averages.

"With US technology stock valuations at record levels there is little margin for error so any revenue miss could lead to steep declines. The record high index weight concentration in S&P 500 by the large technology stocks mean that their results will make or break the equity market over the summer months," warns Steen Jakobsen, chief economist and investment officer at Saxo Bank.

Second quarter earnings data will hit the market in increasing volume over the coming days when investors will hear from some of the market's biggest names, although particular scrutiny will be on the results of banks and technology companies. Most notably their guidance for the second half of the year, which could be key to whether the S&P 500 breaks sustainably to new post-virus highs or returns to the bottom of the range that's prevailed since June.

In turn that would likely play a significant role in dictating whether the Dollar Index breaks below the 78.6% Fibonacci retracement of the March rally that broke its fall on Tuesday, or if it climbs further, given the negative correlation between the index and the S&P 500. Likewise, whether the Pound-to-Dollar rate continues lower or mounts another challenge of its 200-day moving-average at 1.2699 could depend as much on Tuesday's J.P. Morgan results as it does on the outcome of this week's Brexit talks.

"Technology earnings hold the key to overall market sentiment and levels in US equities so names such as Amazon, Alphabet, Microsoft, Facebook, Apple and Nvidia must deliver for equities to remain at current levels. Our advice to investors is to be cautious going into the Q2 earnings season and avoiding having full exposure in equities as it could become a volatile summer," says Peter Garnry, head of equity strategy at Saxo Bank. 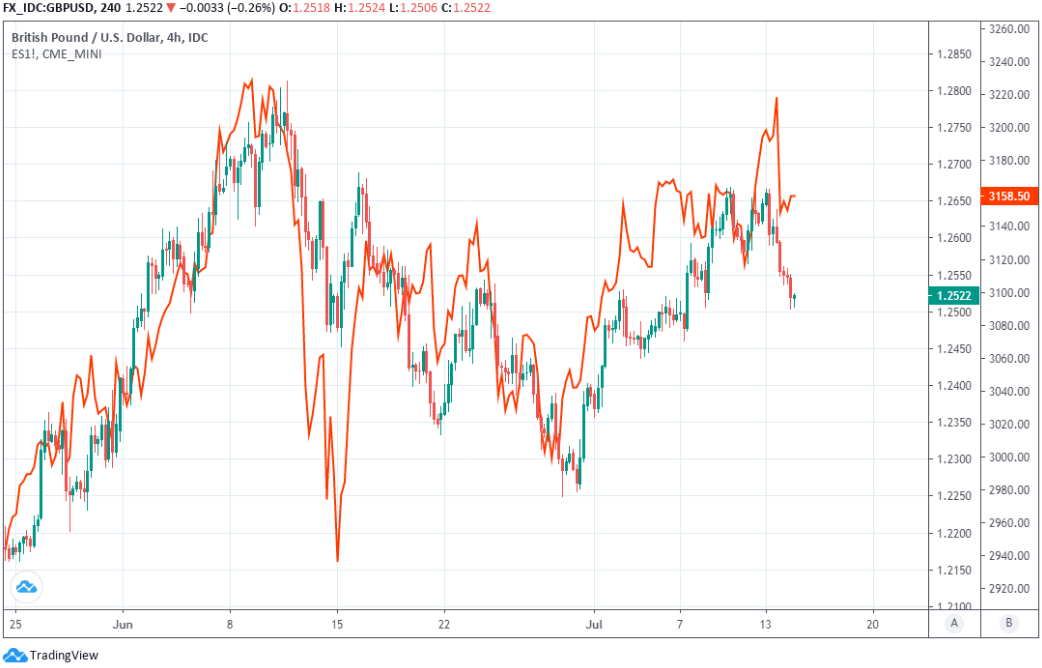