- GBP downside reduced as market looks to sell USD rallies.
- Risk asset recovery, Fed measures prove too much for USD.
- Brexit, BoE could still sink GBP but downside is diminishing.
- With each dark day for USD, though some warn of comeback.

Pound Sterling climbed 0.24% against the Dollar Thursday, taking its gain for the last week to 2.29% as investors continued to fall out of love with a Dollar that had ruled the major currency roost for nearly two years even before the coronavirus came along. The Dollar has now declined for three weeks on the trot, taking it down through a number of technical levels and potentially setting it up for even further losses up ahead.

Sterling's gains and the Dollar's pains date back to May 16 when stock markets broke to new post-liquidity crisis highs having retraced a large portion of their March losses by that point, with increases for stocks, commodities and other risk currencies coinciding with speculation about the prospect of a coronavirus vaccine being developed some time in the near future as well as meaningful progress in plans to unlock economies in Europe and the U.S.

"We discussed the improvement in the risk backdrop in the May 21 edition of Lines in the Sand, noting that many of our cross asset indicators were now converging to corroborate the risk rally. The removal of some of the cross asset headwinds for risk has been reflected in FX and bond markets over the last few weeks, with the USD registering a bearish breakout and bond yields attempting to move higher as risk sentiment firmed. As such, we head into the May US payroll report with a bearish outlook for both the USD and bonds. The break below the 50% retracement level and concurrent Ichimoku Cloud support served as the catalyst for capitulation and a shift to a bearish bias for the USD," says George Davis, chief technical strategist at RBC Capital Markets. 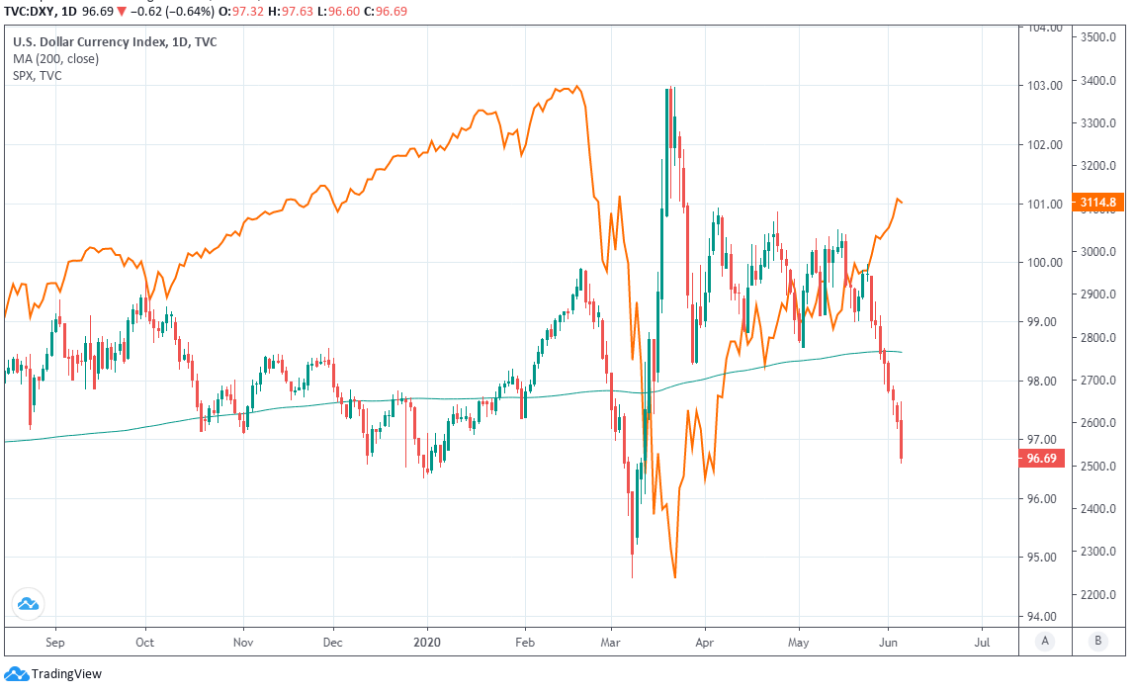 Davis tipped the S&P 500 stock index for to rise back above 3,000 on May 21 just as it was breaking above resistance in the region of 2,950 that had barred its path higher in late April and earlier in May, heralding the turnaround from earlier lows and subsequent overcoming of technical obstacles as a defining moment in the financial market narrative of the coronavirus crisis. He also warned that such price action would leave the greenback vulnerable and now tips the Dollar as a sell-on-rallies kind of currency.

This kind of environment is a game changer for a Pound-to-Dollar rate that had been seen at risk of falling to a fresh multi-decade low of 1.05 in the months ahead as recently as late May. Davis says the Pound now has scope to rise to 1.2726 and 1.2875 in the weeks ahead but that it must first achieve a daily close above 1.2643, where it formed a double-top reversal pattern in April. He sees the exchange rate finding support at 1.2467 and 1.2284 in response to any bouts of weakness but is not alone.

"GBP/USD’s attention remains on the top of the range at 1.2643/68. This is the location of the 200 day ma and we would allow it to hold the initial test, dips lower should find initial support at 1.2468/86 ahead of the short term uptrend at 1.2282, which is expected to hold. A daily chart close above the 200 day moving average at 1.2668 is required to target the 78.6% Fibonacci retracement at 1.2818," says Karen Jones, head of technical analysis for currencies, commodities and bonds at Commerzbank. 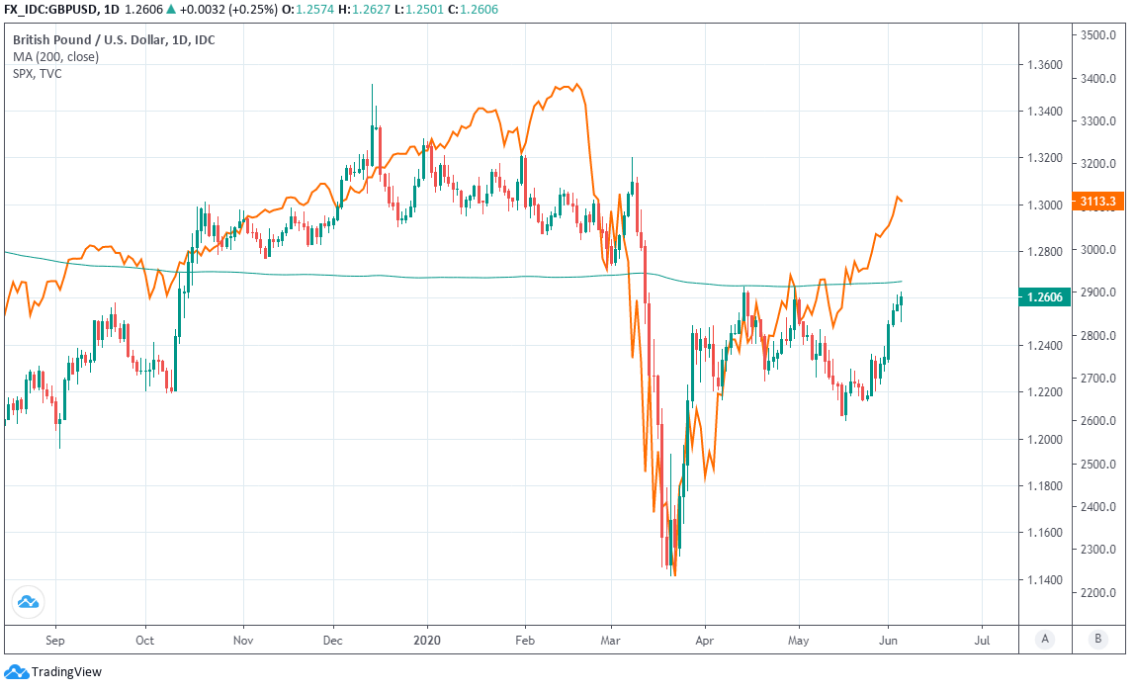 The Pound now trades with an upside bias that is expected to remain in place so long as the exchange rate remains above 1.2282, which coincides with a short-term trendline drawn on the below chart, and the further it rises from this level the more that the downside potential of the exchange rate is reduced for the months ahead. However, that's not to say there's no longer a risk of a lower Pound-to-Dollar rate, just that new multi-decade lows are off the table.

Sterling will be tested in June by a combination of monetary policy and political headwinds that will either undermine the nascent upturn or reinforce it. The Bank of England (BoE) is widely expected to increase its quantitative easing programme this month but could also reveal more about its newfound interest in negative interest rates as a policy tool, which might not be taken well by Sterling, but first the fourth round of Brexit talks concludes Friday.

Markets will be looking for progress in breaking the deadlock that's gripped trade talks with the EU, or an agreement for further as-yet unscheduled discussions, but without at least one of those the Pound might be likely to hand back some of its recent gains over the Dollar. 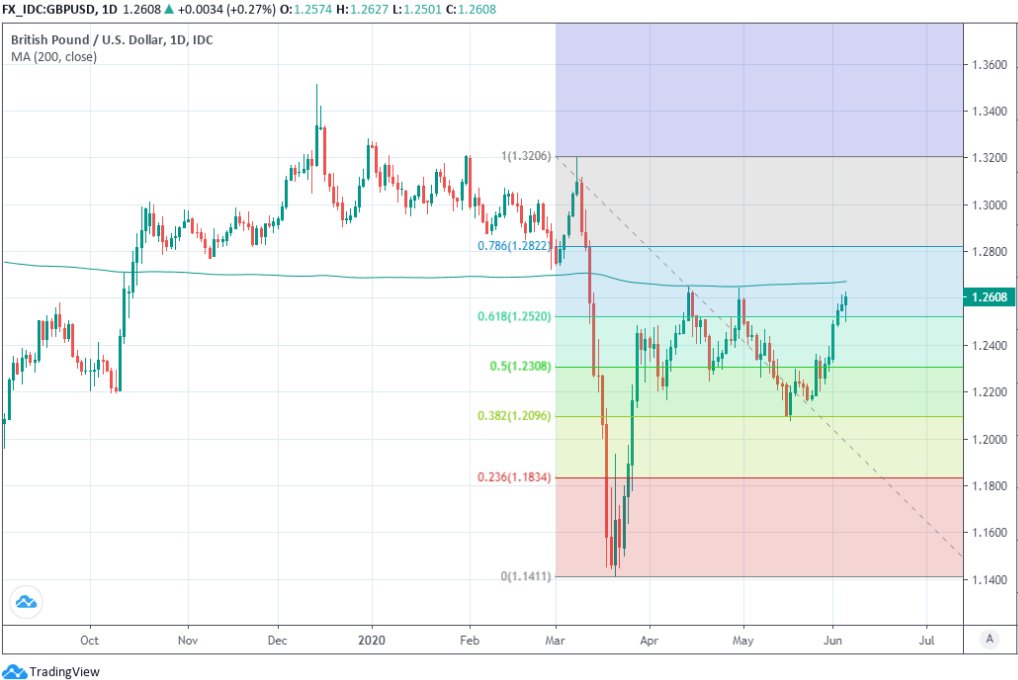 "Brexit headwinds may limit significant sterling uplift from here, with the $1.2670 zone being a key area of resistance. However, if signs of progress are made and the currency pair extends beyond $1.27 by the end of the week, further upside towards $1.30 could come into play," says George Vessey, a strategist at Western Union Business Solutions. "On the flipside, if the Brexit deadlock isn’t broken this week, this will likely ramp up uncertainty relating to a UK-EU trade deal before year-end. The fading prospect of an extension to the transition period may cause GBP/USD to reverse course back towards the $1.23 area as the risk of supply chain disruption increases."

Only "limited progress" has been made in trade talks thus far and this week's round is the last before a July 01 deadline for the UK to request from the EU an extension of the transition period. The government has maintained that it won't extend the transition so without an unexpected announcement of progress on Friday, or further rounds of talks, investors might begin to worry the UK is slowly but surely heading for something like a 'no deal' Brexit at year-end.

That might slow the pace of the UK's recovery from the coronavirus and would almost certainly dent the Pound because a trade relationship governed by World Trade Organization (WTO) terms is something economists almost universally expect to limit the country's long-term growth potential. Such an exit would play out amid the economic recovery from coronavirus and as the government grapples with the huge cost of the cleanup, which has lifted the budget deficit into the double-digit percentages of GDP and is exacerbating what was already the developed world's largest current account deficit as a share of GDP.

"A relatively hard Brexit deal means, in our view, permanently locking in some of the losses from the Covid crisis," says Kamal Sharma, a strategist at BofA Global Research. "We expect the pound to remain under pressure in the run up to the June deadline and particularly versus EUR, CHF and JPY. More significantly, we expect GBP volatility to outperform its G10 peers as idiosyncratic risks (Brexit) continue to build. We are cognizant that markets may still hold the view that the UK/EU will agree a transition extension later in the year. This is not a zero probability risk and could lead to some upside risks."