- GBP/USD rejected again by 200-day average, back below fib level.

- GBP/USD roadblocked by 1.2518 sixth time as risk rally peters out.

The Pound-to-Dollar rate came undone ahead of the Friday close and failed in its sixth weekly attempt to overcome a stubborn technical resistance level on the charts, leaving at risk of further declines over the coming days although the downside could be magnified if stock markets continue to fall.

Pound Sterling had rallied into month-end on Thursday but the final session of the week saw the British currency hand back most of its earlier gains as the raucous recovery in global stock markets appeared to end with April, leading to a sell-off in some risk-sensitive currencies on Friday. Stock markets, commodities and some currencies all rolled over heading into the weekend after President Donald Trump said he could impose tariffs on Chinese goods exports due to its handling of the initial coronavirus outbreak.

The prospect of a fresh U.S.-China trade skirmish coming at a point when the global economy is itself in need of intensive care prompted many major to fall more than 2% on Friday and lifted safe-haven currencies. The Pound's resulting losses against the Dollar saw it retreat further from the 200-day moving-average of prices at 1.2652 that was reached on Thursday, taking it back below the 61.8% Fibonacci retracement of the 2020 downtrend located at 1.2518 in time for the weekly close.

Sterling has now failed to close above the 1.2518 level for sixth consecutive weeks despite having spent much of that time attempting to get back above it. Technical analysts see a Pound-Dollar range-trade developing in the pipeline, although the British currency also has a strong positive correlation with the world's stock markets so if investors continue to "sell in May and go away" this week the Pound might find itself under continued pressure.

"GBP/USD has rallied higher towards the mid April high at 1.2648 and the 200 day ma. A daily chart close above the 200 day moving average at 1.2648 is required to target the 78.6% Fibonacci retracement at 1.2818. It is considered to be the last defence for the 1.3201/10 late January and March highs," says Karen Jones, head of technical analysis for currencies, commodities and bonds at Commerzbank. "Dips lower will find the near term support line at 1.2320 ahead of last week’s low at 1.2247." 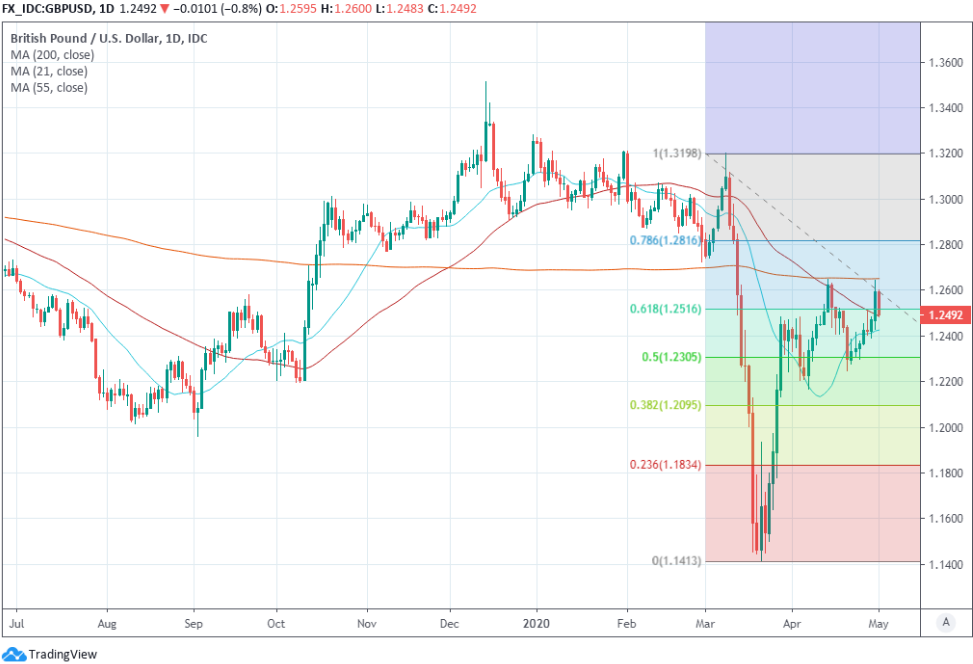 Above: Pound-Dollar rate at daily intervals. Back below 61.8% Fibonacci retracement of 2020 downtrend, key averages.

Commerzbank's Jones has been betting on an increase in the Pound-Dollar rate from 1.2348 and is targeting a move up to 1.2645, just beneath the 200-day moving average at 1.2652. However, and for the time being at least, this is expected to be a short-term move only.

Once beyond the three-week horizon Sterling is still in danger of achieving a fresh multi-decade low of 1.1463. Not seen since January 1985.

"A break below 1.23 would threaten a return to sub-1.20 levels to test the resilience of longer term demand. Resistance is 1.2650/55 (the above-noted 200-day MA signal). Short term trend oscillators are bullish for the GBP but longer-term oscillator signals are bearish still, suggesting choppy range trade may persist," says Juan Manuel Herrera, a strategist at Scotiabank.

The Pound plunged to 1.1409 against the Dollar in March and its lowest level since late 1985 but it recovered much of that lost ground promptly and spent the entirety of April consolidating that rebound, which played out alongside a recovery rally in stock markets and some commodities.

The S&P 500 stock index, arguably the global ringleader, rose 36% between its trough in late March and its end-April closing level of 2,967 as a bout of 'short-covering' was followed up by speculation about the prospect of a 'v-shaped' global economic recovery coming in the second half of the year. But the rally has left the index and many others trading at only a -12% discount to the record highs seen at the opening of the year and the full extent of the coronavirus damage is not yet known, much less the shape of any economic recovery.

"Sterling retreated from the Apr 14th swing high and 200-day SMA around 1.2650. The pair may now struggle to regain 1.25," says Mark Wilson, chief market analyst at markets.com. "The weekly charts show some pretty clear gravestone doji formations on the major indices that are typically bearish reversals in an uptrend. Some of these have very long wicks. A gravestone doji candle is formed when the open, close and low prices are close to each other and there is a long upper wick or shadow. The long wick indicates the bullish thrust was overcome by sellers and can mark the start of a new bearish trend. I’ll be looking for a MACD crossover for confirmation." 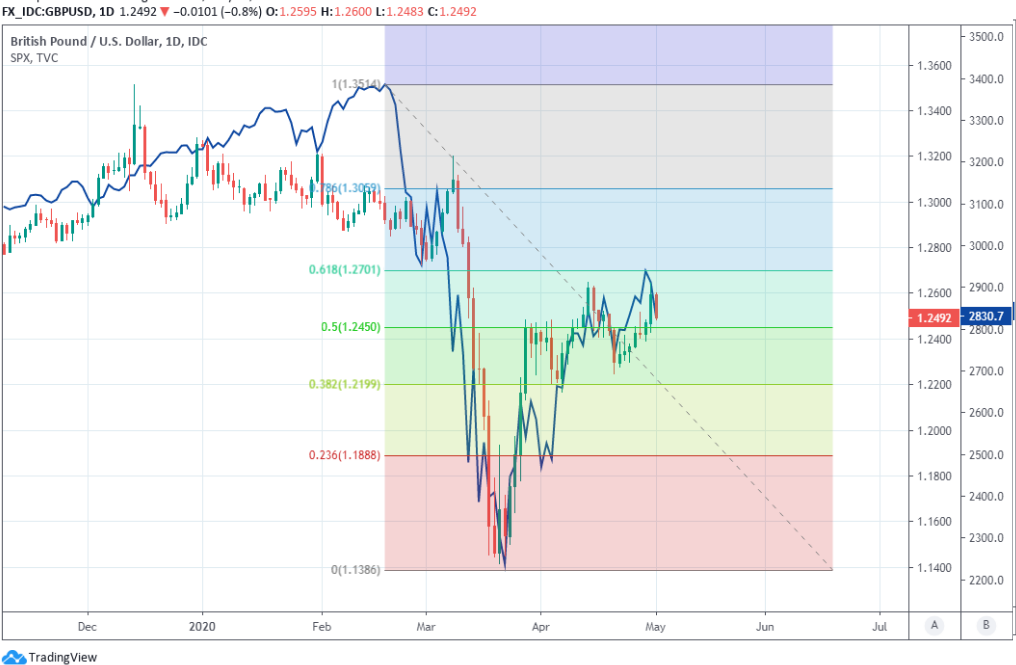 Above: Pound-Dollar rate at daily intervals alongside S&P500 index with Fibonacci retracements of 2020 S&P downtrend.

April brought a widespread recovery of risk assets including Sterling and the stock markets but an old adage says to "sell in May and go away." Investors did just that on Friday but with tensions between the U.S. and China rising again, while Friday's payrolls report threatens to produce a great depression era unemployment rate, some might feel inclined to keep selling stocks, commodities and other non-safe-haven assets this week.

That would be bad news for the Pound-Dollar rate on most occasions given its tight correlation with the S&P500 but more so this time around because any continued rollover of equity markets would be coming early in May, a month typically sees the Pound and commodity currencies underperform while the Dollar and other safe-havens outperform. Sterling has fallen an average -2.3% against the Dollar each year since 2010, according to BofA Global Research.

"April has historically been the most positive for GBP/USD with an average return of +1.8% since 2010. Month-to-date, GBP is already +0.68% versus USD. As it stands, the positive seasonality in April remains intact. However, as much as April is a positive month for GBP, driven in large part by the new UK tax year and corporate dividend repatriation of overseas income, May is a month where USD strength is the main driver for GBP/USD under-performance," says Kamal Sharma, a strategist at BofA Global Research. "May seasonality is consistent with our constructive near-term view towards the USD."

Seasonal flows and the market mood might be the dominant influence on price action but there's a host of other events that will also have an impact including the Bank of England (BoE) monetary policy decision and Friday's non-farm payrolls report from the U.S. Markets widely expect the BoE to increase the size of its quantitative easing programme before long to keep government bond yields under control and help absorb some of the additional supply of bonds that's hitting the market due to the coronavirus, although few expect the bank to act this week. Any surprise expansion of the £645bn bond buying program at 07:00 Thursday might weigh on the Pound.

"Upside to GBP/USD should be fairly limited as (a) EUR/USD is likely to struggle to break materially above the 1.10 level...GBP/USD should struggle to move above 1.2600. The 200-day moving average of 1.2655 should act as a strong resistance." says Petr Krpata, chief EMEA strategist for currencies and bonds at ING. "Combined with a US earnings season so far characterised by little guidance, we expect a slightly softer risk environment to provide the dollar with a little support. The US calendar also sees Services data and the March trade balance. Talking of trade, we are starting to hear a little more of Washington’s plans to retaliate or seek compensation from China over Covid-19. Another phase in the trade war is the last thing the world economy needs right now and is a factor that could undermine expectations for a recovery." 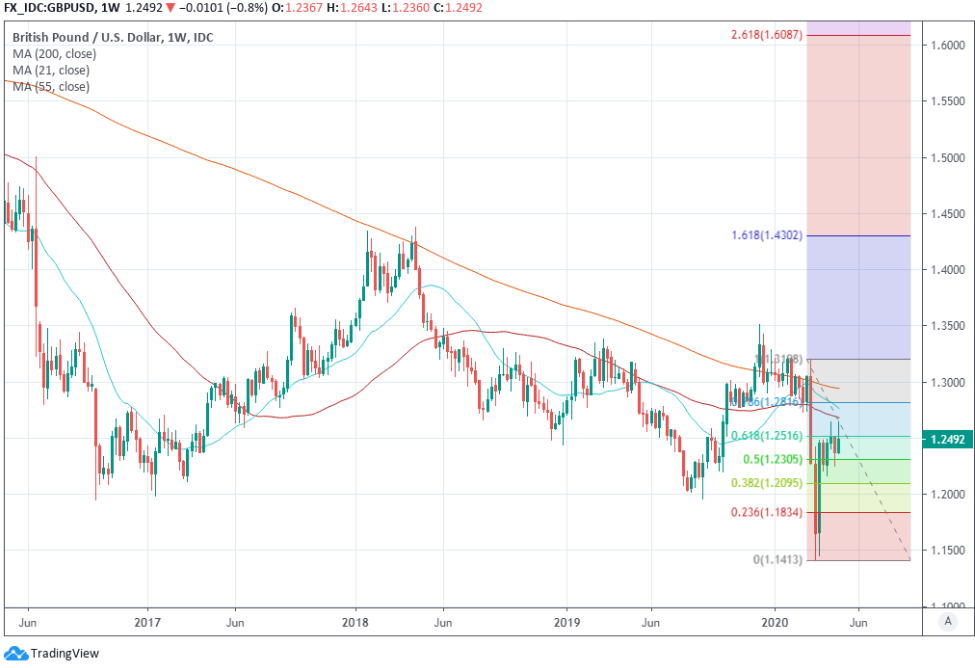 Above: Pound-Dollar rate at weekly intervals. Back below 61.8% Fibonacci retracement of 2020 downtrend, key averages.