- GBP holds 1.29 but recovery could be short-lived.

- Looks for steady hand of Fed to lend USD strength.

- Others eye changes to forecasts of a softening USD.

The Pound has reclaimed a key level against the Dollar but gains could prove to be short-lived because the technical picture remains bearish on the charts and forecast downgrades could be just around the corner.

Sterling has recovered the 1.29 handle since Sunday's open after being forced into a weekly close below it by a stronger Dollar on Friday, with stronger-than-expected economic growth data aiding the recovery on Tuesday.

Optimists say faster-than-expected growth in December could be the beginning of a 'Boris bounce' from a pre-election slowdown but the rub for Sterling is that it might not come soon enough to save it from further losses to the Dollar.

This is partly because the 1.29 level is widely regarded as the last technical defence of the late-2019 uptrend so any confirmed break of it would be a major technical development and a negative omen for the Pound-Dollar rate. 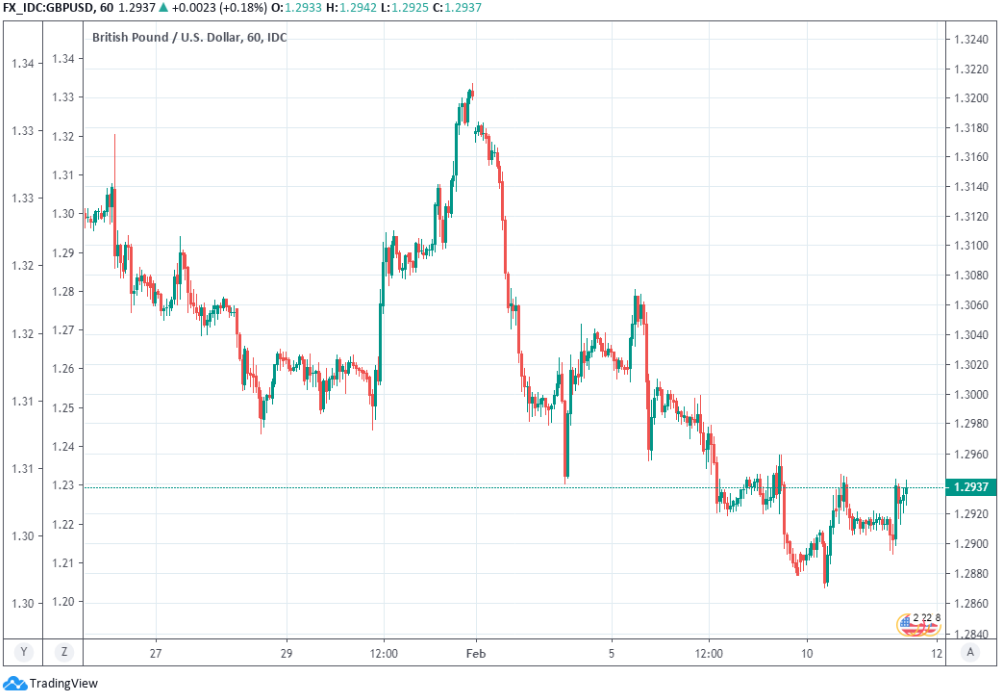 "GBP/USD has not sustained the initial break of the December low at 1.2905, and it is possible that this was the end of an ‘a-b-c’ correction, but it also looks like a potential top. We are biased towards the latter,"  says Karen Jones, head of technical analysis for currencies, commodities and bonds at Commerzbank. "Failure at 1.2905 put the 55 week ma at 1.2799 and the 200 day moving average at 1.2690 back on the plate."

Jones says rallies will see the Pound meet resistance at 1.2954 and 1.3056 in the coming days, and that the latter needs to call a halt to any recovery in order for her technical "top" thesis to be correct. However, she's not alone in looking for the path higher to be road-blocked by technical factors as strategists at Lloyds Commercial Banking are also looking for the downside to prevail.

"Momentum studies remain in bear mode and our bias is still for a move towards support in the 1.2750-1.2700 region – with the risk of an overthrow towards 1.2500. However, we still view that region as the ideal place for the bottom of a medium-term range to develop. Prices would need to recover back through resistance in the 1.2960-1.3010 region to suggest that low is developing earlier than expected," says Robin Wilkin, a cross asset strategist at Lloyds. 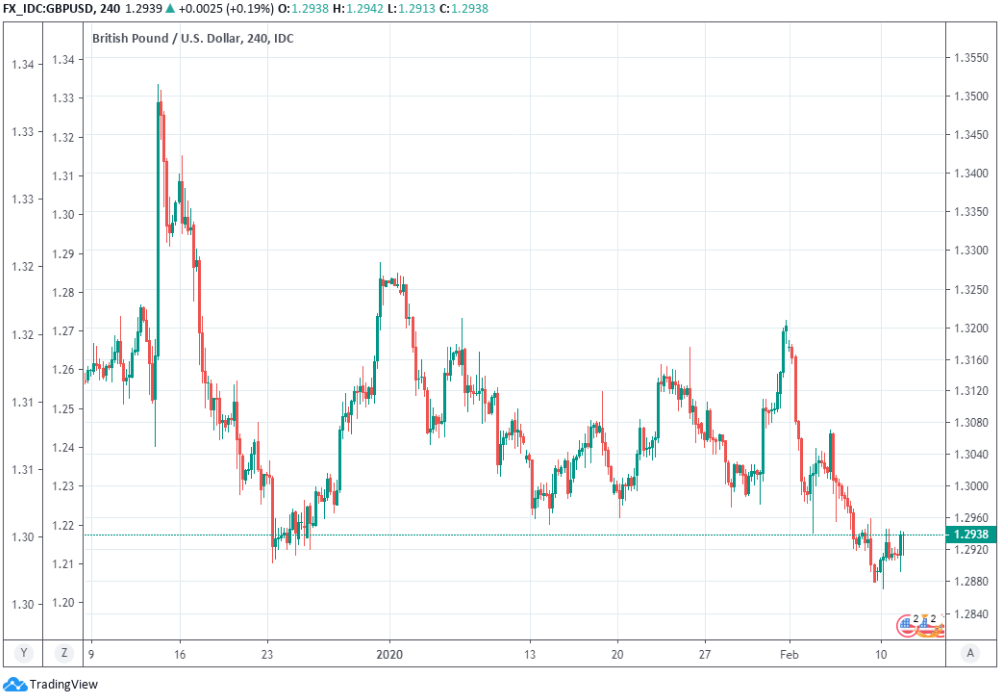 "GBP/USD has struggled since December 2019 to sustain a move below 1.2900. But if this levels gives way, the next important support levels for GBP/USD are offered at 1.2870 and 1.2800," says Elias Haddad, a strategist at Commonwealth Bank of Australia.

While Tuesday's moves have taken Sterling back above 1.29 both Lloyds and Commerzbank appear to view reclaimation of the threshold as simply a correction within a fast evolving downtrend that began with a break below the 1.2960-1.30 area the previous week. Both Jones and Wilkin are betting on fresh declines although the technically oriented are not the only ones looking for the Pound-Dollar rate to resume its descent back to pre-election levels.

"The 40bp of Fed easing priced in for this year seems excessive and a repricing should support continued USD outperformance," says Adam Cole, chief FX strategist at RBC Capital Markets in a note to clients Monday. "Expectations for UK-EU trade negotiations [are] more likely to drive GBP. At this early stage, we expect news flow to continue to suggest the two parties are far apart and the risk of no deal at the end of the transition period is high."

RBC's Cole told clients on Monday to bet the Pound falls to 1.2650 before the week is out in part because the bank has an increasingly bullish short-term outlook for the Dollar, which has been boosted of late by both safe-haven resulting from fears about the ximpact of coronvirus on China's economy as well as by signs of a January uptick in economic growth that's yet to be matched by any other developed world economy.

Others recommended similar trades, or made bearish forecasts, on Friday. 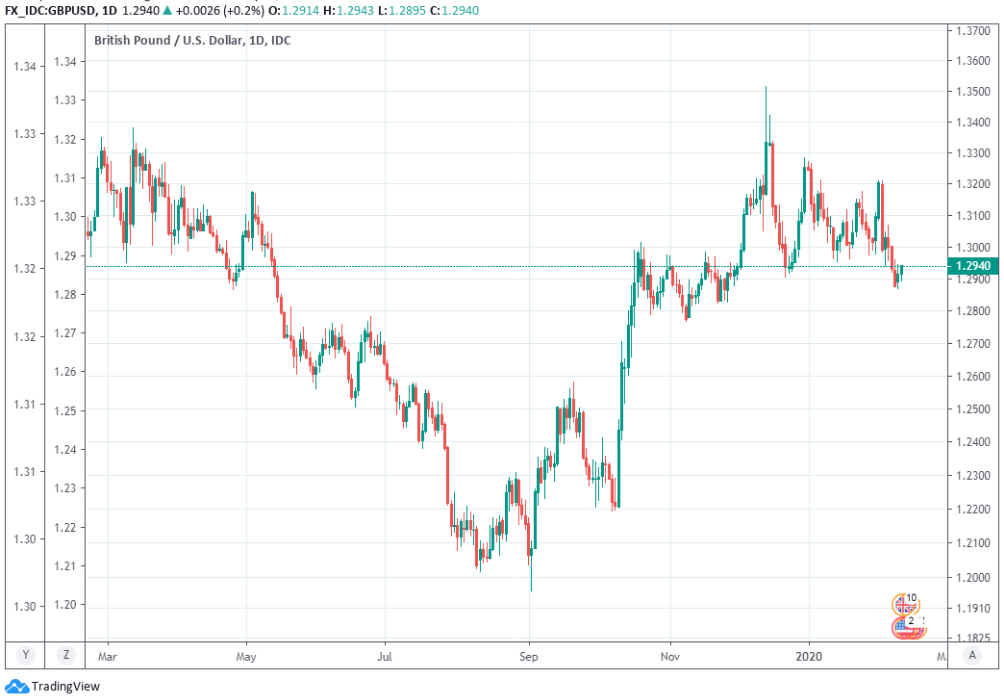 UK growth picked up in December but the quarterly expansion slowed from 0.4% to 0% and annual growth slowed from 1.4% to 1.1%, leaving the UK expanding at just more than half the 2.1% pace seen across the Atlantic in the final quarter. In addition, PMI surveys have pointed to a U.S. economic acceleration in January while Tuesday's strong official number for December could be said to leave the UK at increased risk of underperformance in January even if only because of the statistical 'base effect'.

This potentially-widening growth differential is a major predicament for the Pound because it risks entrenching an already deeply negative 1% interest rate differential with the U.S., which has left the Dollar not only looking far more attractive to investors, but also expensive to bet against. And the more the growth differential widens in favour of the Dollar, the more likely it becomes that analysts are left with little choice but to downgrade forecasts for the Pound-to-Dollar rate in the coming weeks.

Chairman Jerome Powell told Congress Tuesday that so long as the Federal Reserve outlook for steady growth, full employment and near-target inflation remains intact then the current 1.75% Fed Funds rate "will likely remain appropriate." However, there's still uncertainty over whether the Bank of England (BoE) will be able to avoid a rate cut this year, which would turn the rate differential further against Sterling.

"Demand for the US dollar remains solid with coronavirus fears unlikely to diminish in any meaningful way and hence, while we see certain FX pairs as looking a little stretched in favour of the dollar (see below), we do not see any great reversal of dollar support. Evidence of ROW growth relative to the US improving has had a setback and hence we have to acknowledge a set-back to our US dollar forecast profile over the short-term," warns Derek Halpenny, head of research, global markets EMEA and international securities at MUFG. 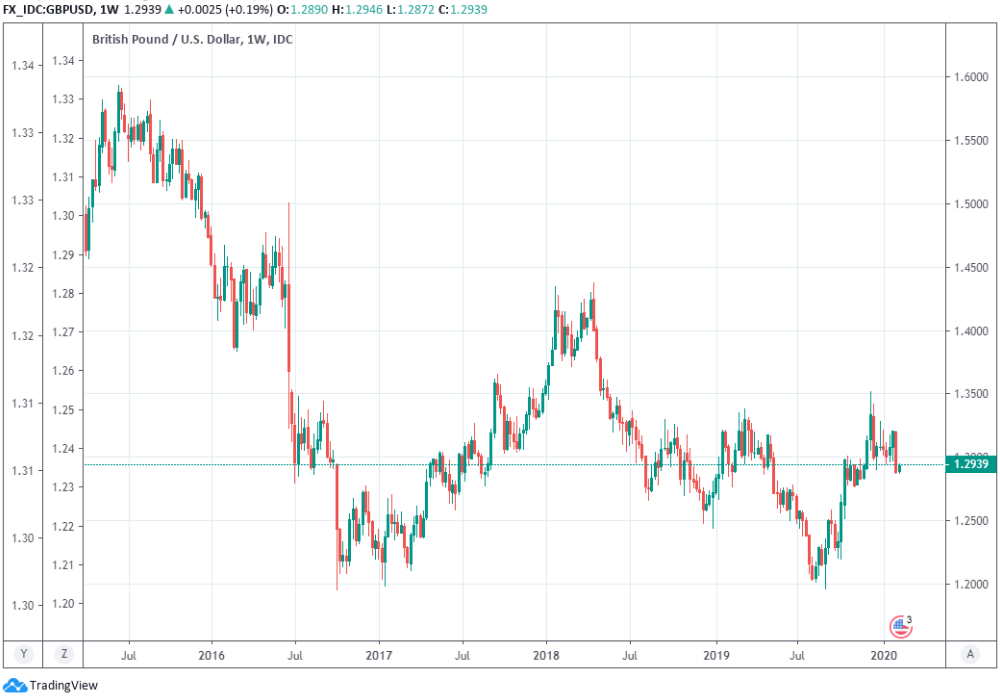