- GBP to remain on front foot this week but is vulnerable.

- Commerzbank and UBS both short-term buyers of GBP.

- But election polls set to remain in the driving seat of GBP.

The Pound-to-Dollar exchange rate is being tipped to remain on its front foot this week but although gains will be limited a series of 'resistance levels' on the charts, according to technical analysts studying the charts, although others are warning that Sterling would be likely to retreat if the Conservative Party poll lead shrinks at any point.

Sterling clocked up a 1% gain over the Dollar last week after Prime Minister Boris Johnson was seen improving his chances of securing a parliamentary majority in the December 12 general election and as U.S. bond yields retreated further from their November 08 high.

American 10-year bond yields had attempted to break above the 2% level earlier in November but failure to clear that hurdle has since seen the benchmark of government borrowing costs retreat back to 1.83%.

Lower yields have tempered appetite for the Dollar and given other currencies a look-in with investors, while Prime Minister Johnson's position in the election polls helped make Sterling the second best performer against the greenback for the week, behind only the New Zealand Dollar.

Technical analysts at Commerzbank say the Pound is now entering what its likely to become its second consecutive week of gains.

"GBP/USD continues to attempt to recover from the 1.2764/ 23.6% retracement. It is currently probing the 20 day ma at 1.2872. Only above here will leave the market well placed for another attempt at the psychological resistance at 1.3000. Directly above here we have the 200 week ma at 1.3122 and the 1.3187 May high and these remain our short term targets, but we look for the market to be capped here," says Karen Jones, head of technical analysis. 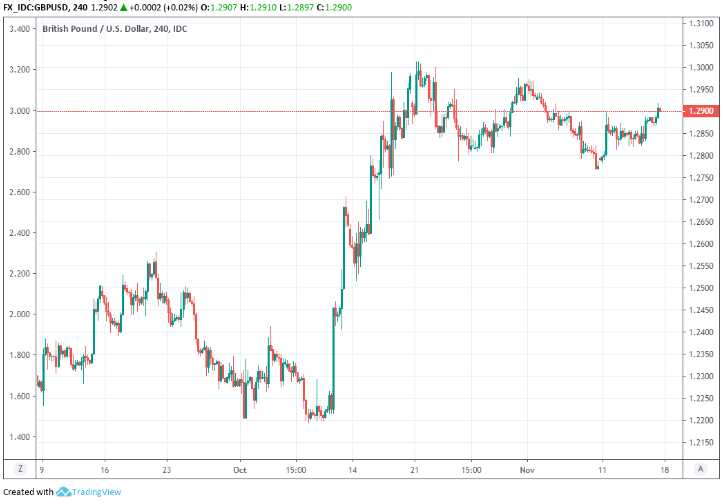 Jones bought the Pound-to-Dollar rate around 1.2840 last week and advocated that clients of the bank do the same. She's targeting a move up to 1.31 over the coming days and weeks but says she'll exit the trade at that point. She's not alone either because the FX trading desk at UBS said last week that they're still happy to buy the Pound-Dollar rate upon any dips back toward the 1.28 level.

Nair said Friday that the Brexit Party decision to withdraw from three marginal seats in which the governing Conservatives are locked in a reportedly tight race with the opposition Labour Party is good for the Pound. The Brexit Party has now withdrawn the bulk of its 600 earlier candidates for election, leaving Boris Johnson and his Conservative Party as the only the option for 'leave' voters in all seats that they currently hold and in some Labour-held marginal seats too. 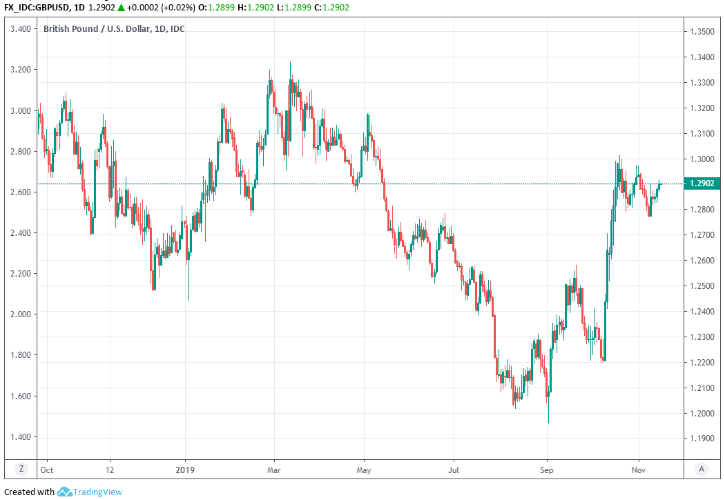 The Dollar softened in the latter half of last week as U.S. government bond yields continued to retreat from earlier highs in response to fresh doubts over whether the 'phase one deal' between the U.S. and China, as well as due to economic concerns, although some strategists say the downside will be limited in the days ahead.

Minutes of the October Federal Reserve (Fed) interest rate meeting are the main event in the calendar for the Dollar although after a series of more up-to-date remarks from various Fed policymakers over the last week, few anticipate the minutes having much impact on the market. That could leave investors again looking to the White House and trade talks with China for cues on the Dollar, not least of all because the economic calendar is otherwise quiet.

"The dollar did lose some momentum after a two-week run, but is still lacking a tangible negative catalyst, so it may be able to retain most of its recent strength in the coming days," says Chris Turner, head of FX strategy at ING. "The contradicting news flow on trade negotiations continues to generate market noise but it can neither trigger a major correction in the supported risk environment nor fuel a decisive rally in pro-cyclical assets."

Turner says the Fed minutes should confirm that, after three rate cuts thus far in 2019, policymakers intend to sit back and observe the results of their work into year-end rather than taking any further actions. Fed Chairman Jerome Powell suggested said last week that inflation remains "muted", the growth outlook is favourable and that it would take a "material reaassessment" of the outlook to get the bank cutting rates again any time soon.

"The USD’s recent rebound has lost some upward momentum over the past week after 10-year UST yields failed to break back above 2.00%. The pullback in US yields has encouraged low yielding currencies such as the JPY and CHF to strengthen. Market participants remain optimistic over a partial US-China trade deal but there have been only modest spill-overs into the FX market," says Derek Halpenny, head of research, global markets EMEA & international securities at MUFG.

President Trump told The Economic Club of New York late Tuesday that "a significant phase one trade deal with China could happen" but then threatened that "If we don’t make a deal, we’re going to substantially raise those tariffs. They’re going to be raised very substantially." The remarks underlined a recent change in White House rhetoric around the agreement that was said to have been struck with China on October 11, which now seems less like the sure thing it was billed as just a few weeks ago.

Those remarks and their uncertain implications for the trade war and U.S. economy are what prompted the turn lower in government bond yields.

A Conservative Party majority would enable the Prime Minister to take the UK out of the EU with an agreement that averts a 'no deal' Brexit and provides businesses with some kind of certainty about the country's trade arrangements over the coming years. That would also keep the opposition Labour Party and its controversial policy agenda from the doors of 10 Downing Street and possibly even slow the decline in business investment that's been ongoing since the referendum.