- USD recovers ground as dust settles on payrolls and Fed.

- But earlier cuts are boosting attractiveness of high yielders.

The Dollar advanced against most rivals Monday as the dust settled on last week's rate cut from the Federal Reserve (Fed) and trade related headlines, which have for the time being at least, placed a floor under the U.S. currency.

U.S. interest rates are no longer the highest in the developed world but they're unlikely to fall any further in the short-term, policymakers sggested strongly last week, and investors are being encouraged by Commerce Secretary Wilbur Ross to believe a 'phase one' U.S.-China trade deal will be delivered later this month.

That's a double-barreled dose of goods news for the global economy and 'risk' assets, even if it brings with it a mixed bag of implications for the Dollar.

The combination of lower borrowing costs and a lesser threat to growth stemming from the trade war is being tipped to boost higher-yielding emerging market currencies this week, but it could also serve to put a floor under the Dollar Index in the short-term by preventing further losses to low-yielding currencies like the Euro and Japanese Yen. Those two latter units account for more than 60% of the Dollar index.

"The latest batch of US data supported the Fed’s decision last week," says Lee Hardman, a currency analyst at MUFG. "It will reinforce expectations that Fed policy is on hold which should favour a continuation of the current low volatility environment in financial markets. FX volatility has fallen back to year to date lows over the past month and is encouraging the rebuilding of carry trades thereby boosting demand for high yielding currencies such as the Russian rouble, Turkish lira, and South African rand." 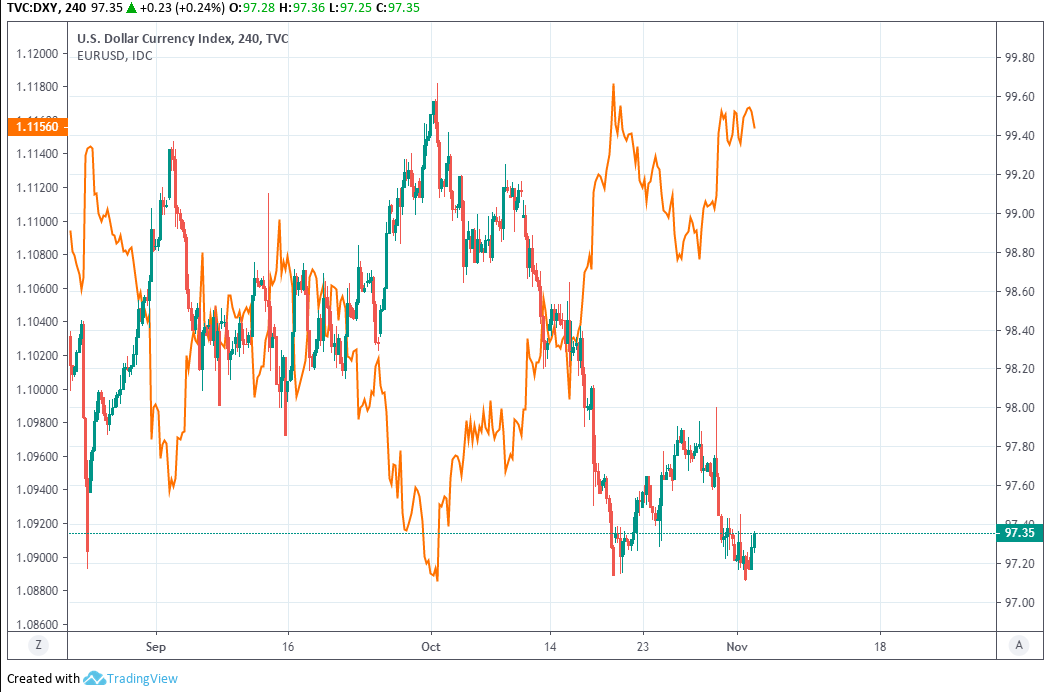 Having the highest interest rate among so-called G10 currencies had been a boon for the Dollar, drawing not only investors who were seeking yield, but also those wanting a safe harbour to moor up in while the global economy is on its back foot and the trade war rages on. However, the outlook was thrown into doubt in July when the Fed began to cut its interest rate in an effort to protect the U.S. economy from an ongoing global growth slowdown.

Fed Chairman Jerome Powell said last week it would take a "material reassessment" of the economic outlook for rate setters to come to the conclusion that further policy changes are becoming appropriate, indicating the Federal Open Market Committee has all but decided to pause its cycle of rate cuts. This was after the bank reduced the Fed Funds rate range by 25 basis points to between 1.5% and 1.75%, which was its third cut in 2019.

"Generally speaking the data provided by the Bureau of Labor Statistics was not suited to end the dollar weakness caused by Fed chair Jay Powell last week. A contributing factor is that at least a temporary agreement in the US-Chinese trade conflict seems to be close. “Trade war” and based on that “global economic concerns” were factors which USD bulls had used as arguments," says Ulrich Leuchtmann, head of FX strategy at Commerzbank.

The Fed's guidance last Thursday has marginally reduced the appeal of the Dollar to investors but, at the same time, has made clear to the market that an all-out 'easing cycle' is unlikely in the short-term. That guidance was, in part at least, vindicated Friday by a strong non-farm payrolls report for the month of October and stabilisation in the Institute for Supply Management (ISM) manufacturing PMI following months of decline. 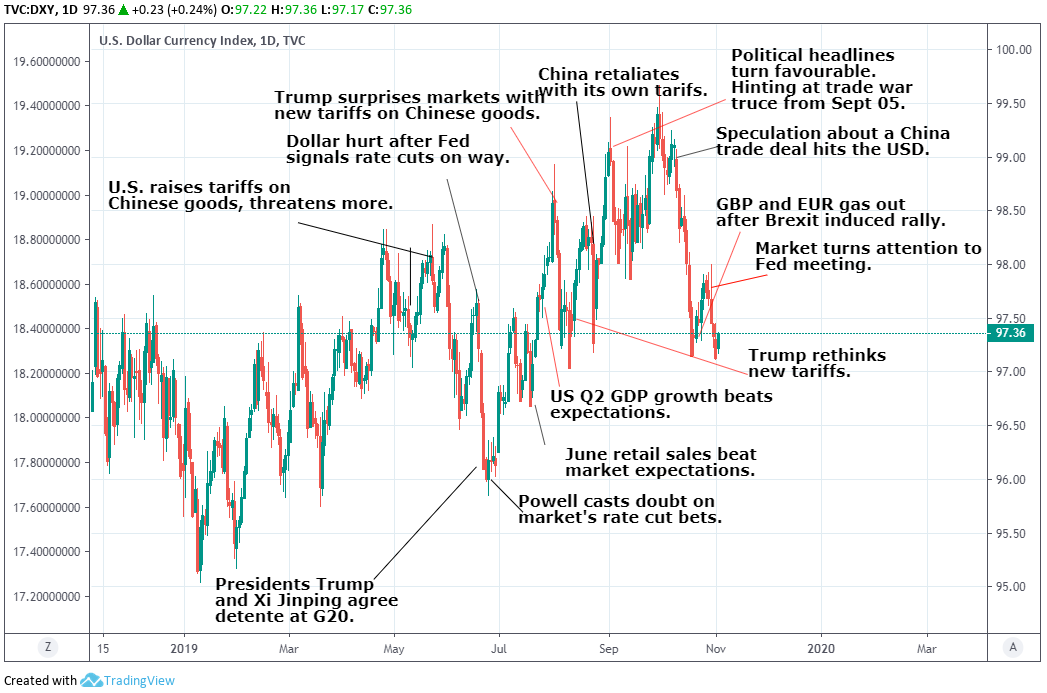 Many analysts had said it would take a protracted "cycle" of rate cuts in order to undermine the Dollar, which is still up 1.34% for 2019 after having advanced against all major rivals other than the equally high-yielding Canadian Dollar, the safe-haven Yen and Pound Sterling for the year-to-date. But with the Fed having cut three times and much of the available data now pointing to stabilisation ahead, the argument for further easing has weakened.

"USD can ease further this week as downside risks to global growth continue to dissipate. US Commerce Secretary Wilbur Ross noted the US and China are on track to conclude an initial trade agreement with China this month and licenses for American companies to trade with China’s Huawei Technologies would be available “very shortly”. Ross also added that it may not be necessary to go ahead with tariffs on imported European automobiles," says Elias Haddad, a strategist at Commonwealth Bank of Australia.

Commerce Secretary Wilbur Ross said at the weekend the 'phase one' U.S.-China trade agreement proclaimed on the October 11 by President Donald Trump will be signed later this month even though the APEC summit in Chile that was due to host the ceremony has now been cancelled. If the pact, which has not yet been written anywhere, is finalised and signed then it would be boon for the global economy.

It's unclear if sufficient progress will be made in the next six weeks to prevent new U.S. tariffs from hitting Chinese consumer goods on December 15, even if it has already stopped other levies being implemented, but the improved prospect for avoiding a trade conflict between the U.S. and EU will prevent further damage to the European and global economies while bolstering the outlook for non-Dollar currencies into year-end.

"Price action is still relatively tepid at best and most USD pairs have yet to administer the knockout blow suggesting that a major USD down move is gearing up," says John Hardy, chief FX strategist at Saxo Bank. "The EURUSD-heavy USD index (58% of the index) shows that we have yet to see a full breakdown in the US dollar, which doesn’t really swing into gear until the index has properly taken out the local 97.00 pivot on a daily close and really quite a bit more when we zoom out." 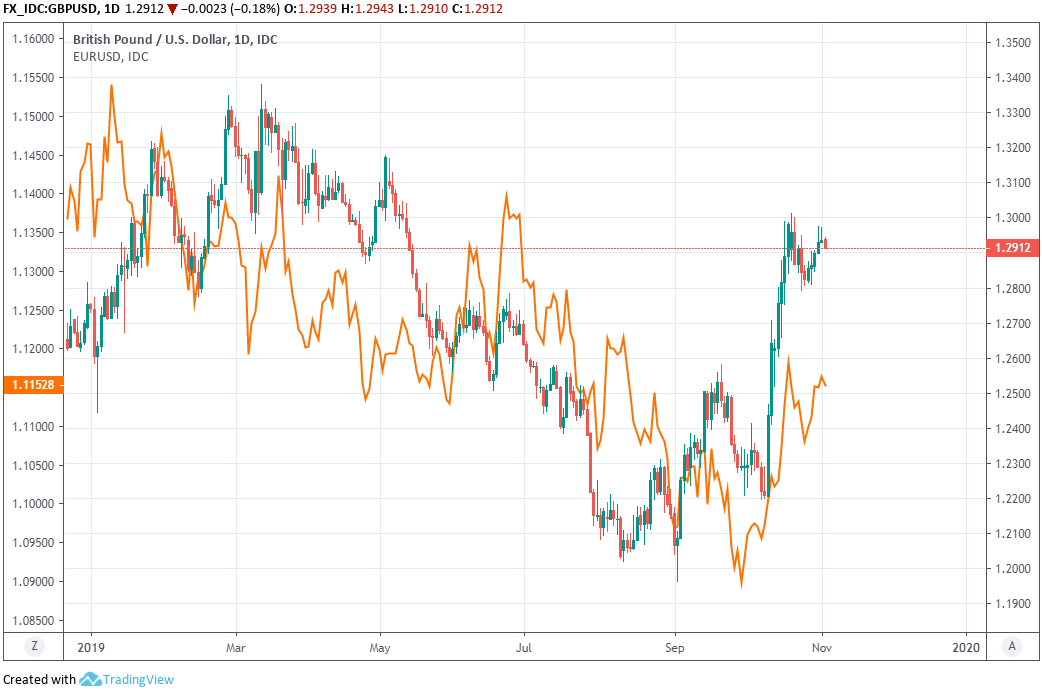 The White House will decide this month whether to levy tariffs on U.S. imports of cars from Europe and Japan after President Trump delayed for 180 days in May, new tariffs that it's claimed are necessary for national security reasons.

"The current deadline for Trump to make a decision is 14 November. But despite a recent escalation in the Airbus-Boeing dispute, the signs are that he will kick the issue into the long grass once more," says Constantine Fraser, a European political analyst at TS Lombard. "There is little support in Washington for levies on car imports. Although European cars have been a bugbear for Trump for a long time, he is fairly isolated in his irritation. In contrast to the China trade war, there is significant opposition to car tariffs on Capitol Hill."

Any decision to impose tariffs on cars coming from Europe and Japan would open a new front in the trade war, which has so-far remained a bilateral affair between the U.S.-China trade war. This would amplify significantly the risks facing the global economy, which has already slowed in the last year due to a combination of trade tensions and rising U.S. borrowing costs. The Fed raised its interest rate nine times in the three years to the end of 2018.

Such a decision would likely lift the 'broad' value of the Dollar too because it would be almost certain to weigh on the Euro, which on its own accounts for more than half the Dollar Index. However, and conversely, a decision to eschew car tariffs would remove a major weight from the shoulders of the European single currency and so could ultimately undermine the Dollar from mid-month onwards. Meanwhile, Pound Sterling is as ever set to remain transfixed by Brexit and a general election that's scheduled to take place on December 12.

"GBPUSD is pulling back from the 1.2950 area, and we believe this has to do with the fact that Labour looks like it is starting to close the gap with the Tories in the voting intention polls. Last week, we offered a long GBPUSD position at 1.2944 with a stop loss at 1.2790. We'd now be lifting that stop to 1.2850 just as a precaution. We like the long-GBPUSD trade because it reflects the scale of Boris Johnson's election gamble, but we'll accept the egg on our face if it all goes wrong - and it could," says Stephen Gallo, European head of FX strategy at BMO Capital Markets.