The U.S. Dollar is set to stay strong in 2020 for five main reasons, say analysts at Nordea Bank, the Scandanavian lender and investment banking provider.

The first is that growth in the U.S. compared to the rest of the G10 remains relatively high and although its outperformance has been falling since the summer it is still relatively-speaking quite strong. This, in turn, supports the U.S. Dollar.

The chart below shows the relative economic performance of the U.S. Dollar versus the rest of the G10. Although it has been falling recently it has still not crossed below the Dollar Index line, suggesting continued resilience. 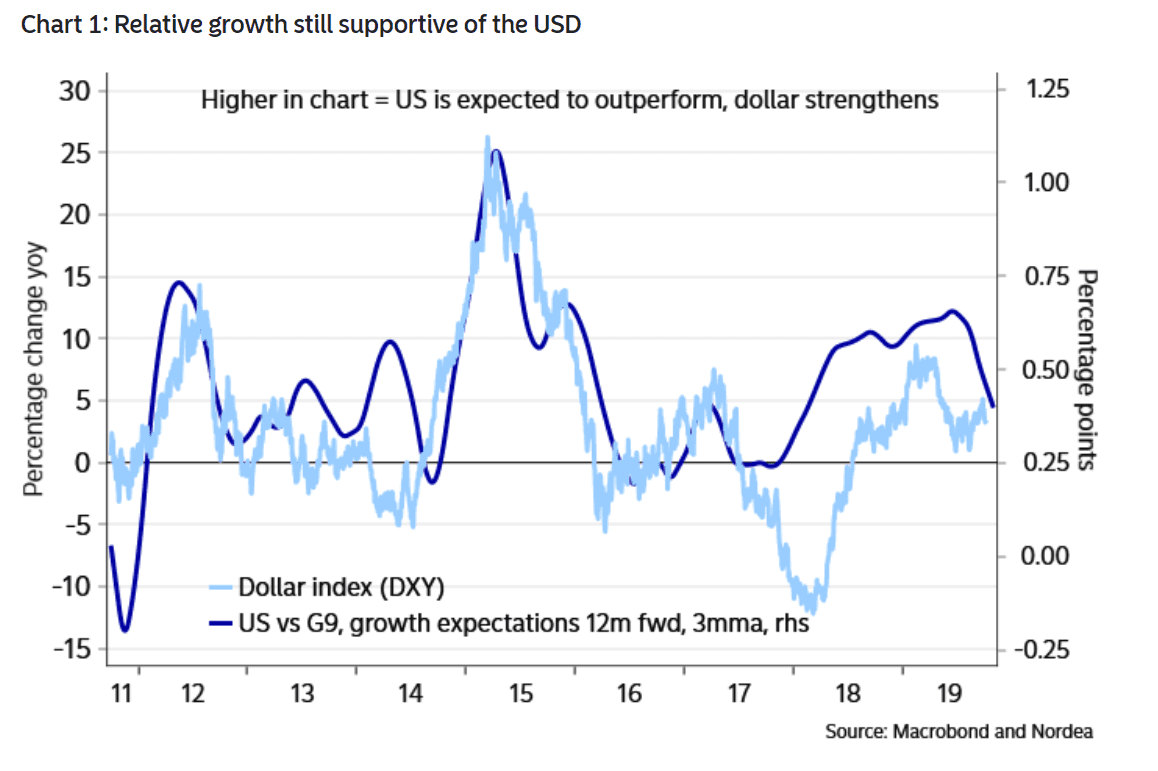 The comparative weakness in Eurozone data is another supportive factor for the Dollar given the disproportionate contribution of EUR/USD in the trade-weighted Dollar Index. 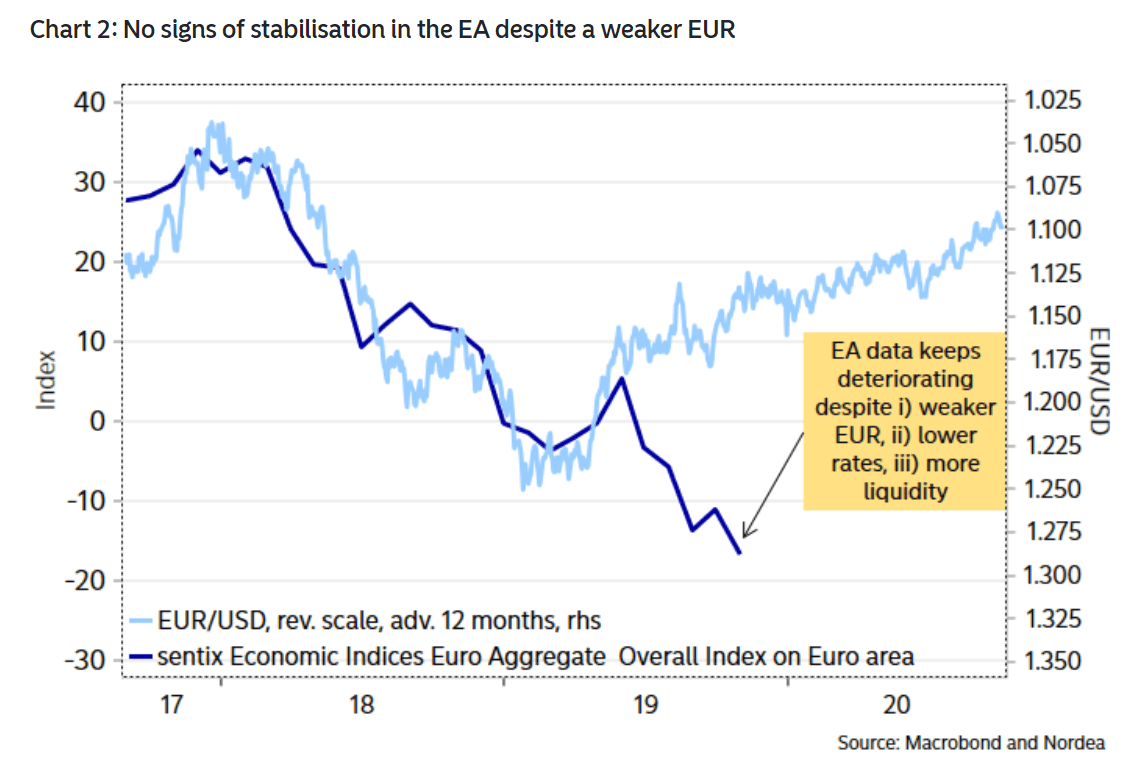 “Even as US growth estimates are lowered, we argue that the country is still outperforming well enough to keep the USD firm,” says Martin Enlund, chief analyst at Nordea Bank.

The second reason for expecting a strong Dollar is that U.S. inflation remains relatively high.

Though often portrayed as an economic bugbear, inflation is now a marker of growth in a low-growth world, and this has changed the way economists interpret the indicator. High inflation is now a sign of rising demand and a thriving economy.

In relation to this, “US core inflation has most recently topped expectations three times in a row,” which is “is positive news for the USD,” says Enlund, “especially since our models suggest that a further acceleration in US core inflation may be on the cards.”

Not only that but core inflation in the Eurozone remains perennially sluggish in comparison, which doesn't bode well for the outlook for the Dollar’s main counterpart.

The third reason is that U.S. base interest rates, which are set by the Federal Reserve (Fed), still remain well above those of any other G10 economy.

Higher interest rates lead to greater foreign capital inflows due to the attractive draw of higher interest returns for foreign investors, and this supports demand for the currency.

As the table below shows, courtesy of FXstreet, the U.S. still leads the G10 when it comes to interest rate advantage.

There are risks to the outlook for U.S. rates - the Fed could decide to flood the market with liquidity or cut interest rates more aggressively, however, Nordea’s Enlund does not see this as a game-changer.

“Overall, we believe that the US Fed will cut rates and add liquidity (temporarily), but the outlook for relative rates and liquidity suggests that these changes will not be drastic enough to significantly dent the greenback,” says Enlund.

The fourth reason for expecting the Dollar to continue trading robustly is what is known as the U.S. Dollar ‘Smile’ theory.

In fact, the only time the U.S. Dollar does not outperform is when the U.S. economy slows down whilst the rest of the world is in a synchronised growth cycle.

Since this is not currently the case, the U.S. Dollar should continue to stay strong.

The ‘smile’ part of the theory relates to the shape of an idealized curve of the U.S. Dollar according to the theory. 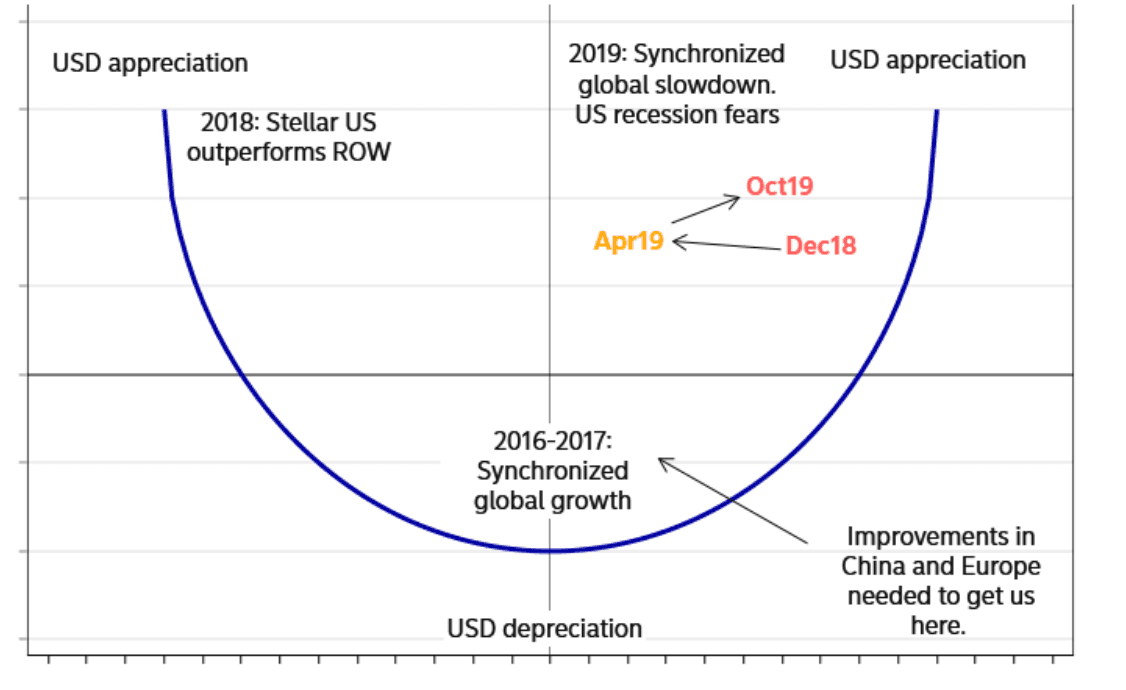 The fifth reason for expecting a strong Dollar is politics. From a political perspective the Dollar is favoured since historically it benefits from trade war uncertainty because of its safe-haven status.

Although a deal has been agreed with China it has not been codified and signed, and there is a chance it will not happen.

U.S. lawmakers recently approved support for protesters in Hong Kong angering Beijing in the process, and the Chinese now want more concessions before buying the U.S. agricultural produce they promised to purchase in the original agreement.

There is a risk the deal could quickly unravel, leaving the Dollar stronger.

Not only that but trade tensions between the U.S. and Europe are also ratcheting up after the WTO allowed the U.S. to impose tariffs due to its ruling Airbus unfairly benefitted from state aid.

A similar ruling for U.S. rival Boeing in a few months is likely to come out against the U.S. and could intensify the tit-for-tat.

Again, the Dollar will probably come out of a trade war with Europe stronger than the Euro.

The threat of impeachment of the U.S. President over the Joe Biden scandal is also likely to be more not less supportive of the Dollar going by past experience, says Nordea.

When Clinton was impeached the U.S. Dollar started a multi-year rally, and the same is possible this time, says Enlund.

“As far as we can tell, however, the current crop of allegations are no more serious than anything else that has been thrown at him over the course over the past three years, so at this time we would not make much of it. Furthermore, the impeachment of President Clinton in 1998 did not do much to derail the USD,” says the analyst. 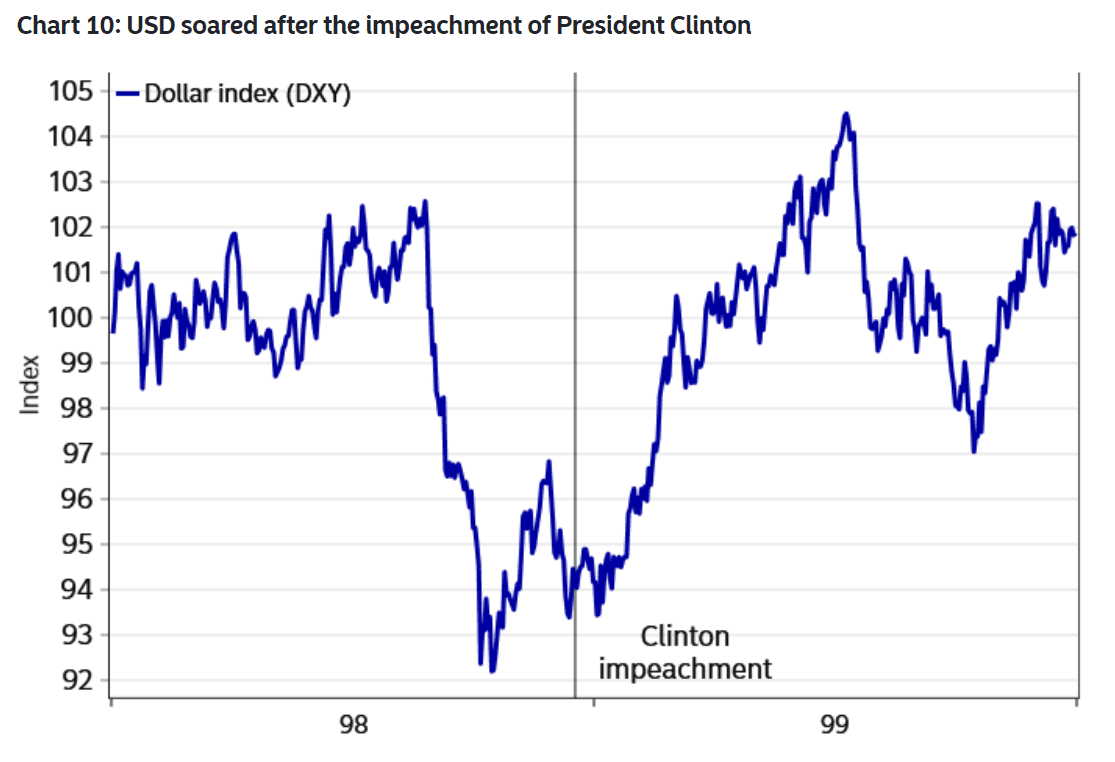