- Pound to be moved by Brexit developments; U.S. Dollar by employment data

The GBP/USD exchange rate is trading at 1.2160 at the start of the new week after falling by 1.00% in the week before and studies of the charts suggest that the pair has a neutral outlook and would need to break clearly above or below key confirmation levels to develop a more directional bias.

The 4 hour chart - used to determine the short-term outlook, which includes the coming week or next 5 days - shows how the pair was in an established uptrend but then started to decline after peaking at the August 27 highs and has since fallen quite steeply to its current level. 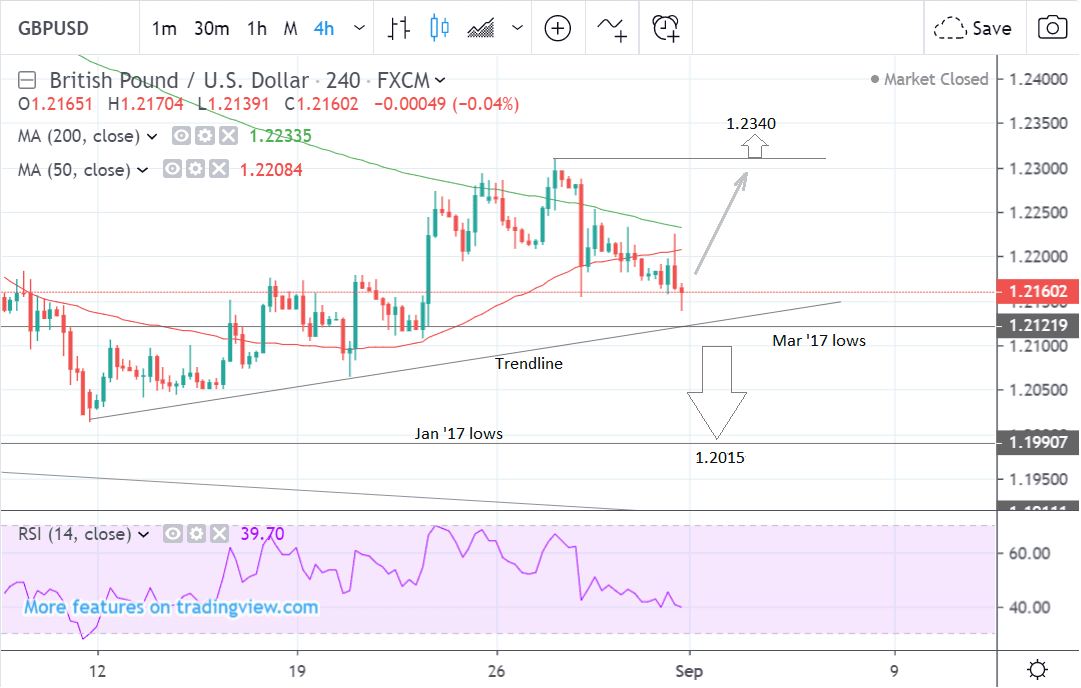 The direction of the short-term trend is now debatable. Although the rally from the August 11 lows began a new uptrend the recent decline which was combined with strong bearish momentum suggest the possibility the uptrend may have reversed and turned bearish.

As such we would require a break above the August 27 highs at 1.2310 to reaffirm more upside to a probable target at 1.2340, where it is likely to encounter tough resistance.

Alternatively, a break below the March ‘17 lows and 1.2100 would provide bearish confirmation for a move down to a target at the 1.2015 lows.

The daily chart shows how the pair was in a downtrend which corrected back up to above 1.2300 during August and has since started to weaken. 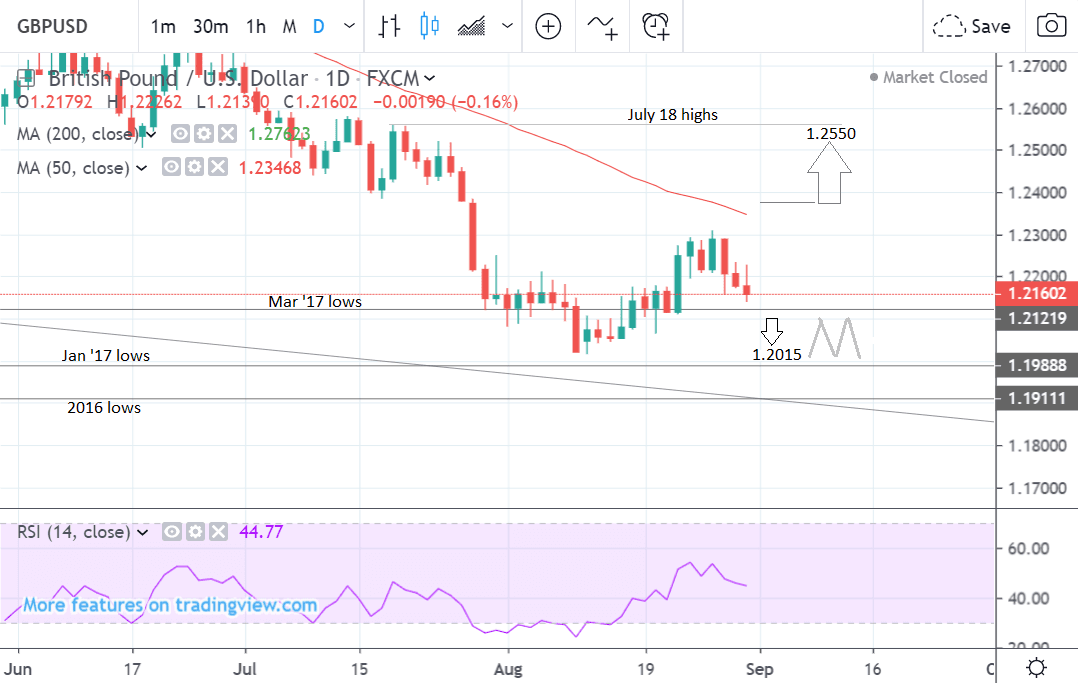 Over the last three days, the pair has started falling again and there is a possibility the bigger downtrend could be resuming and could take the exchange rate back down to a target at 1.2015, after which it is likely to bounce and may start going sideways for the rest of the forecast period.

Alternatively, the pair could also recover and continue going higher. For confirmation of this, however, we would ideally wish to see a break above the 50-day MA and 1.2375. Such a move would then probably indicate a continuation up to a target at 1.2550.

The weekly chart - used to give an idea of the longer-term outlook, which includes the next few months - also shows mixed signals. 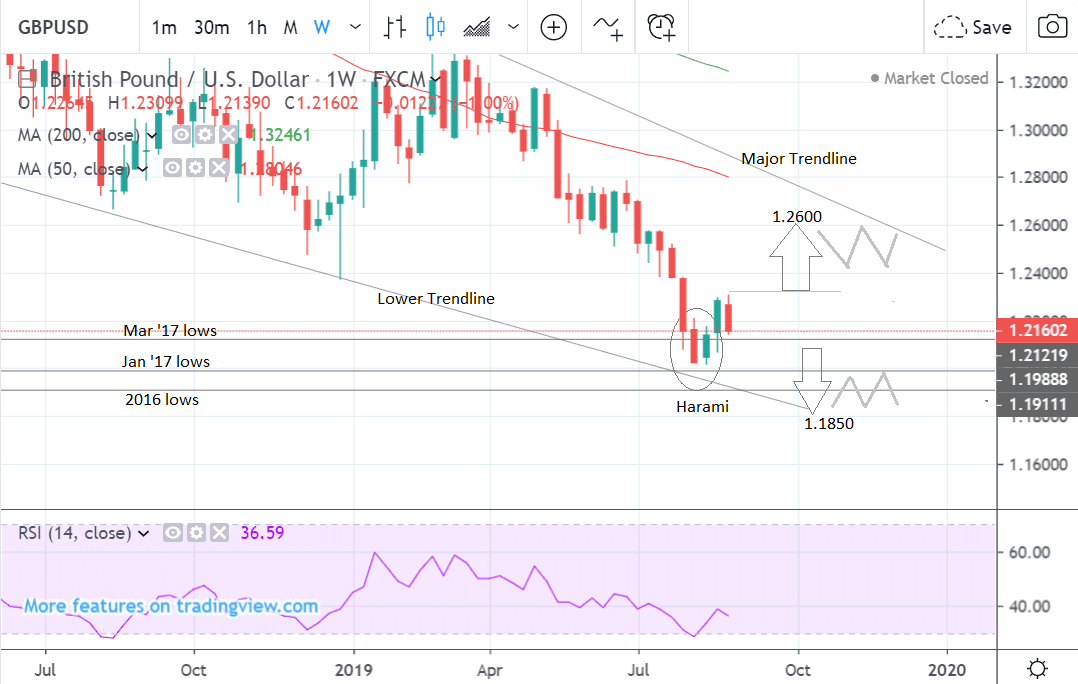 The pair formed a harami reversal Japanese candlestick pattern a few weeks ago (circled), followed by a bullish candle last week, which reinforced the original signal and suggested more upside on the horizon. This wasn't to be last week, however, which saw a 1.00% decline eventually.

Whilst it is still possible the pair could start going higher again despite last week’s losses there is also an increased risk it could recapitulate.

The RSI momentum indicator is looking constructive. It recently exited the oversold region giving a ‘buy’ signal and last week’s decline was marginal.

The possibility remains that the pair could rally up to a long-term target at 1.2600 and the underside of a falling trendline after which it will probably go sideways underneath the resistance for a time.

Alternatively, the pair could fall below the early August lows to a target at 1.1850 potentially, after which it may well also go sideways for a time.

The main releases for the U.S. Dollar in the week ahead are the U.S. labour report on Friday, the ISM manufacturing PMI on Tuesday and the trade balance on Wednesday.

The labour report includes non-farm payrolls, which are forecast to have risen by 159k in August, little changed from the 164k in July, and relatively strong. The unemployment rate is forecast to remain at a historically low level of 3.7%.

The report also includes average earnings, which are forecast to show a rise of 3.1% in August when the data is released at 13.30 BST on Friday. This would be marginally below July’s 3.2%.

Since labour market data is seen as the most sensitive to the state of the economy any dramatic swings higher or lower will impact on the U.S. Dollar. Higher payrolls or wages will strengthen the currency and vice versa if they are lower.

The ISM manufacturing PMI is expected to show a fall to 51.0 from 51.2 when it is released at 15.00 on Tuesday. The metric is seen as a key gauge of the country’s economic well-being so a higher-than-expected result would be likely to support the Dollar and the opposite if the result is lower.

The trade balance is the third major release and it is forecast to show a $-53.5bn deficit in July when the data is published at 13.30 on Wednesday. This would represent a narrowing of the trade deficit from the -55.2bn of June.

The trade data will be of interest to investors as it provides clues as to how the trade war is impacting on the U.S. Part of the rationale for raising tariffs on Chinese goods was to reduce the trade deficit, which has not happened.

This suggests the U.S. is highly unlikely to remove tariffs yet. Without a removal of tariffs it is unlikely the Chinese will agree to a trade deal and tensions are likely to continue between the two superpowers.

A deep trade deficit tends to put pressure on the currency both because it needs to fall to right the imbalance in trade and because it impacts negatively on economic growth.