- Pound to be impacted by Brexit politics, GDP data

- Dollar to be subjected to Fed speak

The Pound-to-Dollar exchange rate is trading at around 1.2530 at the start of the new week, 1.35% lower than where it started the previous week and close to the multi-month low set on Friday at 1.2481. Studies of the charts suggest the pair is in a downtrend which is expected to continue over the next five days.

The 4-hour chart - used to assess the trend over the short-term, which means the next 5 days - shows the pair falling in a downtrend since the end of June. According to the old trading adage that ‘the trend is your friend’ this downtrend is more likely to continue than reverse. 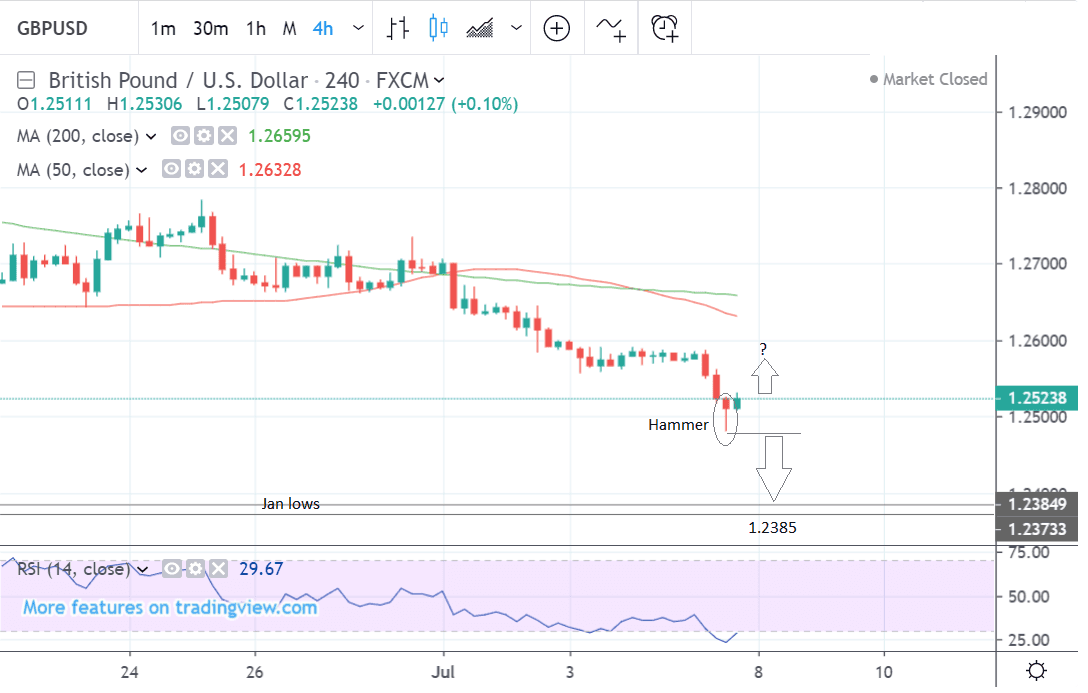 If the pair can break below the 1.2481 July 5 lows it will probably continue down to the next target at 1.2385 and the January lows.

Despite the overall bear trend, GBP/USD formed a bullish hammer candlestick at the July 5 lows and this was followed by a positive green candlestick. This is a bullish sign that the pair could turn around and start rising.

The RSI momentum indicator is in the oversold zone but if it rises and closes back above 30, as it looks to do, it would provide a buy signal for the pair, adding to the bullish evidence from the hammer candlestick.

The daily chart - used to provide an indication of the medium-term outlook which includes the next week-to-month ahead - is giving mixed signals: on the one hand, the pair is in a downtrend which is expected to continue, but on the other, price is converging bullishly with the RSI indicator which indicates the pair might rebound higher. 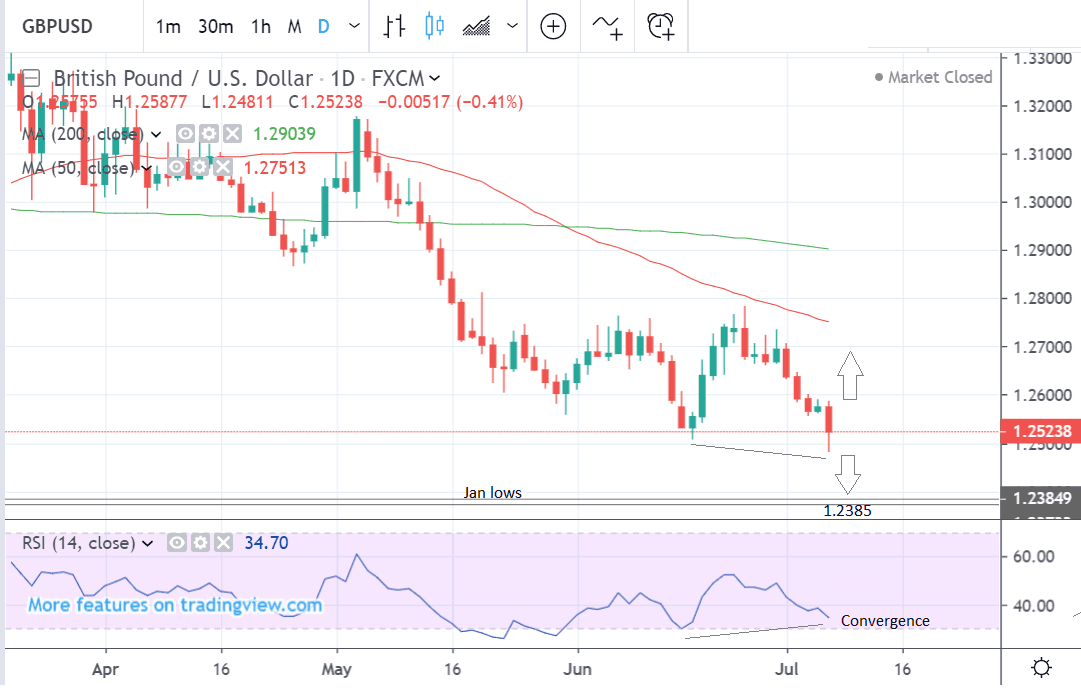 Convergence happens when price makes a new low but the RSI does not. The non-confirmation suggests waning downside momentum and an increased chance of recovery.

Set against the established downtrend this introduces a risk that the pair may rebound rather than continue lower. It is too early to say for sure whether this will lead to a happen - and the dominant downtrend remains intact for now - suggesting continued risks of a bearish extension lower to the target at 1.2385 and the key January lows.

The weekly chart is showing no clearly definable trend and indicates the pair could meander sideways between the Jan lows and the June highs indefinitely. 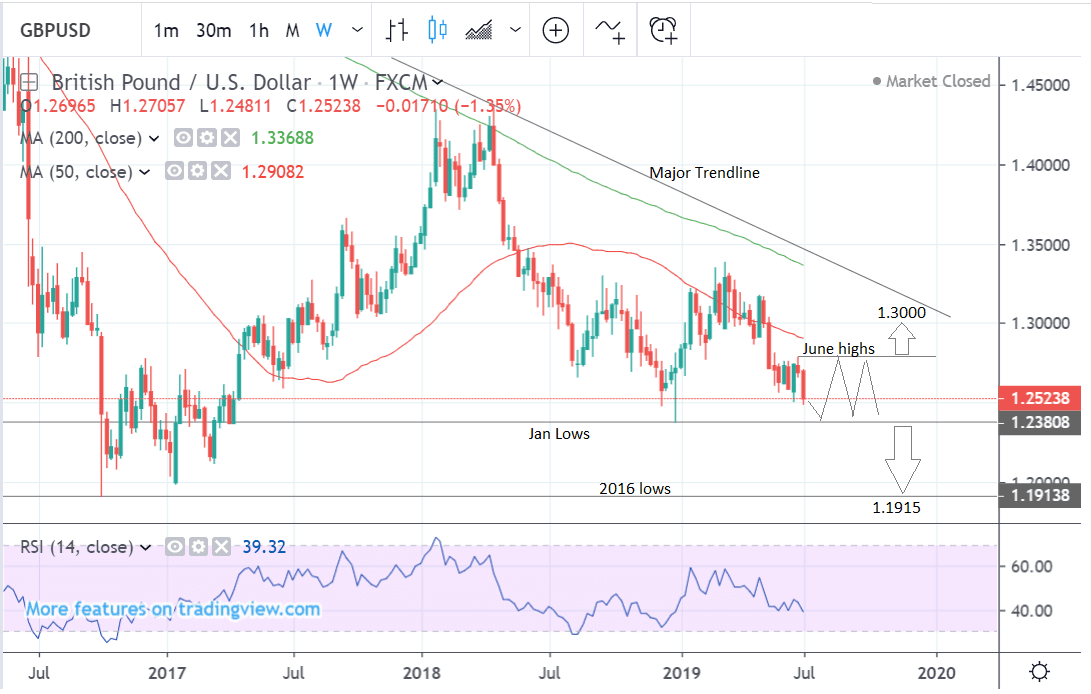 A break below the January lows, however, would confirm a probable bearish extension down to a target at 1.1915 and the key 2016 lows.

Alternatively, a break above the June highs at 1.2785 would reinvigorate bulls and probably lead to a move up to the key 1.3000 level close to a major long-term trendline.

"Prices have remained under pressure, helped by Friday’s broader USD strength. As such, we are re-testing the medium-term range lows. A recovery back through 1.2560-1.2610 resistance is needed to alleviate the immediate pressure and suggest further range trading," says Robin Wilkin, a cross-asset strategist with Lloyds Bank. "A decline and close below 1.2440 would be a new bearish dynamic and risk a deeper test of key longer-term support in the 1.22-1.20 region."

The main driver of the U.S. Dollar in the week ahead is likely to be speculation about future monetary policy triggered by commentary from Jerome Powell, the chairman of the Federal Reserve (Fed), when he delivers his semi-annual testimony to both Congress and Senate committees on Wednesday and Thursday respectively.

He is likely to reiterate the Fed’s more dovish June meeting message that it stands ready to lower interest rates should worsening economic conditions warrant it.

The shift in tone from the Fed has coincided with a spell of Dollar weakness, confirming hints of interest rate cuts over coming months tends to play negative for the currency.

After the strong rebound in June Non-Farm Payrolls, shown in Friday's data, he has reason to maintain a balanced message and there is a risk he may even have revised up his assessment, which would support the U.S. Dollar.

This is because the labour market is a key barometer of the health of the economy.

The minutes of the June Fed meeting are published on Wednesday and will provide further insight into Fed officials’ thinking on the trajectory of future monetary policy.

There may also be scrutiny of the details of monetary policy tools. The Fed is currently reducing the number of bonds on its balance sheet by allowing them to mature and not reinvesting the proceeds when they do. This is a form of de facto tightening which the Fed could soon decide to conclude.

“In regards to the meeting minutes, interest will be high for any additional details on the balance sheet that could suggest an earlier end to tapering or further discussions on the equilibrium size and composition,” says an economic preview note from Wells Fargo.

The other major release is inflation data in the form of CPI and factory gate prices or PPI out on Thursday and Friday at 13.30 BST respectively.

On a yearly basis CPI is expected to remain at 2.0%.

Inflation is important because it informs monetary policy which is a direct driver of currencies especially G10 currencies. Although traditionally viewed as something negative for the economy, higher inflation is often positive for currencies as it drives up interest rates, and higher interest rates are a magnet for international capital.

“While the CPI numbers are not anticipated to be of much significance to investors’ pricing of a rate reduction by the Fed at the end of this month, weaker-than-expected figures would only reinforce the view that the US central bank will ease policy and this would keep the US Dollar on the backfoot,” says Raffi Boyadijian, an economist at FX broker, XM.com.

The main driver of the Pound in the week ahead is likely to be political uncertainty.

It will probably trade with a downside bias as a result of rumours the next leader of the Conservative party - in all probability Boris Johnson - will face little choice but to call a snap General Election before 2019 is out if he is to have any chance of passing a negotiated Brexit deal through parliament.

Expectations for the Conservative's wafer-thin majority to be overturned in the event Johnson tries to lead the UK into a 'no deal' exit from the EU would leave the fresh Prime Minister with little choice but hope that the country will back him in another vote.

However, General Elections usually result in more political uncertainty and weaken the Pound, so the outlook is overall bearish from a fundamental point of view.

We will be watching for further developments on this front over coming days, while keeping an ear on Johnson's campaign for suggestions as to how he might deliver Brexit.

The main economic driver is GDP data for May, which is expected to show a rebound of 0.3% after a negative growth rate in April.

UK economic growth is a key driver of the Pound as it influences capital inflows and a worse-than-expected result could impact negatively on the already vulnerable Pound.

“The economy probably underperformed its European partners in the second quarter as the Brexit extension has only prolonged the period of uncertainty for British businesses. UK GDP shrank by 0.4% month-on-month in April and data due on Wednesday is forecast to show GDP recovering by 0.3% in May,” says Raffi Boyadijian, an economist at XM.com.

The other main data releases for Sterling are industrial and manufacturing production in May, which are likely to show positive recoveries as April’s stats were kept ‘artificially’ low due to one-off factors.

“Both industrial and manufacturing output also slumped in April as firms sought to run down the large stockpiles they built in the prior month. In May, they’re expected to have rebounded by 1.5% and 2.5% m/m, respectively.”

All the major data releases are scheduled for release on Wednesday, July 10 and 9.30 BST.