The Dollar stabilised overnight and into the Thursday session after the Federal Reserve (Fed) appeared to disappoint speculators who'd been betting the central bank would cut its interest rate before year-end.

However, the message on the domestic economy was decidedly upbeat, with the recent growth performance described as "solid", while making clear the reason for its newfound patience is mainly "global economic and financial developments".

"The Committee continues to view sustained expansion of economic activity, strong labor market conditions, and inflation near the Committee’s symmetric 2 percent objective as the most likely outcomes," the Fed says, of the U.S. economic situation.

The Dollar had softened into Wednesday's meeting due to caution among investors over the signal the Fed might send. Consensus has it that U.S. growth will slow sharply this year, ending the Fed rate hiking cycle, and until Wednesday some in the market had bet that it might cut rates before year-end.

However, the upbeat commentary on the domestic economy has led some economists to suggest the Dollar could gain more support over the coming days as the market unwinds its bet on rate cuts, which has been described as "inconsistent" with the Fed's view and narrative.

"This stance, combined with a modestly more upbeat assessment of the outlook, suggests rate cuts are not in the foreseeable future," says Michael Hanson, head of global macro strategy at TD Securities. "Powell's shot across the market's bow reaffirms that the USD remains the G10 carry king. As a result, it should find tactical support as fed fund expectations adjust to limited prospects of a cut. This may hit equities more than FX." 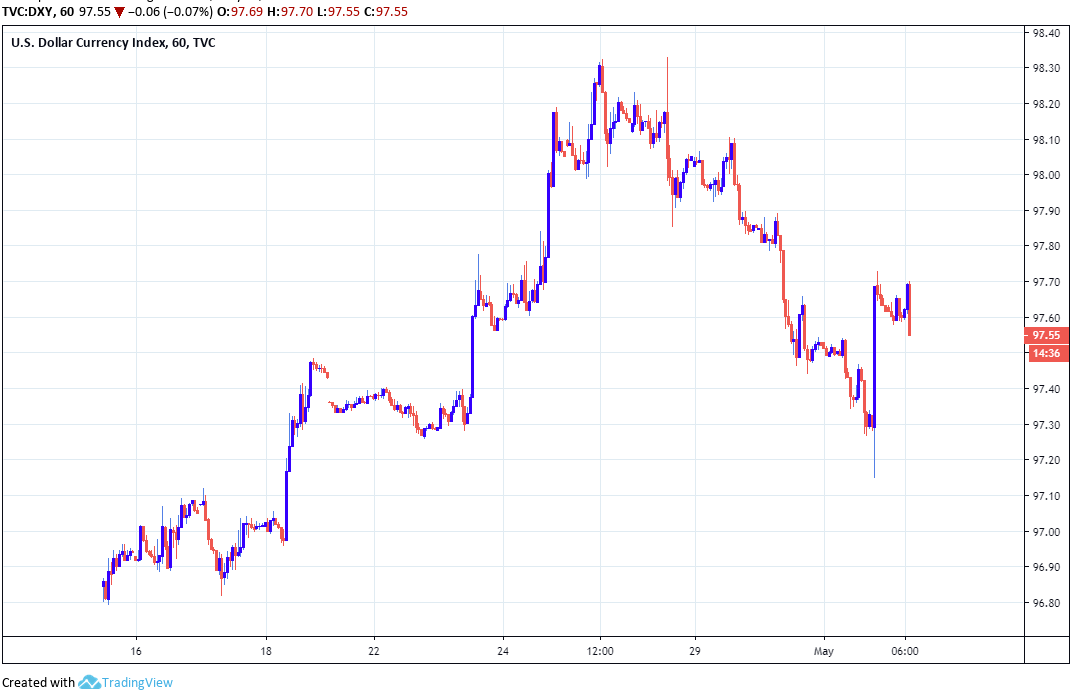 The Federal Reserve suggested strongly in March that it doesn't intend to raise U.S. interest rates in 2019 and this was confirmed by minutes of the meeting that were released in early April. It cited concerns over the impact that a global economic slowdown could eventually have on U.S. growth.

But markets took the decision as, at least in part, a sign of unease about the outlook for the U.S. economy. And given analysts were already looking for the economy to slow due to statistical 'base effects" sprung by the boost coming from 2018's cuts, it quickly became the genesis of speculation about rate cuts.

"Fed Chair Powell pushed back quite strongly in the press conference against the idea that the unexpected drop in core inflation in Q1 represents a shift in the trend. He argued that some, or even, all the downshift is due to "transient or idiosyncratic" factors," note Ian Shepherdson, chief U.S. economist at Pantheon Macroeconomics. "We agree with Chair Powell's assessment."

Shepherdson says that a recent dip in inflation, beneath the 2% target, is a temporary phenomenon but one that could last at least for the duration of 2019. If he's right it means the Fed has plenty of breathing room within which it can afford to be "patient" before raising rates again.

"Markets want the Fed to ease, but that makes sense only if you think core inflation is going to keep falling, which seems unlikely in the face of the gradual acceleration in wages," Shepherdson adds, in a note to clients. 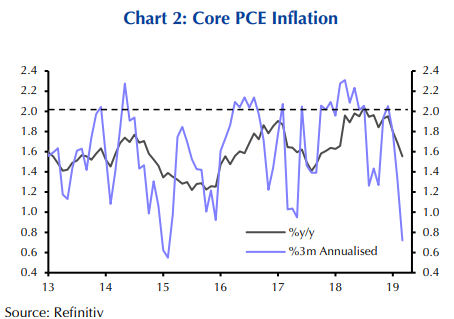 Interest rate decisions are normally taken in accordance with the outlook for inflation but impact currencies through the push and pull influence they exert over capital flows and the opportunities they present short-term speculators. Rising rates normally encourage capital inflows and a stronger currency.

Both TD Securities and Pantheon say Wednesday's statement from the Fed is inconsistent with a central bank that's likely to cut rates at any time soon, although some economists are sticking by their forecasts for it to begin cutting the Fed Funds rate this year.

"With first-quarter GDP growth above 3% annualised, the accompanying statement once again describes growth as “solid”. At the same time, however, the drop in core PCE inflation to only 1.6% in March forced it to admit that core inflation had “declined” and was now “running below” rather than “remains near” the 2% target," says Paul Ashworth, chief U.S. economist at Capital Economics. "The Fed repeated that it will be ‘patient’, but we still expect weaker GDP growth to force it to being cutting the fed funds rate before year-end."

"We are careful to note that today's meeting does not imply it is a range breaker for broad G10FX markets. Importantly," says TD's Hanson. "Today's decision may signal an end to the "race to the bottom". Indeed, central banks have been tripping over themselves to out-dove one another following Powell's dovish pivot in early January. As we allude to above, an accumulation of positive data surprises should help to loosen the USD's grip on FX. Patience is a virtue however, as this will take time.!

"We expect the USD to remain on the defensive in general over the balance of the week, barring a surprisingly “hawkish” shift by the FOMC later today, and the currency will have significant hurdles to cross in the form of this week’s remaining US data for a full reversal of USD weakness to occur," says Stephen Gallo, European head of FX strategy at BMO Capital Markets. 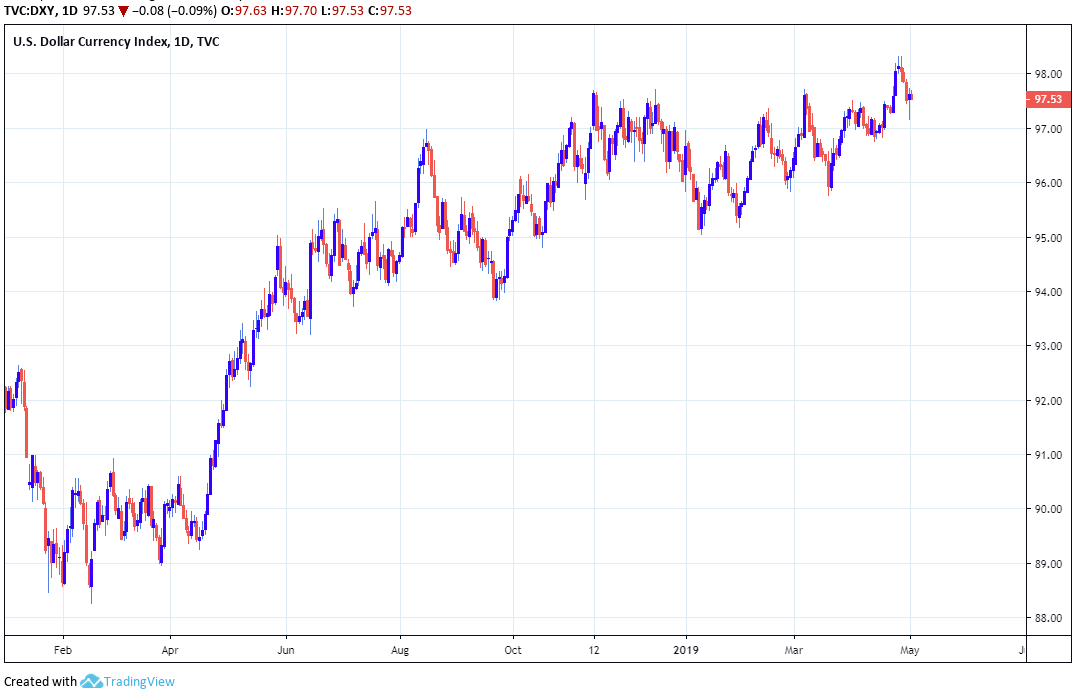 The Federal Reserve has raised U.S rates nine times since the end of 2015 in the name of keeping inflation pressures under control, during a period when many other G10 central banks have either sat on their hands or even cut interest rates.

The Bank of Canada and Bank of England are the only significant exceptions.

Four of those rate hikes came inside 2018 and helped the Dollar index convert what was once a -4% first-quarter loss into a 4% annual gain, albeit that the Dollar was helped along by a global economic slowdown that took hold in the second half of the year.

However, consensus has it that U.S. growth will slow sharply during the 2019 year and that economies in Europe and Asia will recover some lost momentum.

This is meant to send the Dollar into a tailspin by bringing the Federal Reserve rate hiking cycle to an end while encouraging speculation of rate hikes elsewhere, notably in the Eurozone.

The March FOMC projection materials show that most Federal-Open-Market-Committee members have given up anticipating two interest rate rises in 2019 and one in 2020. A majority of members now anticipate just one more interest rate rise in this cycle, which was penciled in for some time in 2020.

"Our medium-term contention remains that the USD has peaked and should begin a secular downtrend. However, robust US data, continued underwhelming data in Europe, and positive risk sentiment may keep USD modestly supported in the near-term. The increase in corporate issuance in low-yielding currencies, converted back into higher yielding currencies like USD, may continue to provide support to the USD. DXY broke the previous cycle high of 97.70," says Gek Teng Khoo, a strategist at Morgan Stanley.

In addition to holding rates unchanged, the Federal Reserve moved forward with its plan to the slow the pace at which it is reducing its bloated balance sheet, which swelled from around $800 bn before the financial crisis to more than $4.5 trillion by the time quantitative easing ended.

The Fed began creating new money to buy U.S. government bonds in response to the financial crisis, with the intention of forcing down bond yields alongside reductions in the Fed Funds rate in an effort to lift economic growth and inflation by encouraging more borrowing.

It was always likely to want to "normalise" the balance sheet over time but its effort to do so has proven problematic because the global financial system has now adjusted to having such an increased quantity of Dollars washing around inside of it.

Efforts to shrink the balance sheet led to a reduction of liquidity in the financial system, which is another way for saying a lesser number of Dollars, helping to force up the value of the greenback during 2018 and placing Dollar-dependent emerging market economies under pressure.

"there is the increasing possibility that the upward pressure on market rates could reflect a more general lack of liquidity, which could suggest the Fed has already gone too far in reducing reserve balances via its quantitative tightening," says Capital Economics' Ashworth.