- Watch for a potentially key Brexit deal vote on Thursday

The Pound-to-Dollar exchange rate is trading at 1.3032 at the start of a new week in which we expec the pair to be greatly affected by heightened Brexit uncertainty.

The granting of a lenthy Brexit delay - or alternatively, no delay at all - by the EU will determine where the Pound-to-Dollar exchange rate ends the week. Domestically, a breakthrough in talks between Labour and the Conservatives could spur a rally to fresh multi-month highs as this would suggest a Brexit deal can finally command the support of the House of Commons.

From a technical perspective, the pair has now broken below a key trendline which suggests a broadly bearish wash to the outlook. 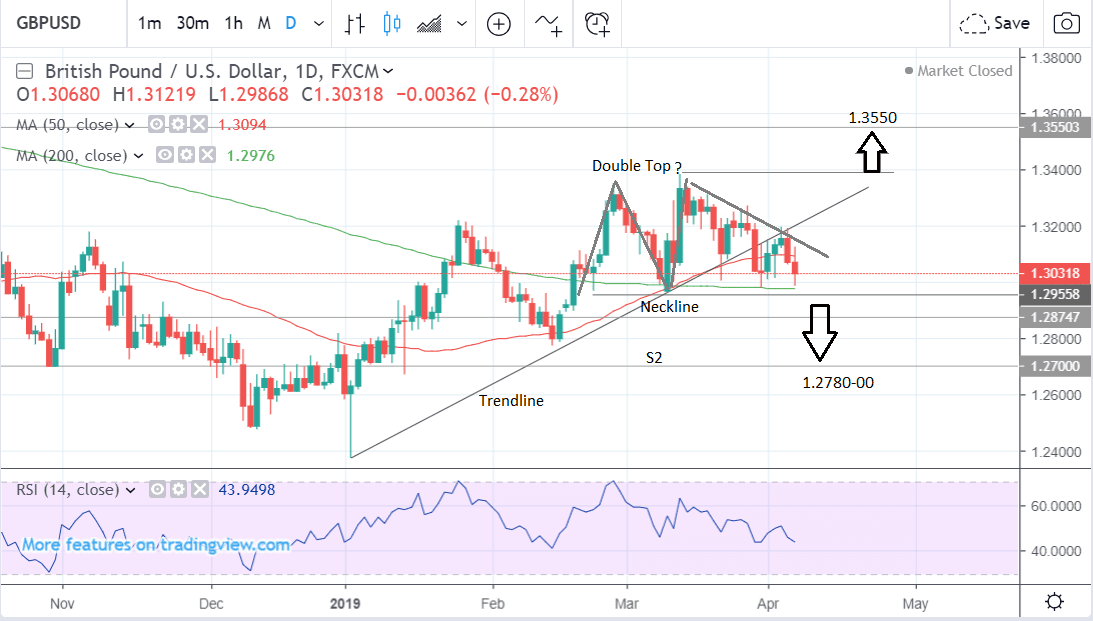 Yet at the same time the lack of downside penetration cautions against an overly bearish stance and we are neutral overall, until a stronger move either way supplies confirmation.

The pair has formed a possible double top or other complex topping pattern at the highs but it remains above the neckline for the pattern, and until this is breached the pattern lacks confirmation, and the risk of a resurgence remains.

If there was a break below the neckline at the 1.2950, however, it would signal a deeper bearish breakdown to a potential downside target at 1.2780 and the February lows, or even 1.2700 at the level of the S2 monthly pivot.

Momentum, as measured by the RSI indicator, is bearishly inclined as it continues to fall even though the market hasn't followed suit.

The 200-day moving average (MA), sitting at 1.2975, just above the neckline, remains a tough obstacle to further losses too. Large MAs often provide strong levels of support. A break below 1.2950 - or perhaps even more safely 1.2925, could, however, confirm the 200 as broken. A break on a closing basis would also provide bearish confirmation.

At the same time, we cannot discount the possibility that the double top fails and the uptrend resumes, pushing the exchange rate substantially higher.

A break back above the March 13 highs would probably provide the necessary confirmation for an extension up to a target at 1.3550, which is a strong resistance level made up of a combination of both the 200-week MA and the R2 monthly pivot, a level used by traders to assess the strength of the trend, and a strong support and resistance level in itself. 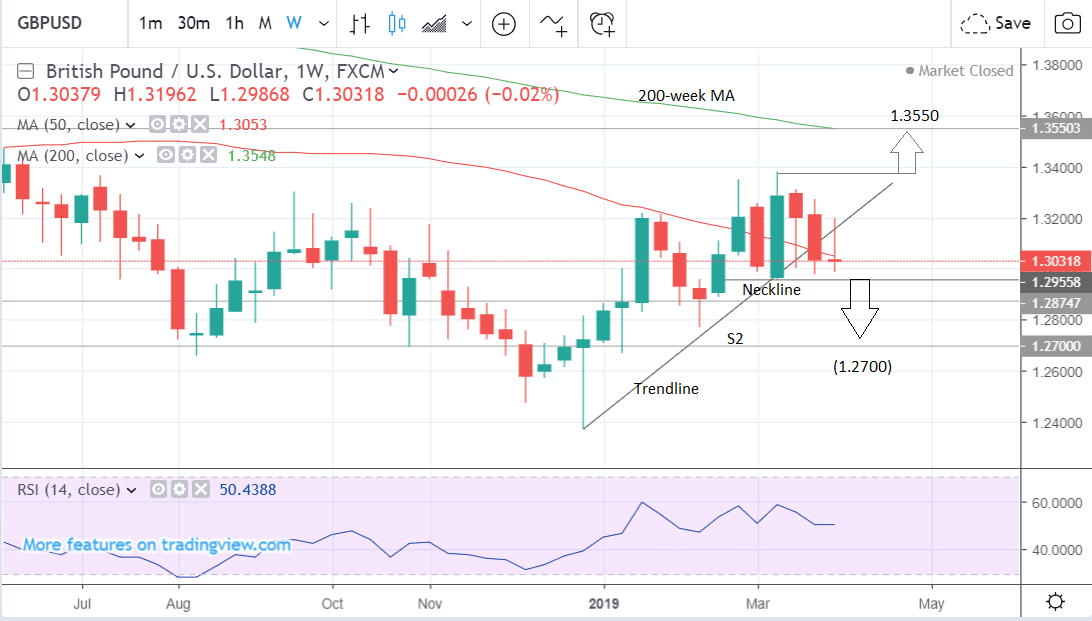 The Pound was supported ahead of the weekend on reports European Council President Donald Tusk will this week propose to European leaders they offer the UK a 12-month "flexible" Brexit delay.

However, on Friday Prime Minister Theresa May formally requested a delay to June 30.

If the European Council meeting on Wednesday does grant either of the two requests we expect Sterling to be supported as it ensures the UK will avoid a 'no deal' Brexit on Friday.

There are however reports France, Belgium and Spain see too much danger to the EU's integrity in offering a long extension, and the three countries are reportedly keen to only offer a short, two week extension that would allow both sides to prepare for a 'no deal'.

When we read this report on Friday night we immediately Tweeted a message to our readers that this is a significantly negative development that means the chance of a 'no deal' Brexit is substantial.

Remember, all 27 EU states have to sign off on whatever deal is offered to the UK and such opposition by core EU members cannot be ignored.

Germany is however reportedly open to Tusk's offer of a flexible extension as they are said to be keen to avoid a 'no deal' at all costs.

We feel that if France, Belgium and Spain win out, the UK parliament will face a crunch vote on Thursday that provides MPs a final chance to approve a deal.

The opportunity for parliament to vote for a delay to Brexit will have been entirely removed by the EU.

Much will of course depend on whether Labour and the Conservatives strike a deal that both parties can support in the House of Commons, if they do and a deal is voted through then we would expect a sharp rally in Sterling.

However, we note entrenched opposition within both the Labour and Conservative parliamentary parties against the two sides working for a deal, so even if a plan is agreed there is no guarantee it would be passed by a rebellious parliament.

On the 'hard data' front, the monthly GDP figure for February is the most important release. Currently no rise - or 0.0% - is forecast, which would mean a significant slowdown from the previous month’s 0.7%.

A slowdown in GDP would likely lead to downwards pressure for the Pound since it would make the UK less attractive to outside investors as a destination to put their capital to work.

GDP is out at 9.30 BST on Wednesday. The year-on-year figure is expected to come out at a higher 1.6%, revealing a better longer-term trend. The 3-month change figure is forecast to show a 0.2% rise, the same as previously.

The other key release is industrial production, out at the same time, and expected to show a -0.1% drop in February, versus the 0.6% rise in the previous month. This is an important contributor to GDP, so the release is also significant for the Pound for the same reasons.

The trade balance is also out at the same time. It showed a -£13.1bn deficit in the previous month of February and this is expected to fall marginally to -£12.8bn in February. Currencies often react to big changes in the trade balance as the market adjusts to a new equilibrium so a better-than-expected recovery might help Sterling and vice-versa for a fall.

Other data releases out at the same time are manufacturing production and construction output which is forecast to show a 0.8% rise, both in February.

Probably the most important release for the U.S. Dollar is the first estimate of inflation data in March, which is released at 13.30 BST on Wednesday, April 10.

Inflation affects the level at which central banks set base interest rates and this in turn impacts on the currency by affecting capital flows.

The market currently expects the Federal Reserve (Fed) to cut interest rates in the future and this is keeping downward pressure on the Dollar, however, if inflation rises strongly it could change these expectations and lead to a U.S. Dollar recovery.

Linked to this is another important release in the week ahead, the FOMC minutes.

These are the minutes from the Fed’s previous meeting and reveal the deliberation of the Fed’s policy team, whilst they are discussing what to do with interest rates. It can sometimes shed light on current Fed thinking and the future trajectory of interest rates so it tends to be an important release for the FX and rates market.

We believe the Fed has reason to strike a more optimistic tone on the outlook than has been the case in recent policy decisions, largely owing to the pick-up in economic data we have seen over recent days.

Friday's employment market numbers were encouraging in that they revealed a sharp pick up in employment when compared to the disappointing February data.

In short, the U.S. economy continues to hum along nicely and concerns of an impending recession appear premature.

Concerns the Fed's next move on interest rates would be a cut look misplaced, and should the market start pricing in further interest rate rises we could well see the Dollar push higher.

Another key release is factory orders out at 15.00 on Monday. It is currently forecast to show a -0.6% drop in orders in February, compared to the 0.1% in January.