The GBP/NZD exchange rate finds itself stuck in sideways range as the once dominant Pound takes a breather from its longer-term recovery.

The Pound remains in a long-term uptrend against the New Zealand Dollar, a move which began at the start of 2017 and despite correcting back since the November highs, the uptrend remains intact and will probably continue rising.

Nevertheless, the current short-term trend since the start of 2018 is sideways and appears to have no directional preference, and we hesitate to forecast further upside without more bullish evidence. 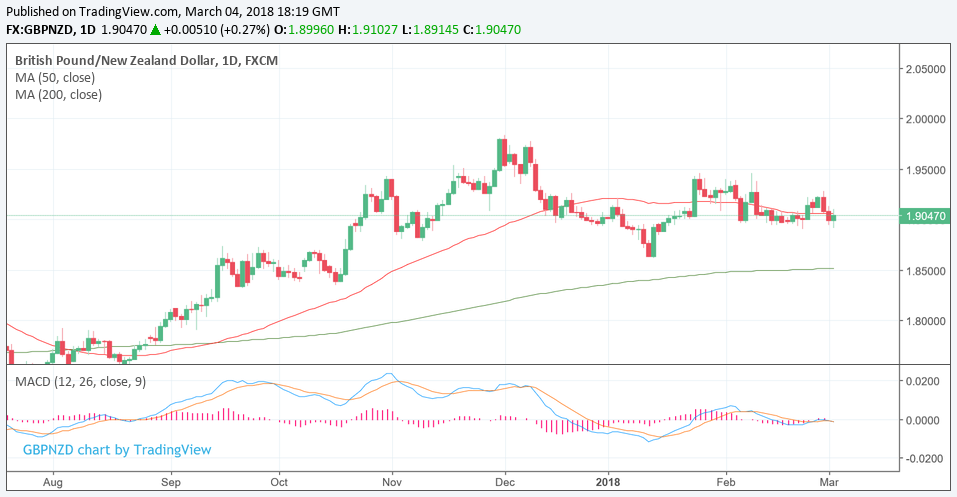 The location of the 50-month moving average (MA) at the 1.9835 December highs (see below) is a further deterrent to expecting more gains as it is likely to present a major obstacle to further upside.

Major moving averages tend to act as obstacles to the dominant trend and the exchange rate often stalls, pulls-back or reverseas trend when it touches them. This characteristic means MA's also attract short-term technical traders wanting to capitalize on the pull-back which actually further enhances the effect.

We, therefore, reserve judgment for now and wait for further confirmation from price action itself before making a definitive forecast. 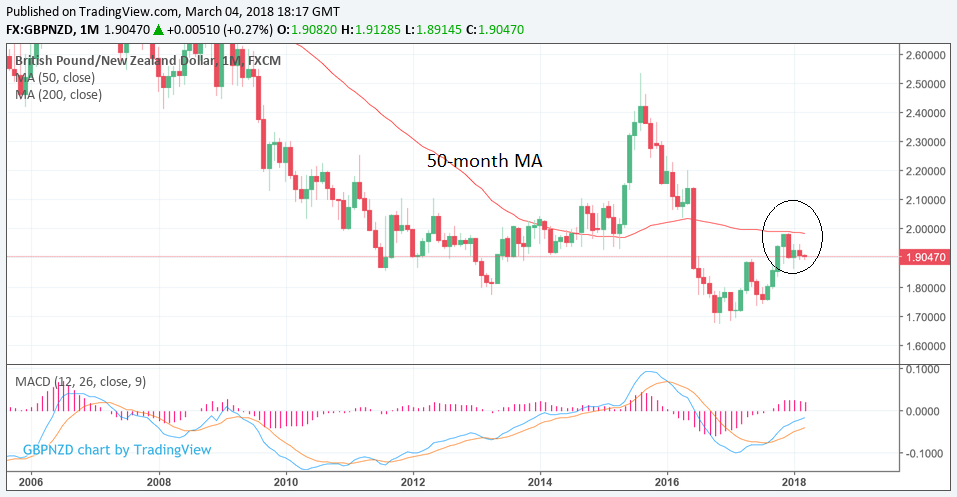 The main release of the New Zealand Dollar (kiwi) in the week ahead is dairy prices which are fixed at the global dairy trade auction on Tuesday, March 6.

The auctions are held every two weeks and the last one showed a -0.5% fall in prices which have generally been in decline over the last six months.

A further negative print on Tuesday may weigh on the Kiwi as dairy products account for the country's largest export type, so changes in their price influence the demand for Kiwi 's and its value.

The other main release for the Kiwi next week is Electronic Card Retail Sales which is expected to show a 0.1% rise in February when it is released at 21.45 on Thursday.

The Pound was largely unmoved at the end of last week as Prime Minister May delivered her 'road to Brexit' speech which offered little fresh information to investors.

The response from Europe has been mixed and there remains a question mark over whether the EU will sanction a transitional deal at its summit on March 23. A failure would sanction a transitional period would be negative for the Pound, but markets appear to be willing to keep Sterling and the Euro stuck in the already mentioned tight range until they get a clear steer on how talks are progressing.

In the week ahead there are reports the Chancellor Philip Hammond will also be making a Brexit speech, focusing on the subject to a bespoke deal for the UK's dominant services sector. The UK has a services sector trade surplus with Europe so this could be important for the Pound, however, whether Hammond's proposals are likely to be accepted by Brussels is a different matter.

Staying on the topic of the services sector, the data highlight of the week comes in the form of IHS Markit's services PMI for February which will give a steer as to how well the sector performed.

Markets are looking for a reading of 53.3, which would be a shade up on January's 53.0. A beat on this estimate could give Sterling a nudge higher. A miss, the opposite effect.

However, with the Brexit being the key driver of Sterling at present we would expect a large deviation from expectations in the data to move the currency; particularly against the Euro.

Watch Friday's trade balance data for January, which is forecast to show the deficit narrowing to -12.2bn from -13.6bn previously, when it is released at 09.30 GMT.

Industrial production is out at the same time and is forecast to show a 1.1% rise month-on-month in January.

Manufacturing production, also out at 09.30 on Friday, is forecast to rise by 0.2% in January compared to the previous month.