Foreign exchange analysts at Barclays say they expect the New Zealand Dollar to make small advances in the second half of 2021, but a more notable acceleration is likely to be seen in 2022.

The forecast is built on expectations that the New Zealand economy will remain robust while the country's vaccination programme will allow for a full reopening of the tourist industry in 2022.

"We expect NZDUSD to gain marginally in H2 2021 before accelerating in 2022, supported by the improving macro outlook and rising risks of an earlier start to policy normalisation by the RBNZ," says Ashish Agrawal, an analyst with Barclays. 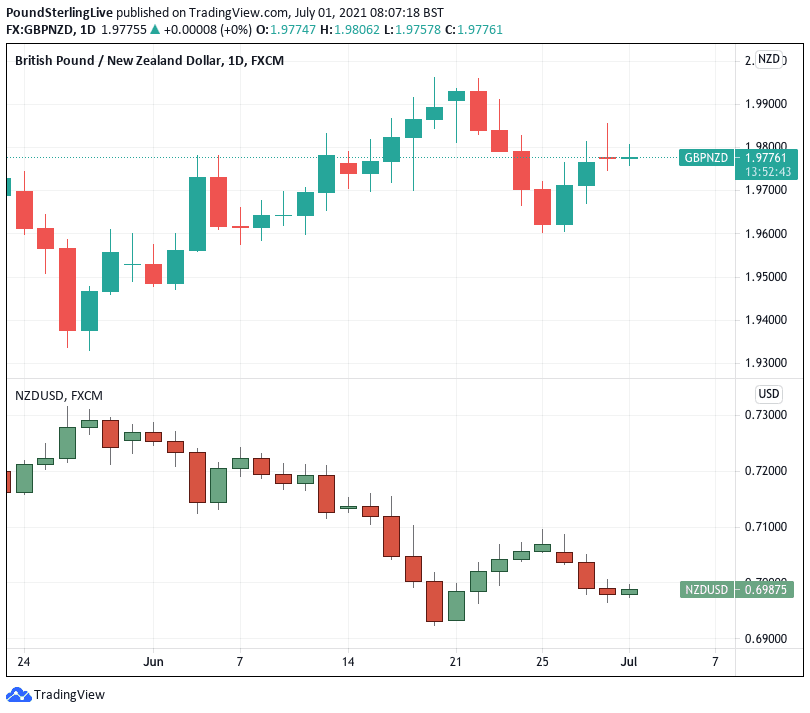 Above: Action in GBP/NZD (top pane), is proving to be a mirror of NZD/USD moves (lower pane).

A key driver of New Zealand Dollar performance will however inevitably be tied up with the Federal Reserve and whether or not expectations grow for higher interest rates in the U.S., according to Barclays in a recent currency research briefing.

Such a move by the Fed could represent a handbrake on global growth if it raises the cost of global finance while raising the attractiveness of the U.S. Dollar.

(A good example of this dynamic is displayed in the 2021-2022 forecasts set out below as well as the first graph).

"Higher US real rates amid the Fed’s hawkish turn will likely cap NZD gains in the short-term," says Agrawal. A theme in foreign exchange markets over the course of June has been the shift in policy expectations at the Federal Reserve: heading into June the market expected a first rate rise to be delivered by the Fed in 2024, but following the June Fed policy update that timing has come forward to 2023.

This shift is a 'hawkish' one and helped support U.S. bond yields which in turn pulled the U.S. Dollar higher.

A similar expectation dynamic has however been underway concerning the New Zealand Dollar and the Reserve Bank of New Zealand (RBNZ).

It was only in 2020 that the market was wary that the RBNZ might cut interest rates into negative territory in order to support the domestic economy in the face of the covid-19 pandemic.

But given a better-than-expected economic performance expectations have shifted to such a degree that the market expects the RBNZ to be one of the first major central banks to raise rates, with a hike in the early part of 2022 expected by some analysts.

Barclays tell clients New Zealand economic growth has been surprising positively and the RBNZ expects the output gap to turn positive in in the first half of 2022.

A closed output gap simply means growth is above the trend rate and is inflationary, it is at this point that central banks tend to feel an interest rate rise is warranted.

The rule of thumb in foreign exchange is that when markets anticipate a central bank is approaching an interest rate rise the currency it issues appreciates in value.

But for the RBNZ and the NZ Dollar much will depend on the shape of the pandemic in New Zealand, and here downside risks exist.

"Tourism could start recovering later this year and accelerate in 2022, given the rapid vaccination progress, which could help to reduce the current account deficit," he adds.

Agrawal cites "rapid vaccination" progress, however a look at the data suggests New Zealand remains a laggard in vaccinating its population with only 14.62% of the population having received a first dose of the vaccine. 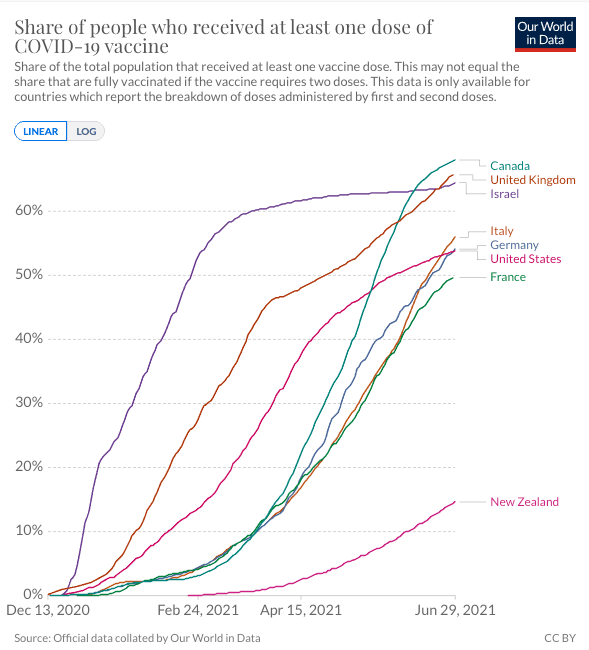 Given some estimates of 'herd immunity' against the Delta variant of Covid-19 reside in the 80+ range there is a significant way to go before New Zealand's politicians can abandon the zero-covid policy and allow tourists to arrive unfettered.

Agrawal does however recognise that the pandemic remains a risk to the outlook: "delayed border reopening and commodity weakness could further weaken the NZD."

Indeed, with Australia announcing new harsh lockdowns in the face of Delta variant infections, nerves will be rising in New Zealand that a similar tough winter awaits.

Regadrless, "we expect the NZD to outperform the AUD over our forecast horizon, based on relative monetary policy outlooks," says Agrawal.

Analysis by Barclays suggest NZ Dollar valuations are unsupportive but they say valuations are less likely to be an issue given improving terms of trade and reduced uncertainty.