The New Zealand Dollar was at the sharp end of a rallying U.S. Dollar on Friday when it suffered the steepest loss of all major currencies amid a further surge in bond yields that gave investors food for thought ahead of the weekend.

New Zealand's Dollar was down against all majors including Pound Sterling as the Dollar rose in price action that appeared to reflect a mixture of profit-taking on wagers against the U.S. unit and a possible fresh bid for government bonds.

New Zealand's Dollar was previously vying with the Australian Dollar, Pound Sterling and Norweigian Krone for first place in the major currency league table this week, but each was among the bloodiest casualties in Friday's Dollar rally.

This saw the Pound-to-New Zealand Dollar rate a small fraction higher for the session, making Sterling the second worst performing major ahead of the weekend, while the Canadian Dollar remained the week's top performer. 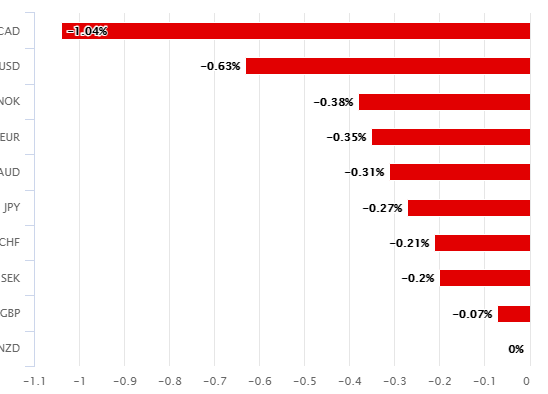 The Loonie was the only major currency to rise against the U.S. Dollar on Friday amid price action that otherwise indicates profit-taking on reflation trade wagers that had favoured so-called risk currencies at the expense of a U.S. Dollar whose investment case may be improving.

"The mini-rally in the USD shows the familiar driver of the equity market/bond yield interplay remains the key determinant of the USD," says Daragh Maher, U.S. head of FX strategy at HSBC. "US yields are higher, perhaps buoyed by growth expectations, with Treasury Secretary Janet Yellen noting that stimulus checks should start arriving this weekend. President Joe Biden’s attainable aspiration that all US adults should be eligible for vaccines by 1 May was a reminder of the strong progress in the vaccine rollout."

The New Zealand Dollar had previously been an outperformer, with Fonterra raising its 2020/21 for forecast for the Farmgate Milk Price range by 40 cents to $7.30-$7.90 per kg of Milk, which would be its highest payout since 2014.

Consistent strong demand, particularly from China, has driven the price of milk to multi-year highs, NZ's Treasury said in its weekly economic update. Meanwhile, Prime Minister Jacinda Ardern lifted coronavirus-related restrictions in Auckland, although none of this did anything for the Kiwi on Friday. 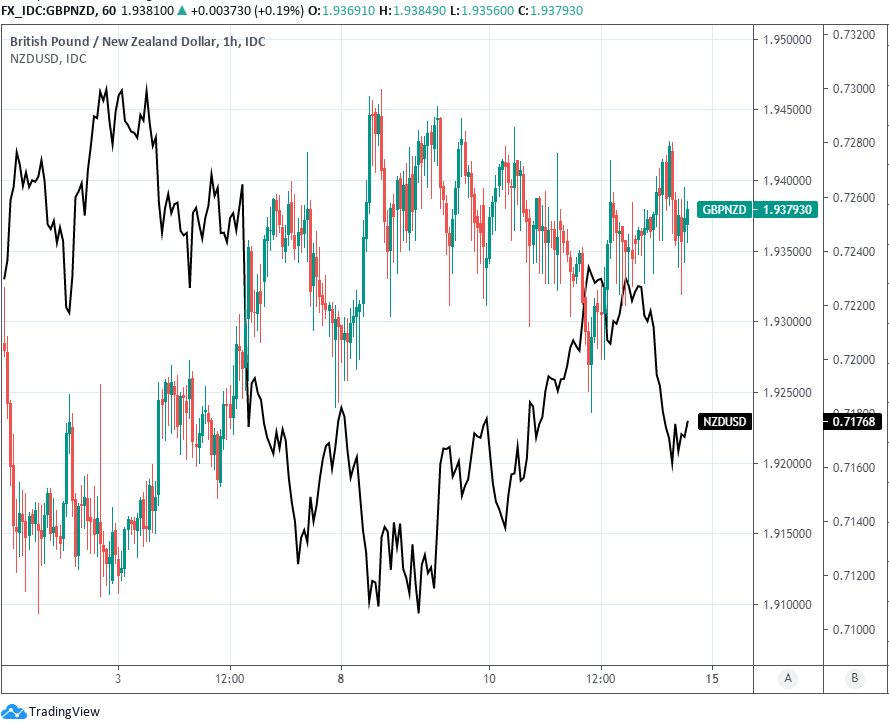 Above: Pound-to-New-Zealand Dollar rate shown at hourly intervals alongside NZD/USD.

"Yield looks set to continue being the driver of G10 FX performance as is evident in this week’s performance. The UST 10-year yield has popped higher again today and looks set to break new ground above the 1.60% level. We feel Powell will have a tough job next week in convincing the markets of the Fed’s ultra-dovish stance being maintained in the face of compellingly strong macro data," says Derek Halpenny, head of research, global markets EMEA and international securities at MUFG.

Friday's New Zealand Dollar losses and U.S. Dollar gains came alongside another rise in U.S. government bond yields that has at times had an apparent effect on some markets, especially those for risk assets like stocks, commodities and correlated currencies. Yields may in turn be giving food for thought to those who cashed out of the Kiwi.

President Joe Biden signed Washington's latest stimulus package and pledged to ramp up what is already one of the world's most effective coronavirus vaccination programmes on Thursday while a 30-year bond auction saw demand that was around the middle of a multi-year road but gave rise to the highest yields since February 2020.

"I continue to prefer CAD to AUD and NZD on oil and proximity to US growth," says a London-based FX trader at J.P. Morgan. "We failed where we should have (1.40 in cable, 1.20 EURUSD etc), USTs are getting crushed (30yr auction was on the screws so one would be forgiven for thinking fixed income could have a period ofstability) and USDCNH is now trying to break back above 6.50. We are looking for the USD to trade a little better today." 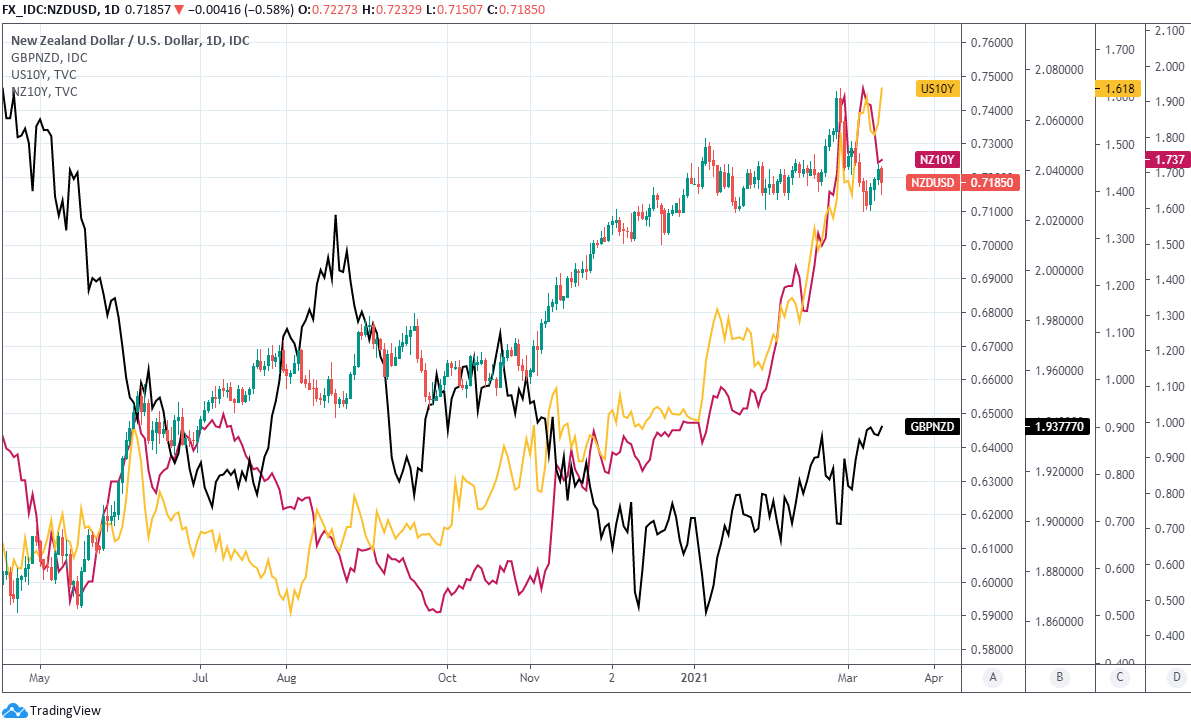 It's not clear how sustainable yields are as a driver of U.S. Dollar strength in the short-term, in part because the Federal Reserve (Fed) insists it won't lift interest rates until it has seen above-target inflation materialise and is confident that its 2% average target is attainable over the expanse of time.

"The underlying message will be that the Fed is in no rush. That should keep the medium term DXY bear trend on track though the pace likely prove more glacial than in 2020, owing to the US’s more compelling growth credentials," says Imre Speizer, head of NZ strategy at Westpac. "Medium-term, we remain bullish and target 0.7550 by May, a key driver expected to be a continuation of the global recovery which should see commodity currencies outperform."

The Fed announces its latest interest rate decision next Wednesday at 19:00 London time and many analysts expect it to push back against suggestions that rising yields or investors' own inflation expectations could spook it into tapering the U.S. quantitative easing programme or announcing early interest rate rises.

U.S. bond yields may as a result no longer appear quite as enticing to investors as they seemingly did on Friday. This would be positive for a New Zealand Dollar that's still expected by many analysts to rise in the weeks and months ahead, albeit at a potentially glacial pace.

"Looking ahead, the battle lines are likely to be drawn around economic performance and vaccine rollouts, and on that score, the US is well advanced, and so is the UK and parts of Europe. Bond yields have stabilised for now but likely have further to go; with NZ having led the charge higher, the risk is others catch up, potentially weighing on the NZD," says David Croy, a strategist at ANZ, writing in a Thursday note to clients.