Despite the advance, momentum studies suggest the near- and medium-term outlooks favour further downside and that any moves higher are to be considered corrections within a more established downtrend.

Indicating the bias remains lower is the observation that the current exchange rate is below both the 20-day and 50-day moving averages. 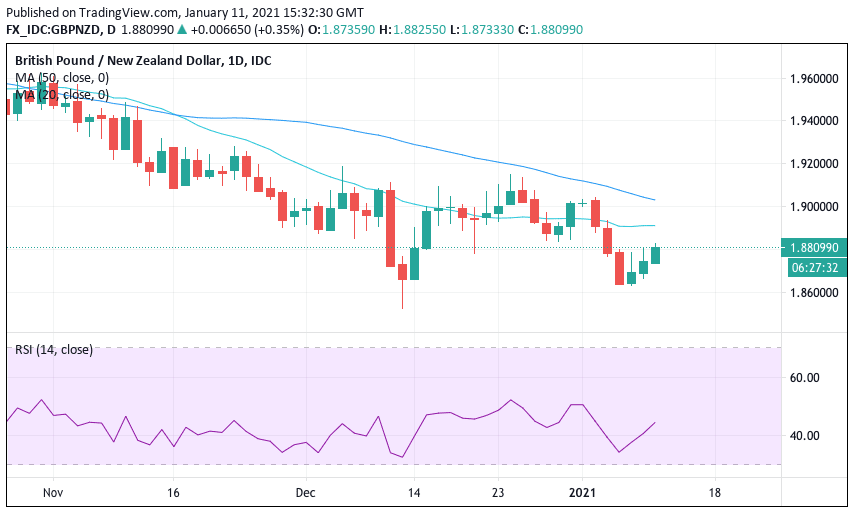 If the recovery can take GBP/NZD back above the 20-day MA we will be inclined to take a more neutral stance of the exchange rate, and if a break above the 50-day occurs Sterling can be considered to have overturned the downtrend and be back in recovery mode.

Adding to the view that momentum is negative is the Relative Strength Index (RSI) - which is considered a reliable measure of momentum. The current reading of 45.08 puts the RSI in negative territory and advocates for further declines.

The fundamental picture also ultimately remains supportive of the New Zealand Dollar, but only if the positive investor sentiment of recent weeks and months remains intact.

The New Zealand Dollar has been a beneficiary of what is termed the 'reflation trade' - this involves the buying of stocks and commodities by investors in anticipation of a more entrenched economic recovery in 2021.

The New Zealand Dollar has a strong positive correlation with stock markets and commodity prices, rising when they do and falling when investors are disposing of these 'risk on' assets.

"Risk-related reflation trades – equities and commodities – can continue to push higher as markets continue to price in further potential for stimulus after the U.S. Georgia Senate election surprise and positioning is not yet crowded," says Kurran Tailor, an analyst at Citi.

The setback in New Zealand Dollar exchange rates at the start of the new week comes in sympathy with a decline in global equity markets and commodities, with investors taking a step back in light of potential political uncertainties in the U.S. and news of clusters of covid-19 infections in China.

China is New Zealand's main export market, and any slowdown in the Chinese economy owing to covid-related lockdowns could trigger a more notable retracement in the NZ Dollar.

Authorities in China's Hebei province last week reintroduced stricter conditions on the movement of people in the province, and investors will be watching to see how the outbreak progresses.

A more severe lockdown in China could well knock some wind out of the rally in commodities in particular, which would in turn likely contribute to a weaker Kiwi Dollar.

Hebei accounted for 82 of the 85 new local infections reported on Jan. 10, the National Health Commission said in a statement, with Liaoning Province also reporting two new cases and Beijing reporting one new case.

Cases remain low, but a risk is that an acceleration of the outbreak in Hebei or elsewhere could prompt a more meaningful lockdown, which in turn negatively impacts economic growth and broader investor sentiment.

The decline in the New Zealand Dollar also comes amidst observations that the currency is now potentially overvalued following a strong multi-month recovery and that some corrective price action was becoming increasingly likely.

"The New Zealand dollar continues to show some asymmetrically high net longs compared to its closest peers, and with a positioning of +26% of open interest it is now the most overbought currency in the G10 space. This situation still appears to be a consequence of the fierce repricing of negative rates in New Zealand after the central bank shifted to a less dovish tone," says Pesole.

The Reserve Bank of New Zealand (RBNZ) signalled in the first half of 2020 that it was intent on cutting interest rates to support the economy, to the extent that the Official Cash Rate (OCR) could actually go negative.

Expectations for negative interest rates prompted a devaluation in the New Zealand Dollar as investors pulled money out of New Zealand money markets, opting to look for better returns elsewhere.

However this trend was halted and then ultimately reversed when the RBNZ rowed back from its threat to cut interest rates into negative territory in the face of better-than-expected economic data.

With the New Zealand economy well positioned for a more sustained recovery in 2021 the RBNZ is unlikely to threaten negative interest rates again which should ultimately underpin the currency.

The big question is to what extent have expectations for negative interest rates been erased from NZ Dollar valuations? If this expectations has been completely removed the New Zealand Dollar might find its appreciation potential fade.

Meanwhile, the Pound enters the new year with very little positivity attached to it and there is a risk that fast improvements in the UK economy drives a recovery in the currency.

With the UK's vaccination programme building up a head of steam the UK could be well placed to start reducing restrictions in March, and this time the around the moves could be permanent.

If the UK is free of covid-19 lockdowns and other economies are running below full potential - which is likely the case with New Zealand given the country's slower vaccination schedule - the Pound could find itself in appreciation mode.

New Zealand expects to start rolling out vaccines in the second quarter of 2021, which is when the UK expects to have fully vaccinated its most vulnerable citizens and will be moving into less susceptible age groups.