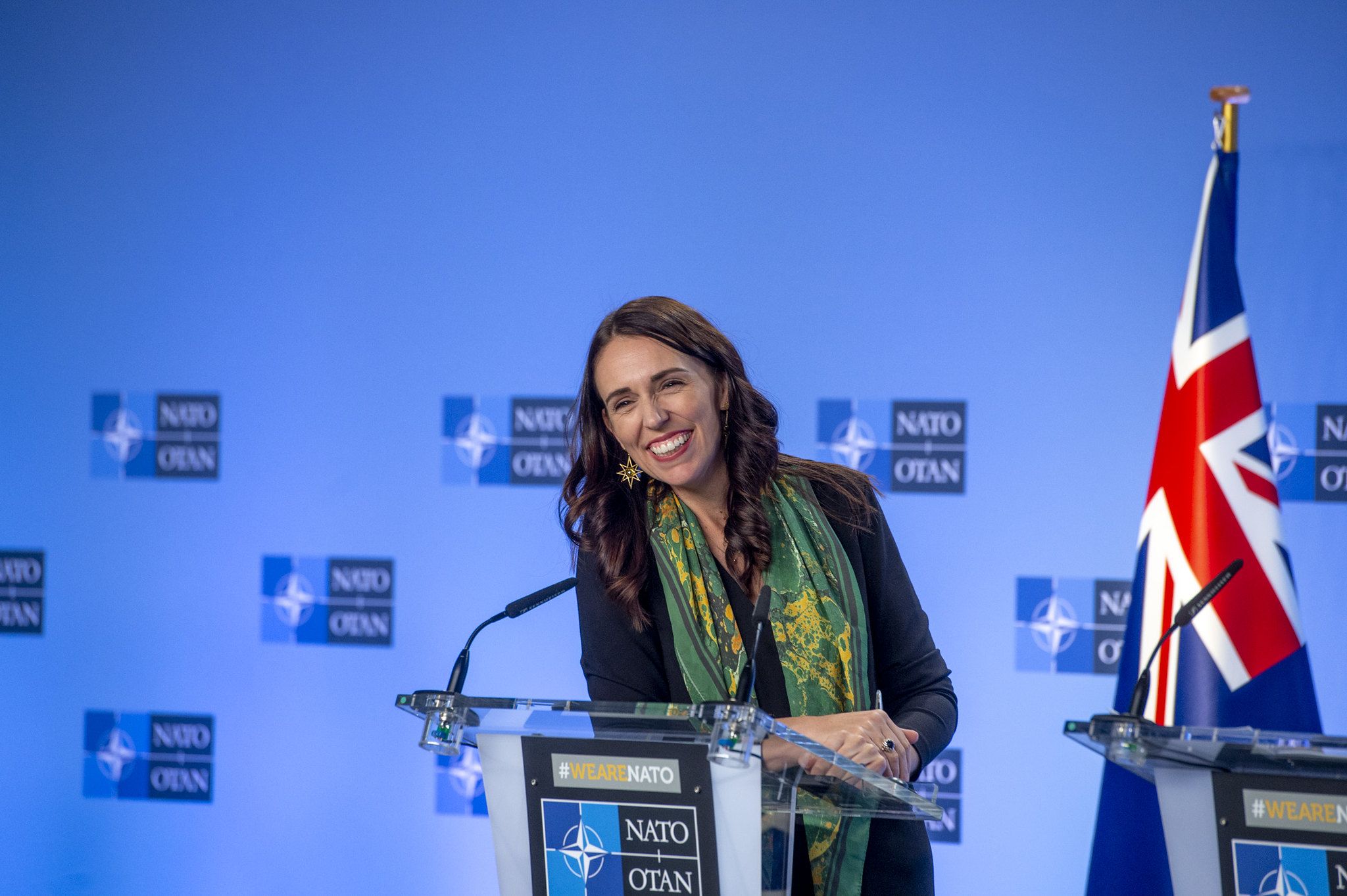 The Kiwi advanced against the U.S. Dollar, Pound, Yen and its antipodean cousin from Australia on Friday as domestic opinion polls were said to still indicate a solid chance of victory for New Zealand’s Labour Party in this weekend’s election.

“The latest polls have seen some slipping back from their highs for Labour, which remains firmly in the lead, and reducing the potential for Ardern gaining a full majority and suggesting the more standard outcome of a coalition being formed with the Green Party,” says Tim Riddell, a strategist at Westpac.

By many accounts all that remains to be determined by the weekend’s ballot, where nearly half of Kiwis have already voted through the post, is whether PM Arden governs with an absolute majority for her second term or if another coalition is necessary.

New Zealand First, a small right-of-centre party led by an ageing Winston Peters, claimed third place in the 2017 election to emerge as kingmaker in a post-ballot period of horse-trading.

That culminated in a coalition between Ardern’s Labour and Peters’ NZ First, with that borrowing confidence and supply from a diminished Green Party that did not meet the 5% threshold necessary to enter parliament again.

“Note that polls point to a Labour/Green coalition emerging as the most likely outcome of the weekend election, which means, as outlined in a new note, that a Weaker NZD is on the way,” says Kurran Tailor, a strategist at CitiFX.

This time out the star of NZ First is thought to have faded and opinion polls have the left-of-Labour Green Party as would-be kingmakers in Saturday’s vote, with the main opposition National Party having been discounted owing in part to leadership changes this year.

A coalition might be about the most bearish outcome that can be envisaged for the Kiwi on current polling, because any resulting period of horse-trading could cultivate uncertainty in the mind of the market about the likely stance of New Zealand’s fiscal and other economic policies for at least a period of time.

Coalition government might also slow down the legislative process, in the middle of a coronavirus pandemic and connected economic crisis.

Ardern’s leadership won both domestic and international plaudits this year when New Zealand emerged as first to fully contain the coronavirus, with subsequent waves of infection failing to reach even the stunted height of the first. The country of some 4.8 million has recorded just 15 fatalities out of more than 1,800 known cases and seemingly as a result of the government’s strategy, which has at some point moved from one of suppression to attempted elimination.

The turmoil of 2020 has bolstered and burnished Ardern’s leadership, unlike with numerous other national leaders and marking a turning of the tables for New Zealand’s youngest ever female leader.

“NZD is unlikely to be heavily influenced by New Zealand’s General Election,” says Elias Haddad, a strategist at Commonwealth Bank of Australia. “NZD/USD is consolidating near 0.6600.” 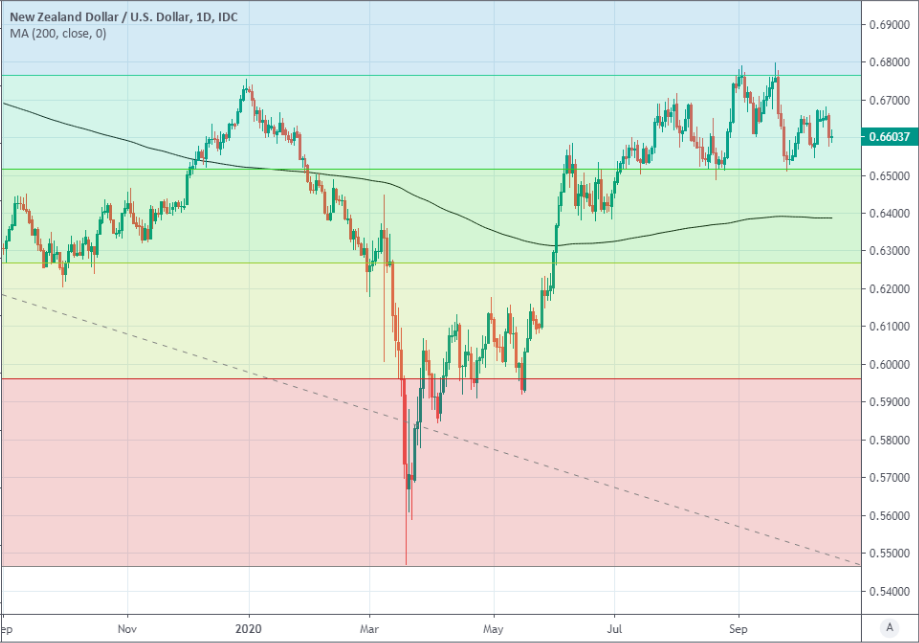 Above: NZD/USD, at daily intervals, middle of range between key Fibonacci levels and comfortably above 200-day average.

Previously, Ardern, Labour and many Kiwis endured a long two years of protest from the business community over minimum wage, housing market and immigration policies. Purchasing managers’ indices or PMI surveys reflecting subjective sentiments of companies fell to financial crisis lows following the election and remained there for a period that failed to produce matching declines in activity and New Zealand’s GDP.

Her election and business community sentiments gave rise to a near -10% decline in the value of the Kiwi Dollar over the three quarters from September 2017. But now mired in a pandemic where containment efforts have stymied activity and crushed incomes, at least some of those companies and individuals in question have been rescued by Ardern’s somewhat more trigger-happy approach to the purse strings and only time will tell whether this is rewarded in and after Saturday’s ballot.

“We expect the NZD to continue to gyrate around our 0.65 forecast for the next few quarters, with cross-currents aplenty,” says David Croy, a strategist at ANZ, who looks for the Pound-to-New Zealand Dollar rate to go on range-trading while remaining transfixed by Brexit headlines.

Beyond the election, New Zealand’s Dollar will likely keep in mind the Reserve Bank of New Zealand and its aversion to currency strength, although the November 03 U.S. presidential election will arguably be a greater influence in the weeks between October 17 and November 04 at least.

It’s widely said that a decisive victory for either candidate would be U.S. Dollar positive in the short-term, before things become more nuanced. A second term for President Doanld Trump offers medium-term U.S. Dollar strength while the Democratic Party candidate Joe Biden is a long-term Dollar negative.

“We now see GDP bouncing back a little bit more strongly through the second half of this year. The unemployment rate is expected to rise a bit more slowly than previously assumed, with activity a little stronger, the wage subsidy delaying job losses, and effects of the closed border not evident just yet,” says Sharon Zollner, chief economist at ANZ. “For the RBNZ, the outlook is looking a little more positive than was included in their August MPS forecasts, but downside risks remain. We expect that the RBNZ will drop the OCR 50bps in April next year, but risks around this outlook are looking more balanced, rather than firmly to the downside.”

New Zealand’s central bank came out of its corner swinging at the Kiwi Dollar in the second quarter of 2020 as the currency recovered strongly from March lows, supported by a coronavirus containment in China and subsequent recovery of the world’s second largest economy. Domestic fundamentals which for all of their flaws are still stronger than those seen in almost all other parts of the major currency sphere, have also played a part in the Kiwi rally.

The bank has effectively committed to implementing a negative interest rate programme in 2021 and, potentially, also a programme of foreign asset purchases that would result in large Kiwi Dollar sales on the international market. This has capped the Kiwi for now and helped support the GBP/NZD rate as it navigates the possibly-last chapter of Britain's Brexit saga.

“For the past four and a half years the UK political landscape has been dominated by Brexit related news. One way or another Brexit is set to be resolved on December 31 2020 as the UK’s transition phase ends,” says Jane Foley, a senior FX strategist at Rabobank. “The process of leaving the EU, however, will have a legacy which will continue to impact UK politics for some time...This suggests ongoing scope for volatility in GBP and limited upside.” 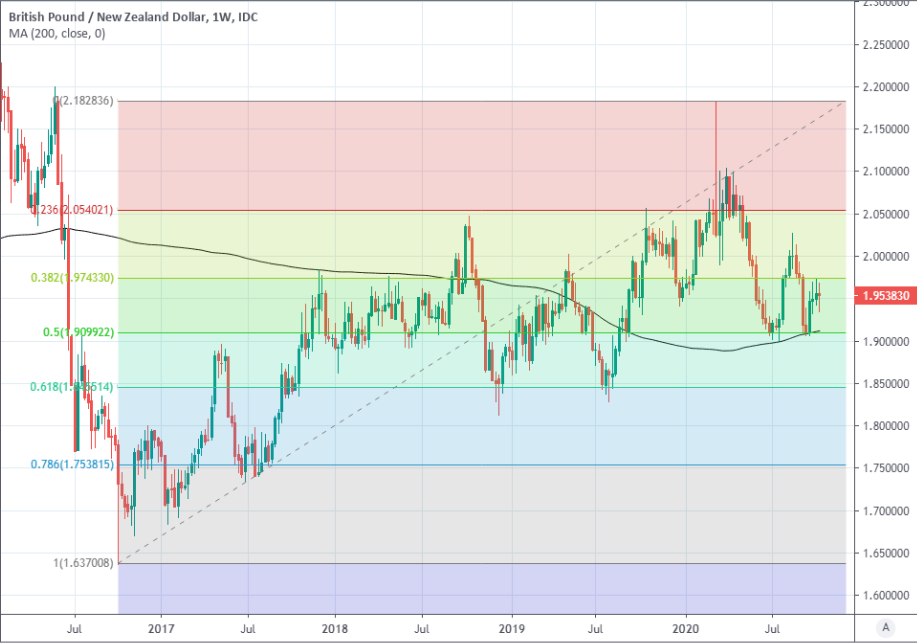