The New Zealand Dollar softened broadly on Wednesday but it was still able to keep and underperforming Pound Sterling on the back foot, a feat that could be made easier in the weeks ahead by the Kiwi's relatively brighter economic prospects, which will be in focus again overnight.

New Zealand's Dollar was lower against all other than the Dollar, Pound and Euro Wednesday ahead of the first-quarter GDP report due out at 23:45 London time, where consensus is looking for a -1% quarter-on-quarter fall in output to reflect a soft opening to the year and six days spent under the strictest form of 'lockdown.' The Pound-to-New Zealand Dollar rate was edging lower as the relative strength of the Kiwi called time on Sterling's rebound to the top of its 1.9137-to-1.9682 trading range.

The rub for Sterling though is that a fresh turn lower could crystalise ahead of the weekend if the first-quarter GDP plays out as markets envisage and analysts are right about the prospects of the Kiwi over the coming days. New Zealand's anticipated -1% contraction would make for a strong outperformance of the -2% fall seen in the UK, which also spent only one week in national quarantine that quarter, and some analysts argue this kind of thing will matter to the foreign exchange market going forward.

"New Zealand and the Eurozone show steeper rebounds than others, albeit from a much lower trough, mainly due to their earlier and more comprehensive lockdowns and more successful virus containment. The UK and Canada on the other hand appear to be laggards, matching their relatively slower progress," says Richard Franulovich, head of FX strategy at Westpac. 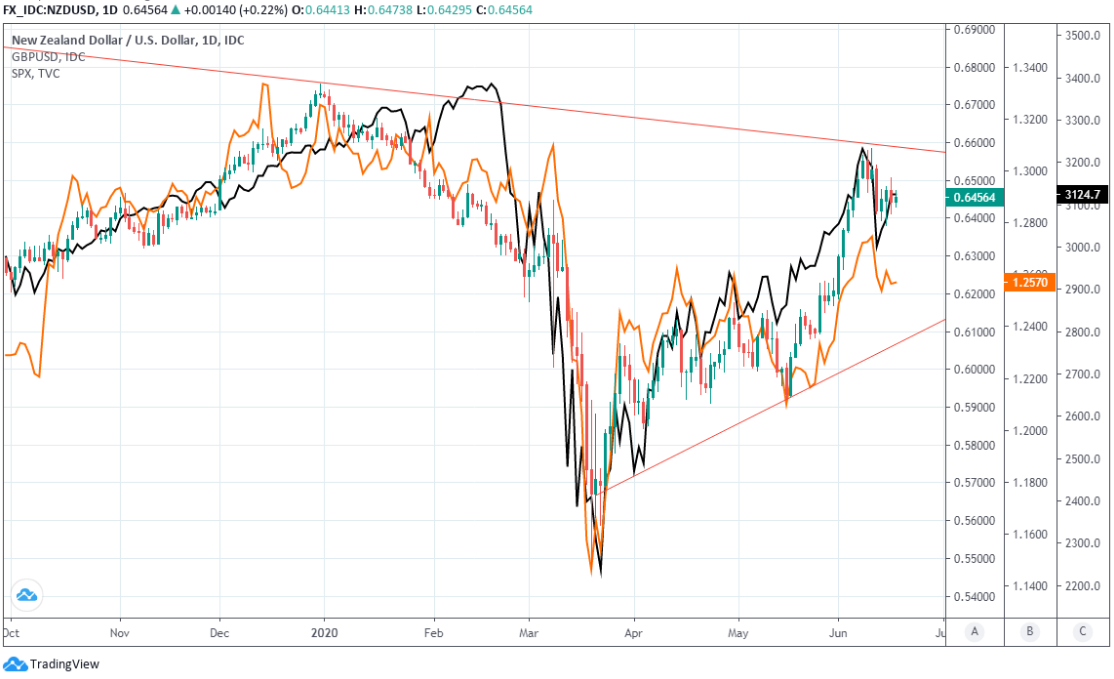 "Time will tell if these trends persist, but they warn markets should brace for at least a short spell of upside surprises in New Zealand, and to a lesser degree in the Eurozone, while any activity rebound in the UK and Canada could leave markets wanting. Currencies remain slavishly tied to the global risk mood so these growth divergences are more likely to surface in key crosses rather than the risk sensitive USD and JPY crosses," Franulovich says.

Franulovich and the Westpac team say that other sources such as OpenTable also corroborate the idea that New Zealand and some Eurozone economies are leading the global economic rebound, and that this could ultimately be reflected in places like the Pound-to-New Zealand Dollar rate.

Sterling has already declined nearly -8% since topping out against the Kiwi in early April, which was also when the coronavirus lost momentum in New Zealand. This enabled the Kiwi to recover lost ground from the U.S. Dollar and other currencies while the Pound remained a laggard.

New Zealand and Australia were more effective in containing the coronavirus so have been first to reopen their economies, which creates scope for antipodean outperformance at the beginning of a new economic cycle that would already provide a tailwind to commodity currencies.

This is negative for the Pound-to-New Zealand outlook, more so if Wednesday's data shows NZ outperforming the UK even before the coronavirus bit. 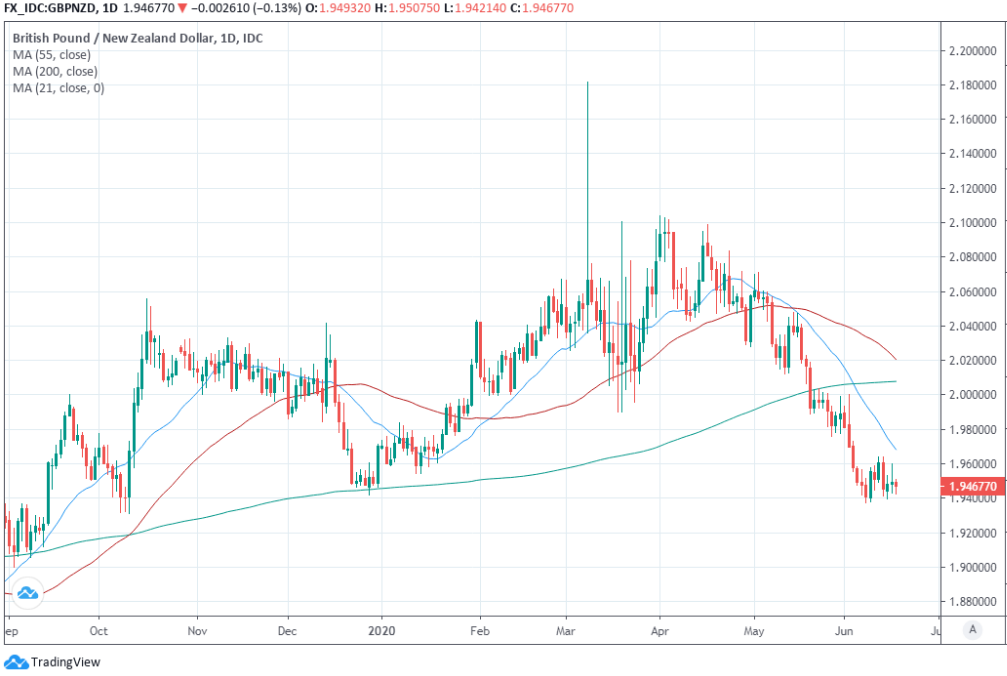 "The Kiwi spent yet another night slavishly following the S&P500 index, almost reaching 0.65 at one point before experiencing a mini-flash crash as news broke that China was had shut schools and moved COVID-19 level two," says David Croy, a strategist at ANZ. "The RBNZ would likely prefer the currency to be lower. But with New Zealand a relative ‘good news story’ and risk appetite still elevated, any jaw-boning is unlikely to have a lasting impact."

The contrast between NZ and UK economic fortunes is quantified by the Goldman Sachs Effective Lockdown Index, which assigns a score of between 1 and 100 to each country with those at the lower end of the scale representing economies that are less encumbered by restrictions and vice versa.

New Zealand had a score of 10 on June 16, while the UK had a score of 50 and was trailing all of its comparable economic rivals, although this contrast could grow further as the summer draws on and weigh heavier on the Pound-to-New Zealand Dollar rate given wide differences in progress toward reopening.

Children returned to schools and workers back to offices during May in New Zealand while over in Britain the government's attempt to get kids back into class was abandoned early on and now ensures most kids and many of their parents will remain at home at least until September. 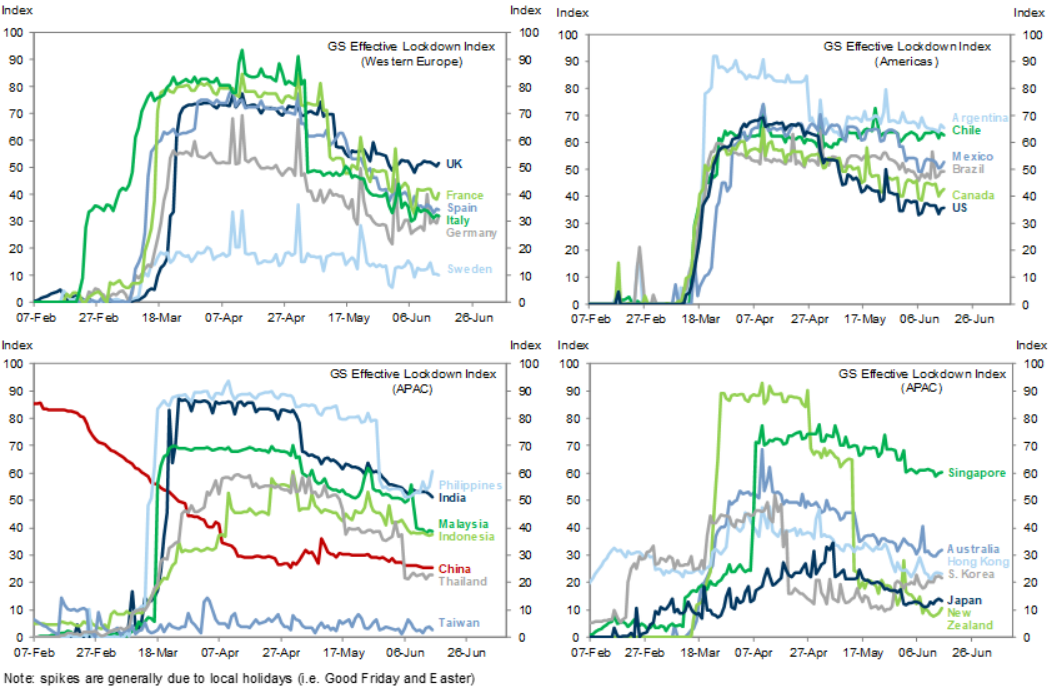 "NZD/GBP dropped back out of the 0.5140/80 congested resistance zone; a break through there would be bullish but it’s just range-trading," writes ANZ's Croy, who says a break below 1.9305 would be bearish for the GBP/NZD outlook. "Next Wednesday the RBNZ will acknowledge the positive surprise that NZ exited Level 2 lockdown much faster than they had assumed, but will be at pains to point out that beyond that, the outlook remains extremely challenging."

Meanwhile, the Bank of England (BoE) will quickly come into focus for the Pound-to-New Zealand Dollar rate following NZ's GDP number, which might limit Sterling's scope for gains in the event of a market disappointment.

The BoE is widely expected to expand its quantitative easing programme on Thursday although there's uncertainty over the likely size of the increase and analysts generally see the risks being slanted to the downside for the Pound.

"There are still three key domestic developments that are important for the Sterling outlook—Brexit, BoE policy, and longer lockdowns—all of which continue to trend in a modestly negative direction for the currency," says Zach Pandl, Goldman's global co-head of foreign exchange strategy. "The current crisis has caused likely the sharpest fall in output since the early 1700s, and our economists expect the BoE to announce another GBP100bn in QE this week so it can continue to closely coordinate with fiscal policy. And while negative rates still seem unlikely, we think the BoE will keep them in the toolbox. Taken together, we think domestic considerations should result in moderate further GBP underperformance over the near-term." 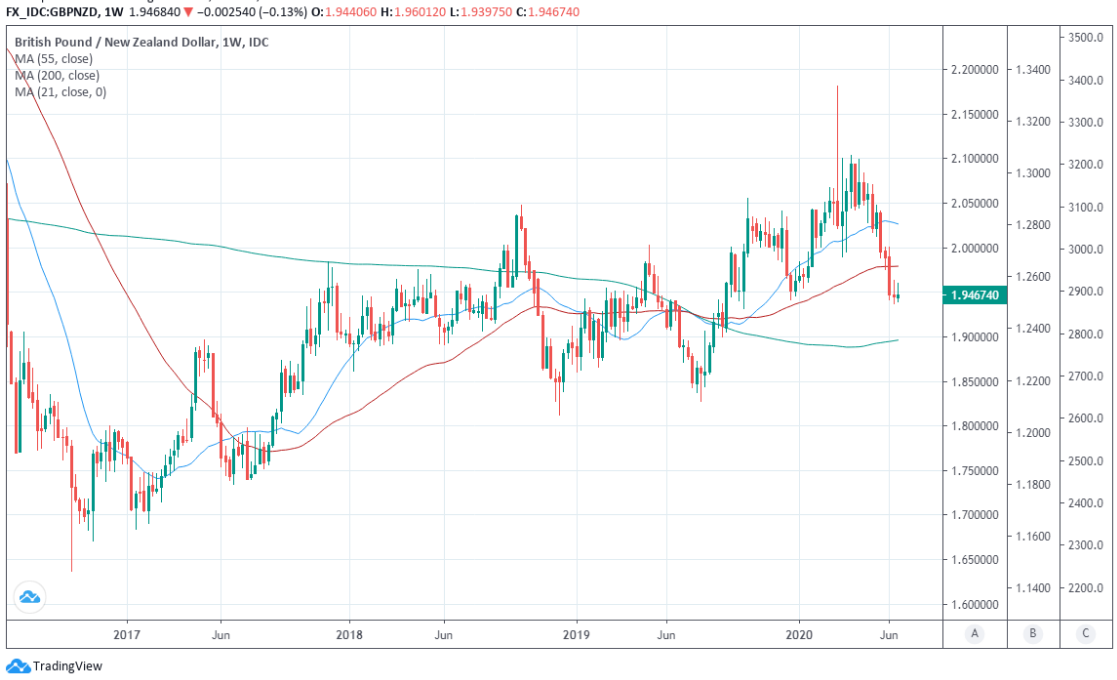