- GBP/NZD has reversed trend in short-term

- Likely to go higher although tough resistance ahead

The GBP/NZD exchange rate is trading at around 1.8885 at the time of writing, having risen 1.65% in the week before.

Our technical studies of the charts suggest a new short-term uptrend is established which will probably continue rising in the week ahead.

The 4-hour chart - used to determine the short-term outlook, which includes the coming week or next 5 days - shows the pair having risen steadily since the July 30 lows. 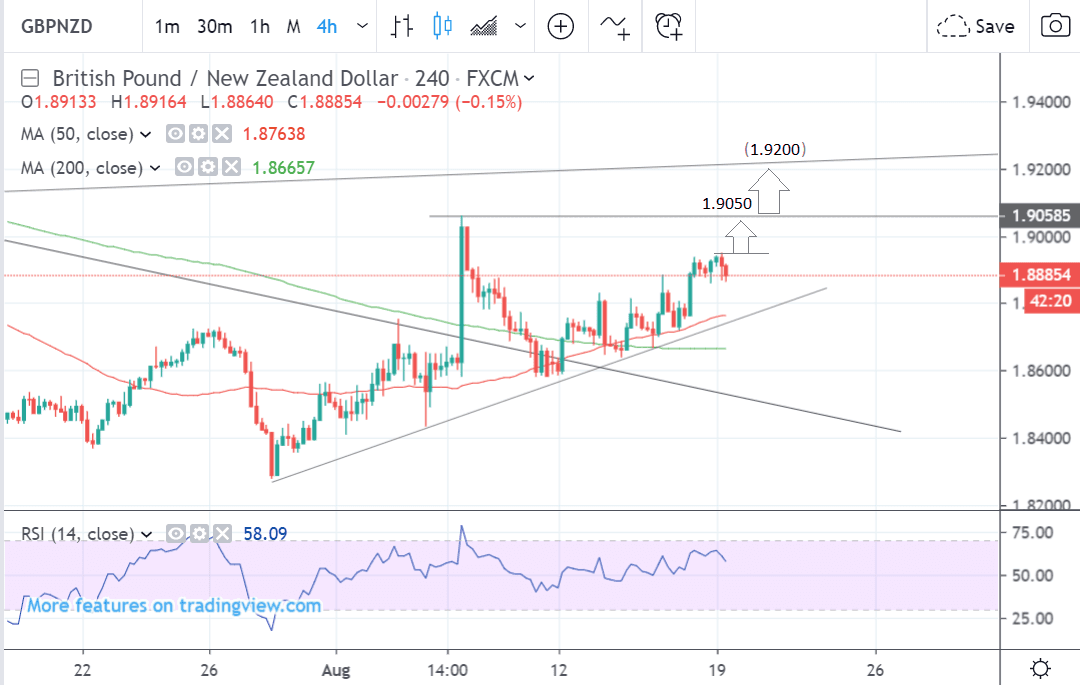 A break above the 1.8950 highs would probably reaffirm the uptrend and suggest a continuation up to the 1.9050 spike highs.

Above that, the going could get tough, but the pair will probably rise up through resistance in the 1.91s at the underside of a major up trendline.

The daily chart shows the medium-term target for the new uptrend if it continues higher. 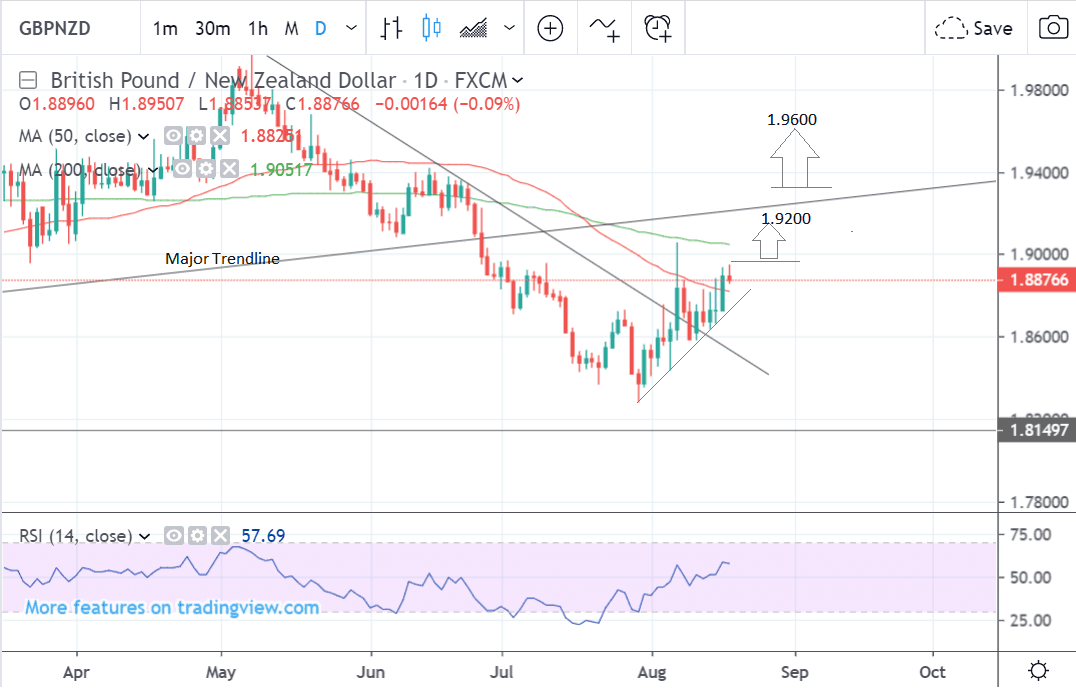 A clear break above the resistance zone and trendline at 1.9200, indicated by a break above 1.9250, would probably confirm a continuation up to a target at 1.9600.

The RSI momentum indicator in the lower pane is corroborating the bullish bias by rising in tandem with the exchange rate.

The weekly chart is showing the formation of a bearish measured move pattern which is incomplete and suggests an extension of the downtrend to a target based on the proportions of the pattern. 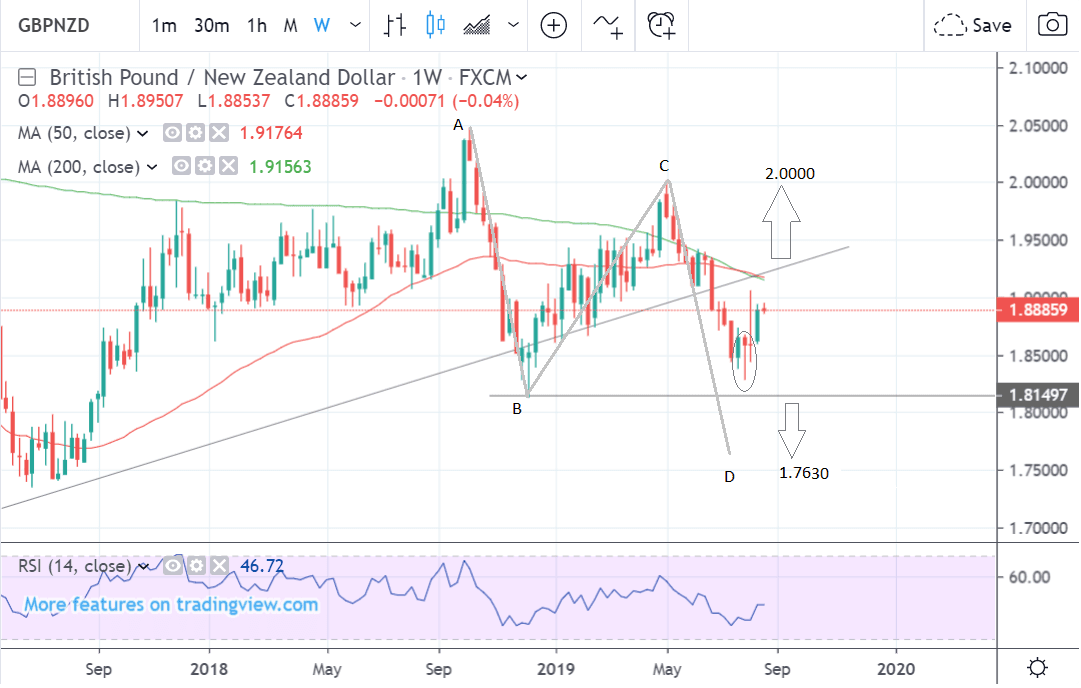 The length of the final c-d leg can usually be forecast using the length of a-b and in this case it suggests an end target of around 1.7630.

The upside target for the pair in the long-term, should it break higher is at 2.000.

The main release for the New Zealand Dollar in the week ahead is likely to be retail sales on Thursday.

"Subdued New Zealand economic data could see NZD/USD depreciate toward its 7 August low of 0.6378. Global Dairy Prices are expected to fall around 1% this week, while ASB expects Q2 retail sales to lift just 0.2%/qtr (Thursday). The outlook for retail spending remains subdued because consumer confidence is low and also because international visitor nights are falling. It remains to be seen whether the RBNZ’s 50bp August rate cut will translate into higher New Zealand consumer and business sentiment and therefore higher economic activity," says Kim Mundy, a strategist with CBA.

The global dairy trade auction data out on Tuesday afternoon could also impact on the outlook for the domestic economy as it measures the price of the country’s biggest export ‘dry whole milk’ powder. The auction 2 weeks ago showed a -2.6% fall in prices. A trend lower would not be supportive of the Kiwi.

Apart from the domestic economic docket, the New Zealand currency is likely to be impacted by global risk sentiment.

There is a small risk of a delay in the imposition of the 10% tariffs on Chinese goods which are likely to come into force on September 1 and December 15, which would be positive for the Kiwi.

Clearly, if the U.S. administration decided to delay the 10% tariff altogether that would give markets a massive boost even if it is still unlikely.

Market sentiment could also be bolstered on the trade front if there is news regarding Huawei whose temporary license is about to expire. Reuters reports that the department is expected to extend the license for another 90 days, which would likely be seen as a positive development by markets and the Kiwi.

Investor risk appetite has also been supported by reports from Germany that the government is contemplating the use of fiscal stimulus to support its sagging economy.

“Risk assets ended what was an extremely volatile week on a positive note. Der Spiegel reported that the German finance ministry was preparing to abandon its balanced budget rule in the event of a German recession,” says Nick Smyth, an analyst at BNZ.

The current climate of low growth and low yields is partly because all the heavy lifting of stimulus has been left to central banks who are running out of ammunition.

With the German move, however, there may be a possibility that more politicians will ‘jump on the fiscal stimulus bandwagon’ and say they too are going to start spending more.

“The reaction shows that markets are extremely sensitive to the outlook for fiscal policy, which would take some of the burden off monetary policy in supporting the economy. Global bond yields are at extremely low levels in part because of a global excess of saving over investment, and more activist fiscal policy would help address that balance, in addition to reducing the need for central banks to ease policy as aggressively,” says Smyth.

Brexit risks are rising as many rebel MPs don’t want a caretaker government to be headed by Jeremy Corbyn splitting up the opposition to a no-deal Brexit.

The probability of a no-deal is now 40% and although this is a negative risk factor for the Kiwi it is even more so for Sterling. Since this is an analysis of GBP/NZD worsening Brexit fears will weaken the Pound more than the Kiwi, even if it weakens both.

Domestic data may also impact the Kiwi in the week ahead due to growing concerns about the economy after the currency shrugged off the positive news about trade and German fiscal orientation on Friday because of poor NZD manufacturing and jobs PMIs which fell even deeper into contraction territory.