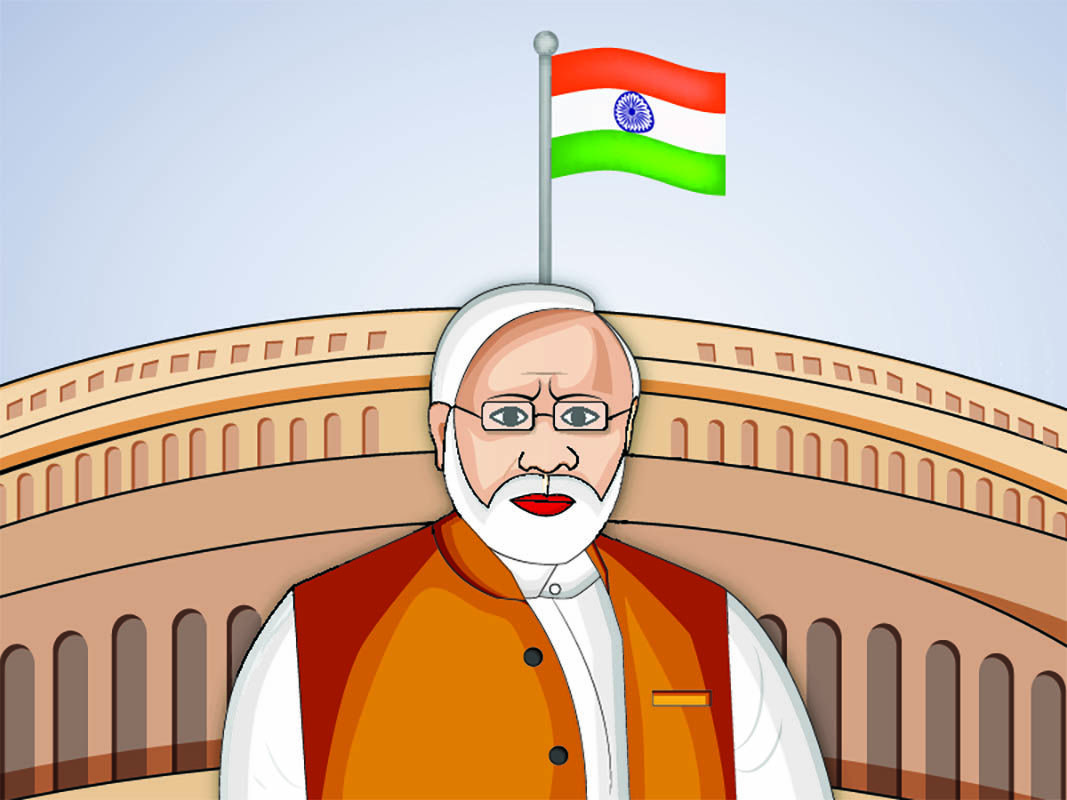 - Pullback is likely before a resumption higher.

- INR to be moved by investor risk appetite.

The GBP/INR rate was trading around 91.83 at the time of writing, after falling 0.5% so far in the new week, although the charts sugest the pair is overstretched and probably due a pullback in the short-term.

The 4hr chart - used to determine the short-term outlook, which includes the coming week or next 5 days - shows the pair stalling after breaking above a key trendline highlighted in red on the below charts. The market now looks to be at risk of correcting lower for several reasons.

Firstly, it's almost reached an important target at 92.80 and attainment of it would mark a major new high. And secondly, the relative-strength-index (RSI) momentum indicator is diverging with price which means it is falling at the same time as prices are making new highs or going sideways. This non-confirmation is a bearish indicator.

Anny break below the 90.92 October 17 lows would probably lead to a stronger correction back down to 90.00 and the realm of the trendline. However, and at the same time, the pair is still in an intact uptrend and given the importance of the existing trend we cannot discount the possibility of an extension higher.

Any move above the 92.80 target and 93.00 level would amount to confirmation that the pair is entering a new bullish phase, probably driving a continuation to 94.00 in the near-term. 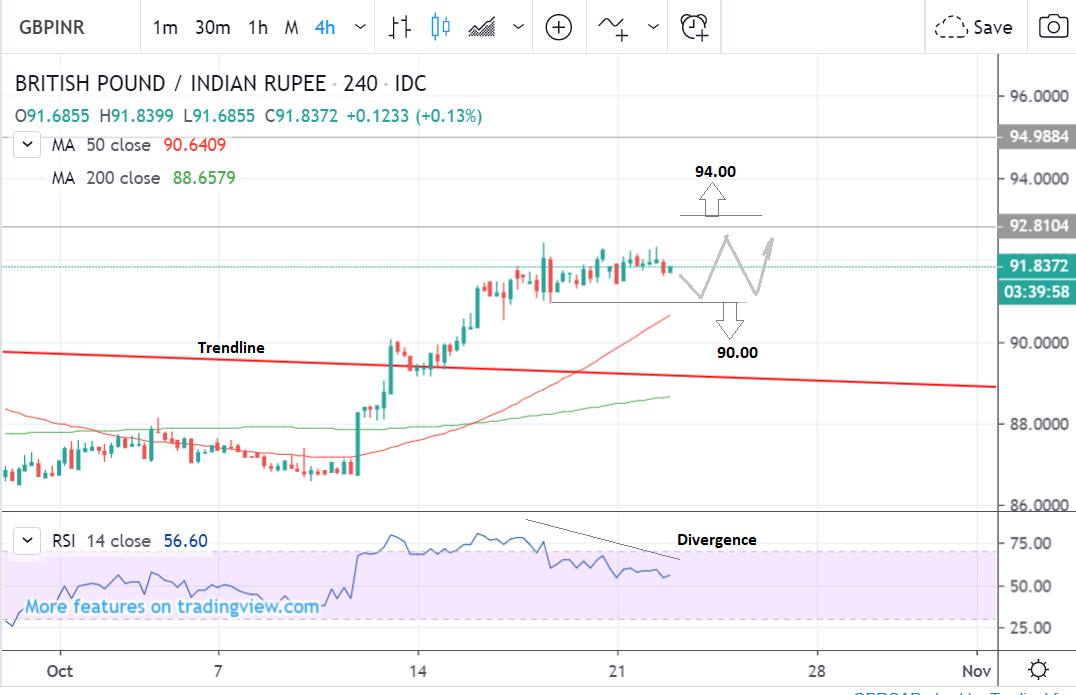 The daily chart shows how the pair has risen up sharply over the last 2 weeks but then started to stall and lapse over the last few days.

The pair has almost reached the next key target of the bullish rally at 92.80 and this could suggest a period of more subdued growth or corrective trading as traders take profits on their positions.

With the relative-strength-index (RSI) momentum indicator just exiting the overbought zone, above 70, the conditions are ripe for a pullback. There is a material risk of a correctional down to circa 90.00 followed by a possible recovery back up to 92.80 and the old target.

Given the uptrend is dominant there is also a risk it could also just simply continue rising, with a break above 93.00 opening the way to a move up to a target at around 95.00. The daily chart is used to give us an indication of the outlook for the medium-term, defined as the next week to a month ahead. 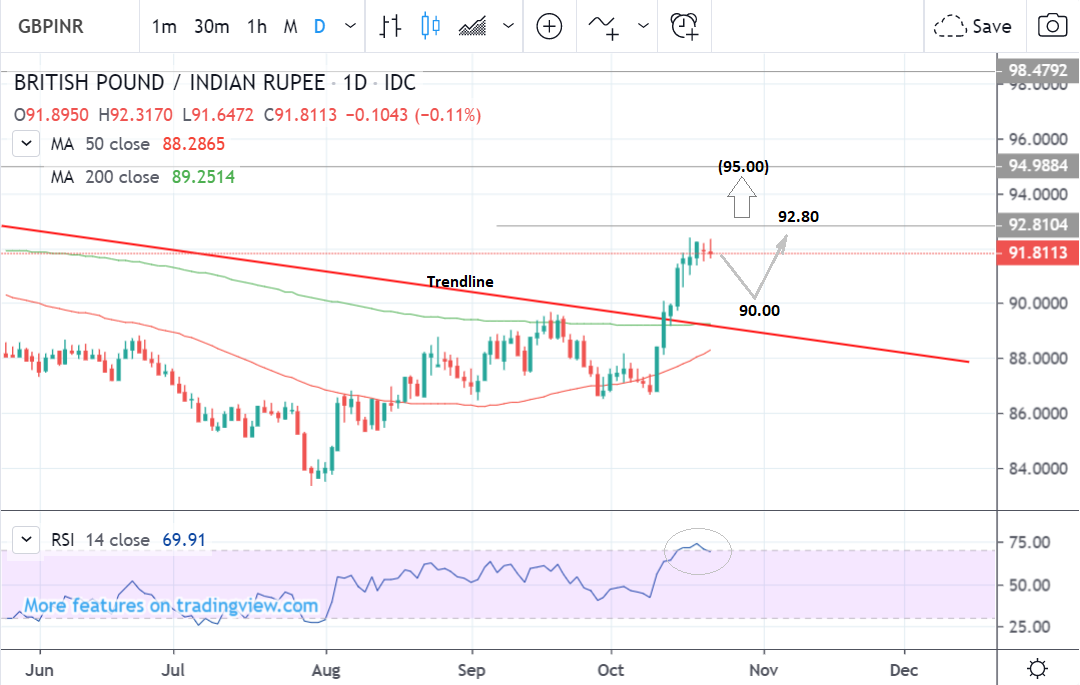 The weekly chart shows how the pair broke above the red trendline and formed a bullish ‘measured move’ or ABCD pattern at the same time. The break above the trendline was a key bullish transformative move for the pair and opens up greater gains in the long-term.

There is a chance the pair could continue higher to a long-term target at 95.00 or even 98.40. The weekly chart is used to give us an indication of the outlook for the long-term, defined as the next few months. 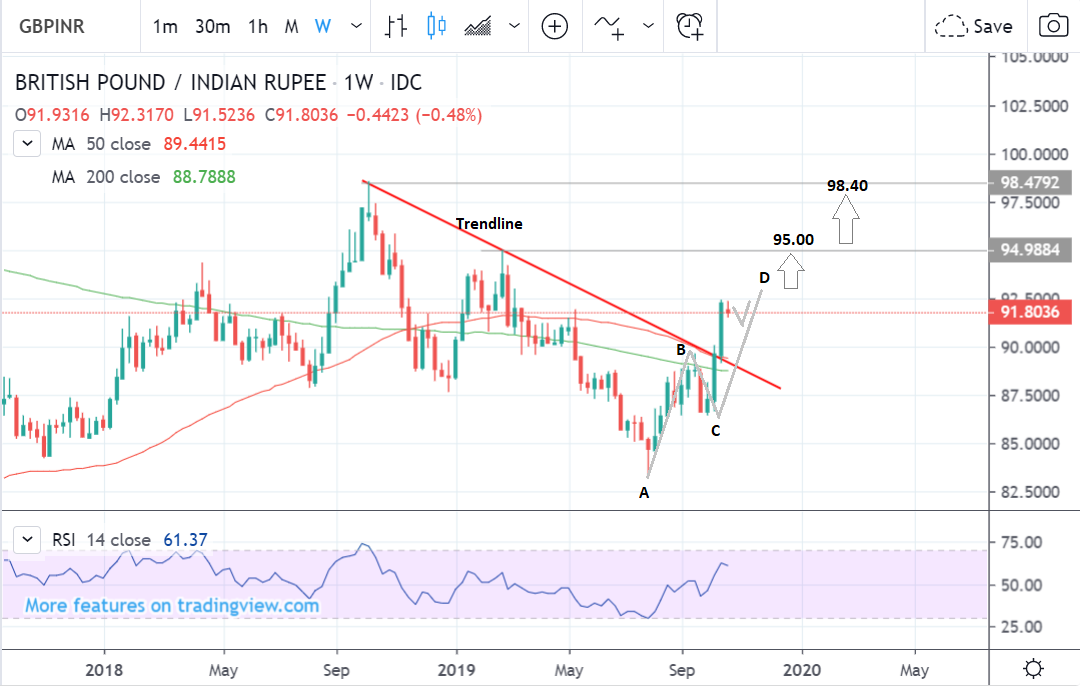 The main drivers of the Rupee in the near-term are likely to be global risk trends, geopolitics and the strength of the U.S. Dollar which tends to be negatively correlated to the Rupee.

Global risk appetite is recovering after positive developments on the trade deal front and Brexit, probably the two biggest risk factors currently facing investors. This is supporting risk assets including the Rupee.

“The vibe around US-China trade relations is better. Trump’s economic advisor Kudlow said that he saw the possibility of taking the December tariff increases off the table, as China requested, if trade talks go well,” says Jason Wong, an analyst at BNZ Bank.

More good news came from President Donald Trump, who said Monday that China has started buying of US farm products again. He also repeated the usual rhetoric that “The deal with China’s coming along very well. They want to make a deal…They sort of have to make a deal."

The deal needs to be written up and signed so there is a risk that outstanding issues could scupper it. However, comments from U.S. Trade Representative Robert Lighthizer indicated the deal might be ready for signing at the APEC meeting in Chile on November 16-17.

Another supportive factor for the Rupee is that the outlook for Brexit has improved.

“The prospect of a Brexit agreement and the possibility that the worst is over in terms of the trade war continue to see improvement in risk appetite, with our index moving above the 60% mark to a risk-loving setting,” says Wong.

Even if Johnson’s deal does not get the approval there will likely be a general election or a referendum bot outcomes which markets regard as relatively benign. A ‘no-deal’ Brexit, meanwhile, now seems virtually impossible.

The next key test will be on Tuesday evening at 19.00 GMT when Prime Minister Johnson’s Brexit deal will be put to a vote in Parliament, after twice being denied a vote. If it fails it will be dead in the water, according to experts. There is a chance it will win, and even if it doesn’t the alternatives do not look so onerous.

The Rupee is sensitive to the U.S. Dollar which when strong tends to weigh on the former. The Dollar is currently weakening due to a fall in safe-haven flows on improving global risk appetite.

This comes despite a supportive rates backdrop. U.S. 10 year yields have recovered back up to 1.8% and the yield curve - the chart of interest rates of loans of differing lengths - has gone from inverting back to steepening which is another positive sign, both for the Dollar and the U.S. economy.

“Global rates continue to probe higher, with 10-year rates across Europe and the US up about 4bps, seeing the US 10-year trade at 1.80%, its highest level in a month and up some 30bps in two weeks. Curve steepening remains evident with the US 2s10s spread up through 19bps,” says Wong.

This suggests politics is currently overshadowing interest rates as the Dollar’s main fundamental driver. This state of affairs could pass, however, resulting in a recovery for the greenback which would be negative for the Rupee due to its negative correlation.