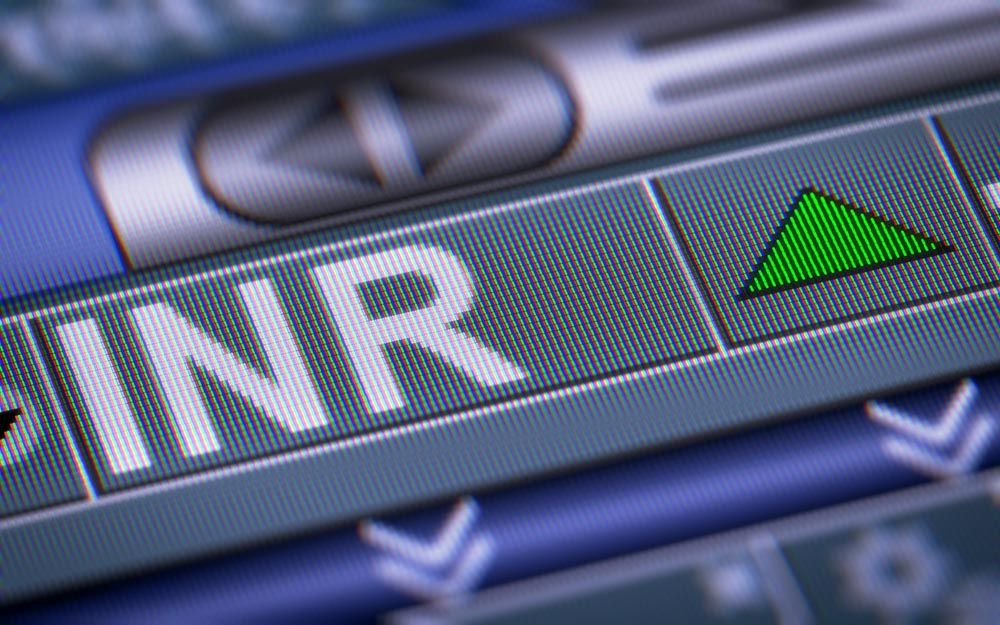 - Rupee to me moved by global risk trends

The Pound-to-Rupee exchange rate is trading at around 86.96 at the time of writing, down 0.43% this week so far.

The pair is therefore in the process of retracing the previous week's 0.8% rebound, and our latest technical studies of the charts suggest the pair is at a crossroads.

The 4hr chart - used to determine the short-term outlook, which includes the coming week or next 5 days - shows the pair in decline after peaking at the October 3 highs. 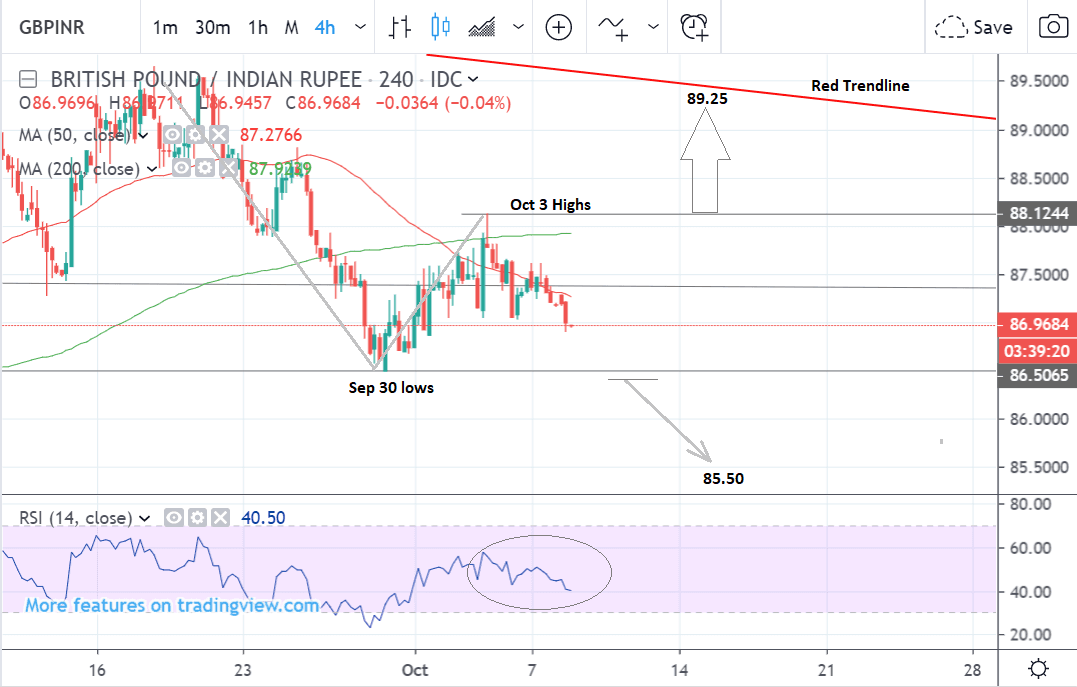 The ‘look and feel’ of the chart suggests the down-move will probably continue, to a potential downside target at 85.50, but this would only be subject to a clear break below the September 30 lows at 86.50.

Alternatively, it is also possible - particularly when looked at on larger timeframes - that the pair could stall, turnaround, and then go higher, up to a potential target at 89.25, but this too would be subject to a break above the October 3 highs.

The RSI momentum indicator in the lower panel is falling gently, suggesting weak bearish momentum but it is a secondary indicator that does not change our neutral stance.

The daily chart shows how the pair rose up during August but then rolled over and started to weaken at the September 18 highs. 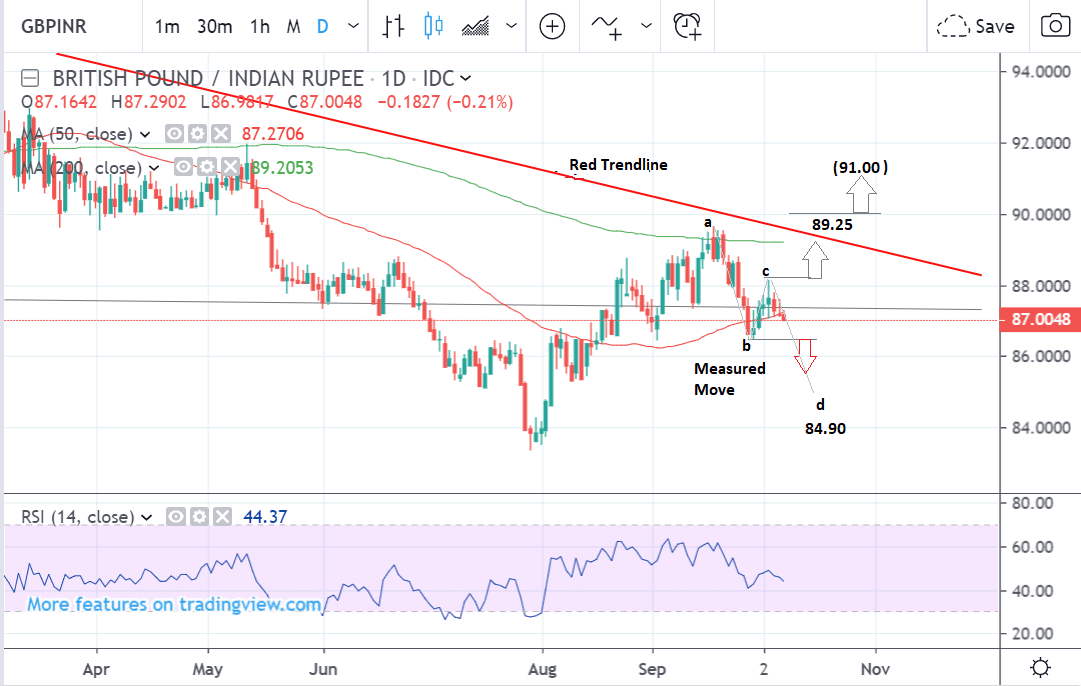 The first part of the move, the rally, remains intact and points to the potential for further gains even if the short-term outlook looks increasingly bearish.

A break above the October 13 highs at 88.15 would provide the necessary confirmation for a continuation higher to a target at 89.25 at the red trendline.

A break above the red trendline would be an important bullish development and result in a probable move higher to another target at 91.00 initially, though higher in the longer-term given the importance of the breakthrough.

At the same time, we cannot ignore some compelling bearish signs too.

One of these is that the pair seems to have fallen in what looks like a bearish measured move, or ABCD pattern, from the September 18 highs.

If this analysis is correct, then it is currently unfolding the final C-D leg lower, which could reach a potential target at 84.90.

Before expecting such a move, however, we would need confirmation from a break below 86.45.

The weekly chart is dominated by a large bearish head and shoulders reversal pattern at the highs. 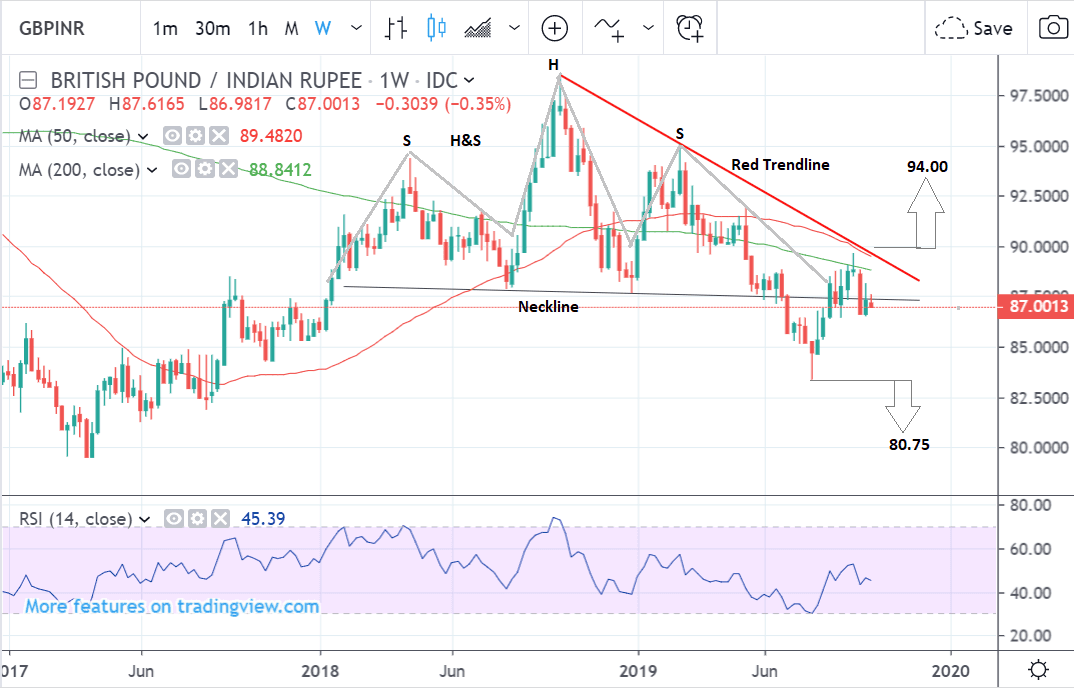 The pattern resulted in a move down to the July 30 lows at 83.33 but failed to reach its full potential of 80.75. There is still a possibility it could recapitulate and make the final downside target eventually.

A break back below the July 30 lows would provide confirmation of such a move down to the 80.75 target.

A break above the red trendline, on the other hand, would negate the H&S and suggest a much more bullish outlook.

Such a break would turn the tables and generate an upside target of 94.00 in the long-term.

The Rupee: The Critical Drivers

The main driver of the Rupee in the near-term is likely to be global investor risk appetite which it - like most emerging market currencies - is heavily impacted by.

The outcome of trade talks between China and the U.S. starting on Thursday is likely to heavily impact sentiment and the outlook for the global economy.

If talks produce a deal, sentiment will rise because the outlook for global growth will improve. In such a scenario the Rupee will also rise.

The consensus, however, is that talks will not produce a deal.

The latest comments from Donald Trump do not sound particularly optimistic.

”Can something happen? I guess, maybe. Who knows. But I think it’s probably unlikely,” said the U.S. President.

Tensions in Hong Kong could also impact talks after Trump called for the authorities to show restraint.

“If anything happened bad, I think that would be a very bad thing for the negotiation. I think politically it would be very tough,” said Trump regarding the HK situation.

Jason Wong, an analyst at BNZ Bank is also pessimistic about the chances of the two superpowers agreeing on a deal.

“Expectations are low for any deal to emerge from this 13th round of trade talks,” says Wong.

For him, “a best-case scenario from this week’s talks” would be for the US to agree to delay a proposed increase in tariffs on October 15 which would increase duties on $250bn of Chinese imports from 25% to 30%.”

Talks have already been hit by the news that China has ruled out talking about certain issues in talks, including intellectual property, technology transfer, and state subsidies.

This is likely to limit the success of the talks since some of the excluded issues are important for the U.S.

“China is said to exclude a commitment on reforming industrial policy or government subsidies, taking one of Trump’s core demands off the table,” says Wong.

One positive event on the trade front, however, is that the U.S. has agreed to lift a proposed ban on U.S. investors buying Chinese stocks.

On the domestic front, the Reserve Bank of India (RBI) decided to cut interest rates by 0.25% last Friday to help stimulate growth.

The fact it was an unanimous decision by the governing council suggests further cuts may be in the pipeline - something which could weigh on the Rupee going forward.

Furthermore, the view that India does not have the same resources as China to fight the global manufacturing slowdown could also weigh on the outlook for the currency.

“India does not have the deep-pocket capacity of China to turbocharge its economy through investment in infrastructure or pulling fiscal levers,” says Jeremy Choo, Ashima Tayagi and Sambit Mohanty of S&P Global Platts.

Without more fiscal stimulus the main tool left for the country will be currency depreciation from interest rate cuts.

This does not suggest a particularly positive longer-term outlook for the Rupee.