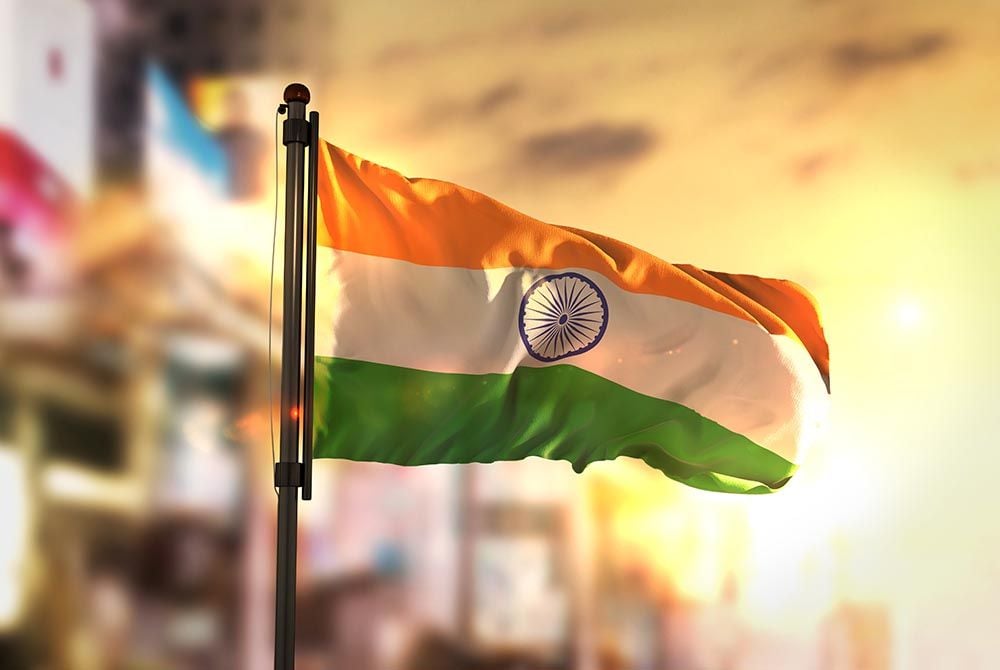 - Short-term uptrend has room to extend.

The Pound-to-Rupee rate was trading around 89.07 Tuesday after rising almost a full percentage point in the previous week and studies of the charts suggest a bullish bias could continue to take the market higher in the short-term.

The 4 hour chart, used to determine the short-term outlook over the coming week, shows the pair breaking to new highs at the start of this week in what is a bullish sign for the newly established uptrend. A further break above the 89.34 high would provide confirmation of yet more upside to a target of 89.80, the location of a major trendline.

At the level of the trendline, the pair will probably pull back and consolidate before eventually going higher. 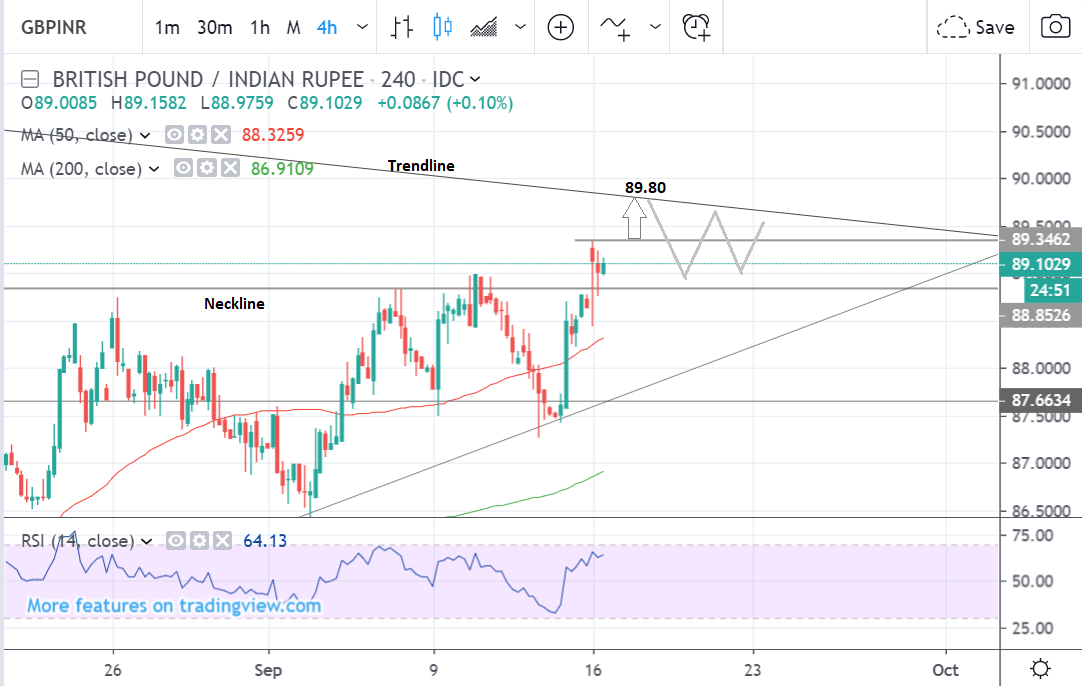 The daily chart shows the pair rising in a new uptrend yet before it can go any higher the market needs to break clearly above the 200-day moving average (MA) and the major trendline. A break above the 90.00 level would be a significant game-changer for the pair and provide confirmation of a continuation higher to a target of 92.00.

The daily chart is used to give us an indication of the outlook for the medium-term, which is defined as the next month ahead. The weekly chart shows the pair approaching a key trendline that defines the upward move and if broken, would open the way for a new extension higher. A break clearly above the trendline would see the pair continue up to a target of 95.00 in the long-term. 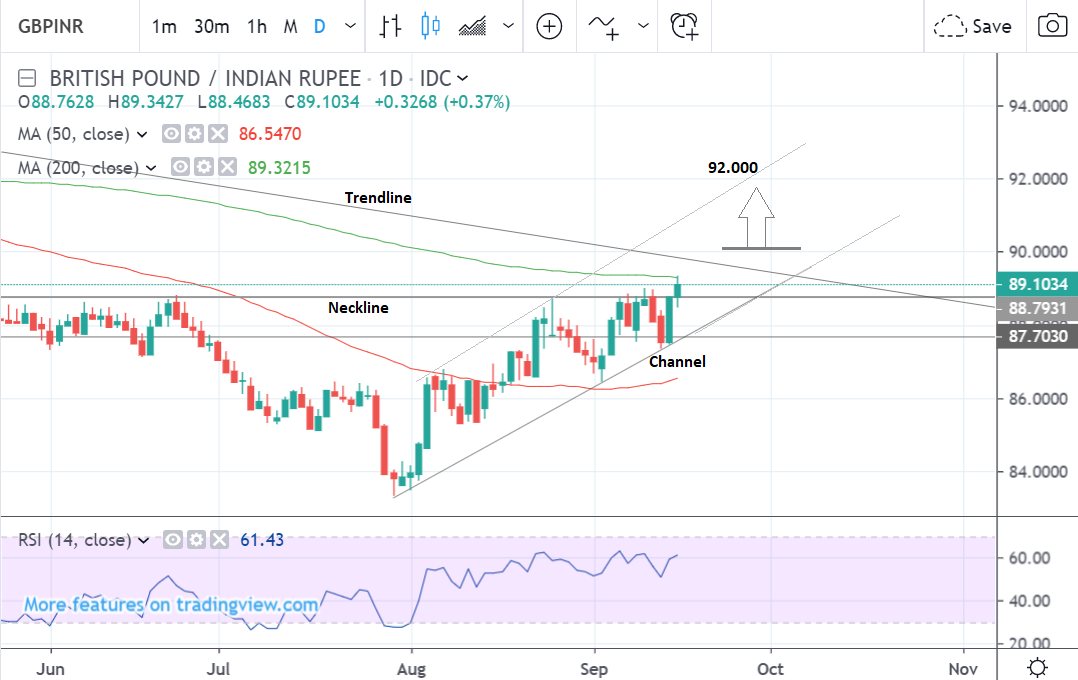 This target is calculated by taking the length of the move up prior to the trendline and extrapolating it higher after the break of the trendline.

Alternatively, a break back below the July 30 lows is still possible and would probably lead to a continuation down to a target of 80.75, the official target for the head-and-shoulders pattern.

The weekly chart is used to give us an indication of the outlook for the long-term, which is defined as the next few months. 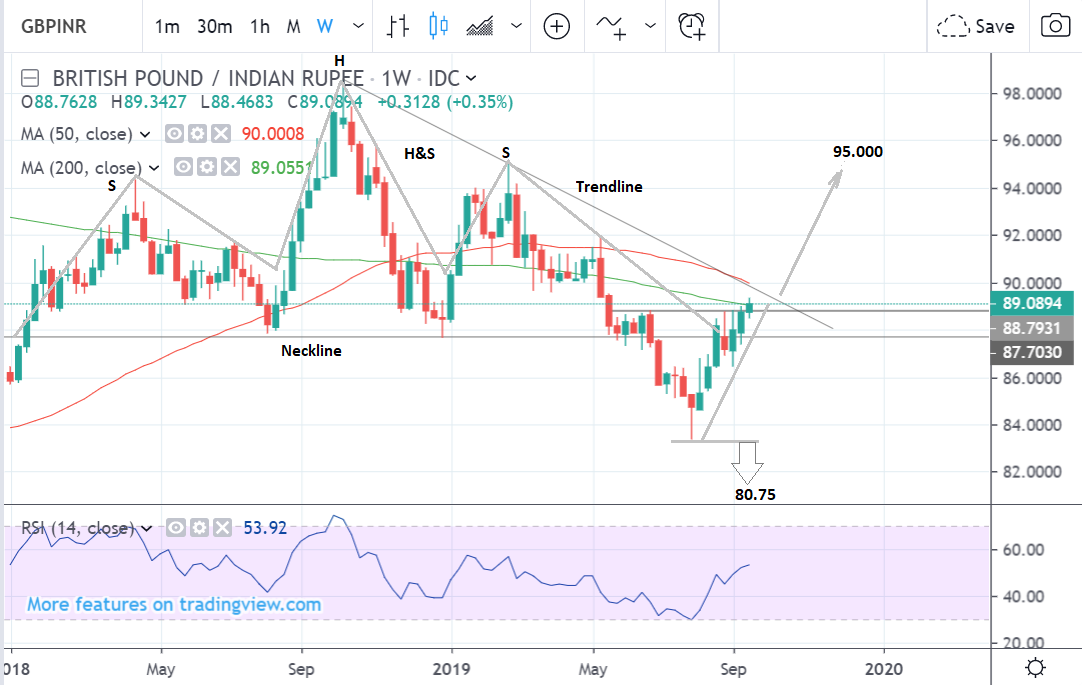 The main drivers of the Rupee in the week ahead are domestic stimulus efforts, the strength of the Dollar, commodity prices and global risk appetite.

The Indian government increased stimulus over the weekend when Nirmala Sitharaman, the finance minister, announced a fresh set of measures designed to boost exports and the housing sector. Sitharam’s measures include extending the tax reimbursement scheme, cutting export duties, fully automating the refund of Tax Credits (ITC) as part of the Goods Service Tax (GST) and expanding the scope of the Export Credit Insurance Scheme (ECIS).

“For the beleaguered housing sector the government will set up a fund to provide credit to under-construction homes," say Arup Roychoudhury and Indivjal Dhasmana, at Business Standard. "The government will provide Rs 10,000 crore, while an equal amount will be provided by investors.”

The measures are likely to help drive growth in the Indian economy and strengthen the Rupee in the process. They come on the back of previous stimulus efforts and fulfill promises made by the government in the election to boost fiscal spending. The Rupee is sensitive to the fluctuations of the Dollar like many other emerging market currencies, and the Dollar could be impacted by the outcome of the Federal Reserve (Fed) policy meeting on Wednesday.

Most analysts expect the Fed to lower interest rates by at least 0.25% but possibly more. A 0.25% cut is the current consensus expectation and has already been priced into the exchange rate. A deeper 0.50% cut is also possible and would weaken the U.S. Dollar and, therefore, support the Rupee.

U.S. data has been positive lately and this combined with easing trade tensions this has lowered the odds of a deeper 0.50% cut. According to market gauges of future interest rate expectations, there is a 68.1% probability of a 0.25% cut at the meeting on Wednesday. Lower interest rates are usually negative for currencies because they make the jurisdiction less attractive to foreign investors looking for somewhere to park their money; they thus lower capital inflows.

“The US central bank is widely anticipated to lower the federal funds rate by 25 basis points to a target range of 1.75-2.00% on Wednesday. But with the cut already fully priced in, investors will be more interested in the updated economic projections and dot plot,” says Raffi Boyadijian, an analyst at broker XM.com. “The easing in trade tensions has led to some paring back of aggressive rate hike bets in recent days but if the Federal Open Market Committee’s (FOMC) predicted rate path is still substantially above that of the markets’, Treasury notes are likely to be sold off, driving yields higher and in turn, the US dollar.”

Another driver of the Rupee, global risk trends, appear to be easing, which should help underpin the Indian currency. The currency could also be buoyed by talk of a possible “interim” trade deal. Reports suggest President Trump might be in favour, saying “it’s something we would consider” although he gave the impression of a ‘deal’ or ‘no-deal’ being a binary decision.