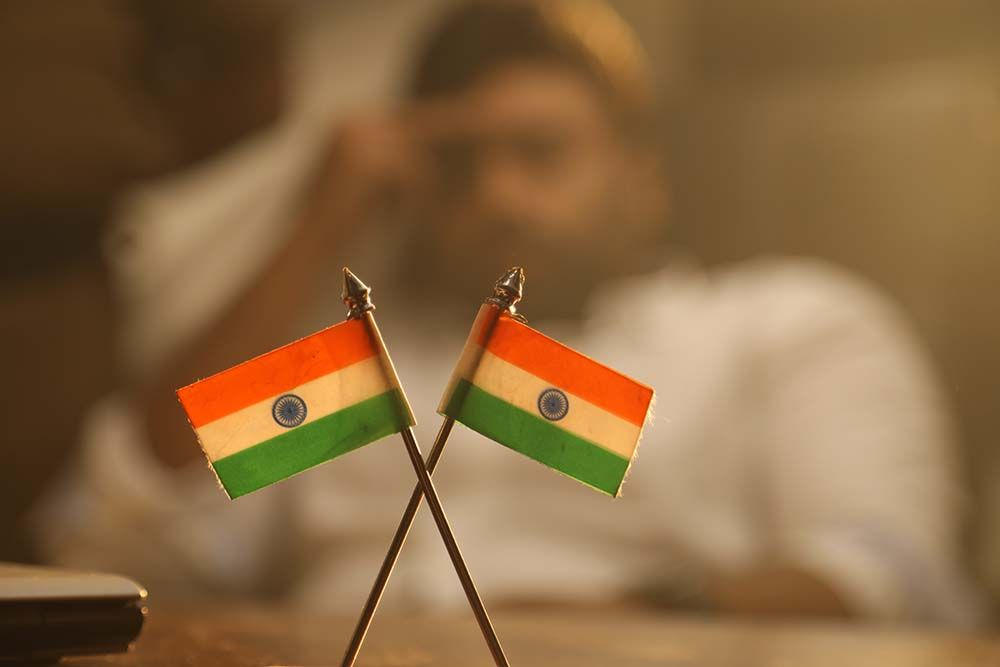 - Break below 88.00 to confirm extension lower

Short-term momentum lies with the Rupee which has the chance to make ground on Sterling over coming hours and perhaps days. The broader picture is however one of a rangebound pair that should keep losses by Sterling relatively marginal.

The GBP/INR exchange rate is trading at 91.09 at the time of writing, up a tenth of a percent so far this week amidst increasing U.S.-China trade tensions which should weigh on the outlook for global growth, especially for emerging markets like India. 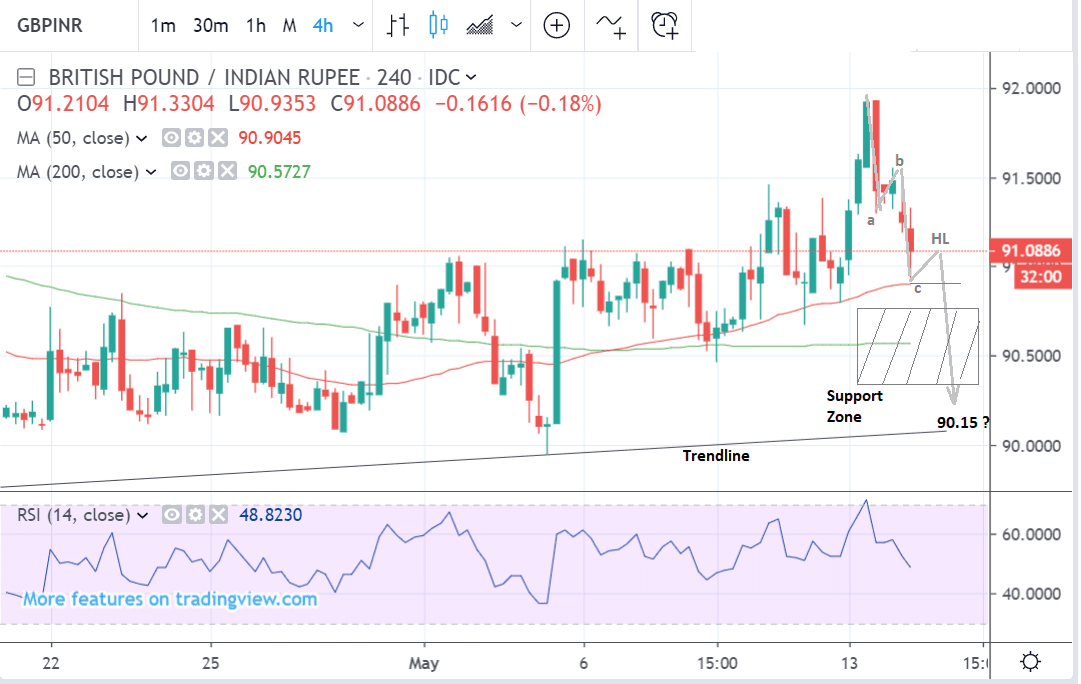 The pair had peaked at 91.96 on Monday and although the uptrend remains technically intact the sheer force of the fall back to current levels, combined with the lacklustre momentum on the daily chart (below) and the overhead resistance from the 200-day moving average (MA) suggests there is a case for a short-term extension lower. 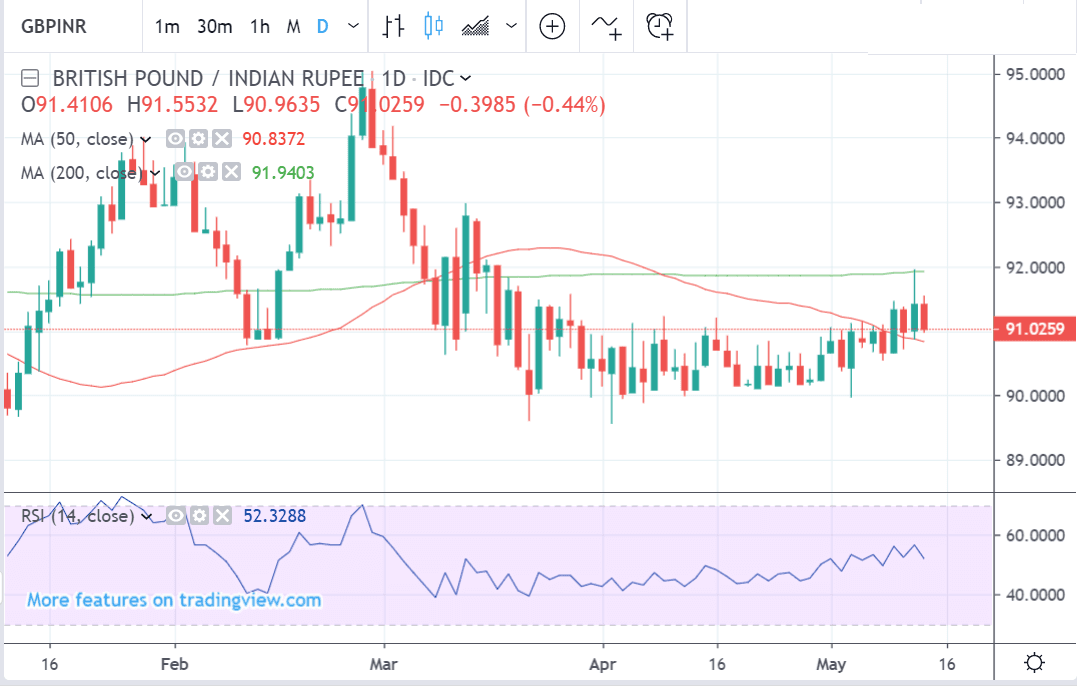 The move down could go as far as a possible target at 90.15 where a minor trendline is situated.

The problem for those betting on a notably stronger Rupee is that there is not exactly open ground lying below the exchange rate, and the location of the 50-day MA at 90.84 and the 200-week MA at 90.27 are both likely to impede further downside progress.

They present a support zone through which bears will find the going increasingly difficult. 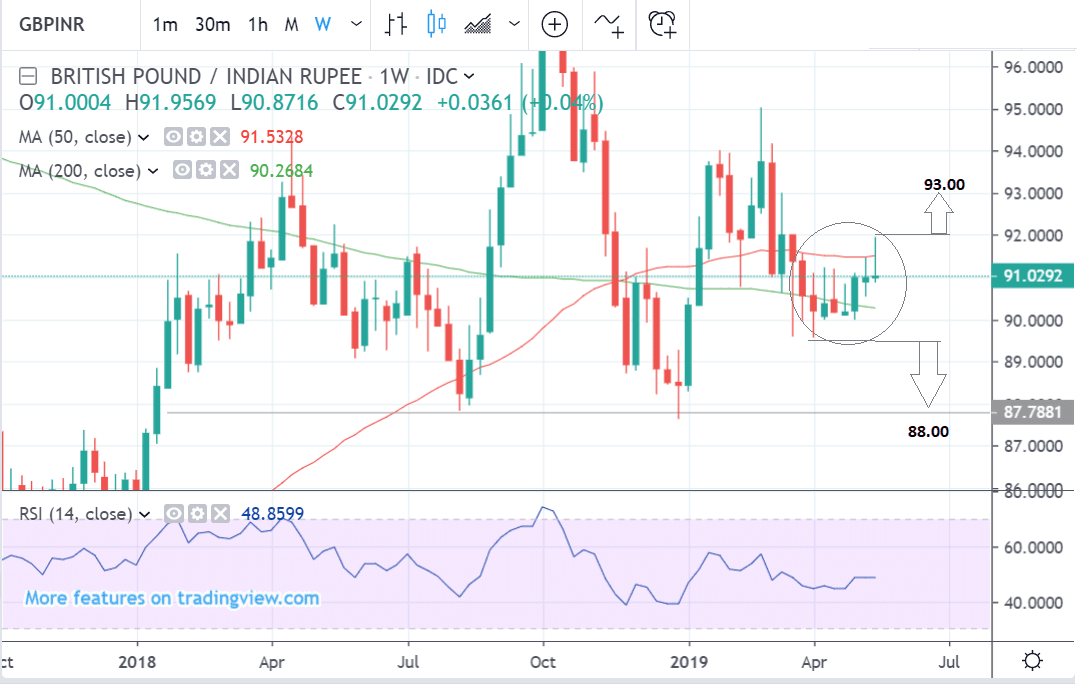 Taking a step back, the pair remains stuck in a tight range between the 50 and 200-week MAs as shown on the weekly chart. Only a clear break above last week’s highs would signal a definite break higher, to a target at 93.00. Likewise a clear break below the 89.55 April 2 lows would probably lead to a continuation down to a target at 88.00. 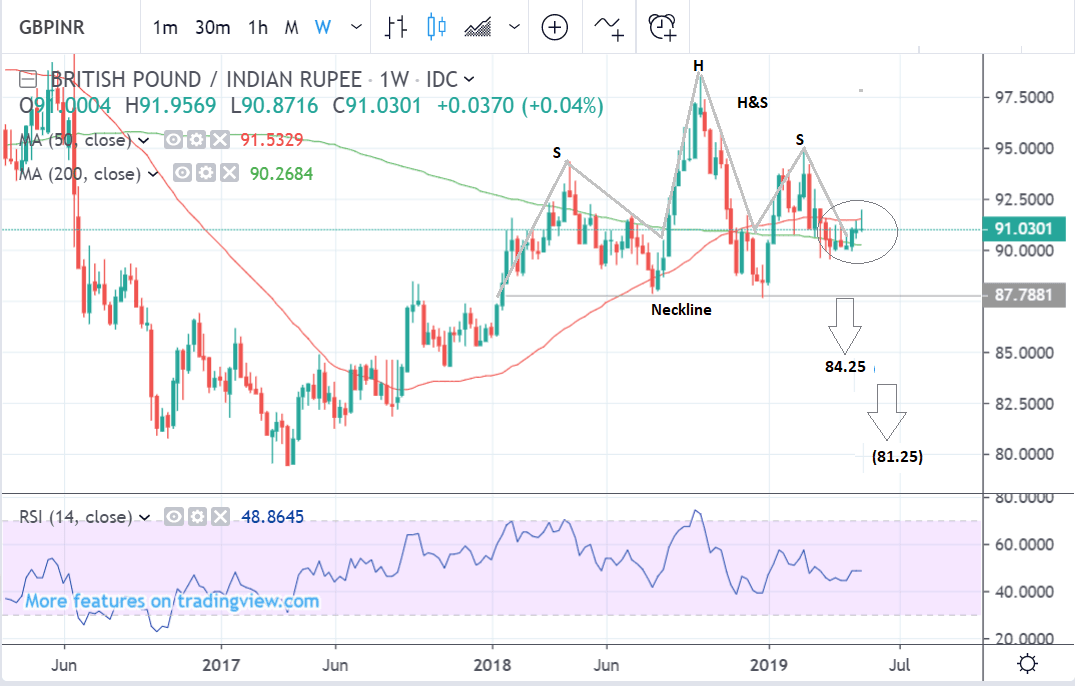 88.00, or thereabouts, is also the level of the base, or neckline of a probable bearish head and shoulders (H&S) pattern which has been forming quite clearly on the weekly chart.

The H&S is composed of three peaks, the central one of which is ‘the head’ (in the middle) with two slightly lower peaks either side: ‘the shoulders’. The neckline connects the intervening trough lows and is used as a confirmation level. If the exchange rate breaks below the neckline it confirms more downside.

There is also a possibility of a further decline to another target that is even lower at 81.25, which is based on a percentage of the height of the pattern extrapolated lower.

The main event on the horizon for the Rupee is the publication of the results of the Indian general election on May 23. Current expectations remain that the governing BJP party will win a majority and continue to rule with Nahendra Modi at its head.

The main area of uncertainty is the extent of the win and whether it will be sufficient to provide Modi with the mandate he needs to introduce further economic reforms markets deem necessary to continue modernising the economy.

The bigger BJP’s win is, the more of a boost it is expected to give the Rupee.

Yesterday saw the release of Indian inflation data for April, which undershot expectations of 2.97%, coming in at only 2.92% instead. Nevertheless, this was higher than the 2.86% previously. The rise was attributed mainly to food price inflation.

Inflation has been trending lower since it peaked at over 12% in 2013. If the trend continues it is likely to be negative for the Rupee as it will probably result in lower interest rates which are closely correlated with the value of the currency.

Interest rates tend to impact on foreign capital inflows, with higher rates attracting and keeping more foreign capital than lower rates, although in the case of India the effect is less clear cut as capital flows are more regulated - although this is one of the areas Modi and his BJP party have targeted and may well target for more reforms.

The other key driver of the Rupee is global investor risk trends.

When investors grow risk averse they tend to exit riskier emerging market (EM) assets such as Indian equities and put their money into safer assets. The outflows have a negative effect on the Rupee.

The recent escalation in the trade war between the U.S. and China dampened risk appetite and led to a move out of riskier EM assets which hurt the Rupee. If tensions continue to ratchet up, or there are signs of a negative impact on global growth, the Rupee could weaken further.

The implementation of more tariffs by both superpowers over the last few days, however, is likely to be as bad as it gets for a while, and could mark a temporary low point for relations, from which there is nowhere to go but up, with a corresponding positive bias from that risk factor, for the Rupee.