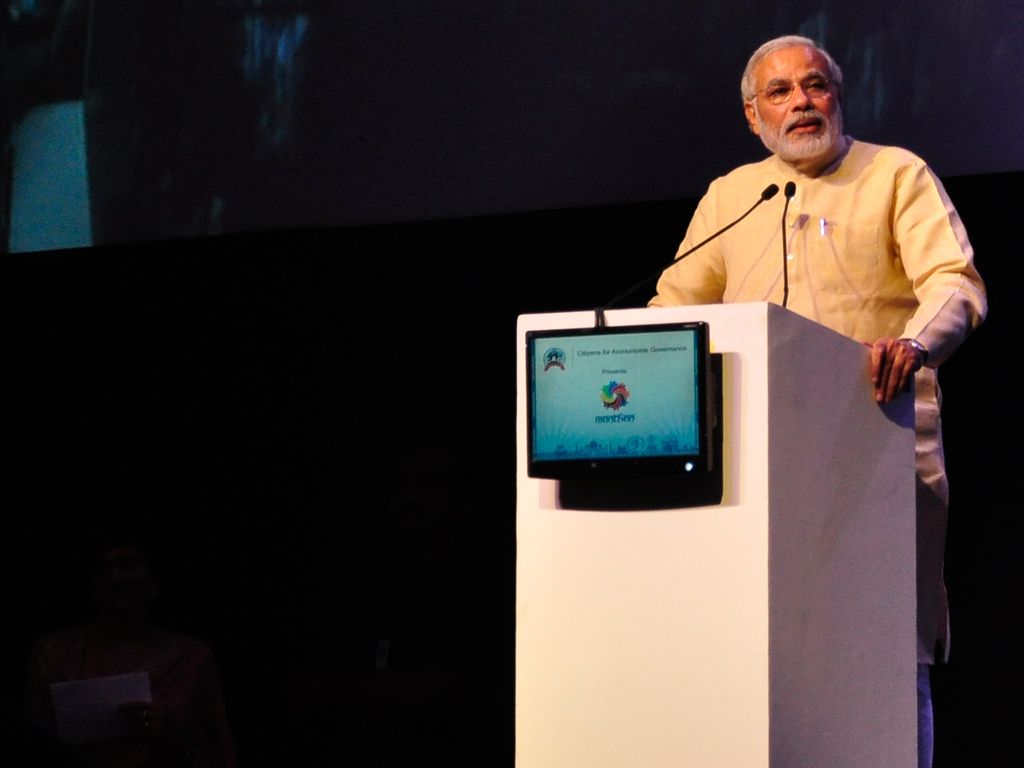 Above: Sterling-Rupee volatility could increase once the outcome of the ongoing Indian election is made known. Image: Narendra Modi, file photo. Image sourced Flickr, reproduced under CC licensing

- Break below 88.00 ‘neckline’ would be key to extension lower

- Oil could be a driving factor for the Rupee this week

The Pound-to-Rupee exchange rate is trading at 90.18 at the time of writing, down marginally on the previous week. In fact, over the course of the past month trade in the exchange rate has been relatively settled: the pair is still in a sideways trend on the daily chart.

However, the longer-term picture appears to favour the Rupee with the GBP/INR sitting with a broader downtrend: 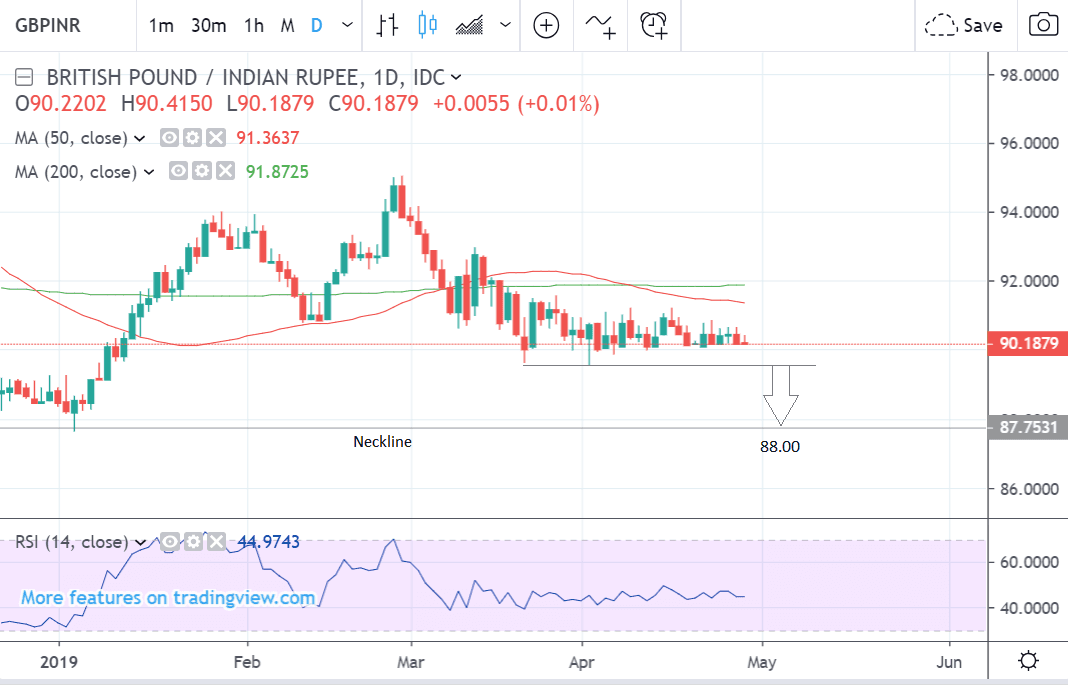 The bearish decline all through March suggests the resolution to the current sideways trading action is tilted to the downside, particularly given the old adage amongst technical strategists that ‘the trend is your friend’. 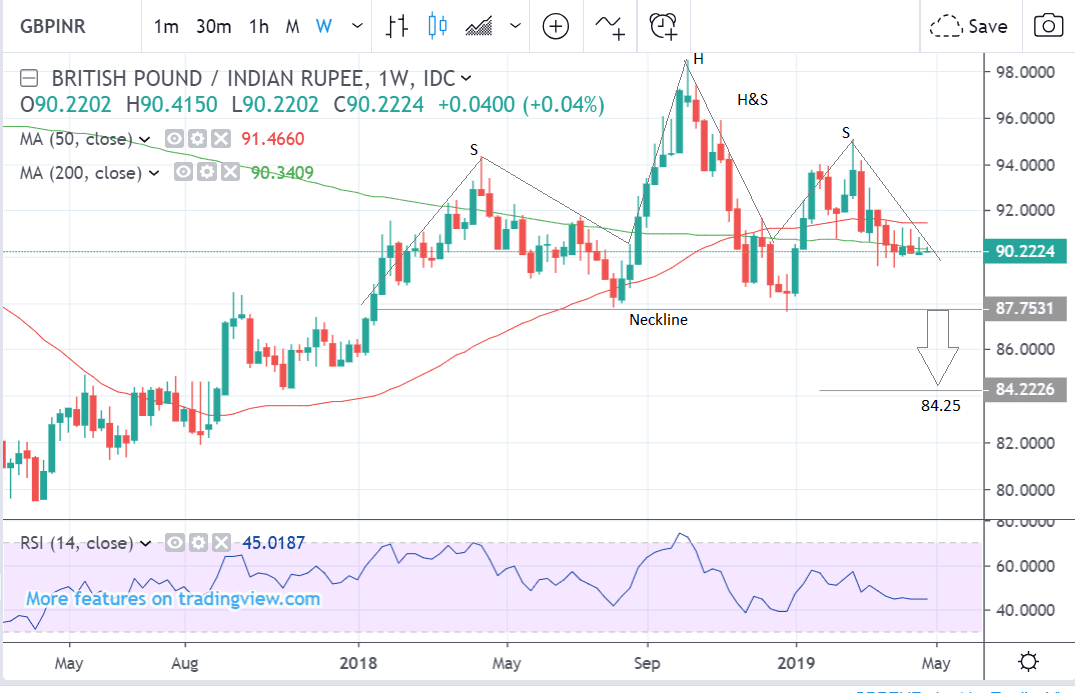 From a technical perspective, the bearish outlook is supported by a large head and shoulders (H&S) reversal pattern on the weekly chart.

The H&S is composed of a peak ‘the head’ in the middle of two slightly lower peaks either side: ‘the shoulders’. The neckline connects the intervening trough lows and is used as a confirmation level. If the exchange rate breaks below the neckline it confirms more downside.

The exchange rate has not yet reached the neckline, and is currently being supported by the 200-week MA in the 90.90s. This would first have to be broken before expecting more downside.

A clear break below the 89.60 March 21 lows, however, would confirm clearance and open the way down to the next target at 88.00. A break below that would then provide the go-ahead for deeper declines.

The general election in India is expected to be a likely drivers for the Rupee but given we will not get the results until May 23, it is unlikely to impact on the currency until then. After that the risk appears to be tilted in favour of a recovery for the Rupee, as the ruling BHP party will probably return to office, given the most recent run of poll results, which put them in the lead with a small majority.

Oil prices are another key factor that could influence the valuation of the Rupee. India has to import most of its fuel, and oil accounts for a third of all its imports. Rising oil prices, therefore, have a direct impact on the balance of trade, and demand for the Rupee.

Previously rising oil prices had been a dampener on the Rupee, but then last week crude formed a top and started to decline; it is currently trading at $63.00 per/barrel, over $3.10 below its 2019 peak. If the decline continues it will support Indian economic activity, and the Rupee by extension.

The main driver of oil prices of late are the impact of the end of waivers on Iran oil sanctions put in place by the U.S. Previously these allowed exemptions from sanctions for certain importers, such as India, China and South Korea, however, President Trump has signalled waivers will end on May 2 (Thursday).

Whilst America, and some financial analysts, argue large suppliers such as the Saudis and UAE will be able to fill the gap left by the end of waivers, others are more sceptical and see the possibility of a surge in oil prices on limited supply.

“At present, all signs point to higher oil prices. If no real additional oil is brought onto the market, shortages will become visible within months. Statements made by U.S. president Trump and U.S. Secretary of State Mike Pompeo that Saudi Arabia and the UAE will add supplies to counter the loss of Iranian volumes are currently only wishful thinking, and not based on any hard promises from Riyadh or Abu Dhabi,” says Dr. Cyril Widdershoven a global energy expert writing for oilprice.com. 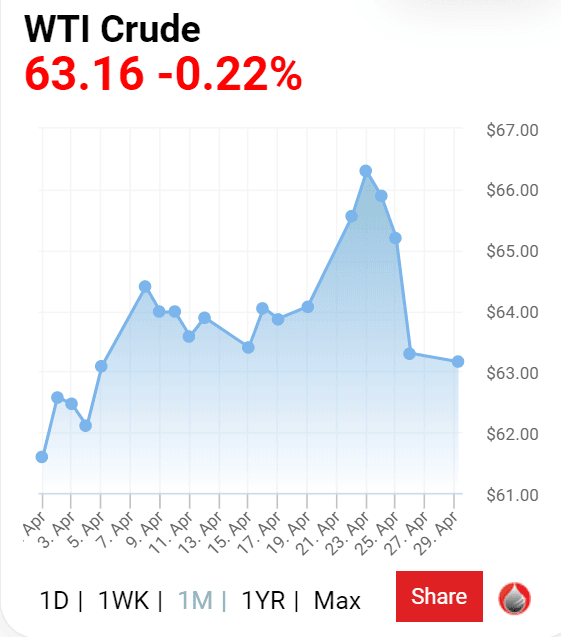 Of course, oil prices could fall if the Saudi’s open their taps to fill the gap left by Iran, however, this is unlikely, says Widdershoven as oil at current or higher prices is at a ‘goldilocks’ level for Saudi Arabia’s economic diversification goals.

“For Saudi Arabia, additional production increases are not needed. The current price and production levels are sufficient to support the ongoing economic diversification plans, stabilising the position of Crown Prince Mohammed bin Salman. Oil market stability has also generated enough positive sentiment in the market that NOCs like Aramco are able to enter the international bond market by force. Low cost financing is an attractive tool for Saudi Arabia and the UAE to boost their economies in the short run,” says Widdershoven.