Inflation data for March has come out softer than markets had expected.

The ONS reports annualised inflation reads at 2.4%, below consensus expectations for a reading of 2.5%. Monthly CPI data read at 0.4%, below the 0.5% forecast.

Importantly for Sterling, core CPI - which strips out volatile factors such as fuel - read at 2.1%, below the 2.2% forecast by analyst.

In all, the data is a negative for the Pound which has given up an healthy gain on the Euro, falling from a daily best at 1.1440 to 1.1396 at the time of writing: 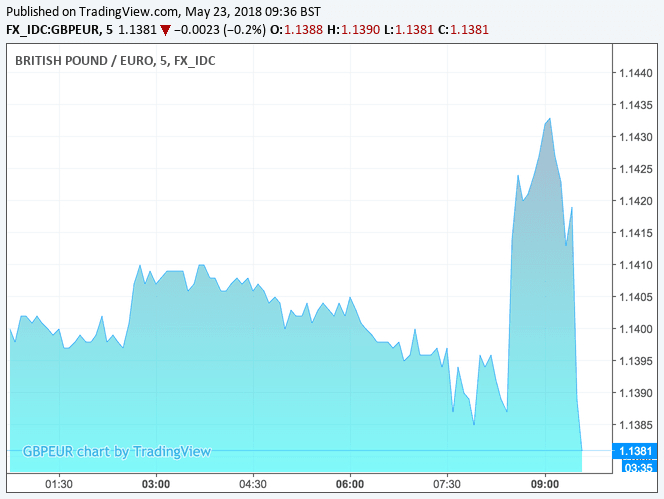 The Pound-to-Dollar exchange rate was already under the cosh of a surging USD, the pair is down to 1.3355 having been as high as 1.3442 ahead of the data release.

The British Pound is once again taking a lead from U.K. economic data prints, and data prints don't come much bigger than the monthly inflation release.

Why? Because the Bank of England has made it clear time and again - most recently via an appearance of policy-setters before Parliament - that it is watching data for guidance as to when next to raise interest rates, and rising interest rates tend to benefit Sterling.

"All eyes are on today’s latest Inflation readings," says Robin Wilkin with Lloyds Bank Commercial Banking. "Governor Carney and co. suggested yesterday they were open to tightening policy, but further evidence from the data is still needed."

The inflation rate has fallen back from a recent high of 2.8% during autumn 2017 resulting in the April 2018 figure being the lowest observed since January 2017. 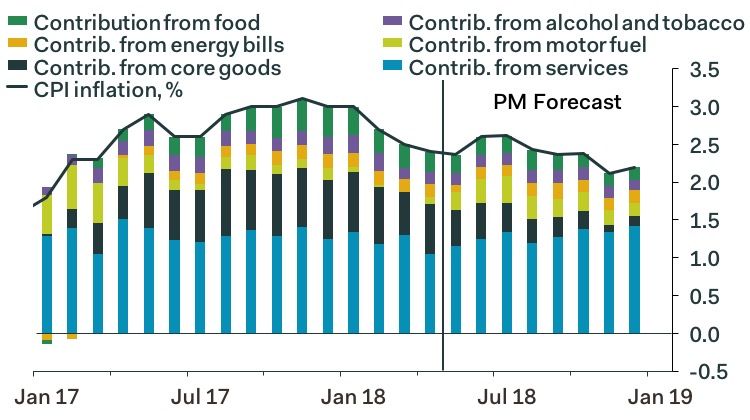 According to the ONS, the largest downward contribution to the change in the rate came from air fares, which were influenced by the timing of Easter.

Rising prices for motor fuels produced the largest, partially offsetting, upward effect. April’s inflation rate actually matches the MPC’s forecast in this month’s Inflation Report, "so it does not reduce the chances of interest rates rising before the end of this year," says Samuel Tombs, Chief U.K. Economist with Pantheon Macroeconomics.

Concerning the outlook for inflation, economist Andrew Sentence, who once served on the Bank of England's Monetary Policy Committee, says while inflation has fallen, it is "likely to rise again in the summer as oil prices surge and Sterling remains weak".

Pantheon's Tombs agrees saying, "inflation probably has hit a floor for now; we see it holding steady in May before jumping to 2.7% in June, as consumers endure rises in motor fuel, electricity and natural gas prices."

If correct, then we would expect the inflation story to become supportive of the currency over coming months, even if it suffers pain in the short-term.

Neil Jones, a trader with Mizuho Bank Ltd. in London says the Pound is lower as it appears to him that the weaker inflation data is "more structural" and not just as a result of the inclement weather seen in at the start of the year.

Added to ongoing Brexit uncertainty, he believes the data points to a scenario whereby the Bank opts to leave interest rates unchanged for a period of time. We reported recently that Jones is actually of the opinion that the next move at the Bank of England might be to cut interest rates, and not raise them.

Such a move would almost certainly see the Pound plumb fresh multi-year lows against the Dollar and Euro.

We are however wary of overplaying the negative impacts of softer inflation, after all, falling prices in the shop brings further relief to consumers and will allow real incomes to start growing again.

We have seen wages start to outpace price rises of late, a scenario that will surely underpin economic activity over coming months.

Kallum Pickering, an economist with Berenberg Bank says falling inflation is "a boon for Brexit-stricken Britain" and "as long as the UK avoids a no-deal hard Brexit – which should prevent a further major fall in the exchange rate – the Brexit-vote related squeeze on real wages is probably over now."

Pickering argues that even though headline inflation has eased in recent months, "underlying trends in demand and supply and tight labour markets point to building inflation pressure over the medium-term."

The British Pound's stock market-inspired recovery faded heading into the mid-week session, amidst ongoing analyst expectations that any strength in the UK currency is likely to be short lived.

A strong rebound in global equity markets over the course of the past 24 hours has allowed the British Pound to stage a recovery against the Euro, U.S. Dollar and other major currencies, but analysts from investment banks such as Goldman Sachs, CBA and TD Securities are sceptical the recovery will last.