- But the boost to real income from falling inflation could keep GBP weakness limited.

The Pound pared back earlier gains over a basket of developed world currencies Tuesday after Office for National Statistics data showed UK inflation falling faster than was expected in February.

Headline inflation slid to 2.7% for the February month, down from 3% in January, when markets had been looking for a more modest decline to 2.8%

Core inflation also fell further than was expected, dropping to 2.4%, down from the 2.7% seen in January and below the consensus forecast for a reading of 2.5%. This removes volatile commodity goods like food and energy from the price basket so is seen as a better representation of domestically generated inflation pressures.

"The Pound is suffering under the weight of a decline in inflation data & taming of Bank of England expectations for Thursday as a result," says Neil Jones, an analyst at Mizuho Bank, referencing the importance of inflation to decision making at the Bank of England who will brief markets on their thinking on Thursday.

A slower than expected rise in food and transport prices were the main drivers behind the move, although a fall in prices of fuel and accommodation services also played a role, according to the Office for National Statistics.

"CPI inflation is now at its lowest since July last year, with the latest dip being driven by lower fuel prices, as well as the continued fading of sterling’s post-referendum slide," remarks Paul Hollingsworth, a senior UK economist at Capital Economics. "The fall-back in CPI inflation in February from 3% in January to 2.7% confirms that we have now reached a turning point, but doesn’t diminish the case for a near-term interest rate hike." 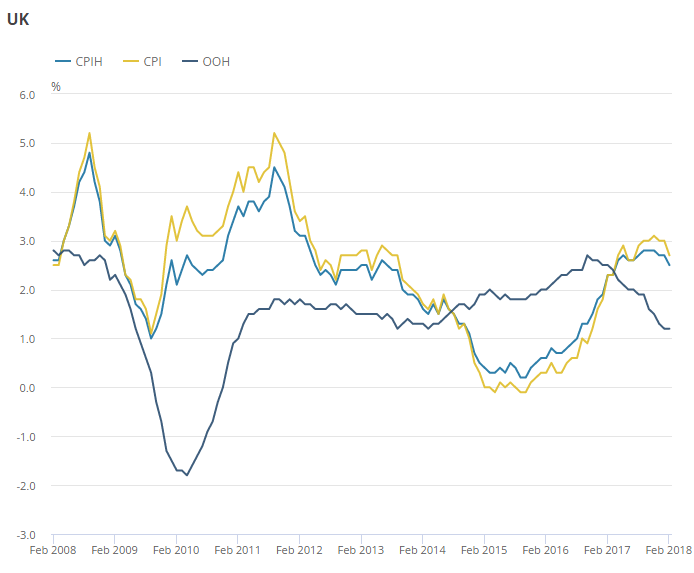 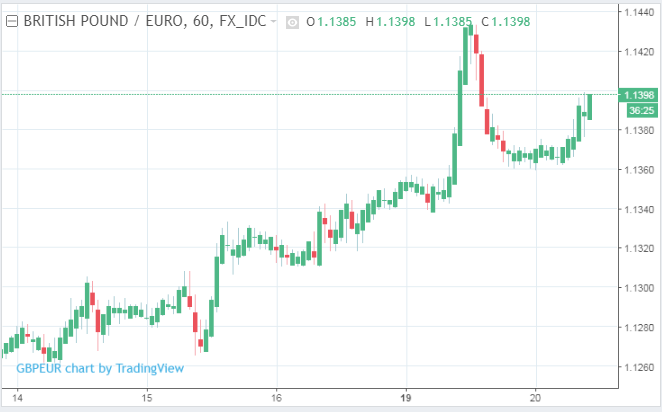 The Pound also eased back against the rest of the G10 basket. Notably, Sterling’s 0.65% gain over the Japanese Yen was cut in half to 0.30%, leaving the exchange rate trading at 149.23. 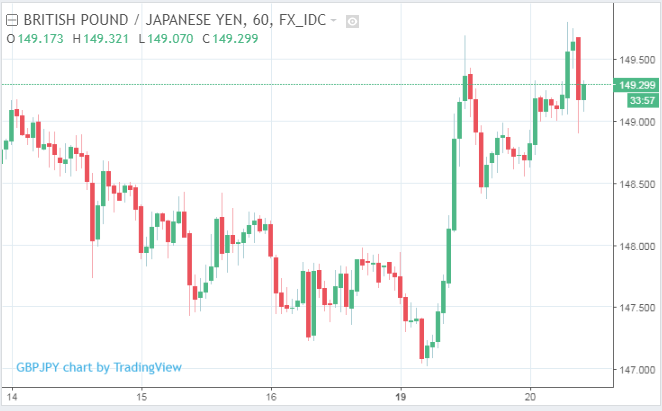 Above: GBP/JPY rate at hourly intervals.

Tuesday’s data is crucial for markets because it is the recent high levels of UK inflation that have spurred the Bank of England into action and led markets to expect another rate rise as soon as May. Interest rates are expected to become more of a driver for the Pound now that Brexit headlines are likely to fade into the background following the March 19 deal on transition.

The BoE raised its interest rate for the first time in a decade back in November and warned in February of more to come if the inflation outlook evolves in line with its latest set of forecasts.

It projects the consumer price index will remain above the 2% target until at least the end of the first quarter 2021 however, Tuesday’s numbers appear to have called these forecasts into question somewhat, which poses questions about how agressive the BoE can be on rates.

As the £ gets stronger - the genie in the bottle - called inflation - seems to be dissipating in terms of threat- need wage inflation to bounce to give MPC a real reason to raise rates!

"While CPI inflation was below the Monetary Policy Committee’s forecast of 2.9%, we don’t think that this significantly reduces the chance of an interest rate hike in May," Hollingsworth says.

This move came largely in response to the double digit referendum-induced devaluation of Sterling, which raised the cost of imported goods for companies and consumers.

However, with the Pound having reached its lowest ebb in October 2016, the fall is now expected to drop out of the prior year base numbers - leading economists to predict inflation will fall in 2018.

That said, the Bank of England will announce its latest interest rate decision Thursday. Alongside this, it will publish a monologue of thoughts on the economy and the outlook for inflation and monetary policy.

Should the BoE place greater emphasis on recent signs that wages are rising, rather than focusing on current changes in consumer prices, markets would have reason for cheer as this would be a clear signal the Bank intends to continue raising rates.

"The MPC has focused more on wage growth recently, and tomorrow’s figures are likely to reveal another pick-up. As a result, we still think that the MPC will raise interest rates again at its meeting in May," Hollingsworth concludes.

It could be argued that Sterling should be a lot lower based on the data, but falling inflation will also boost the spending power of UK consumers. It could therefore be stimulatory for the economy down the line. So could it be that Sterling is focussing on the positives?

A drop in UK inflation to 2.7% and rising wages means the real pay squeeze is coming to an end (see chart). Households are already feeling less gloomy https://t.co/rXyiXxQIuc pic.twitter.com/3Up1xRxybb

With that in mind, what is likely to matter for the Pound on the data front this week are wage data. The the Office for National Statistics will release its latest volley of UK labour market data Wednesday, which will include the most up-to-date measure of wage growth for UK households.

These figures will be key to expectations for interest rates going into the BoE's announcement Thursday and over coming months.

Markets are looking for pay packets to have risen by close to 2.6% on an annualised basis during the three months to the end of January, up from 2.5% previously. More timely data have suggested an even sharper pick up could be in prospect during the months ahead.

The British Pound's stock market-inspired recovery faded heading into the mid-week session, amidst ongoing analyst expectations that any strength in the UK currency is likely to be short lived.

A strong rebound in global equity markets over the course of the past 24 hours has allowed the British Pound to stage a recovery against the Euro, U.S. Dollar and other major currencies, but analysts from investment banks such as Goldman Sachs, CBA and TD Securities are sceptical the recovery will last.