The British Pound was stronger against the Euro and steady against the U.S. Dollar at the start of a new week that sees positive news on the UK's fiscal front, as well as the creation of a fresh facility at the Bank of England to ensure domestic money markets remain stable.

The Treasury announced it is bringing forward a crucial fiscal policy update and the publication of independent economic forecasts to October 31 in an effort to reassure markets that the government's economic agenda is sound.

The Medium-Term Fiscal Plan was initially scheduled for November 23, meaning market uncertainty over the outlook for UK finances would likely remain elevated for an extended period of time.

The Treasury said an economic and fiscal forecast from the independent Office for Budget Responsibility will also be published alongside the Medium-Term Fiscal Plan.

"That the Budget/OBR forecasts have been brought forward to 31/10 does lower uncertainty over Gilt issuance. However getting Cabinet agreement on spending cuts & credibility of moving out medium-term fiscal rule to 5Y make this a delicate judgement," says economist Simon French at Panmure Gordon.

The Pound to Euro exchange rate was seen higher on the day by a third of a percent at 1.14 in the wake of the announcement from the Treasury, the Pound to Dollar rate was unchanged at 1.1045.

The Bank of England meanwhile announced Monday it would double the size - from £5BN to £10BN - of its daily emergency auction facility that sees it buy long-dated govt bonds, with just five days to go before it closes the facility.

It has also launched a new facility that will provide the banking sector with the liquidity its pension clients might need in the future.

"Sensible for BoE to expand repo operations & enlargen the Gilt operations daily envelope given uncertainty over this Friday's roll-off. Still some considerable cliff edges to overcome - with active QT due to start on 31 Oct potentially the most challenging," says economist Simon French at Panmure Gordon.

The message is therefore clear: the Bank is alert to signs of stress in the market and will respond, which should allay investor fears with regard to the safety of UK assets.

"BoE announces additional measures to provide a backstop to UK pension funds & gilt markets. They're happy to buy more this week before temporary bond-buying ends. Plus new facilities that'll serve as a backstop to LDIs after this week. Whatever it takes to avoid a GBP crisis," says Viraj Patel, Macro Strategist at Vanda Research. 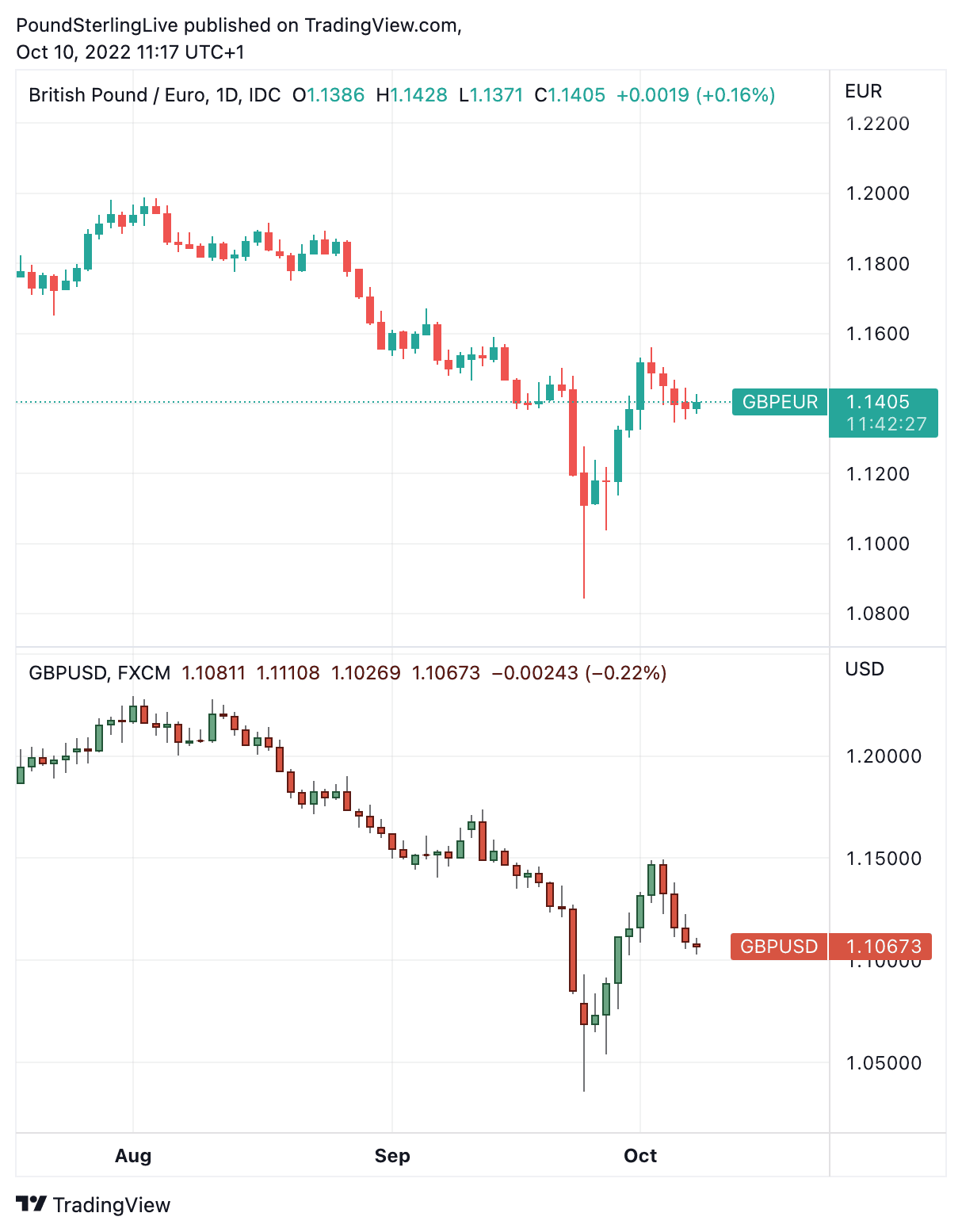 The Pound came under significant pressure in late September amidst a collapse in UK bonds - which sent bond yields surging higher - following the government's 'mini budget'.

Some pension funds were particularly exposed to this surge in yields, but the Bank of England acted as a backstop to the market, buying long-term government bonds and bringing their yields lower again.

The Pound fell sharply alongside bonds but it too stabilised following the Bank of England intervention. The Pound-Dollar exchange rate slumped to 1.0345 before stabilising back to pre-mini budget levels last week.

"Sterling briefly staged a surprising rally back to 1.15 following the BoE’s intervention in the Gilt market," says Michael Cahill, a foreign exchange analyst at Goldman Sachs. "We think that the disruptions in UK pension plans has led to some significant but temporary repatriation back to the UK in order to raise capital."

To be sure, the Bank is not trying to stop the appreciation of UK bond yields, but it is signalling it is not willing to entertain disorderly market conditions.

"Credit to BoE for stepping up and, just about, staying the right side of the line. There are a lot of moving parts (Budget/ Active QT/ MPC policy meeting) between now and 10th November when the extended Repo facility window ends. This facility tries to smooth any resultant volatility," says French.

It is in disorderly markets that the Pound is particularly exposed to extraordinary market movements and heightened volatility.

The announcement of an increase in the daily amount set aside for bond purchases by the Bank of England on Monday comes despite the Bank only tapping a fraction of the facility (£5BN of £40BN has been utilised).

"The Bank is prepared to deploy this unused capacity to increase the maximum size of the remaining five auctions above the current level of up to £5bn in each auction," said the Bank in a statement.

This says the market is working, but the Bank is potentially wary of market disorder in the run-up to the ending of the programme on Friday.

The message it is sending, therefore, is that it will utilise significant firepower to counter such instability.