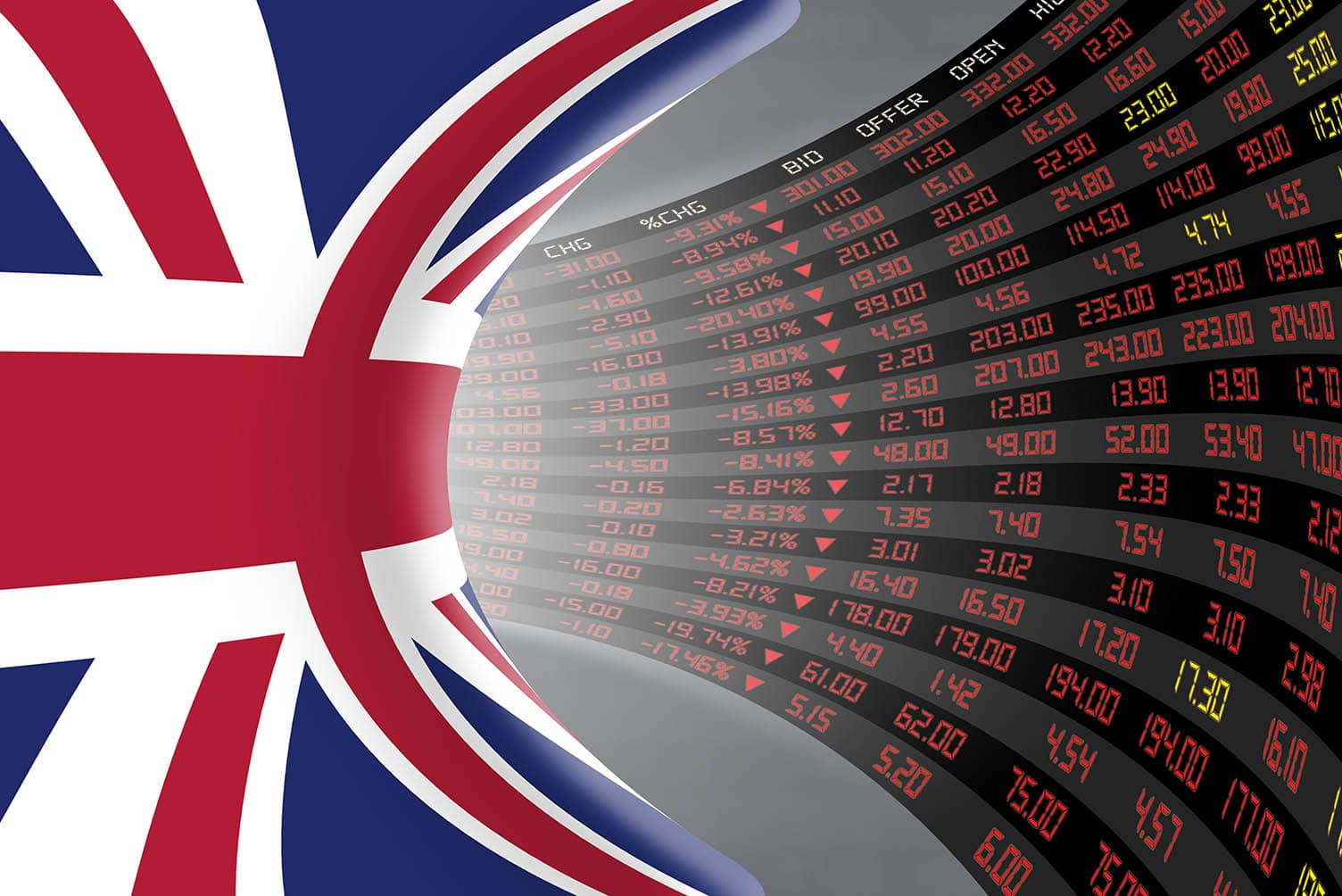 Headline grabbing wage and inflation data out of the UK this week has had an impact on the British Pound, however it could be global investor sentiment that is arguably proving more decisive and a bear market could prompt further declines.

Sterling rose against the Euro and Dollar in the first half of the week when global stock markets were ascendent but a turnaround in sentiment midweek coincided with a paring of those gains, confirming the global macro backdrop has a strong hold of the UK currency.

As the below chart shows the Pound has a strong positive relationship with the FTSE 100, which is in turn trading more or less in synch with its global peers meaning the FTSE 100 could be substituted for Germany's DAX or the U.S. S&P 500. 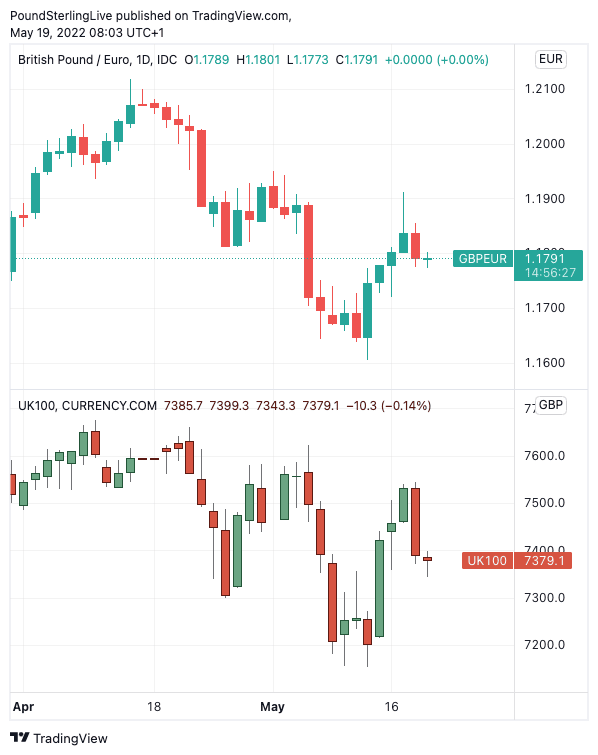 Above: Direction in the FTSE 100 offers a good explainer for the Pound to Euro exchange rate's movement.

"The U.S. equity market lost further ground overnight as investors took fright at dire results from the retail sector, and on fears that rising inflation and higher interest rates might well tip the country into recession. It is unlikely that European markets will dodge the fall-out from this price action," says Bill McNamara, head of The Technical Trader.

"It was results from retailer Target, who revealed that quarterly profits had halved as a result of rising costs, and as it warned of more of the same going forward: its shares slumped to a loss of almost 25% and the impact of the slide was felt across the whole market," he adds.

Market falls suffered on Wednesday coincide with a failure in a rally in the Pound to Euro exchange rate and sentiment on Thursday is meanwhile not looking supportive at the time of writing.

"For some time sterling has been a bellwether of risk appetite which, given the small, open nature of the economy and the prominence of the UK's financial sector, is understandable," says Thomas Flury, a Strategist at UBS' Chief Investment Office.

Near-term direction for Pound exchange rates could therefore depend on what comes next for global markets.

"Global equities are in the midst of a bear market that is not yet finished," says Michael J. Wilson, Chief U.S. Equity Strategist at Morgan Stanley. "Macro and earnings data points continue to soften as global economies move toward later-cycle phases."

A continuation of a stock market selloff is likely to be consistent with further losses in Sterling, particularly against the U.S. Dollar which is a strong outperformer when equity positions are liquidated back into cash.

“That stocks can’t even manage a decent rebound after their heavy losses should tell investors that we are not in the bull market of 2021 any more," says Chris Beauchamp, chief market analyst at IG.

"Investors seem to have taken counsel of their fears once again, fretting about inflation and a recession in parts of the global economy," he adds.

Any gains by both stock markets and the Pound can currently be considered as relief rallies, where a rebound occurs from oversold conditions but is then ultimately resold. (Set your FX rate alert here).

"While it was expected that this bounce would be short-lived, the rapidity with which it has unravelled will mean that even more investors will start heading for the exits," says Beauchamp.

A key concern for markets at present is the expected tightening of monetary conditions in the U.S. now that the Federal Reserve is engaged in a rate hiking cycle, with 50 basis point hikes expected at the next three policy meetings.

This raises the cost of borrowing not only in the U.S. but also across the global economy. 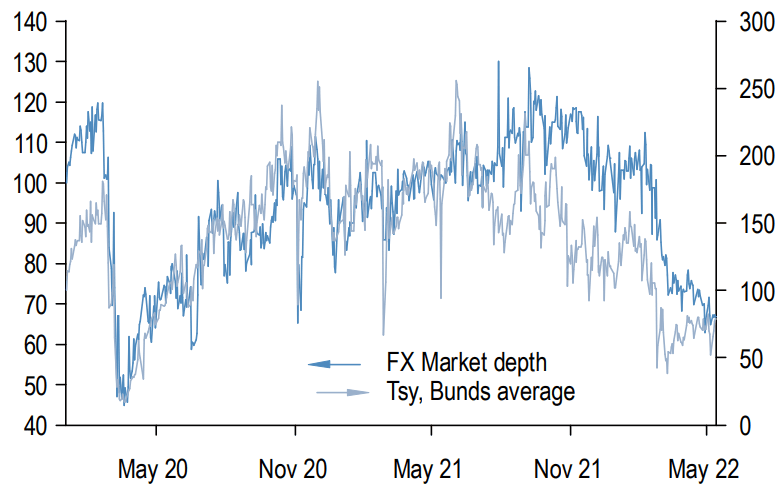 Above: "Market depth has plumbed across macro markets Market depth*; indexed at 100" - JP Morgan. * Size of the top 5 bid and offer levels of the order book; averaged for 5 minute snapshots for a 2-hour liquid window by pair. + Market depth is the sum of the three bids and offers by queue position, averaged between 8:30 and 10:30am daily Source: J.P. Morgan, External venues.

Despite growth fears the Fed is meanwhile unwilling to veer from its aggressive rate hike stance in view of hot U.S. inflation and up to 200 points of further rate hikes are anticipated by the market for the remainder of 2022.

"We have now reached a point where the market has moved to price rates around 2.75% (near or even potentially at neutral) by the end of the year," says Themistoklis Fiotakis, an analyst at Barclays. "It is clear that the tightening pace priced has been difficult for credit and equity markets to tolerate and sustain".

Covid lockdowns in China have meanwhile stalled the world's economic growth engine, a situation only exacerbated by the war in Ukraine.

"This dollar strength is not a technical overshoot. It has been driven by new emerging macro shocks from China and from Europe/Russia," says Fiotakis.

When will the Tide Turn for the Pound?

If risk sentiment is to remain in charge of Sterling, which looks very likely given the currency's recent history, the key question becomes when will markets reach their nadir and begin recovering once more?

Morgan Stanley expects the current risk-off phase to come to an end around the third quarter of 2022, saying by then central bank rate hike expectations will have peaked alongside inflation.

Asian Covid lockdowns will have eased and recession fears will have peaked.

But analysts at Barclays say a return to typically Sterling supportive global conditions could take up to a year. 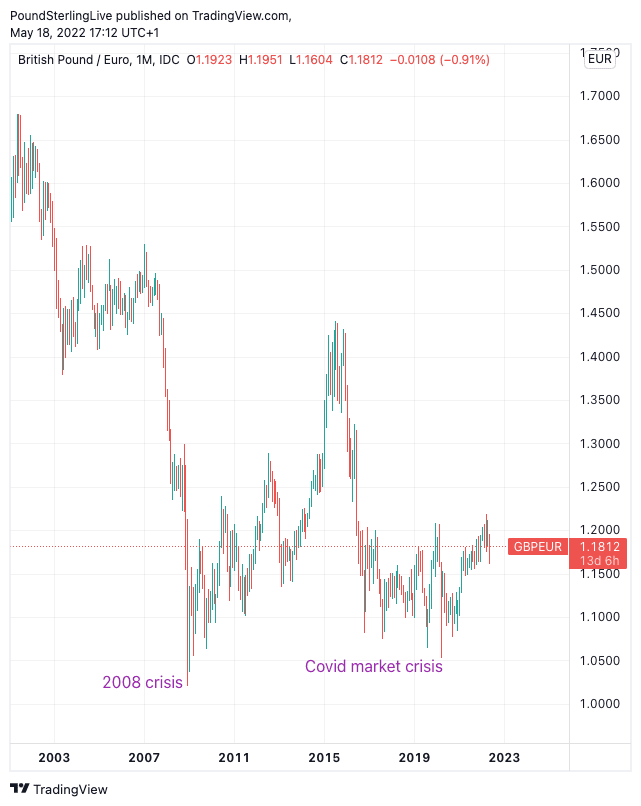 Above: Risk matters for the Pound, the all-time lows for Pound-Euro came during bouts of extreme global risk aversion.

However Stephen Gallagher, Head of Research for the Americas at Société Générale in New York, is more optimistic, particularly on the U.S. economic outlook.

"One day, a recession will come, but the current evidence points to upside not downside," says Gallagher.

Soc Gen update their forecasting models daily and are yet to find cause for alarm as incoming data remain positive, none more so than the strong retail sales figures out on May 17.

April retail sales rose 0.9% and economists suggested the figures show little sign the U.S. consumer is bowing in the face of surging inflation, instead opting to continue running down savings accrued during the pandemic.

"This is not yet evidence of demand destruction. These are substantial gains for an economy with a 3.6% unemployment rate," says Gallagher who also notes the non-farm payroll measure of employment posted a 428k gain in April while industrial production posted a 1.1% month-on-month gain.

"In time, amid Fed rate hikes, peaking inflation and rising wage pressures (pressuring margins), recession probabilities should rise. The question is when. For now, the Fed believes the economy is resilient to further rate hikes. We concur," he adds.