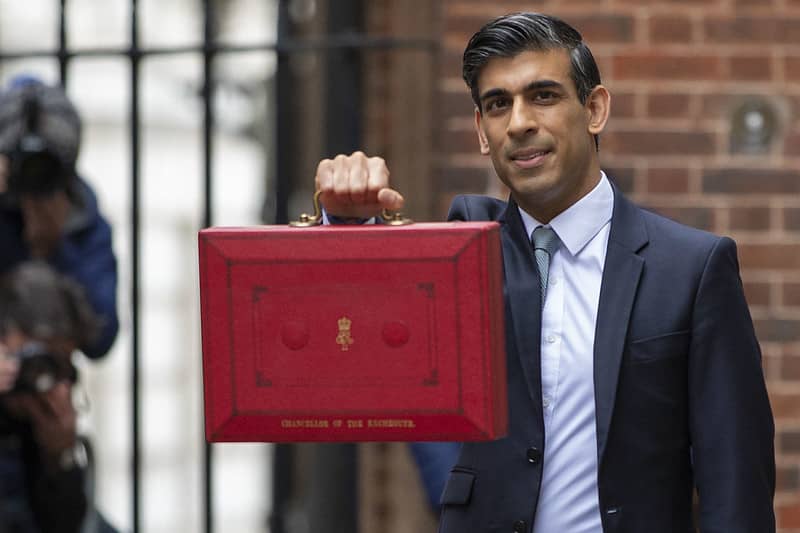 Above: The Chancellor Rishi Sunak, alongside his ministerial team, poses for the media with the traditional red budget box outside 11 Downing Street. Image (C) Gov.uk.

The British Pound is softer right across the board on October 27 in sympathy with a fall in the yield paid on long-duration UK government bonds, which could be linked to expectations for lower government borrowing requirements in coming years.

The cost of financing government bonds fell into and in the wake of the budget: the yield on UK 10-year government bond yield dropped 10 basis points to 1.003%.

This is the biggest one-day fall since March 2020 and is linked to a combination of falling inflation expectations and a belief the UK government will not be required to issue as much debt as previously expected.

A lower supply of bonds issued to fund borrowing implies higher bond prices, all being equal, as investors chase a limited supply.

Given yields move in the opposite direction to bond prices the net result is lower bond yields. 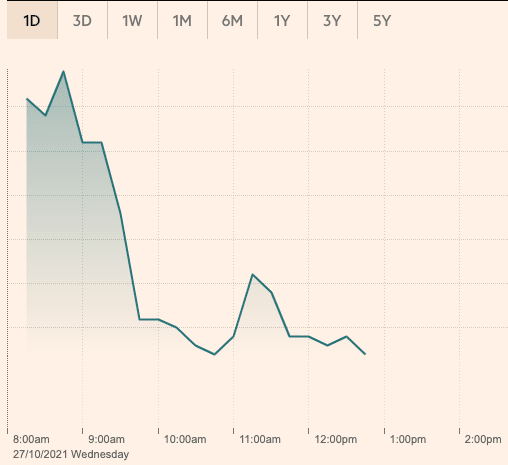 Above: The yield paid on ten year government bonds has fallen on Oct. 27. Image courtesy of FT.com

Therefore, the fall in UK ten-year yields deprives the Pound of a bid.

(Keep in mind we are approaching month-end while next week sees a pivotal Bank of England policy announcement. There could be a lot of noise to navigate in the market today and over coming days.) 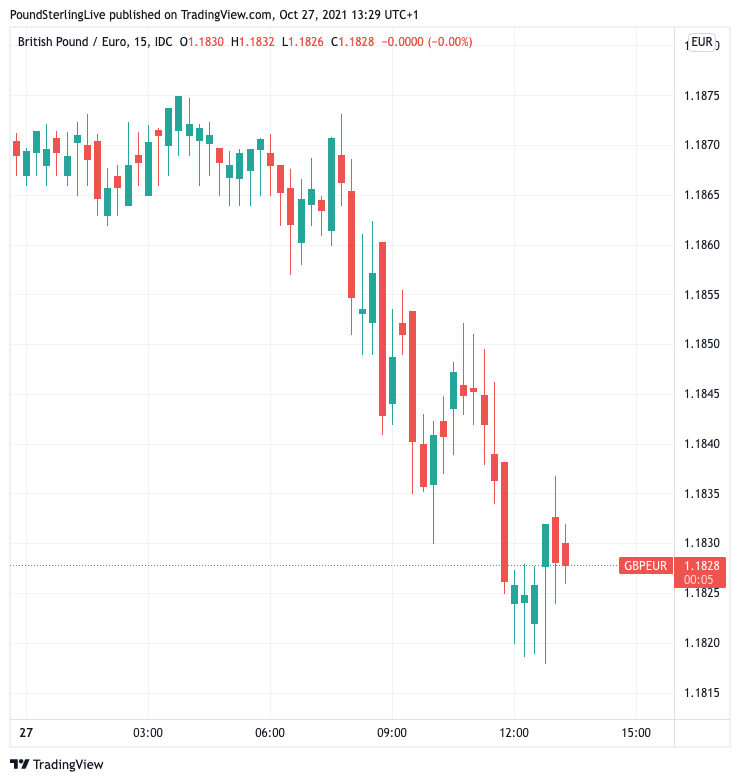 Above: GBP sells off into the 12:30 budget statement.

Complicating matters somewhat is an observation that the yield on long-term UK bonds was already falling ahead of the budget, therefore to what extend this event can be blamed on today's moves is unclear.

Nevertheless, a shortage of longer-dated bonds in coming years cannot be ignored given Chancellor of the Exchequer Rishi Sunak said he had devised two new fiscal rules in order to maintain fiscal discipline:

1. Public sector debt must be falling as % of GDP

2. The state will only borrow to invest

Therefore, the books must be balanced for every day spending and investors see the potential for a more limited issuance of debt by the Treasury.

In normal times, the state should only invest for future growth and prosperity, with everyday spending met by taxation, said Sunak. 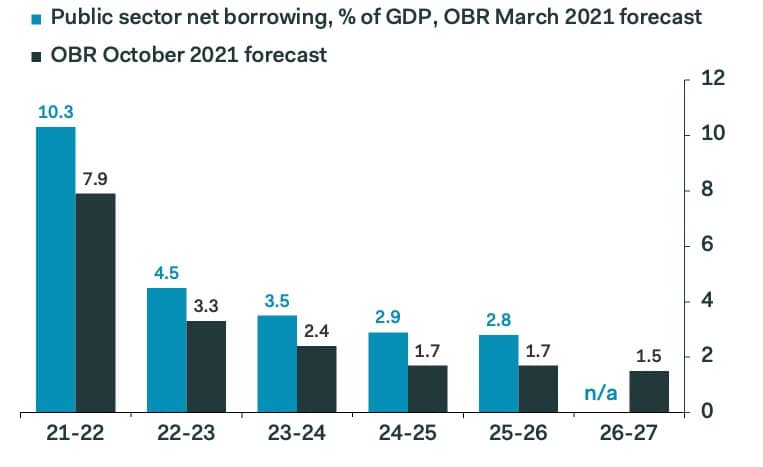 Below are the government's latest borrowing projections:

"Borrowing is below 2% from 2023-24 onwards. Implies a current budget surplus of c.1% in 2024-25, meeting his main fiscal target with ample headroom. Suggests no major giveaways today, but some scope for pre-election tax cuts," says Samuel Tombs, UK Economist at Pantheon Macroeconomics.

The Office for Budget Responsibility (OBR) - the independent body that furnishes the Treasury with economic forecasts from which decisions can be made - expects the UK economic recovery to be quicker than they thought back in March.

The economy is forecast to expand 6% in 2022 and unemployment is anticipated to peak at 5.2%.

"The OBR handed Rishi Sunak a significant upgrade to its forecasts for the public finances but, while the Chancellor spent some of the windfall a substantial amount was saved – allowing the Chancellor to start building a war chest that could be deployed ahead of the next election," says Neil Shearing, Group Chief Economist at Capital Economics. 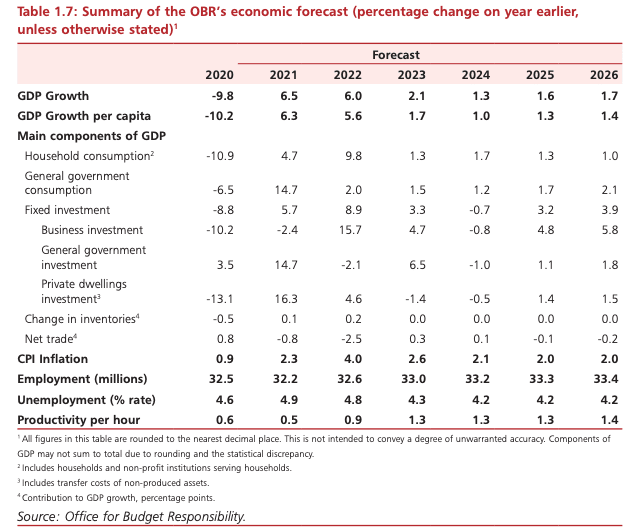 The OBR assumes the structural hole blown in then UK economy by the economic crisis will amount to 2.0% of GDP, this is down on the 3% hit forecast in March.

This implies better growth and borrowing projections over coming years.

By comparison the 2008/09 crisis delivered a 10% permanent hit to the economy.

The OBR now expects the UK economy to return to its pre-pandemic size by the new year - significantly sooner than previously feared.

Looking at the details, an expected raise to the minimum wage was announced while the pay cap on public sector pay was also lifted.

What was unexpected was an 8% cut to the Universal Credit 'taper rate', meaning around two million families will keep on average an extra £1000 pounds a year.

All should be supportive of consumer confidence which is an engine of UK economic growth.

There was also a warm reception to the decision to increase research and development spend (R&D) to £20BN by 2024-2025.

"We also warmly welcome the news that this funding will be delivered in steady increases and not backloaded towards the end of settlement," says Dr Joe Marshall, Chief Executive of the National Centre for Universities and Business.

"The Government’s commitment to innovation will be a central cog to the UK’s prospects to leading in the industries of the future. This will be essential to be globally competitive so the Government must stick to these targets in the coming years," says Tony Danker, CBI Director-General.

However Danker had some criticism for Sunak's timid approach to reforming the country's business rates system.

He says a "hard truth is that wholesale reform to unlock investment was rejected today.

"The Government missed the opportunity to truly reform a business rates system that diminishes Britain’s high streets and factories."