A global stock market sell-off hints at a deterioration in investor sentiment, the effect of which is being reflected on foreign exchange markets where the British Pound is losing value against some of its major peers.

Investors were paring exposure to stocks, commodities and 'risk on' assets amidst "more unease over the outlook for global growth," says Lee Hardman, Currency Analyst at MUFG.

The FTSE 100 index was down by over a percent, Germany's Dax 0.80% and Dow Jones futures were lower by two-thirds of a percent.

The foreign exchange market response saw 'safe havens' such as the Yen, Franc and Dollar bought as would typically be expected.

The laggards were those highly sensitive to global sentiment, including the Australian, New Zealand and Canadian Dollars.

"The US dollar has continued to trade on a stronger footing overnight especially against the G10 commodity-related currencies of the Australian dollar, Canadian dollar, New Zealand dollar and Norwegian krone," says Hardman.

Straddling the centre ground of this risk matrix is the Pound which lost ground against the safe havens but gained against the 'high beta' commodity dollars and emerging market currencies. 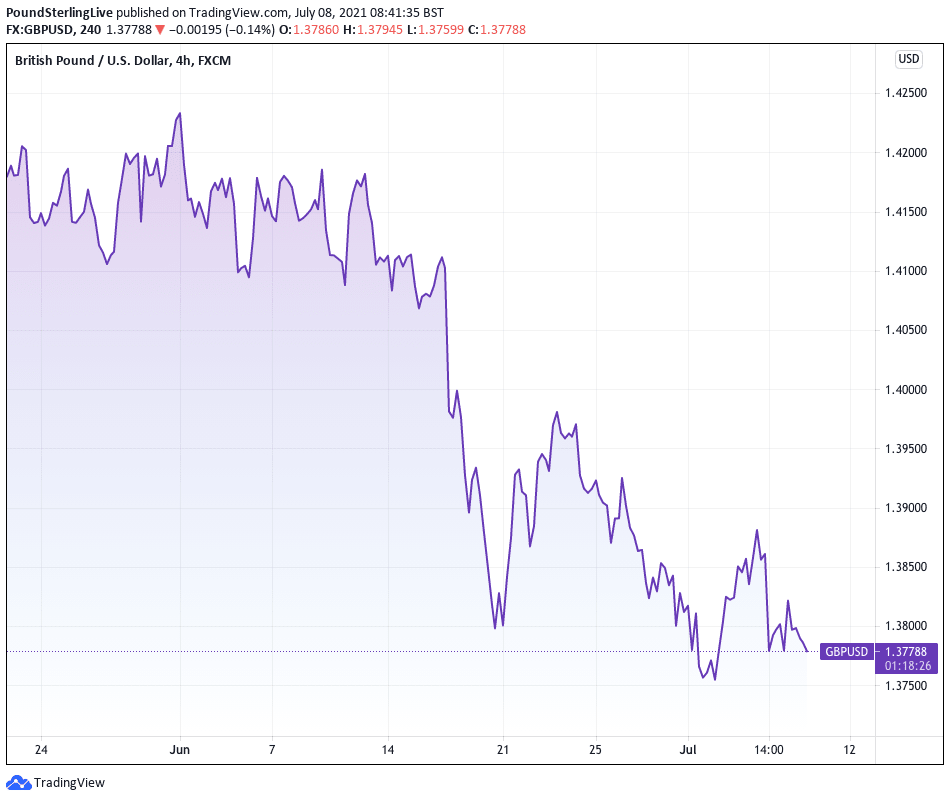 "Market participants’ optimism over a robust global recover is currently being tested by the ongoing spread of the new Delta COVID variant which has the potential to disrupt economic activity especially in countries where the vaccine roll out has been slow," says Hardman.

The analyst adds economic indicators are starting to signal that the peak pace of economic recovery in the U.S. and China which have been leading the global recovery has already passed, and growth momentum is starting to slow.

"China’s economy has already been slowing throughout the first half of this year, while it looks like Q2 will be the best quarter of growth for the US economy," says Hardman.

Underpinning investor concerns is the apparent shift by the U.S. Federal Reserve - albeit a slow one - towards tightening monetary conditions in the U.S.

The Fed released the minutes of their June policy meeting overnight and they confirmed to markets that an interest rate rise was likely by as soon as 2022.

The minutes also confirmed that discussions were underway to end the quantitative easing programme that sees the Fed increase the supply of liquidity in the economy by purchasing government and corporate bonds.

"We expect the US dollar to remain bid in the near-term while market participants remain more concerned over the global growth outlook even as US yields have dropped back sharply recently," he adds.

Those looking for a stronger British Pound against the Euro and U.S. Dollar and associated 'safe haven' currencies will ultimately have to ride out the current market nerves. However transacting into the Australian Dollar, New Zealand Dollar and Canadian Dollar could now become cheaper.

"My suspicion is that this latest move is being driven by the virus. The new delta variant is getting really worrisome, says Marshall Gittler, Head of Investment Research at BDSwiss Holding Ltd.

Gittler reflects that market concern about the virus can be seen in the relative performance of sectors that benefit from reopening the economy, such as airlines and hotels.

"Continued deleveraging across markets, led by oil and rates and spilling over into FX, despite overall stability in equities," says a trader at JP Morgan's London spot trading desk.

"I guess with worries around supply issues and the delta variant, maybe that summer boom people expect from growth is dampened or delayed," adds the trader.