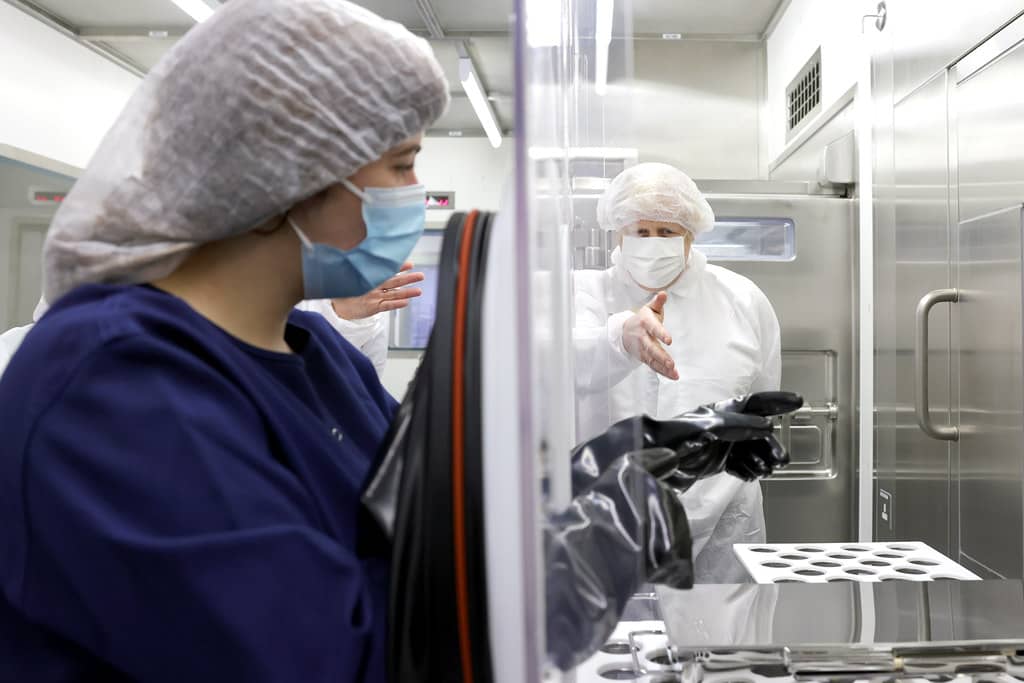 This will be a key week in determining whether or not the UK is released from all Covid-19 restrictions on June 21, an outcome that will likely have implications for how the British Pound trades near-term.

A week ago we reported that the variant was unlikely to alter the country's roadmap out of lockdown and on this count the balance of probabilities lied with further gains in the Pound.

But fast forward a few days and there is a palpable increase in caution coming out of the Government as to whether or not the UK will fully unlock, which some analysts say could pose a headwind to further gains in the Pound.

The government and its medical advisors have said they are eyeing developments concerning the spread of a variant first identified in India that has pushed case loads sharply higher in some areas of the UK, saying the spread could mean the final unlocking is delayed.

"The recent news on the pandemic front has not be all that positive," says Valentin Marinov, Head of G10 FX Strategy at Crédit Agricole. "Worries are mounting that the rapid spreading of the Indian Covid variant in particular may scupper the government plans to fully re-open the economy next month."

The Pound-to-Euro exchange rate trades at 1.1639 at the time of publication on June 01, the Pound-to-Dollar is meanwhile looking through any concerns regarding reopening and has hit a new three-year high at 1.4225: 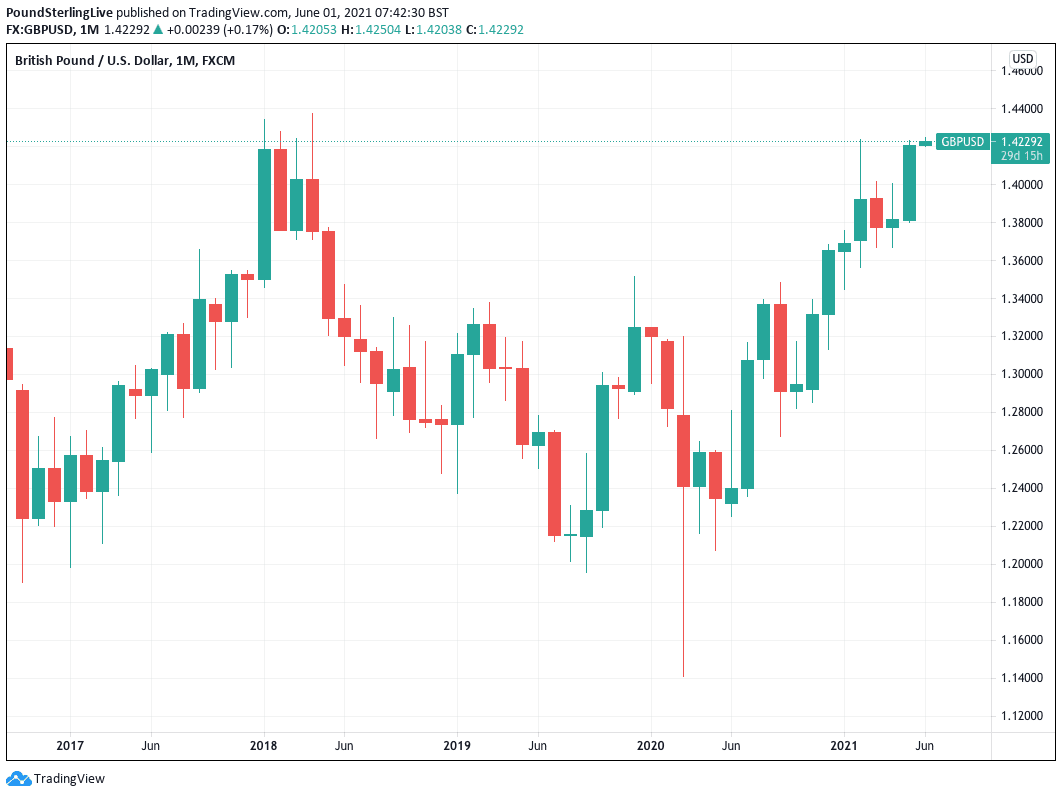 The key to whether the June 21 unlock goes ahead is whether that variant is spreading across the country and pushing cases up sharply and whether this is in turn resulting in a rapid increase in hospitalisations in those areas.

The latest statistics suggest Covid-19 cases are starting to rise sharply, however hospitalisations and deaths are not, presenting something of a conundrum that lead a government source to say at the weekend that they are waiting on further data before making a call on relaxing restrictions further.

A leading scientific adviser to the Government has repeated calls to delay the June 21 lifting of restrictions by "a few weeks", warning the coronavirus's ability to adapt in the face of vaccines has still left the UK in a vulnerable position.

Professor Ravi Gupta, a member of the New and Emerging Respiratory Virus Threats Advisory Group (Nervtag), told ITV on Tuesday the increased socialisation which has followed last month's phase of restriction lifting could be expected to lead to "quite a lot" of hospital admissions.

He said while the nation had performed "amazingly well" in its vaccination programme, it was still too early "to put the vaccine straight up against the virus".

"News that the full re-opening of the UK economy in June is 'in the balance' may hold GBP back temporarily," says Chris Turner, Global Head of Markets and Regional Head of Research for UK & CEE at ING Bank.

Caution comes at the back of what has been a relatively constructive month for Sterling bulls, with the Pound-to-Euro exchange rate (GBP/EUR) having advanced 1.25% in May in an attempt to put April's 2.22% decline firmly in the rearview mirror.

The Pound-to-Dollar exchange rate (GBP/USD) has meanwhile advanced a more substantial 2.65% in May, as it adds to a more modest 0.30% gain in April.

The faster-spreading strain is now dominant in England and responsible for up to three quarters of known coronavirus cases, official data shows.

Boris Johnson said on Thursday May 27 that people would need to "wait a little bit longer" as to whether the roadmap will be met, with the coming week due to deliver data crucial to understanding how the pandemic was progressing.

The Times reports that health officials are pushing for as much time as possible to analyse conflicting data.

At the current time while hospitalisations in Bolton - seen as the epicentre of the latest outbreak - have started to rise it does appear that they are at manageable levels given case rates in older and more vulnerable citizens remain relatively flat.

That the younger age groups account for most infections is testament to the vaccines working and would therefore offer the government some confidence.

Indeed, research out in late May suggested the UK's existing suite of vaccines will work against the variant.

But politics and optics will also likely play a role in the decision to fully unlock owing to the intense scrutiny the UK government has come under over recent days concerning how it has handled such decisions in the past.

The government is coming under sustained political pressure - particularly from the media - over its handling of the early stages of the pandemic, following testimony to MPs by Prime Minister Boris Johnson's former senior advisor Dominic Cummings.

There is therefore the potential for the government to adopt an overtly cautious approach to June 21 in light of the uncomfortable pressure coming from journalists.

Any delay might be seen by markets as negative for the Pound in the short-term as it could crimp business and consumer confidence while delaying the ability of the economy to recover to full potential.

"Given that these fears have coincided with a growing public scrutiny of the official response to the Covid pandemic, they could play out as a GBP negative vs the USD and the EUR in the near-term," says Marinov.

The Pound rallied ahead of the weekend after Gertjan Vlieghe - a policy maker at the Bank of England (BoE) - said an early interest rate hike is possible if there is smooth transition of workers off furlough and into employment.

Vlieghe said in a speech to the University of Bath that he expects the first rate rise to occur "well into next year" as workers coming off the government's furlough scheme might push up unemployment.

But he noted there were upside risks that "should the transition out of furlough happen more smoothly, with the unemployment rate at or a little below current levels by the end of the year, with associated signs of upward inflation and wage pressure beyond the temporary and base effects, then a somewhat earlier rise in Bank Rate would be appropriate."

Vlieghe's comments are significant in that he is considered a 'dovish' member of the MPC, in that he tends to be cautious on raising interests rates and would like to see solid signs that inflation and employment are recovering before raising rates.

The market entered the day pricing in a first interest rate rise in late 2022, however the comments from Vlieghe might prompt this timing to come forward.

This is a typically supportive development for the Pound.

Despite the gains the Pound still remains comfortably within its short-term ranges and investors will be looking for some follow-through action over coming days for signs the currency is refinding that form it enjoyed in the first quarter.

"The quid seems to have got rather over-excited about a heavily caveated set of remarks from Vlieghe," says Michael Brown, Senior Market Analyst at CaxtonFX.

Trade in the Pound has been relatively uninspiring of late, but to be fair this has been the case for wider currency market as most major exchange rates have traded tight ranges over recent weeks.

Therefore expecting the Vlieghe comments to deliver sustained gains from here could be considered somewhat optimistic.

"With many positives in the price of the pound already, we maintain our neutral to slightly bearish outlook for the GBP in the very near-term," says Marinov.