UK inflation rose by a greater margin than analysts had been expecting, but the rise was by no means surprising enough to warrant a major reconsideration of how the Bank of England might shift its views on interest rates.

UK CPI rose 0.6% month-on-month in April, which is in line with the market's expectation but is a doubling of the March print at 0.3%.

CPI inflation for April rose 1.5% on a year-on-year basis says the ONS, a tick above the 1.4% the market was expecting and more than doubling the 0.7% print recorded in March.

The currency has however since recovered some of those knee-jerk losses. 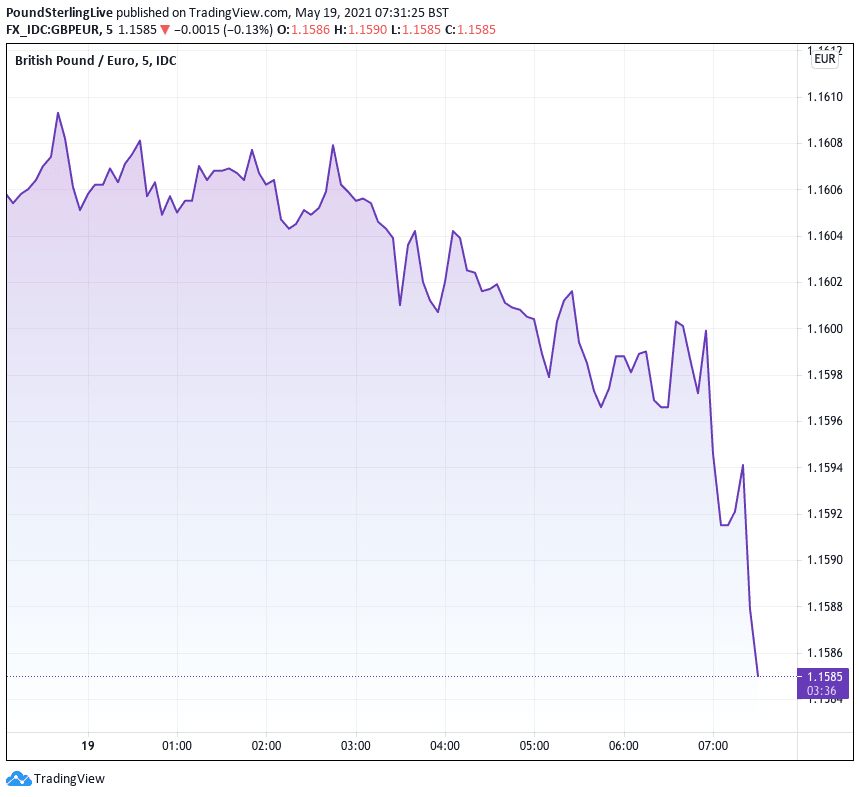 The sharp rise in inflation is understandable considering this month's data is being compared against the sharp fall recorded one year ago, a time when the global economy was slowing sharply in the face of the Covid-19 onslaught.

This phenomenon is known as a 'base effect'.

The ONS says rising commodity-based costs are contributing to the increase in price pressures, a view already held by Bank of England Governor Andrew Bailey.

Bailey told the Lords Economic Affairs Committee on Tuesday May 19 that he was currently sanguine on the prospect for an increase in prices in the near-term, viewing them as likely to be transitory as rising fuel costs should be expected.

The British Pound edged lower in the immediate wake of the release, suggesting the market was potentially wary of a blow-out print as was seen in the U.S. earlier this month, an outcome that would have potentially forced a rethink by Bailey.

"The jump in CPI inflation from 0.7% in March to 1.5% in April was almost entirely driven by energy price effects, which will only be temporary. We doubt a sustained increase in inflation that would concern the Bank of England will happen until late in 2023," says Ruth Gregory, Senior UK Economist at Capital Economics.

We wrote on Monday that data is starting to matter for Sterling exchange rates once more and that the market would be wary of a huge consensus-beating inflation print that would send the currency sharply higher.

But because the data came in more or less on target there might have been some disappointment amongst Sterling bulls and the data is ultimately unlikely to offer any major directional shift for the currency.

The ONS says price movements for household utilities, clothing, and motor fuels are the main reasons for the higher monthly rate this year than a year ago. 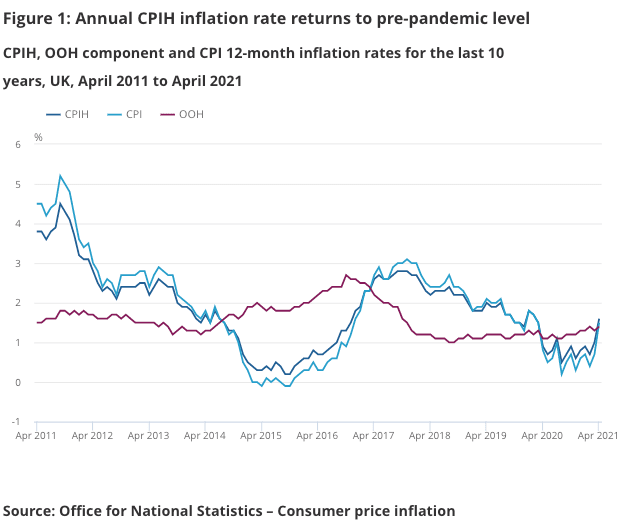 Petroleum products experienced the highest annual growth rate of any component of output prices in April 2021, at 50.3%.

The rise in forecourt prices comes amidst an ongoing rally in global oil prices as demand ramps up in response to a global economic activity.

This is the kind of inflation the Bank of England understands it can do little about and is therefore unlikely to have a bearing on domestic monetary policy, and therefore the currency.

Considering this 'base effect', it must be noted that this month's fuel price component was always going to be sizeable as in April 2020 prices for petroleum products fell by 23.5%, as there was significant fall in demand in the market. 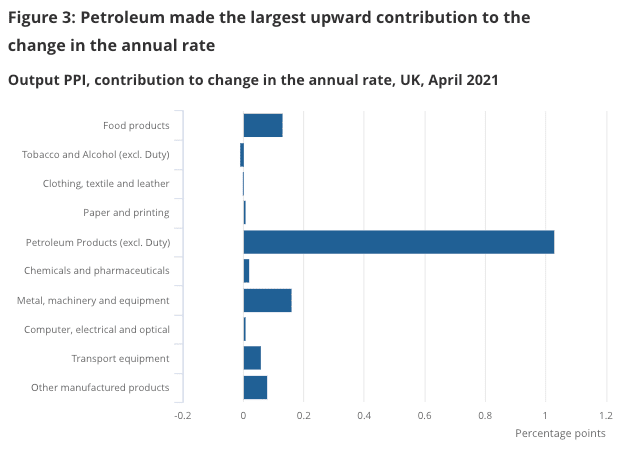 Core inflation - which is something the Bank of England is likely to pay attention to as it excludes energy, food, alcohol and tobacco price changes - only rose from 1.1% to 1.3%.

"If we’re right in thinking the crisis won’t leave a big scar on the economy, then the burst of inflation caused by reopening the economy should prove temporary," says Gregory.

Inflation looks set to rise above the Bank’s 2.0% target later this year for the first time since July 2019.

"But we doubt it will stay there long, as energy-related effects go into reverse next year, “reopening” inflation eases and the stronger pound to pushes down on inflation," says Gregory.

Hannah Audino, economist at PwC says inflation is likely to continue rising up towards the Bank of England’s 2% target over the coming months, as the economy continues to reopen, allowing consumers to unleash some of their excess savings.

"Recent survey evidence suggests that the share of households who plan to spend some of their savings has increased in recent months, as the vaccine rollout boosts confidence," says Audino.

"The rise in the energy bill price cap will also continue to feed through to household energy bills. If inflation does creep up beyond the 2% target, we expect the Bank of England to prioritise supporting the recovery over reducing inflation," she adds.

"While the monthly surge is not the start of a sudden bout of excess inflation, the market should pay attention to the ongoing rise nonetheless," he says.

Berenberg do not believe that higher inflation will be fully transitory as many in markets contend and as global central bankers seem to presume.

Economists at Berenberg anticipate a "great inflation reset" for the global economy which has now reached a turning point after a decade of soft inflationary pressures. 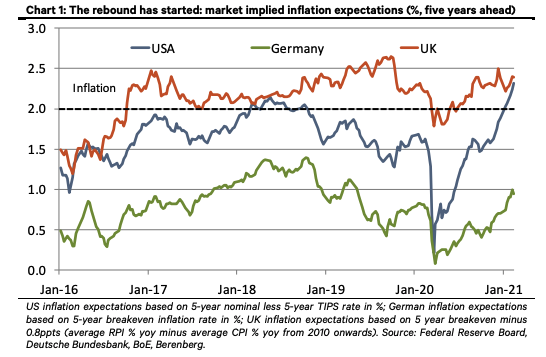 In 2022 Berenberg expects the huge policy stimulus across the advanced world, as well as strong consumer demand at home as households spend some of their excess savings, to drive gains in demand beyond the pace at which businesses can add to supply via investment and hiring.

This will lift producer prices and unit labour costs and keep UK headline inflation modestly above the BoE’s 2% target.

"Thereafter, structural factors such as ageing populations, continued deglobalisation in goods trade and further fiscal activism will reinforce the inflationary dynamic. In the UK, we project sustained core inflation within the 2.5-3.0% range by the middle of the decade," says Pickering.

Such a development would place significant pressure on the Bank of England to raise interest rates to try and put a lid on price rises.

"Held low by the BoE’s aggressive bond purchases, gilt yields across the curve remain far too low relative to the likely outlook for inflation and real GDP growth," says Pickering. "The recent hawkish tilt by the BoE and today’s inflation print should underpin the next – necessary – leg up for bond yields."

Relative moves in bond yields are a significant driver of currencies and if Berenberg are correct and UK bond yields do rise then the Pound could come under some sustained appreciation.

This appreciation would most likely be starkest against currencies where inflation prospects are more contained than they are in the UK.