The British Pound found support on Tuesday mid-morning from official data that showed the UK economy grew 0.3% in December, ahead of expectations for growth of 0.2% to be recorded.

The Pound-to-Euro exchange rate briefly shot higher to 1.1857 after it as also revealed that year-on-year growth stood at 1.1% in the fourth quarter, better than the 0.8% markets had been expecting.

The gains in Sterling, which also saw the Pound-to-Dollar exchange rate shoot higher to 1.2943, were however ultimately quickly reversed and the currency is trading more or less where it was ahead of the release.

This is for the simple reason that today's GDP data is backward looking in nature and does not reasonably capture the sharp improvement in sentiment that was triggered by the December General Election result.

"December saw a stronger than expected 0.3% bounce in GDP, recovering the ground lost in November. In the fourth quarter as a whole, this was enough to keep output flat, although the underlying trend was still for a loss of momentum in the autumn after a stronger performance in the summer. We would expect a revival in growth in the first quarter of 2020 based on improved business and consumer confidence and a stronger housing market," says PwC chief economist John Hawksworth.

It was a sea of green for the British Pound on the global currency performance board at the start of the new week as it rallied against the majority of its peers and confirmed that while there is much anxiety over looming trade negotiations, the currency continues to offer value on any dips.

The Pound had fallen sharply in the previous week and some analysts are saying these gains left it looking like a decent buying opportunity for those with a more constructive view on the UK's outlook.

"We don't think the advent of less frictionless trade with the EU (which the government is already preparing businesses for) is a sufficient reason alone to be shorting the GBP. We're still inclined to look for buying opportunities, particularly vs the EUR," says Stephen Gallo, European Head of FX Strategy at BMO Capital Markets.

The Pound-to-Dollar exchange rate fell to a two-and-a-half month low in the Asian session, before rebuilding back to 1.2943 as the day progressed. It appears that the magnetic qualities of the 1.30 level might once again be at work in a market that might be inclined to trade on technical considerations in light of a lack of fundamental news flow.

The Pound-to-Euro exchange rate is meanwhile decidedly better supported with the currency pair quick to recover back to 1.1837 from the 1.1759 two-week lows triggered last week. 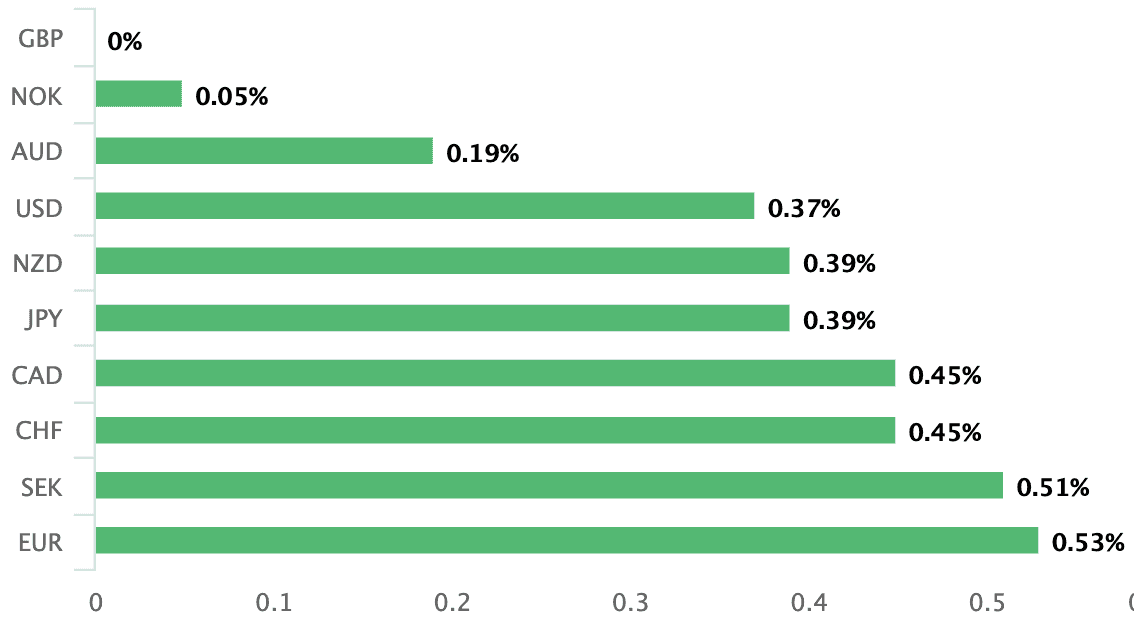 Above: The Pound was the top performing currency at the start of the new week

We will maintain an eye on the jockeying for position between the EU and UK ahead of the official commencement of trade negotiations, which are expected to kick off in March/April.

Headlines have been understandably unsupportive of Sterling as both sides are looking to commence bargaining with some far-out positions, which should ultimately converge on some form of trade deal.

"Our base case remains that the UK and the EU will instead strike a bare-bones deal for some sectors and a number of interim agreements for other key sectors to smooth the UK's exit from the single market at the end of this year. The eventual UK-EU trade agreement will likely be a semi-hard Brexit with 'Canada-minus' deal covering mainly goods trade with little for services or finance," says Kallum Pickering, UK Economist at Berenberg Bank.

While trade negotiations will understandably be a central component of GBP value in 2020, the market will also be keeping an eye on March's budget in which the government is expected to announce an increase in spending that could well support the economy, and the Pound.

"We look for fiscal policy to contribute c0.7ppt to headline GDP growth in 2020, focused on public sector investment aimed at raising productivity in the north of the UK," says Pickering.

Pickering says some of Berenberg's clients have been asking why the Pound has not moved higher, beyond the initial relief rally following the General Election.

"The recent dovish tilt by the BoE and investor caution ahead of the upcoming UK-EU trade talks seem to be overwhelming the rising confidence and pick-up in post-election economic data for now," says Pickering.

However, Sterling and some UK assets are expected to catch a bid going forward. "Looking ahead, further improving economic momentum, the big March 11 budget announcements and a gradually more hawkish tilt by the BoE should lift UK equities, Sterling and gilt yields," says Pickering.

Investors Cut Back on Bets for Sterling Upside

Investors have cut back their bets for further gains in the value of the British Pound amidst signs the market is preparing for tough trade deal negotiations, however one analyst tells us the currency should eventually find some lift.

According to the Commitment of Traders report from the Commodity Futures Trading Commission, there was a net of 12987 contracts looking for Sterling upside, but this is down from the 17689 recorded one week prior.

The Commitment of Traders report is the largest and most reliable insight into how the foreign exchange community is betting on a certain currency. The latest report that covers the turn of the month suggests investors are turning more cautious on the currency following months of gains.

"Investors trimmed their bullish bets on Sterling to the lowest level so far this year. The market seems to be bracing for tough trade negotiations between the UK and the EU in the coming months," says Piotr Matys, EM FX Senior Strategist at Rabobank.

It appears markets are balancing a number of conflicting signals when approaching Sterling: one the one hand there has been a decisive improvement in sentiment in the UK economy following the general election that saw a decisive win for Prime Minister Boris Johnson.

On the other hand, we stand at the cusp of what promises to be a difficult and potentially fractious trade negotiation between the EU and UK.

This should supply the kind of anxiety that would weigh on Sterling, or at the very least keep its ambitions for appreciation in check.

"Last week PM Johnson outlined his vision of a new trade relationship similar to Canada’s or “more like Australia’s” if an agreement with the EU cannot be reached. The short-term technical bias has shifted to the downside," says Matys.

Francesco Pesole, FX Strategist at ING says the market's shift away from favouring bets on Sterling strength comes "largely on the back of rising concerns around the future of the future EU-UK trade relationship".

Matys says that with the Pound trading softer against the Euro and U.S. Dollar and uncertainty about the trade negotiations mounting, "it seems like the positioning gauge (now at +6% of open interest) may soon find its way back into net short territory."