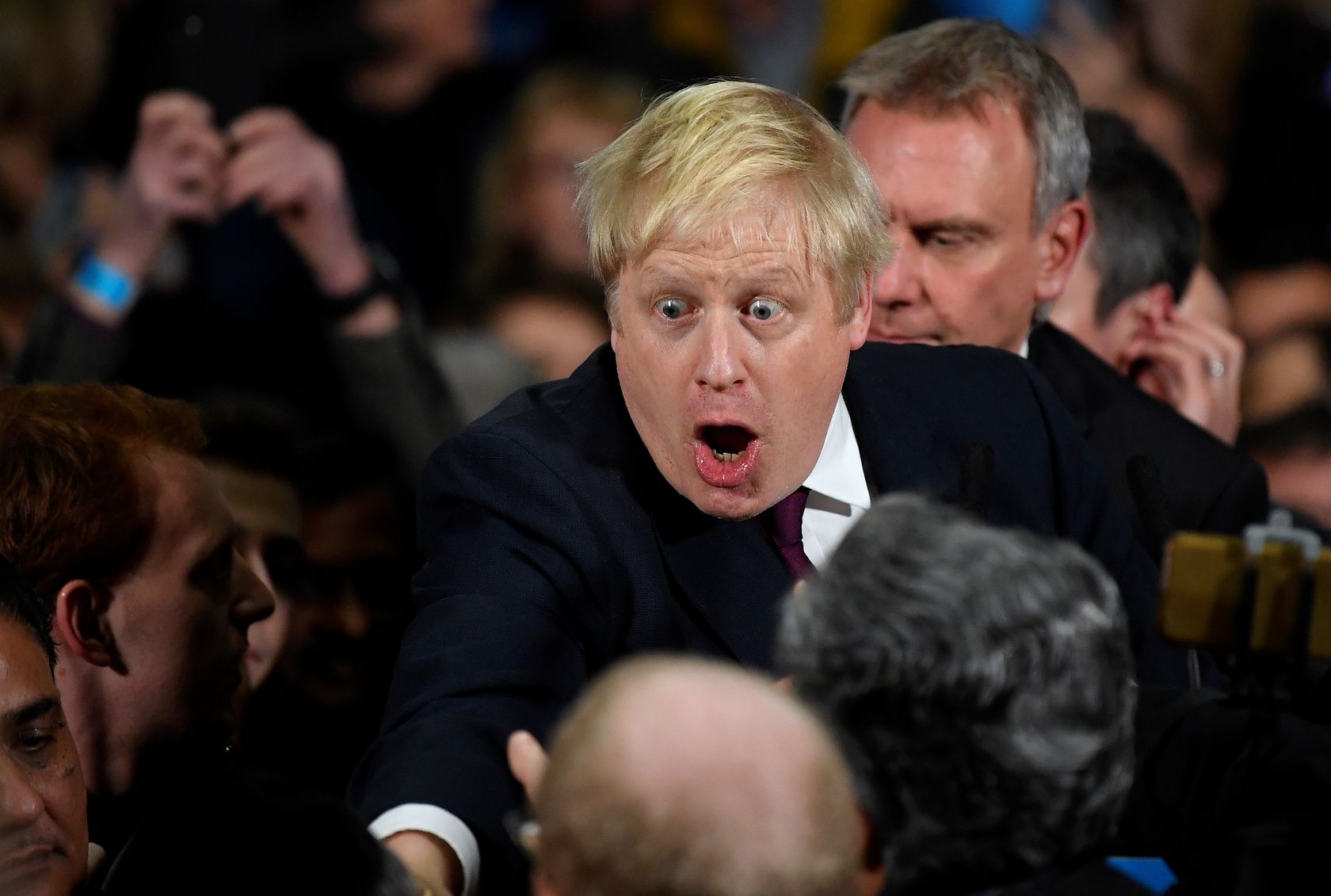 - Sterling can move higher in the short-term

The British Pound is seen giving back some of its recent multi-month highs as investors book profit on what has been weeks of stellar gains for a currency that had, in truth, always been positioned for a healthy Conservative majority.

With all but one seat now declared, the party of Boris Johnson has secured a majority with 364 seats against Labour's 203 seats and projections suggest the Government will enjoy an 80 seat majority once the final result is in. The Pound shot higher and recorded multi-month highs against a host of major currencies following the release of an exit poll at 10PM on December 12 that predicted the scale of the victory.

However, ahead of the weekend Sterling has pared back some of the advance, and it appears the markets is undergoing a classic 'buy the rumour, sell the fact' reaction to the events of the past 24 hours, with traders opting to pare back exposure after this week's strong gains.

Martin Lund, an analyst with Nordea Markets, said he expected the Pound to fall in the wake of the Conservative victory, as this expectation had been absorbed well into the value of Sterling before the results were announced. Those following Pound Sterling Live over the past two weeks will recall we had been following the implied odds for a Conservative majority on the betting markets, and the odds tended to hover around the 70% mark during this period.

"We like to 'fade the optimism' around a strong Conservative election result. Buy the rumour, sell the fact," says Lund in a recent note to clients.

"Thursday and Friday should be choppy sessions and subject to liquidity vacuums," says Stephen Gallo, a currency market strategist at BMO Capital. "We do not think it's clear whether a Conservative majority that is 'off the scales' and in the 60-100 seat range would be GBP-positive or GBP-negative on the day... we can see multiple reasons as to why rallies in GBP/USD and EUR/USD should ultimately be faded."

Despite Friday's declines, the Pound remains near its strongest level in months against the Euro and Dollar, having rallied sharply overnight after the Conservatives won a solid majority, and while the currency has found a temporary ceiling we do see the potential for further gains to be made over coming hours and days as global financial markets cheer the prospect of political stability returning to the UK.

The Pound pushed higher to record its best level since May 2018 against the Dollar following the result, with GBP/USD hitting a high of 1.3507.

The Pound recorded a 3-year high against the Euro when the GBP/EUR exchange rate rose to 1.2080 in the wake of the results. 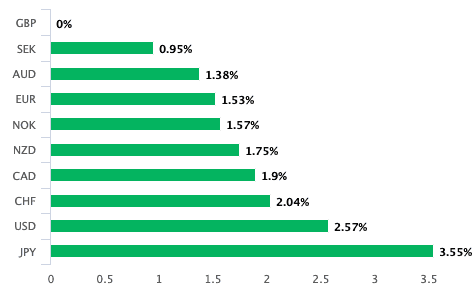 Above: Sterling's gains so far this week.

"In a novel change for markets, this morning’s political developments have seen Sterling climb up a cliff instead of falling off one. Boris Johnson’s commanding majority has a number of implications for the Pound, but important questions remain unanswered and so, for now, Sterling’s rally may struggle to extend much further," says Ranko Berich, Head of Market Analysis at Monex Europe.

The Pound is the primary gauge of international investor sentiment towards the economy, and the rise in the currency this week can be seen as an effecitve vote of confidence by investors who will welcome the elimination of Brexit uncertainty while expressing relief that the decidedly left-wing economic policies promoted by the Labour Party have been avoided.

"The overwhelmingly impressive election outcome basically eliminates a multitude of political imponderables in the UK, at least for the time being. Consequently, the probability of an interest rate cut by the Bank of England is likely to decrease within the foreseeable future. Sterling can be expected to become considerably more resilient, primarily due to decreasing political risks. Yet, the GBP's upside potential may be limited as the forthcoming trade negotiations with the EU are likely to be anything but hassle-free," says Marc André Fongern, EMEA FX Analyst at MAF Global Forex. 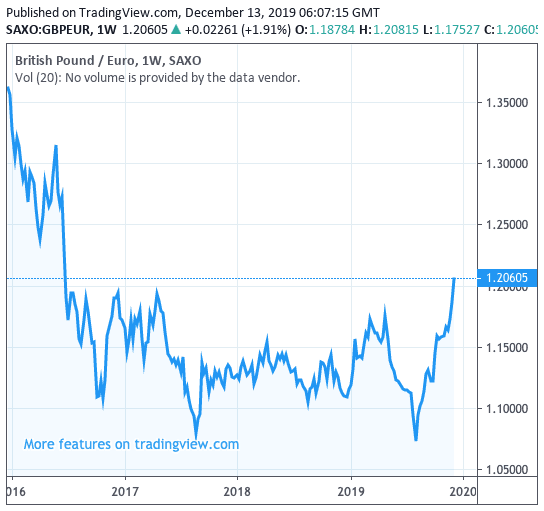 Above: Sterling is at its highest level against the Euro since the EU referendum.

Momentum is nevertheless expected to remain in Sterling's favour over coming days now that key technical levels have been broken and significant fundamental volatility has been washed away.

"The Pound has enjoyed its biggest surge in a decade on the hopes that a solid Conservative majority can finally end the Brexit deadlock," says Nigel Green, chief executive and founder of deVere Group, a financial management company. “Many traders were caught off guard by the size of the majority and this may push the Pound even higher than previous predictions. We could see bullish traders now take it to $1.38 or maybe even as high as $1.40,” says Green.

Such a move in GBP/USD would likely provide tailwinds for other Sterling exchange rates, including GBP/EUR and GBP/AUD.

"Sterling topped out at 1.3514 in the overnight, and while it may be a buy on dips going forward, for today, we think we could easily have a meaningful pullback first as profit-taking takes hold," says Jacqui Douglas, Chief European Macro Strategist at TD Securities.

Monex Europe's Berich says Sterling could find a temporary ceiling as Johnson now has a wealth of options for dealing with the EU, but the trajectory of trade talks remains a major unknown factor for Sterling at the moment. "How far Sterling can continue to rally over the next 12 months will depend on how much momentum the economy can regain."

"With a stronger hand for dealing with eurosceptic hardliners, Johnson is in a position to offer concessions for a free trade deal, such as the border in the Irish Sea that enabled his withdrawal agreement breakthrough. But a strong majority could prove a double edged sword for Sterling as the new Government could decide its majority means it has a strong hand for hardball tactics with the EU," addss Berich.

Sterling Can Still Go Higher if Economy Finds its Feet

Foreign exchange analysts say the outlook for Sterling in 2020 now depends on how the stability provided by the election result translates into economic growth, if the economy can find its feet and start delivering strong growth rates, the Pound can be expected to trend higher over coming months.

"With more political certainty due to the large majority, the UK economy is also likely to receive an election bounce," says deVere's Green. "Billions of Pounds in business investment that has been on the sidelines due to the parliamentary paralysis is now ready to be unleashed. This will give a much-needed boost the slowing British economy."

Kallum Pickering, an economist with Berenberg Bank says the big win for the Conservatives now sets the stage for a UK economic rebound.

"An orderly Brexit can lift confidence and spending in the next two years after more than three years of heightened uncertainty and gradually softening momentum," says Pickering.

"As the implications of the election result become clearer, we expect consensus to shift up a little in the coming week," says Pickering.

Inflation is meanwhile forecast to rise over the medium-term with Berenberg forecasting inflation to gradually drift above the Bank of England’s 2% target towards the end of 2020, lifted by higher wage growth and stronger consumer spending.

The improving economic dynamics should in turn prompt the Bank of England to raise interest rates, with Berenberg seeing a hike towards September 2020 and another by the time 2021 is done.

Higher interest rates would meanwhile be typically expected to support the Pound.